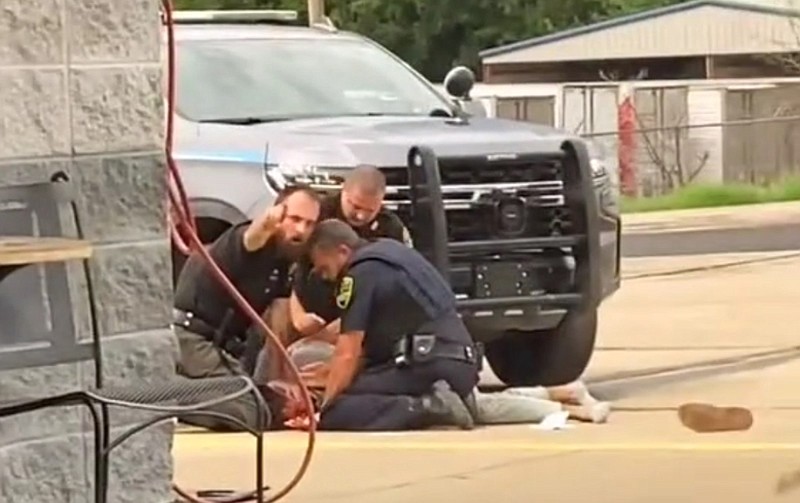 A law enforcement officer gestures toward a person recording the arrest of a man in Crawford County in this screenshot from a video recorded Sunday, Aug. 21, 2022. Crawford County Sheriff Jimmy Damante said the video shows two of his deputies and a Mulberry officer. (Courtesy Naomi Ruth Johnson, anthonyjohnson520; tiktok.com/@anthonyjohnson520/video/7134407649956777259)

VAN BUREN -- The two Crawford County sheriff's deputies shown holding down and beating a man in a viral video in August have been terminated from their positions.

Linda Phillips, administrative assistant for the sheriff's office, confirmed Thursday that Zack King and Levi White had been fired between one and two weeks ago. She couldn't provide a exact date for the firings nor the reasoning behind them.

Sheriff Jimmy Damante didn't return messages requesting comment Thursday. He told television station KHOG/KHBS his decision was for the betterment of his department, as well as the community.

King and White had been suspended with pay after they, along with officer Thell Riddle of the Mulberry Police Department, were recorded using force while arresting Randal Worcester, 27, of Goose Creek, S.C., about 10:40 a.m. Aug. 21 outside the Kountry Xpress convenience store off Interstate 40 in Mulberry. The video showed the officers repeatedly punching and kneeing Worcester, as well as telling a bystander to get away from the scene.

One of the officers, identified as White in a federal civil-rights lawsuit Worcester filed Aug. 29, was also shown slamming Worcester's head to the pavement.

Damante said Aug. 25 he directed his staff to begin a "thorough, disciplinary investigation" into the deputies' actions and would publicly announce any action he takes after the investigation.

Adam Rose of the law offices of David L. Powell in Fort Smith, one of the attorneys representing Worcester alongside Powell, said he believed justice was done concerning the deputies' terminations.

"I think their career in Crawford County, letting them go was the right thing to do, and I think it's just the first step of many in the right direction for Randal Worcester and the Crawford County community as a whole," Rose said.

The other cases pertain to two clients Jernigan claimed in a TikTok video and news conference in August were "attacked" by deputies within about the past month. She identified White as being involved in both instances.

Attorney Emily White has said she was appointed as special prosecuting attorney for the Arkansas State Police's independent investigation into the use of force.

The U.S. attorney's office for the Western District of Arkansas, the Department of Justice and the FBI's field office in Little Rock also opened a civil-rights investigation into the incident, according to authorities.