Uncertainty for Dreamers remains after court ruling by Compiled by Democrat-Gazette staff from wire reports | October 7, 2022 at 4:38 a.m. 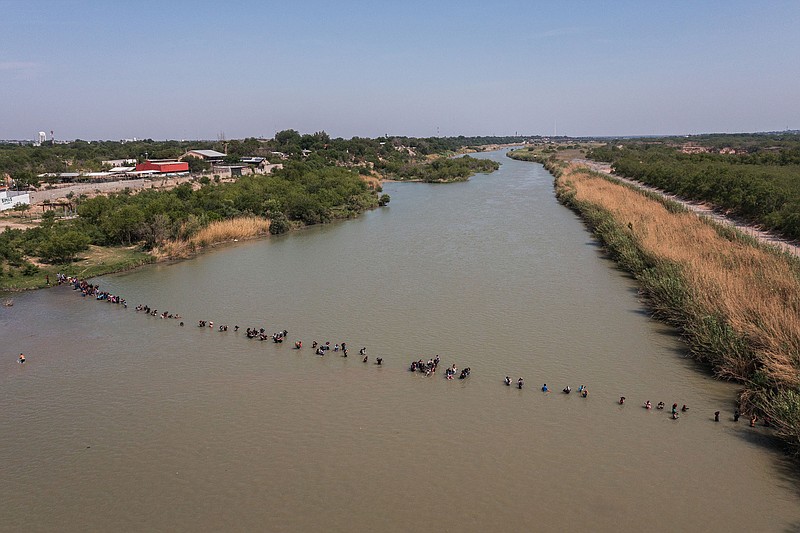 A large group of immigrants crosses the Rio Grande into Eagle Pass, Texas, in May. Despite record numbers of arrivals in recent months, border stations right now are largely free of such chaotic scenes. (The New York Times/Tamir Kalifa)

WASHINGTON -- An increasingly divided nation can't agree on what a long-term fix to its immigration system should look like -- basic questions like should there be more immigrants coming in, or fewer? And despite the Biden administration's efforts, the future of key policies lies not with the White House or in the outcome of the midterm elections, but with the courts.

Just Wednesday, a federal appeals court ruling left in limbo the fate of more than 600,000 immigrants known as Dreamers who came to the U.S. as children. President Joe Biden said he would do everything to help them but cautioned it wasn't all up to him.

"While we will use the tools we have to allow Dreamers to live and work in the only country they know as home, it is long past time for Congress to pass permanent protections for Dreamers, including a pathway to citizenship," Biden said.

At a recent White House ceremony honoring Hispanic heritage in the U.S., the president spoke of how immigration has defined the nation and should be celebrated.

"We say it all the time, but that's who we are," Biden said. "That's the nation. We are a nation of immigrants."

Biden pledged himself to "fixing our immigration system for good." He's tackling near-term issues like reuniting migrant families separated during the previous administration and addressing clogs in the asylum system. And border officials have worked to reduce the chaos along the U.S.-Mexico line.

But the political backdrop to all the overall challenge is stark.

One in three U.S. adults believe an effort is underway to replace native-born Americans with immigrants for electoral gains, according to an AP-NORC study. Some Republicans running for Congress are using midterm campaign ads to warn of a coming "invasion." And some GOP leaders have taken to busing or flying border-crossers to Democratic-led areas as a political play to raise awareness of what they claim is ongoing mayhem at the border.

Democrats, for their part, say they want to create a pathway to citizenship for hundreds of thousands of immigrants who came here as children, and they want policies that reflect the U.S. role as a haven for those fleeing persecution. But even they can't agree on what that should look like.

And all the while, economists say the country needs more workers, not fewer, to meet its labor needs.

Biden, who inherited a hardened system oriented by former President Donald Trump toward keeping immigrants out, has undone many of his most contentious policies. He's worked to speed up the handling of asylum cases and boost the number of refugees allowed into the U.S.

And despite record numbers of arrivals in recent months and all of the overheated campaign ads, border stations right now are largely free of the chaotic scenes that in past years sparked anger -- migrants huddling under a bridge or small children packed behind fences.

Congress has repeatedly tried -- and failed -- to improve the nation's tattered immigration system, chasing various proposals through the House and Senate only to see them collapse, often spectacularly.

Despite the latest court ruling on Dreamers, it's doubtful Congress will be able to pass any substantive legislation to protect a new generation of immigrants the way the Deferred Action for Childhood Arrivals program provided a route to legal status a decade ago in the Obama administration.

House Speaker Nancy Pelosi, D-Calif., pointed to the most recent bills that have been approved by the Democratic-run House but languished in the Senate, where Republicans are able to filibuster to block bills in the evenly split chamber.

"House Democrats have twice passed the Dream and Promise Act: to finally offer Dreamers a permanent pathway to citizenship," Pelosi said. "Senate Republicans must join us to immediately pass this urgent, necessary, House-passed legislation and send it straight to President Biden's desk."

With action in Congress unlikely, the president is going to have to find ways to innovate if he wants to improve on the status quo, advocates say.

Thomas Saenz, president and general counsel of the Mexican American Legal Defense and Educational Fund, acknowledged the "very real and undeniable challenges" that Biden is facing, particularly as migrants arrive in record numbers. But he says the administration is falling short in meeting the moment.

"I have found this administration, particularly the White House, to be not creative nor open to creative approaches to provide relief," he said, talking about migration issues that extend beyond the border.

Debate about the Dreamer program has dragged on so long that many of those children are now in their mid-30s with children of their own who are U.S. citizens. And the limbo continues after Wednesday's court ruling.

If the program is ultimately ended by the courts, Biden is weighing executive action to provide some safeguards to the Dreamers, according to administration officials familiar with the plan who spoke to the AP on condition of anonymity to discuss preparations.

The Trump administration claimed the Deferred Action for Childhood Arrivals program was denying jobs to Americans by allowing migrants to supplant them. That idea has been disproved by economists and the view isn't shared by a majority of Americans. Two-thirds feel the country's diverse population makes the U.S. stronger, and far more favor than oppose a path to legal status for the program recipients, according to AP-NORC.

But the deep anxieties expressed by some Americans help explain how the issue energizes those opposed to immigration. And the idea of disarray at the U.S-Mexico border also animates those on both sides of the debate.

Even as officials encounter more migrants than ever at the border, there's a lull right now in the type of shocking turmoil that has defined the past few years.

U.S. Customs and Border Protection officials say changes to their processing system deserve at least part of the credit for increased efficiency and improved communication with Mexican officials on when and where migrants are coming.

"There is a lot of really thoughtful, detailed and careful work that's being done to manage this flow," said Commissioner Chris Magnus. He said migrants are vetted and screened rigorously, and careful steps are taken to make sure they are going into proper immigration pathways.

Critics, including some Democrats, say the administration is letting too many people into the country and should be either deporting or detaining more.

Overall, migrants have been expelled 1.8 million times since the beginning of the pandemic under the emergency health authority known as Title 42, which allowed the government to immediately deport asylum-seekers as long as their countries were considered safe.

Although Biden in late March agreed to end the program, it has continued for now under a court order.

Sergio Gonzales, executive director of the Immigration Hub, a nonprofit that advocates for immigration reform, said that whether the rule ultimately stands or falls, migrants will continue coming to the border because they're living in impoverished, dangerous countries and making a calculus that staying is worse than the journey, "even though there is a danger in that too."

The U.S. is still trying to atone for the Trump-era family separations in which as many as 5,500 children were taken from their parents. So far, only about 600 families have been brought back together, in part because of considerable roadblocks thrown up under Trump.

Lee Gelernt, an American Civil Liberties Union lawyer who sued over the separations and is managing the reunifications, said that while the Biden administration has been "constructively working" to reunite families, he worries that the separations -- international news when they happened -- have been largely forgotten. "The truth is, there are still hundreds of little children who are not back with their parents."

A federal appeals court panel ruled Wednesday that the Deferred Action for Childhood Arrivals program is illegal, but allowed those already enrolled to renew their status -- in essence keeping the status of the program unchanged but its future uncertain.

The decision from the 5th U.S. Circuit Court of Appeals -- one of the country's most conservative federal appellate courts -- affirmed a 2021 lower-court decision. The administration will need to continue its legal fight to enroll new applicants in the program.

The judges sent the case back to U.S. District Court in Houston to consider a new administration policy issued in August to protect the program. The new regulation was intended to take effect at the end of the month.

Immigration advocates said the ruling signaled that the only chance for the program to survive was for Congress to pass a law to protect young immigrants, something it has been unable to do for more than two decades.

"This decision makes 100% clear that the options for preserving DACA [Deferred Action for Childhood Arrivals] in the courts are dwindling and essentially nonexistent at this point," said Jess Hanson, a staff lawyer at the National Immigration Law Center. "We really need Congress to step up."

President Barack Obama created the program through executive action in 2012 after years of inaction in Congress to provide permanent protection to immigrants who were brought to the country as children.

It was intended as a stopgap measure to provide hundreds of thousands of young immigrants protection from deportation. The protection lasts two years at a time and is renewable, but it does not offer a path to citizenship.

In June 2020, the U.S. Supreme Court ruled against the Trump administration's decision to terminate the program. The court did not rule, however, on whether the program had been legally adopted. One of Biden's first actions in office was to strengthen the program. But the 2021 Texas court ruling renewed the uncertainty surrounding it.

On Wednesday, the judges wrote that while they agree with the lower court that the program is not legal, they "also recognize that DACA has had profound significance to recipients and many others in the 10 years since its adoption."

The Justice Department was working with the Department of Homeland Security on a response to the ruling.

Information for this article was contributed by Colleen Long and Lisa Mascaro of The Associated Press and by Eileen Sullivan of The New York Times. 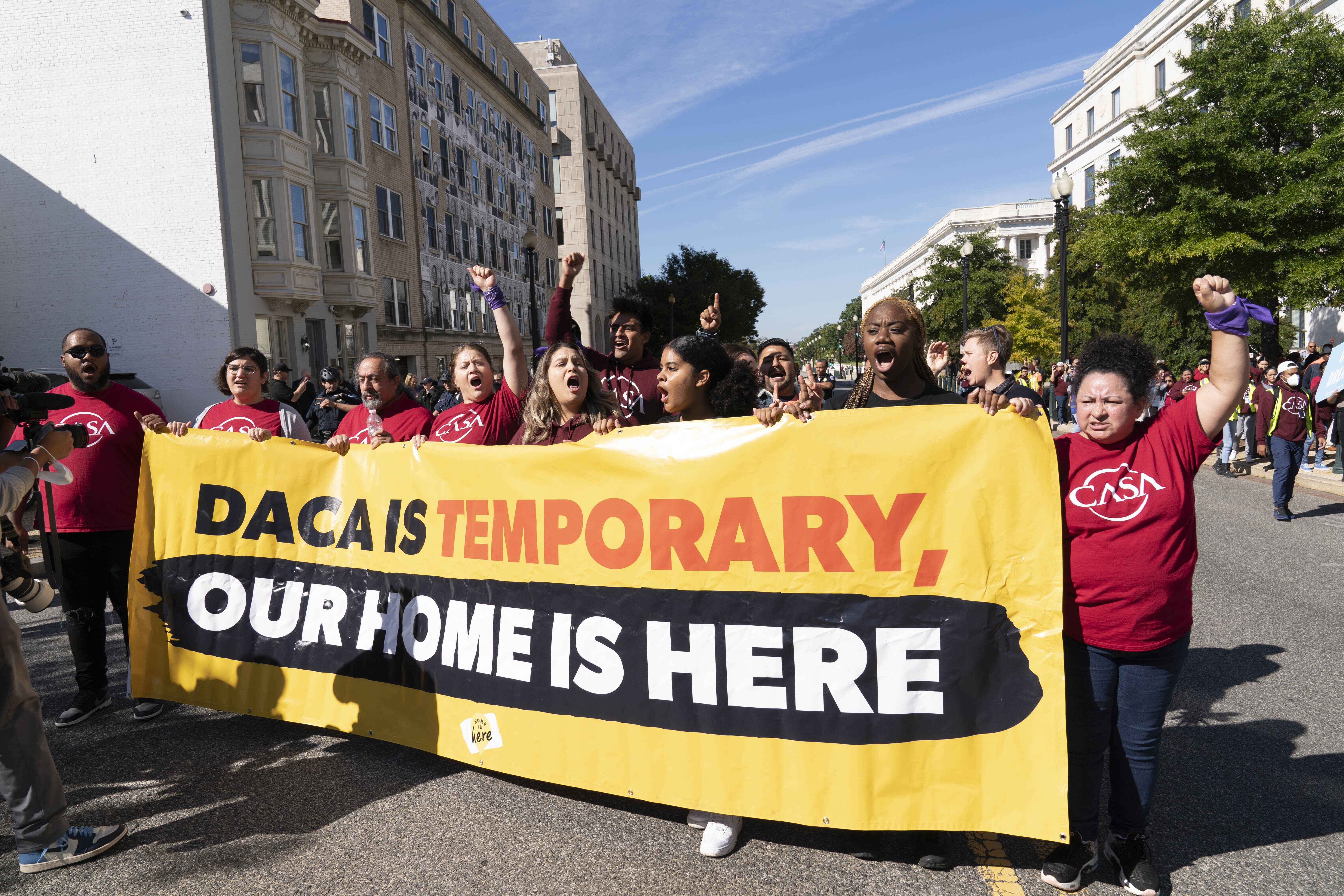 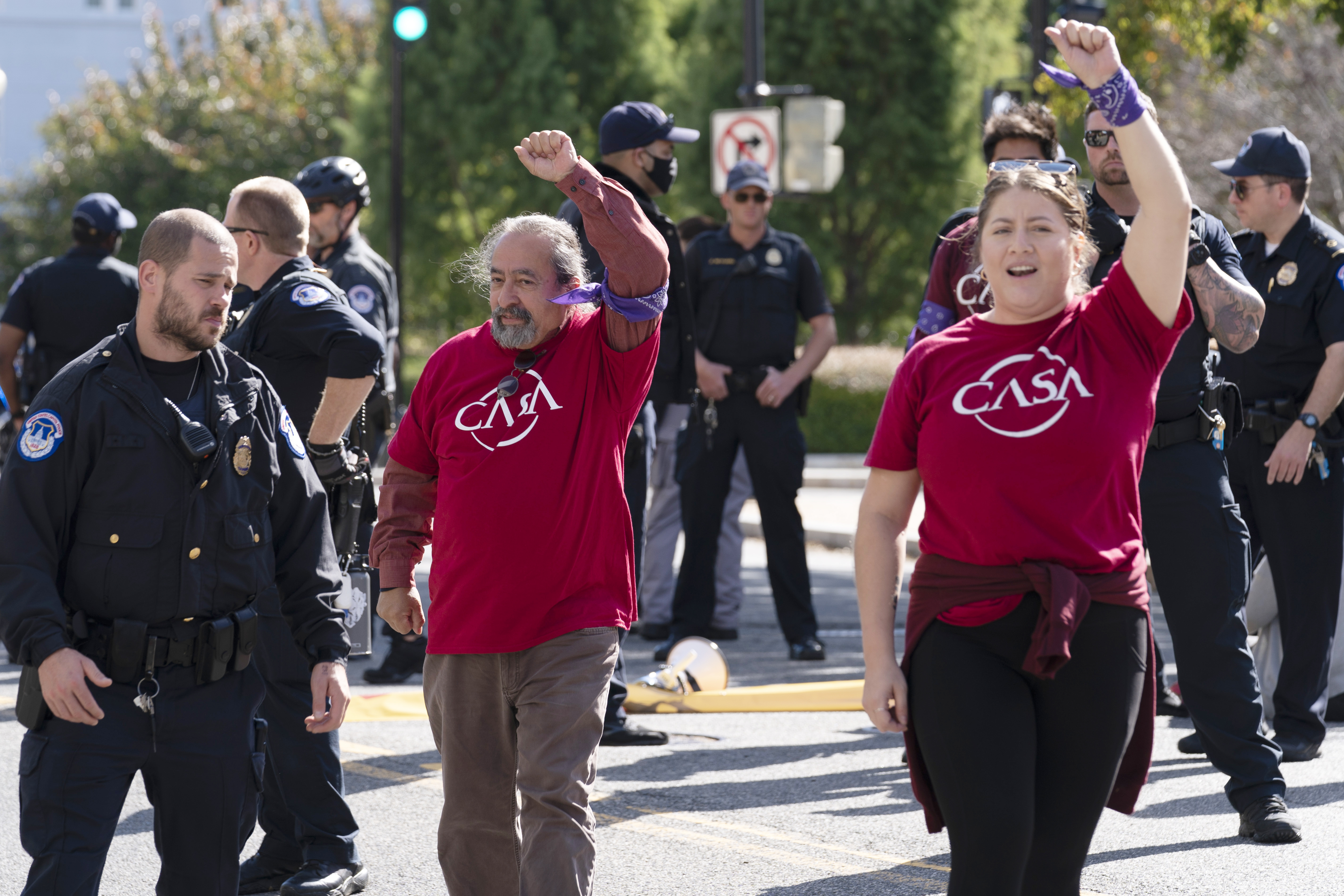 Demonstrators are arrested by U.S. Capitol Police as they protest in support of the Deferred Action for Childhood Arrivals (DACA), during a demonstration on Capitol Hill in Washington, Thursday, Oct. 6, 2022. ( AP Photo/Jose Luis Magana) 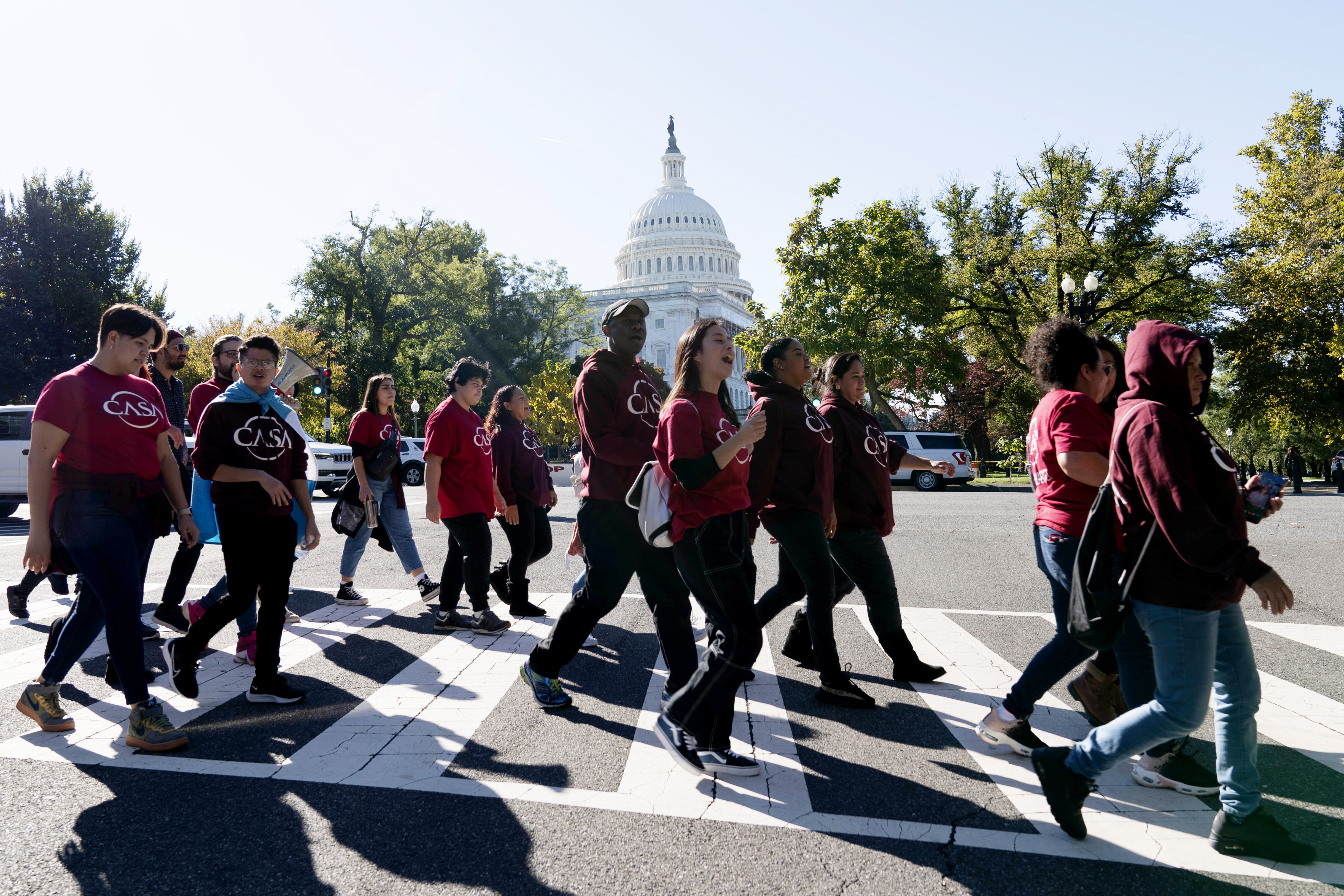 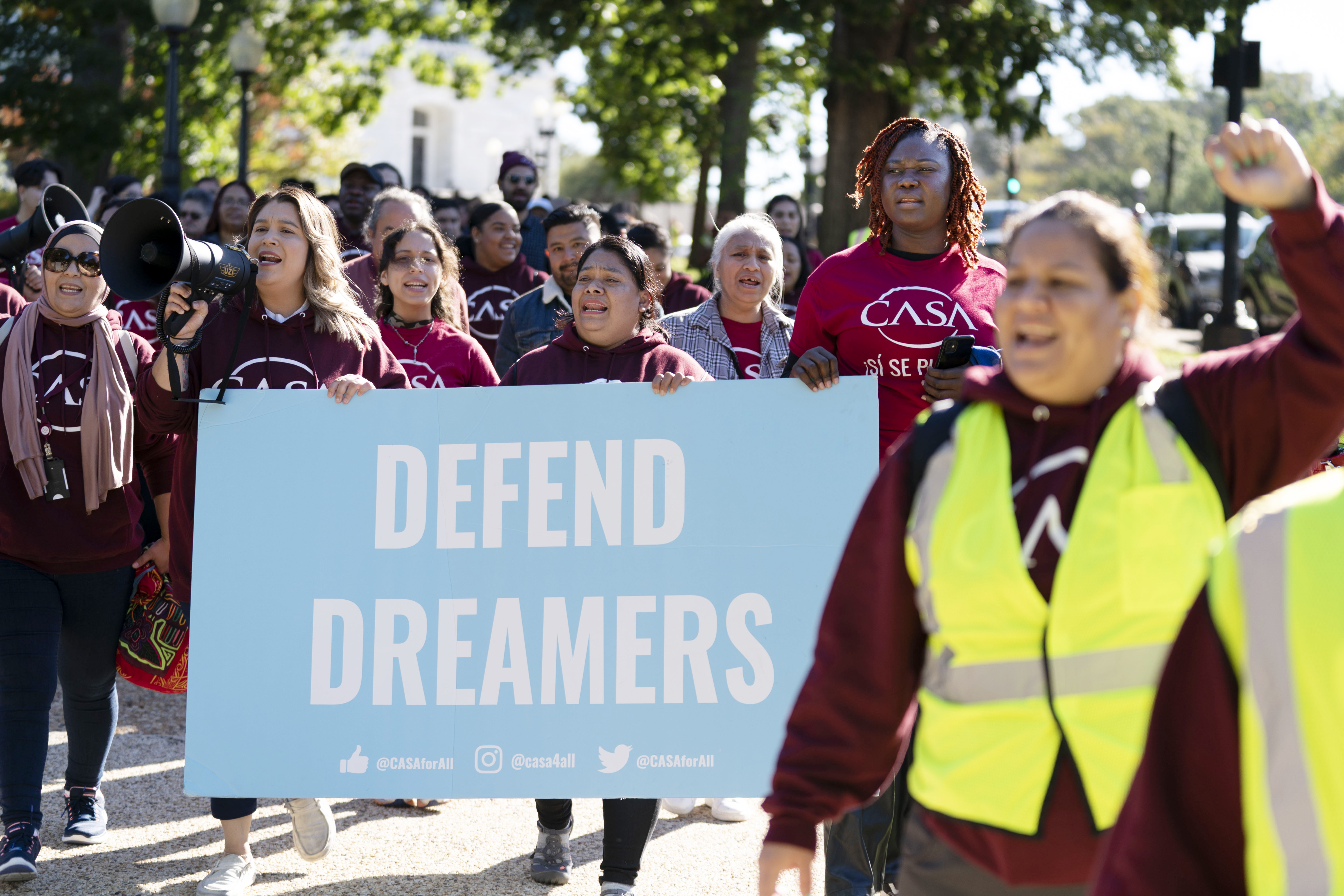 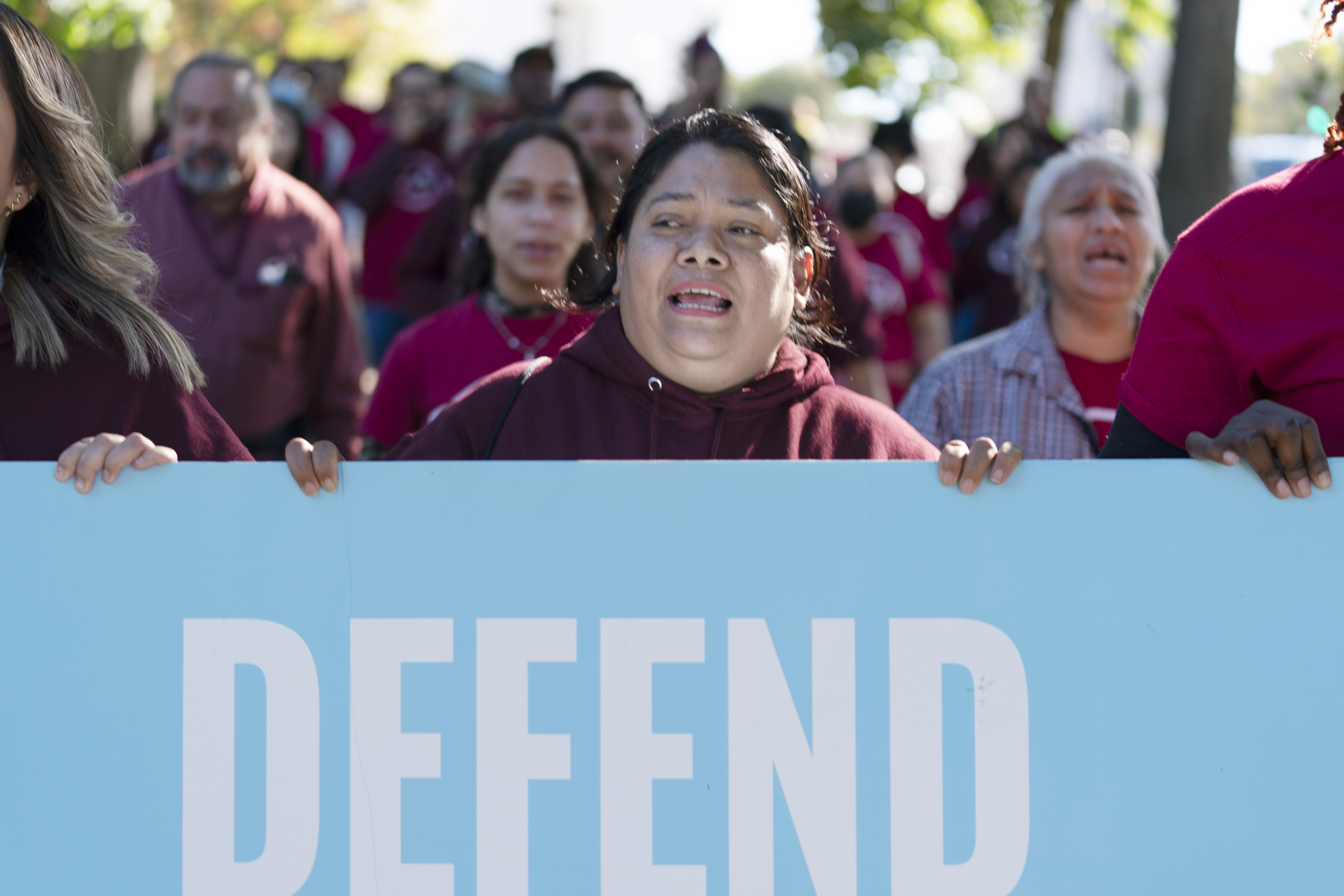 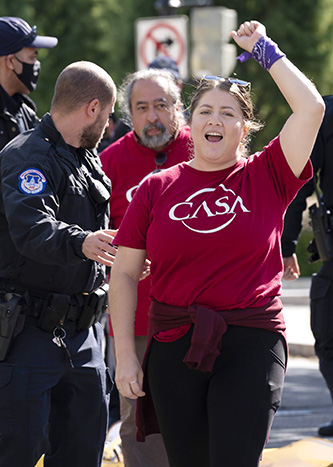 U.S. Capitol Police arrest a protester Thursday at a demonstration in support of the Deferred Action for Childhood Arrivals program. A recent court ruling has left in doubt the fate of more than 600,000 immigrants in the program. (AP/Jose Luis Magana)