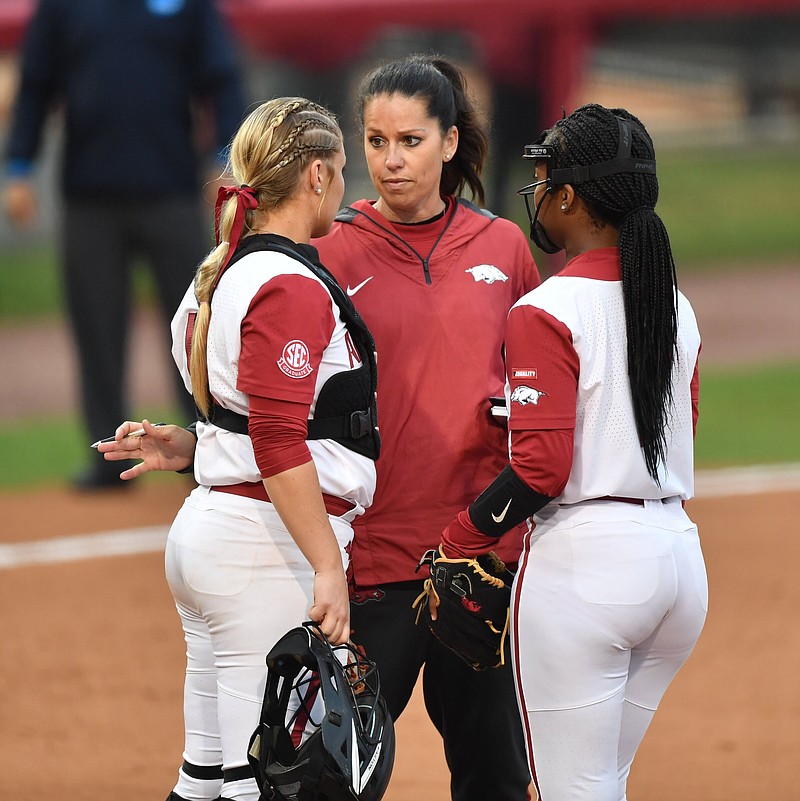 Arkansas coach Courtney Deifel speaks to catcher Taylor Ellsworth and pitcher Chenise Delce Thursday, May 26, 2022, during the fifth inning of the Razorbacks? 7-1 win over Texas in the Fayetteville Super Regional at Bogle Park in Fayetteville. (NWA Democrat-Gazette/Andy Shupe)

But they are just a couple of a roster full of newcomers for the Razorbacks, who finished 48-11 last season, won the SEC regular-season and tournament titles, and fell one game shy of reaching the Women’s College World Series for the first time.

“We are expecting them to step right on the field and they’ve elevated our program,” Deifel said. “Our freshman class is very talented. We’re very young, but they’re talented. We have three freshman pitchers. That was kind of the question mark for me going into the fall: ‘What are they going to look like?’ “And they have been very impressive this fall so far. This team is very different from the team we had last year, teams we’ve had in the past. We have a lot of talent. They are highly, highly competitive and so right now it’s just getting them to focus on the little things every day that added up to big things.

“I think that’s the biggest lesson you always have to kind of go through with a young team.” An incoming signing class of nine freshmen has already earned accolades as the top-ranked recruiting class in the country by Extra Innings Softball and eight of the nine are ranked in the top 30 in Extra Innings Softball’s Elite 100.

Fans will get a chance to see the group in exhibition games Saturday and Sunday at Bogle Park. Arkansas plays a doubleheader each day, facing defending Conference USA regular-season champion Louisiana Tech at 1 p.m. and 3:30 p.m. on Saturday. The Hogs will round out the weekend Sunday with an 11 a.m. contest against Louisiana Tech and then a 2 p.m. game versus Missouri Southern State.

Both Foreman, a senior, and Halvorson, a junior, are listed as utility players. Deifel said she isn’t exactly sure where they will play yet. and that’s what she hopes these fall games will sort out.

“Playing four games this weekend, you will see a lot of combinations,” Deifel said. “I don’t know exactly where everyone’s going to fall … I’m not sure the exact way to put the puzzle together yet. I just know we have really good pieces.” She did say junior Hannah Gammill, who started all 59 games last season at third base and first-team All-SEC pick and all-defensive team honoree, will likely move behind the plate. She hit .374 with 18 homers, which ranked second on the team, and 51 RBI.

“She’s exceptional back there,” Deifel said. “We’ve all really enjoyed watching her play third the last couple years. So when people here, ‘Oh we’re going to move her behind the plate.’ I think they think we’re crazy.

“She is an exceptional catcher. So right now, I don’t see how we don’t do that.” Senior pitcher Chenise Delce made a huge splash after transferring to Arkansas a year ago by earning SEC Pitcher of the Year honors. Delce dominated SEC play, posting the second-lowest ERA (1.87) and leading the conference in saves (3), while ranking second in wins (9) and opposing batting average (.207), third in strikeouts

(84) after playing at Tulsa for three seasons.

Deifel said she plans to use all five pitchers on the staff, anchored by Delce .

She also singled out freshmen Hannah Camenzind, Nikki McGaffin and Robyn Herron as pitchers who should make a difference.

“The thing I really love about the staff is they’re all very, very different,” Diefel said. “What their bread and butter is they do really well. So we’ve seen that be very effective against our offense.” But this weekend will give Deifel the chance to give them a look against outside competition. The staff includes three lefties and two right-handers, so they can give some different looks for sure, Deifel said.

“We’ll see how a lot of those things we’ve been working on so far, how those are going to actually play with another opponent,” she said. “But I think they’ve done really well thus far.”