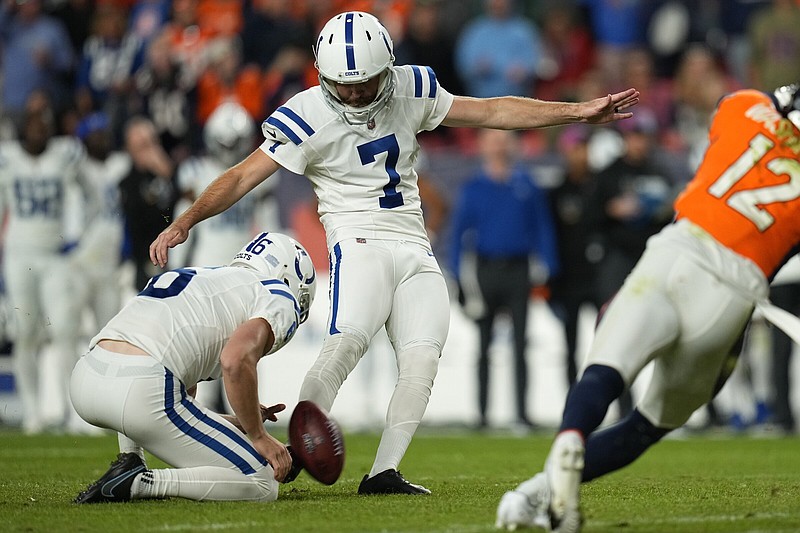 Chase McLaughlin’s 48-yard field goal in overtime proved to be the game winner Thursday as the Indianapolis Colts beat the Denver Broncos 12-9 in Denver. (AP/Jack Dempsey)

DENVER -- Stephon Gilmore batted away Russell Wilson's pass to Courtland Sutton in the end zone on fourth-and-1 from the 5 to give the Indianapolis Colts a 12-9 overtime victory over the Denver Broncos on Thursday night.

"Isn't it awesome you can have a game like that and still win," Reich said.

McLauglin connected from 47 yards 4:10 into overtime to give the Colts (2-2-1) the lead in the first game in NFL history that pitted quarterbacks with at least four Pro Bowl appearances each yet featured zero touchdowns.

The Broncos (2-3) decided against a tying chip-shot field goal by Brandon McManus or even a first-down play on fourth-and-less-and-a-yard from the 5, and Wilson lined up in the shotgun next to running back Melvin Gordon, then threw incomplete over the middle.

"We wanted to win the game," Broncos Coach Nathaniel Hackett said. "We hadn't moved the ball very well the whole night and I though we had a spectacular drive to get all the way down there."

Wide open and uncovered -- but unseen by Wilson -- was KJ Hamler, who tore off his helmet and slammed it to the ground after Wilson's final pass was batted away, sending the Broncos and their awful offense to their second loss in four days.

"There's going to be a bunch of what-ifs," Broncos guard Dalton Risner said. "You know what, if we score that touchdown, everyone thinks it's the best call in the world."

Matt Ryan managed to lead the Colts to victory despite throwing two interceptions into the hands of safety Caden Sterns, fumbling for the 10th time this season and getting sacked six times, giving him 21 so far.

Although there were a half dozen fumbles in the game, none were recovered by the defense.

McLaughlin sent it to overtime with a 31-yarder with 5 seconds left in regulation after Gilmore intercepted Wilson's pass to Jerry Jeudy in the end zone on third-and-4 from the 13.

That kick capped the Colts' longest drive of the night, 68 yards in 10 plays.

The Colts won the overtime coin toss and Ryan drove them into field-goal range again.

Many fans were wondering if this game would be one of revenge -- Phillip Lindsay returning to his hometown to beat the Broncos -- or redemption -- Gordon atoning for his big fumble Sunday that was returned 68 yards for a touchdown by the Raiders.

It turned out to be neither.

Lindsay ran for 40 yards on 11 carries ad Gordon had 54 yards on 15 carries, but he was flipped by safety Rodney McLoyd Jr. at the 6 on his way to the end zone when it appeared he had an open path to the winning touchdown.

Sterns picked off two of Ryan's passes, the second one leading to a 45-yard field goal and a 9-6 lead with 3:19 left in the third quarter. But the boobirds were out again at Empower Field after Andrew Beck dropped a touchdown pass two plays after Sterns' second interception.

The prime-time game was a streaming snooze-fest pitting veteran quarterbacks struggling with their new teams, both of whom were missing their best running back and several key defenders.

It looked like neither team practiced much during the week because neither team did as they worked in new running backs and replaced key defenders on a short work week.

And as is common on Thursday nights, there was a rash of injuries with the most serious to Indy's Kwity Payne (leg) and Denver's Garett Bolles (right knee), both of whom were carted oft.

The only scoring before halftime came on field goals of 33 and 44 yards by McManus and a 52-yarder by McLaughlin with 12 seconds left before the break.

McLaughlin's 51-yarder tied it in the third quarter, and Grover Stewart preserved the tie by blocking McManus' attempt from 34 yards after Courtland Sutton's 51-yard catch in which he wrested the ball from teammate Montrell Washington.

With reigning NFL champion Jonathan Taylor (ankle, toe) out for Indy and the Broncos lamenting the loss of Javonte Williams to a shredded right knee, the grind-it-out nature of the game was entirely expected.

The Colts came in averaging 14.3 points a game, the lowest in Ryan's 16-year career, and the Broncos entered the night averaging 16.5 points, the worst in Wilson's 11-year career.

Nyheim Hines got the start for Indy, but he went out with a head injury after his third snap when D.J. Jones knocked him down and Hines' helmet bounced on the ground. He wobbled as he tried to leave the field on his own and had to be guided to the sideline, where he was evaluated for a concussion. 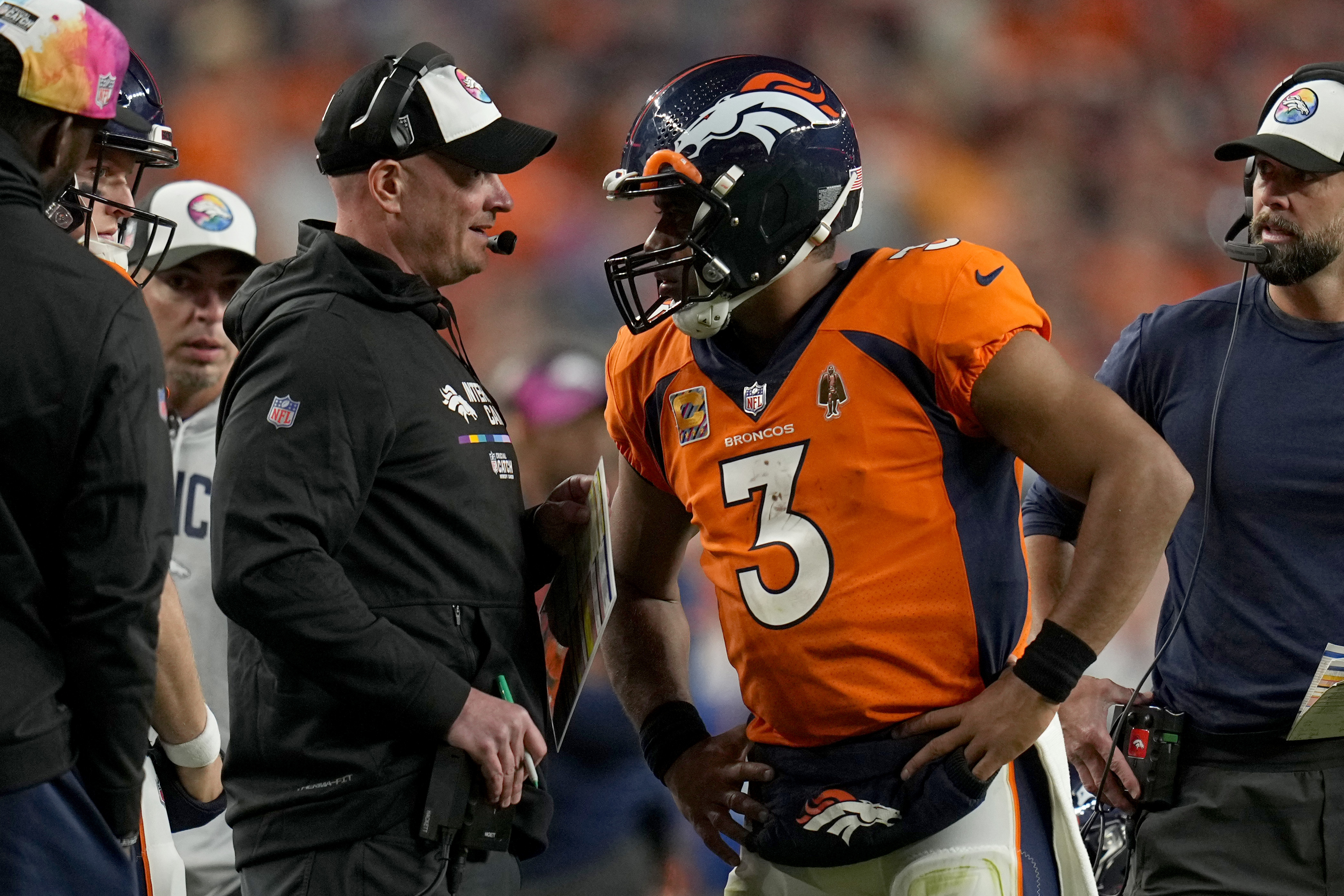 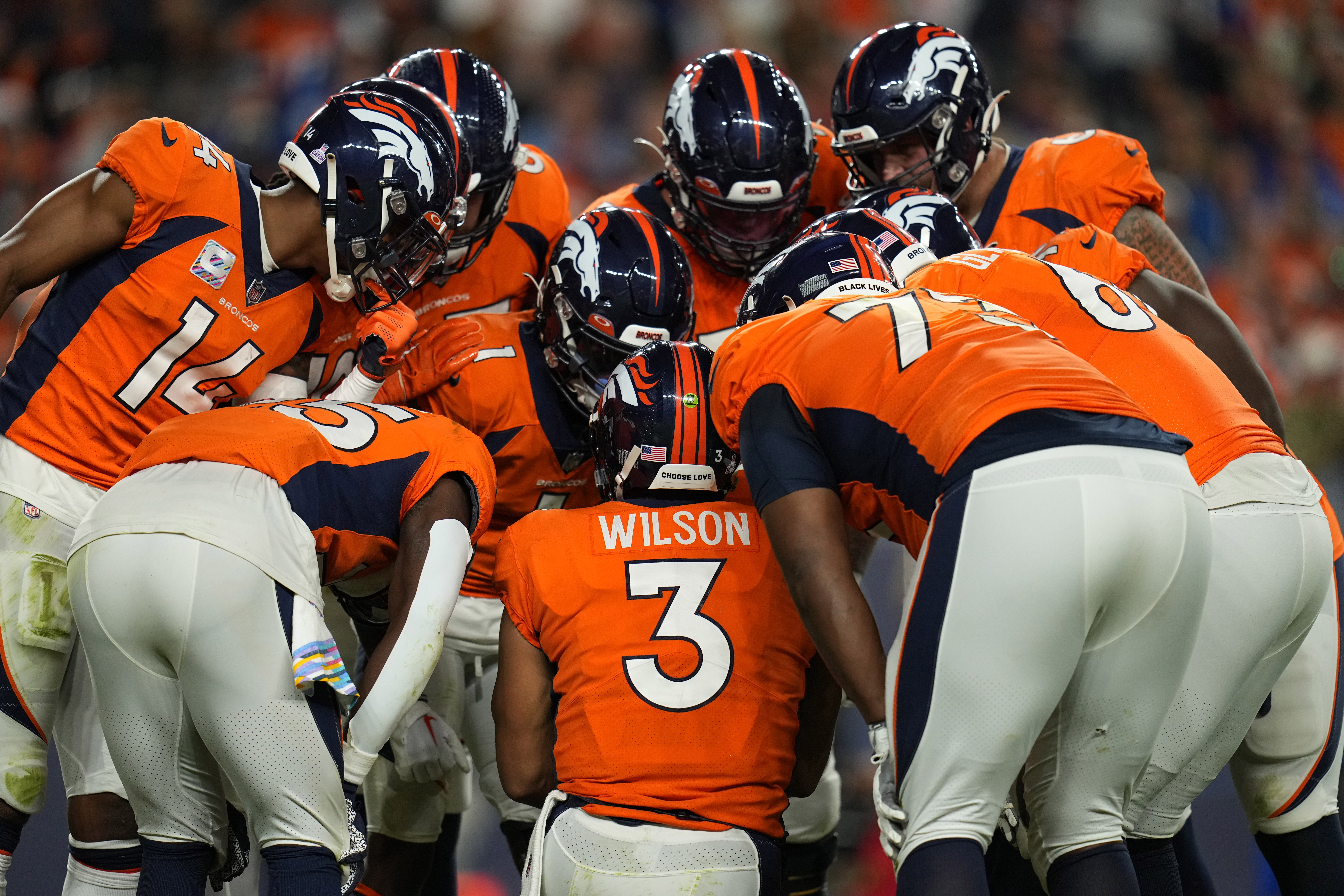 Denver Broncos quarterback Russell Wilson (3) huddles up his team during the second half of an NFL football game against the Indianapolis Colts, Thursday, Oct. 6, 2022, in Denver. (AP Photo/Jack Dempsey) 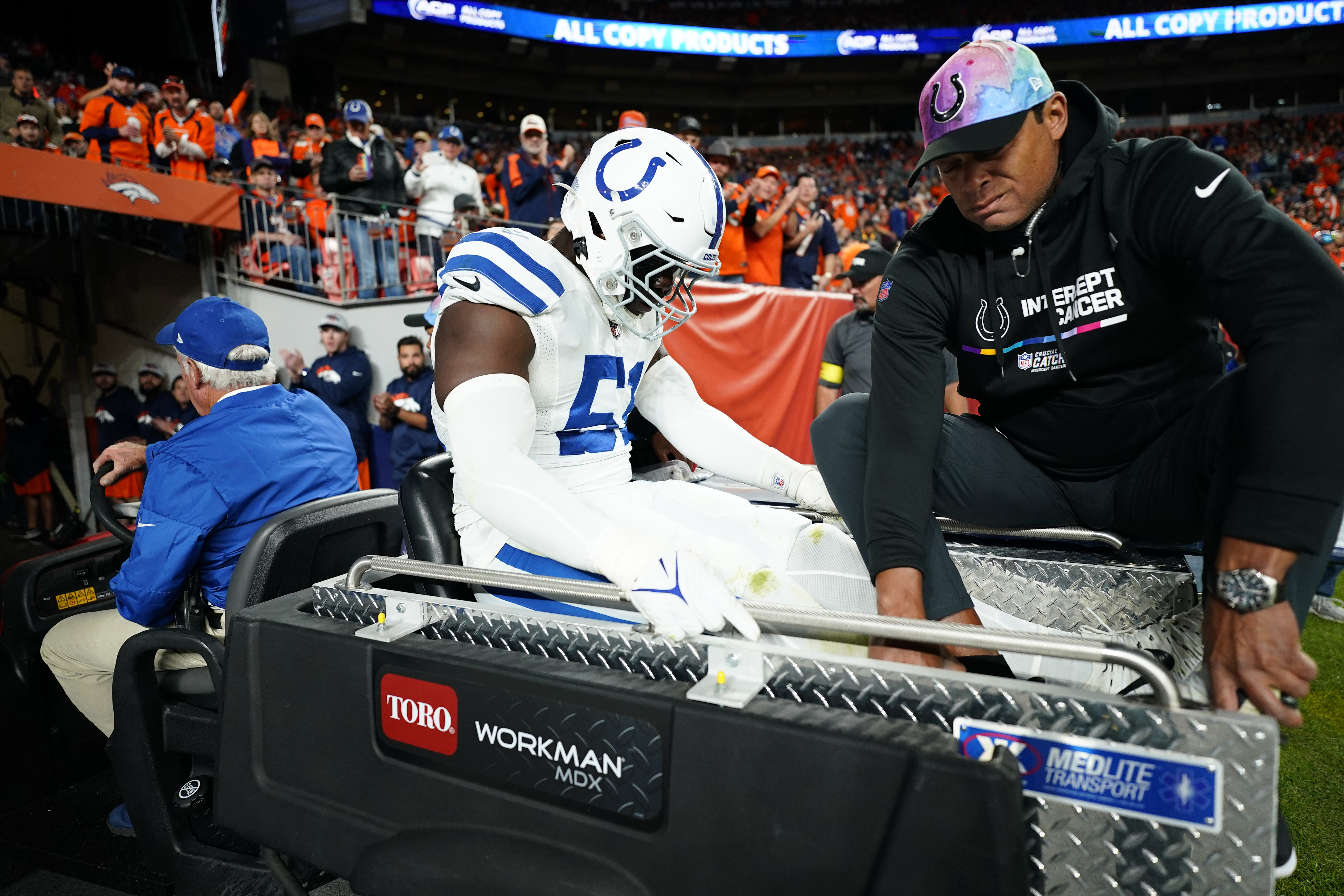 Indianapolis Colts defensive end Kwity Paye (51) is carted off the field after an injury against the Denver Broncos during the second half of an NFL football game, Thursday, Oct. 6, 2022, in Denver. (AP Photo/Jack Dempsey) 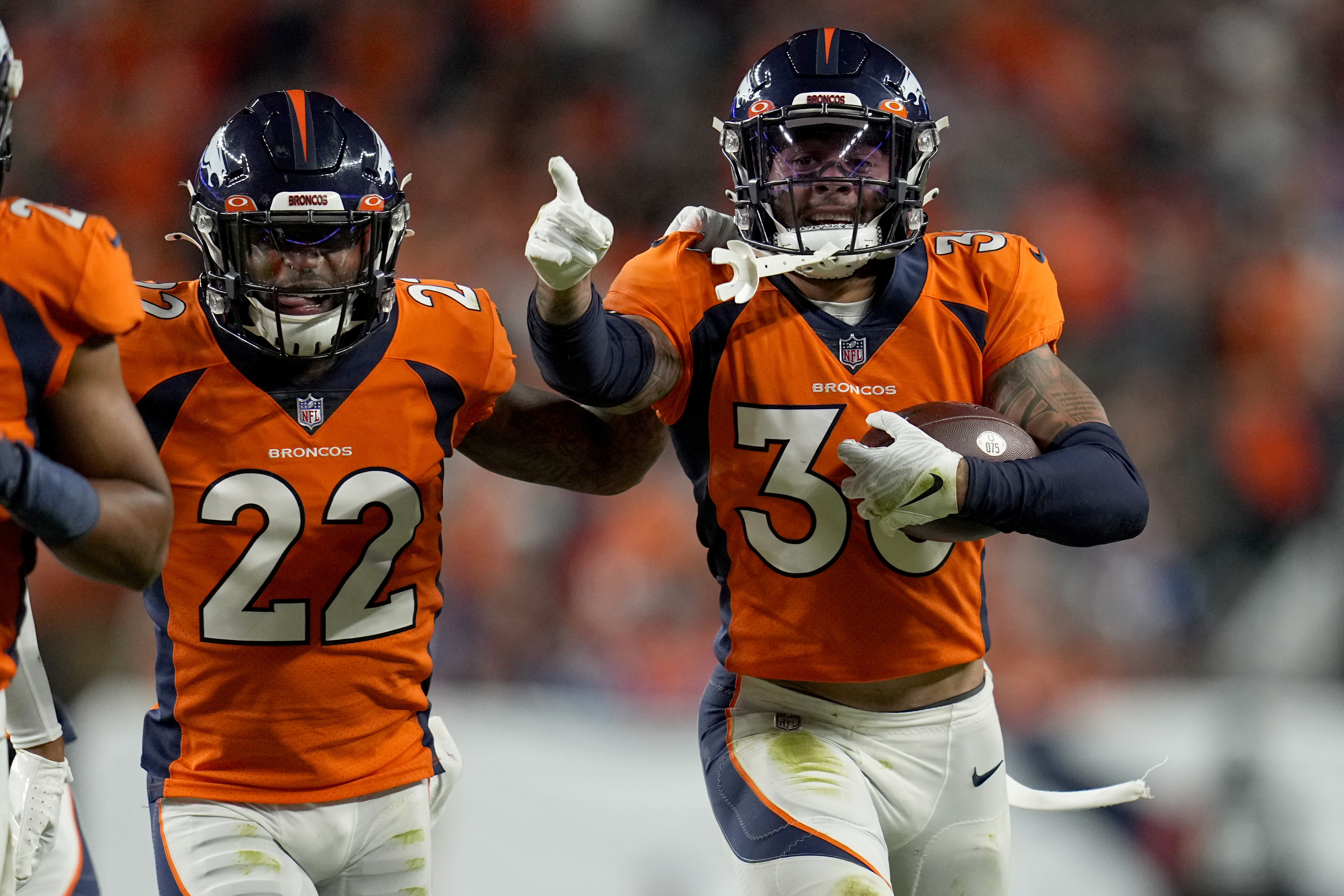 Denver Broncos safety Caden Sterns, right, celebrates an interception against the Indianapolis Colts during the second half of an NFL football game, Thursday, Oct. 6, 2022, in Denver. (AP Photo/Jack Dempsey) 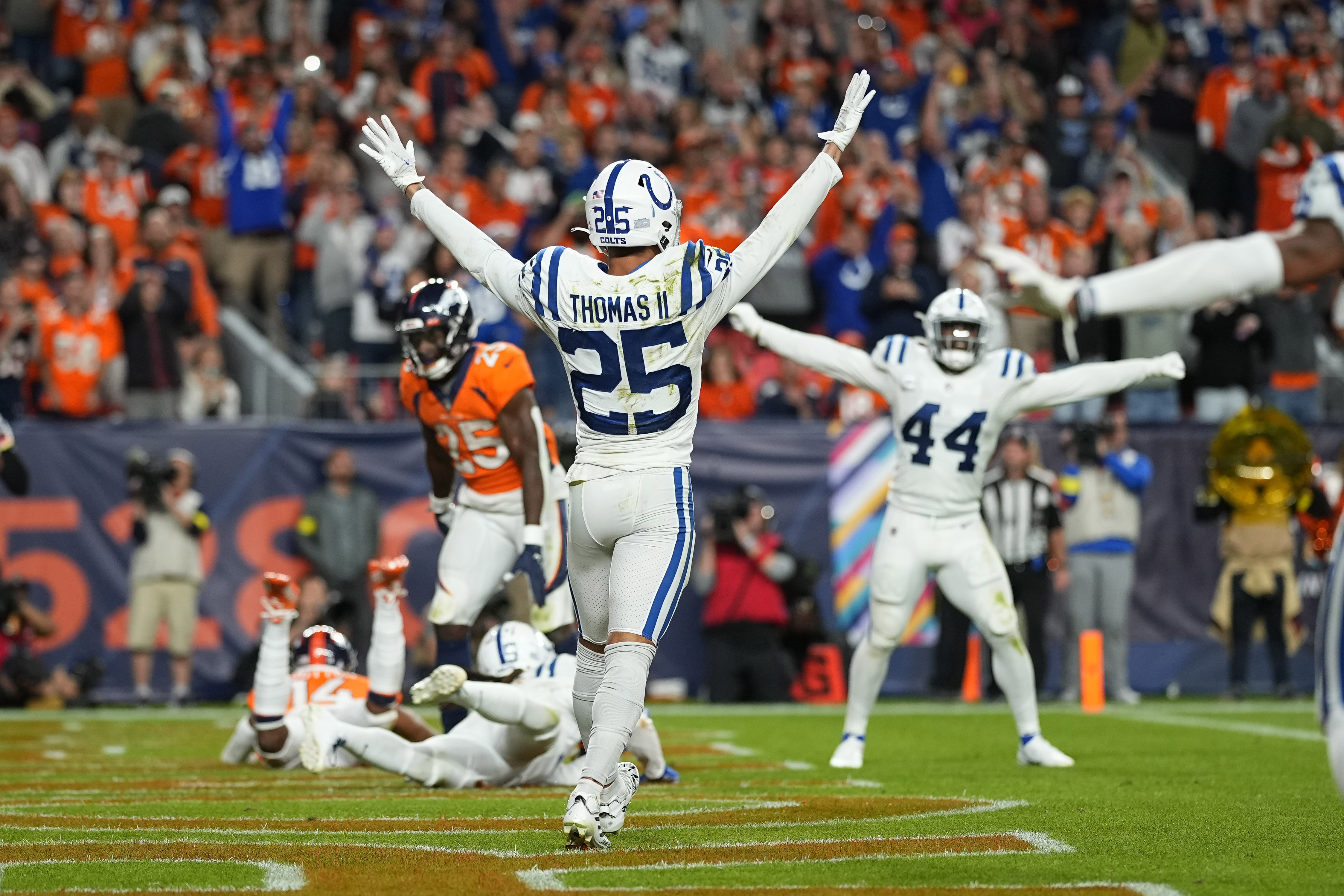 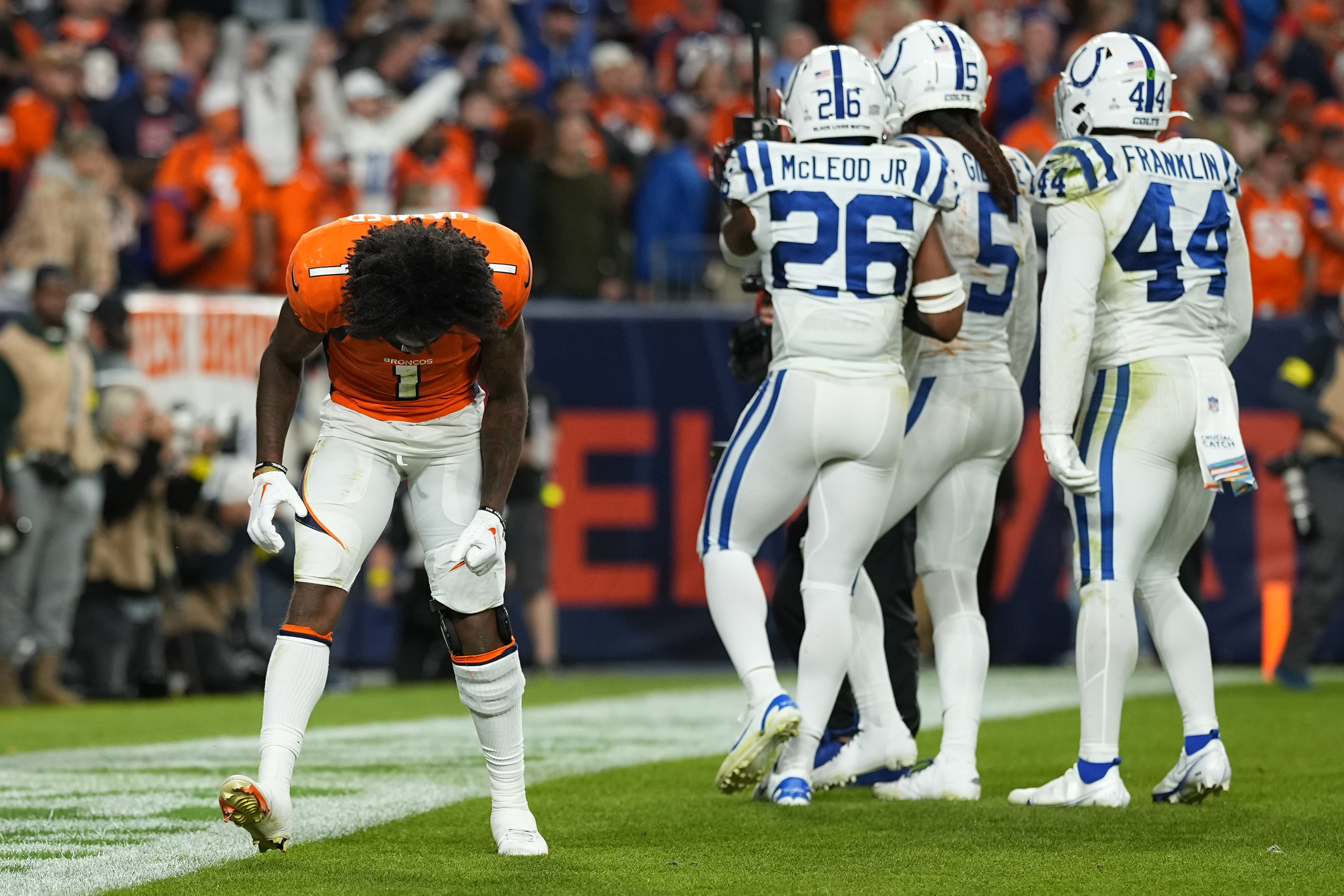 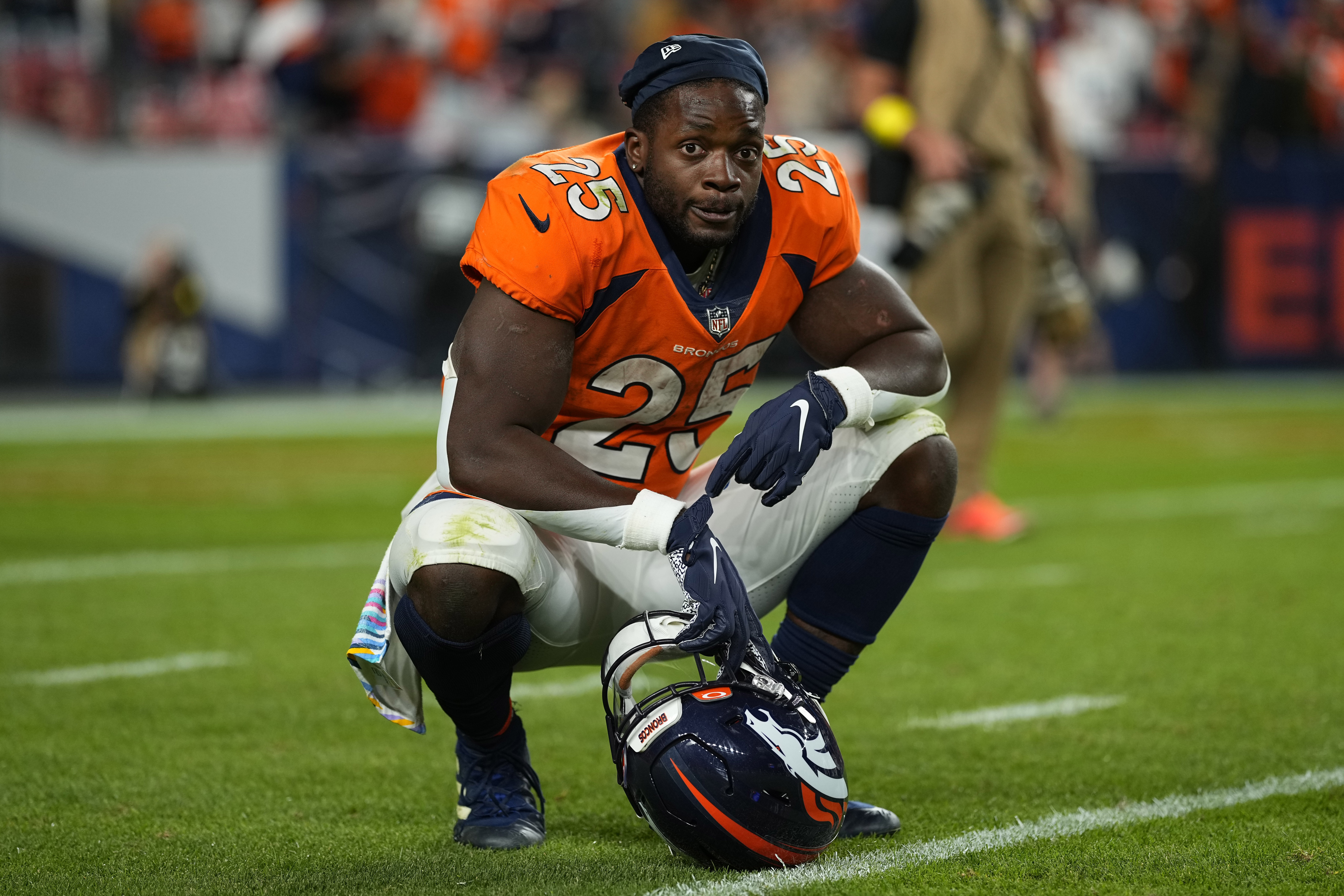 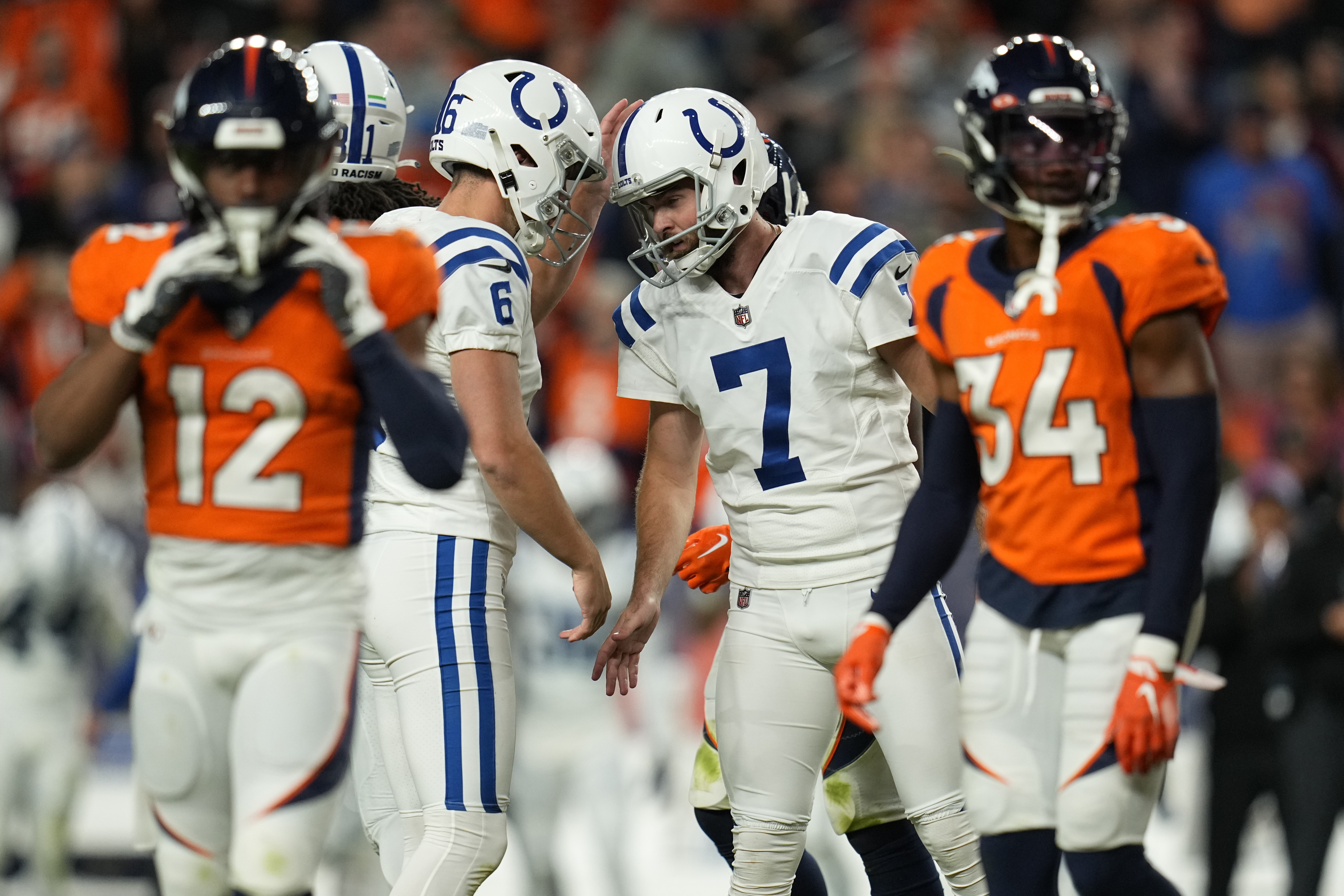