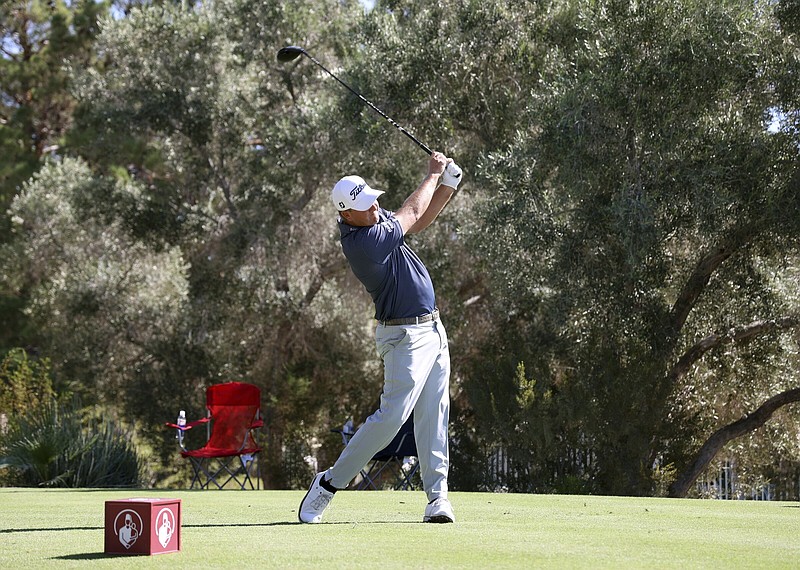 Tom Hoge opened with a pair of eagles for a 63 in Las Vegas at the Shriners Children’s Open and has a one-shot lead over Si Woo Kim and Maverick McNealy. Kim had a 65 and Homa had a 67. Patrick Cantlay also shot a 67. (AP/Ronda Churchill)

Tom Hoge wanted to be sure to take advantage of pristine conditions Thursday morning in Las Vegas. He did more than he expected, making two eagles on his way to an 8-under 63 for a one-shot lead in the Shriners Children's Open in Las Vegas. One of the eagles came with a gap wedge in his hand, part of a six-hole stretch he played in 6-under par in the middle of his round at the TPC Summerlin. The other eagle was a 35-foot putt down the hill on the par-5 16th. Former University of Arkansas golfers Taylor Moore and Jonesboro-native Austin Cook are tied for 54th with a 2-under 69s. David Lingmerth (Razorbacks) is at 1-under 70 and Andrew Landry (Razorbacks) shot a 1-over 72.

Jodi Ewart Shadoff went on a run of four consecutive birdies late in her round Thursday for an 8-under 64, taking a two-shot lead in the LPGA Mediheal Championship. Ewart Shadoff has played 245 times on the LPGA Tour without winning, and she got off to a strong start in hopes of ending more than a decade in search of an elusive title. Alison Lee and Ruixin Liu of China were at 66. Former University of Arkansas golfer Gaby Lopez is at 4-uner 68 and tied for seventh place. Brooke Matthews (Rogers, Razorbacks) turned in a 2-under 70. Stacy Lewis (Razorbacks) shot an even-par 72. Alana Uriell (Razorbacks) posted a 4-over 76.

The Official World Golf Ranking won't be awarding points to LIV Golf events this year, denying the MENA Tour's request to immediately add the Saudi-funded series to its schedule. The OWGR said in a statement Thursday the MENA Tour did not give it sufficient notice and there would not be time to finish the review ahead of the LIV Golf Invitational in Bangkok that starts today or the event in Saudi Arabia next week. In a move that indicates how quickly LIV Golf wants world ranking points for its 48-man fields, it created an alliance with the little-known MENA Tour, which hasn't run a tournament of its own since March 2020 because of the covid-19 pandemic.

Jon Rahm overcame early jitters from playing at home and shot a 7-under 64 in the opening round of the Spanish Open on Thursday to sit one stroke behind leaders Ashun Wu, Kiradech Aphibarnrat and Darius van Driel. Rahm is trying to win for the third time at home and join the great Seve Ballesteros for the most Spanish Open titles. Rahm made six birdies, an eagle and a bogey at Club de Campo Villa de Madrid. Rahm finished in a tie for 17th in last year's Spanish Open, when he said he arrived with more pressure because he was ranked No. 1 and had won the U.S. Open and played well in the Ryder Cup. Wu took the early lead after making eight birdies and no bogies in a round of 63. Thailand's Aphibarnrat made five consecutive birdies after a bogey on No. 12 in a busy round of 63. He also made three other birdies, an eagle and another bogey. Van Driel had nine birdies and a bogey. Former University of Central Arkansas golfer Pep Angles is at even-par 71.

The Patriots placed quarterback Brian Hoyer on injured reserve Thursday, the latest blow to New England's depth at quarterback. The veteran was knocked out in the second quarter of the Patriots' 27-24 overtime loss to Green Bay last week following a blind side hit by Rashan Gary. Hoyer was making his first start since 2020, filling in for Mac Jones, who has an injured left ankle. Jones has been a limited participant in practices this week. If he isn't ready to go, rookie Bailey Zappe is expected to make his first NFL career start Sunday when New England plays host to Detroit.

The Atlanta Falcons released starting defensive tackle Anthony Rush in a surprise move Thursday. Rush had seven tackles while starting each of the first four games for Atlanta, which plays at Tampa Bay on Sunday. Rush had a season-high three tackles in the Falcons' 23-20 win over Cleveland last week.

An appeals panel on Thursday reinstated the 25 points William Byron had been docked by NASCAR for deliberately spinning championship rival Denny Hamlin, a critical decision that helps his playoff hopes. The three-person panel found that Byron did break a NASCAR rule for spinning Hamlin under caution. But Hendrick Motorsports had appealed the NASCAR penalty, which was initially a $50,000 fine and the loss of 25 critical points in the championship race. The panel instead upped the fine to $100,000 and gave Byron back his points. The favorable ruling moved Byron from below the elimination line headed into Sunday's race at Charlotte Motor Speedway, where the playoff field will be cut from 12 to eight. Byron was 10th in the standings with the loss of points; he's now seventh in the standings and 14 points above the cutline.

Add Botic van de Zandschulp to the long list of players to have been schooled by Novak Djokovic. Djokovic eased past Van de Zandschulp 6-3, 6-1 on Thursday in his first career meeting with the 27-year-old Dutchman to reach the quarterfinals of the Astana Open. Van de Zandschulp earned one break point in each set but couldn't seriously threaten Djokovic, who is looking for a second consecutive indoor hardcourt title after winning in Tel Aviv last week. Djokovic will next face Karen Khachanov, who rallied to beat Marin Cilic 2-6, 6-3, 6-3.

American qualifier Alycia Parks is having quite the breakthrough tournament in Ostrava. The 21-year-old Parks earned her first win against a top-10 ranked opponent by beating fourth-seeded Maria Sakkari 5-7, 7-5, 7-5 at the Agel Open on Thursday to reach her first WTA Tour quarterfinal. The 144th-ranked Parks ousted former No. 1 Karolina Pliskova in the opening round -- her first win against a top-20 opponent -- and showed off her power by hitting 59 winners against Sakkari, compared to just nine for her opponent. Parks will next face former French Open champion Barbora Krejcikova.