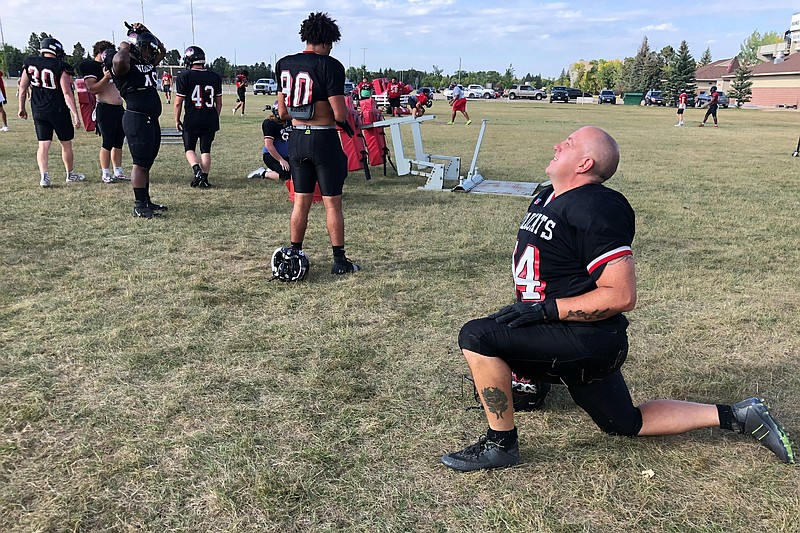 Ray Ruschel, a 49-year-old freshman football player for the North Dakota State College of Science, takes his turn on the blocking sled on Tuesday, Sept. 20, 2022, in Wahpeton, N.D. Ruschel had not played football since he was in high school in Pennsylvania. The Army veteran is a night-shift mechanic at a local sugar beet factory. He is seeking a degree in business management after his most recent deployment with the National Guard. He hopes to become a supervisor at work. For now, he is holding his own with 19- and 20-year-old football players on a team with national title hopes.. (AP photo/Dave Kolpack)

WAHPETON, N.D. -- When North Dakota State College of Science suffered a heartbreaking loss in early September -- foiled at the goal line as time expired in a jolt to their national championship ambitions -- it was a backup defensive lineman who stepped forward with a pep talk to lift the locker room.

Forget it, 49-year-old Ray Ruschel said, according to his junior college teammates. Focus on the rest of the season and things will work out.

"There were just kind of emotions everywhere. Everybody did not handle it," wide receiver Marselio Mendez said after the loss to rival Minnesota State Community Technical College. "Ray came up and said, you know, it's not really failing, right? He said we just have to put the emotion to the side and we still got the rest of the season and playoffs to show who we are."

When it comes to inspiration, the Wildcats could do worse than look to Ruschel's own story, and the path that brought him to a small, vocational-minded school in the wide shadow cast by nearby NCAA power North Dakota State.

After nearly two decades in the Army and National Guard, Ruschel was working as a night-shift mechanic at a North Dakota sugar beet factory when he decided to enroll at the College of Science. The school offers two-year programs in manufacturing, skilled trades, health care, and the liberal arts.

That sounded good to Ruschel, who hoped to move up at the factory and decided to study business management. Then he learned the school had a football team among its six sports -- and that, despite his age, he was eligible.

"Something just clicked in my head, like why not play?" recalled Ruschel, whose last game action came when he was a high school senior in Pennsylvania, more than 30 years ago.

When Ruschel asked head coach Eric Issendorf -- one year younger -- for a tryout, Issendorf said sure, even though he worried that Ruschel might get hurt.

Instead, Ruschel has held his own and earned the respect of the other players. He now plays about a dozen snaps a game.

"Guys that he's playing against are bigger, faster, stronger than him," Issendorf said. "But he's been able to manage it. His personality .... he's just a really likable guy with an ambition not to leave any stone unturned. As long as he's here on this earth."

Wahpeton, a mostly industrial town of about 7,800, is home to the Minn-Dak Farmers Cooperative, one of the largest sugar beet producers in North Dakota and Minnesota. That's where Ruschel works an overnight shift, then fits in a couple of hours at the gym after he gets off at 8 a.m. each day.

After a few hours of schoolwork online at his apartment near campus, Ruschel grabs some rest before afternoon practice, which runs until about 7 p.m. Then it's back to his apartment, where Ruschel showers and eats before lying down for whatever rest he can get before it all begins again with his overnight shift.

How does he pull off such a grueling schedule?

The college campus is home to about 3,000 students, anchored by its historic Old Main that dates to its founding in 1903. A recruiting brochure boasts of a 97% employment rate for graduates.

When it comes to football, it's no North Dakota State -- a perennial national champion in the NCAA's second tier, with a $25 million budget, a dome that seats 19,000 and numerous alumni in the NFL.

But it's not bad, with facilities among the best in junior college football, including a 4,100-seat stadium, four practice fields and a locker room with 90 modern stalls.

The Wildcats went 9-1 last season, second-best in school history, and finished at No. 4 in the Division III junior college rankings. After a 37-6 win over Vermillion Community College -- a six-hour bus ride to far northeastern Minnesota -- and a homecoming win last weekend they are 4-1 in a season they hope can end with a national championship.

Players say Ruschel fits in with his teammates despite the obvious musical and cultural differences that come with such a big age gap. On that bus ride to Minnesota, for example, Ruschel spent the hours scrolling through Facebook, listening to music on his head phones and "staring out the window mostly." No Instagram or TikTok for him.

"The players will come up to me and ask me what I'm listening to," Ruschel said, chuckling. "I tell them country music and that will be the end of that."

Ruschel, who made sergeant while in the Army and said he aims to stay active in the National Guard until he's 60, has served in Afghanistan and Jordan, though he declined to talk about the tours.

Linebacker Manny Garcia said Ruschel's Army experience and his willingness to take on players less than half his age give him credibility with his teammates.

"You know, we hear Ray's stories about the military and listen to those and make sure we try to translate those to the football field, for sure," Garcia said.

Five games into the season, the 6-foot, 225-pound Ruschel, a workout buff, said he feels no pain on the field.

"All in all I'm no more sore than the rest of these kids," he said. "I've just got to keep stretching." 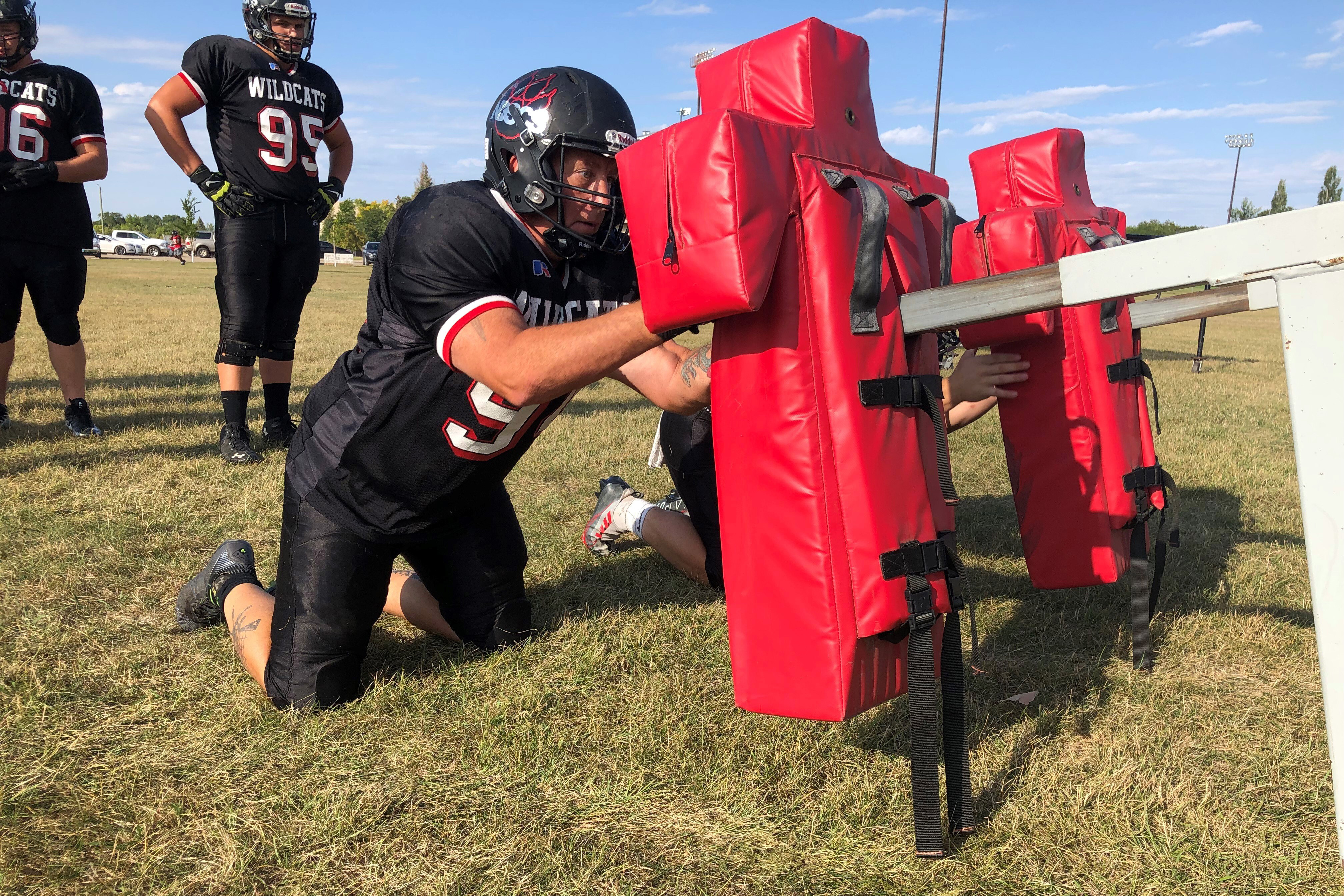 Ray Ruschel, a 49-year-old freshman football player for the North Dakota State College of Science, takes his turn on the blocking sled on Tuesday, Sept. 20, 2022, in Wahpeton, N.D. Ruschel had not played football since he was in high school in Pennsylvania. He plays defensive line for the Wildcats, mostly at nose guard. “He holds his own,” teammate Manny Garcia says. (AP Photo/Dave Kolpack) 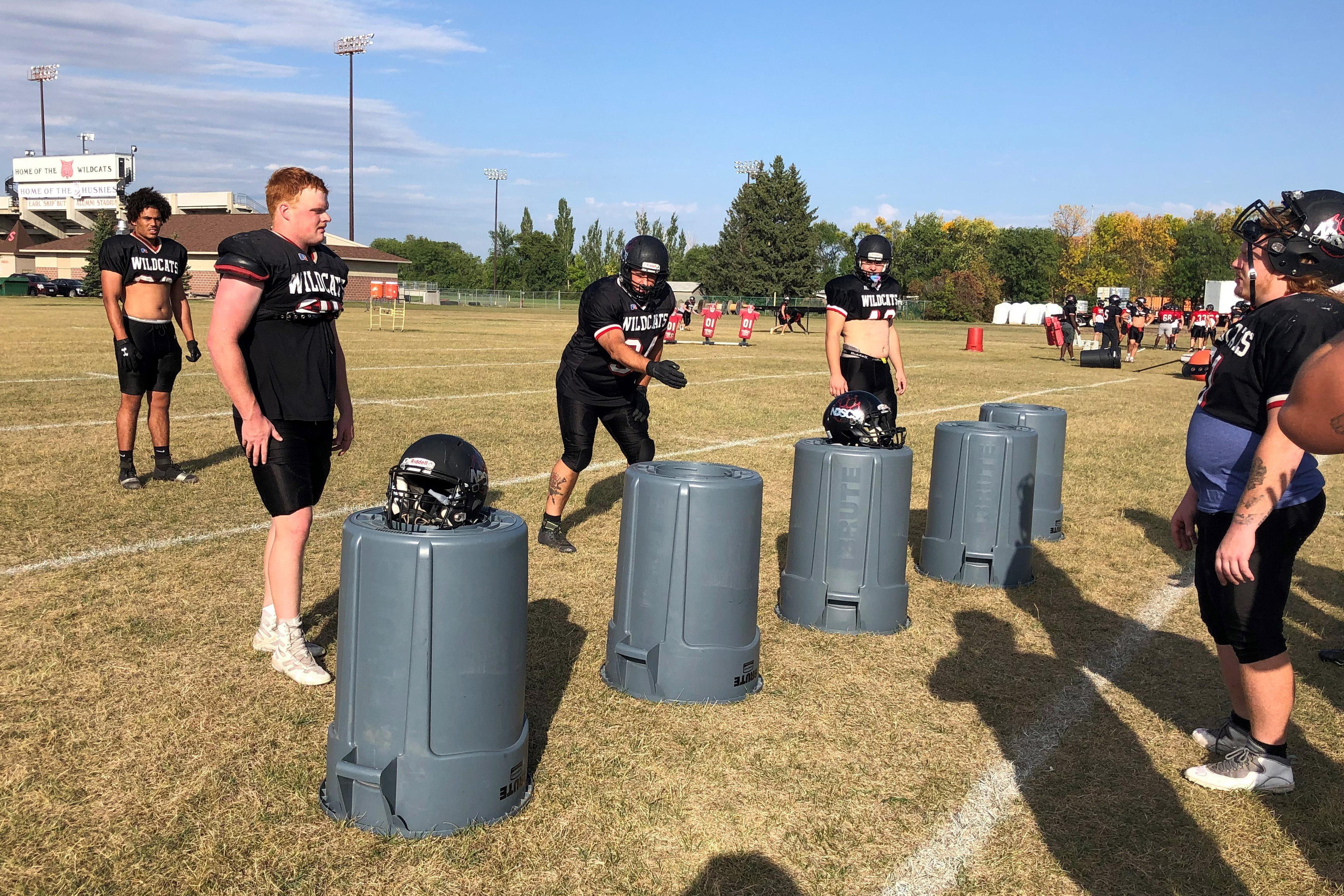 Defensive lineman Ray Ruschel, gesturing at center, a 49-year-old college freshman at North Dakota State College of Science, works on rushing techniques during practice on Tuesday, Sept. 20, 2022, in Wahpeton, N.D. Ruschel who spends his nights working as a mechanic at a local sugar beet factory, is seeking a business management degree at the junior college in hopes of becoming a supervisor at the plant. He plays a dozen snaps or more a game. (AP Photo/Dave Kolpack)