Thousands due pardons for marijuana possession 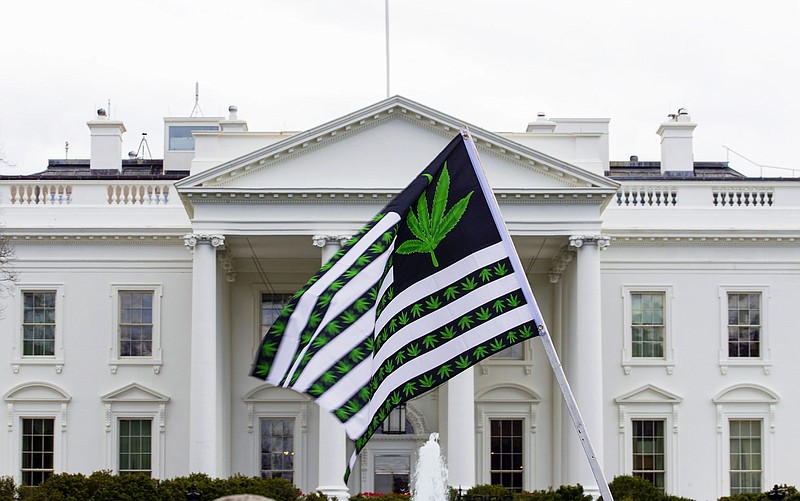 A demonstrator waves a marijuana flag outside the White House during a 2016 protest calling for the legalization of marijuana. President Joe Biden said his move Thursday to pardon thousands of Americans convicted in federal court of “simple possession” of marijuana will help thousands of people hamstrung by such prior convictions. (AP)

WASHINGTON -- President Joe Biden is pardoning thousands of Americans convicted of "simple possession" of marijuana under federal law, as his administration takes a step toward decriminalizing the drug and addressing charging practices that disproportionately impact people of color.

Biden's move announced Thursday also covers thousands convicted of the crime in the District of Columbia. He is also calling on governors to issue similar pardons for those convicted of state marijuana offenses, which reflect the vast majority of marijuana possession cases.

Biden, in a statement, said the move reflects his position that "no one should be in jail just for using or possessing marijuana."

"Too many lives have been upended because of our failed approach to marijuana," he added. "It's time that we right these wrongs."

"There are thousands of people who have prior Federal convictions for marijuana possession, who may be denied employment, housing, or educational opportunities as a result. My action will help relieve the collateral consequences arising from these convictions."

The pardons will clear everyone convicted on federal charges of simple possession since it became a crime in the 1970s. Officials said full data was not available but noted that about 6,500 people were convicted of simple possession between 1992 and 2021, not counting legal permanent residents. The pardons will also affect people who were convicted under District of Columbia drug laws; officials estimated that number to be in the thousands.

The pardons will not apply to people convicted of selling or distributing marijuana. And officials said there are no people now serving time in federal prisons solely for marijuana possession. But the move will help remove obstacles for people trying to get a job, find housing, apply to college or get federal benefits.

The announcement marks Biden's reckoning with the impact of 1994 crime legislation, which he supported, that increased arrest and incarceration rates for drug crimes, particularly for Black and Hispanic people.

The Department of Justice is working to devise a process for those covered by Biden's pardon to receive a certificate of pardon, which they can show to potential employers and others as needed.

"The Justice Department will expeditiously administer the President's proclamation, which pardons individuals who engaged in simple possession of marijuana, restoring political, civil, and other rights to those convicted of that offense," the department said in a statement. "In coming days, the Office of the Pardon Attorney will begin implementing a process to provide impacted individuals with certificates of pardon."

Biden is also directing the secretary of Health and Human Services and the U.S. attorney general to review how marijuana is scheduled under federal law. Rescheduling the drug would reduce or potentially eliminate criminal penalties for possession. Marijuana is currently classified as a Schedule I drug, alongside heroin and LSD, but ahead of fentanyl and methamphetamine. The White House did not set a timeline for the review.

But Biden said he believes that as the federal government and many states ease marijuana laws, they should maintain limitations on trafficking, marketing and underage sales.

The move by Biden puts the federal government on course with other big cities such as New York that have been moving toward decriminalizing low-level marijuana arrests for years. But there's a big divide in the nation as some police departments still believe the drug leads to more serious crime and that ignoring low-level offenses emboldens criminals.

After Biden's announcement, Arkansas Republican Gov. Asa Hutchinson released his own statement saying the president has "has waived the flag of surrender in the fight to save lives from drug abuse."

"The Department of Justice should not issue blanket pardons, but each case should be looked at individually," Hutchinson said. "As Governor I have issued hundreds of pardons to those who have been convicted of drug offenses. But in this time of rising crime there should be a clear record of law-abiding conduct before pardons are issued."

Hutchinson, who served as administrator of the Drug Enforcement Administration under President George W. Bush, also criticized Biden's call to review how marijuana is scheduled by federal law.

"In terms of rescheduling marijuana, the president is ignoring the science that is behind the different categories of drugs," Hutchinson said. "While his proposal sounds good, this is a step that has not been taken by the Obama Administration or the Trump Administration. Biden is simply playing election year politics and sacrificing our national interest to win votes."

"In the midst of a crime wave and on the brink of a recession, Joe Biden is giving blanket pardons to drug offenders," said Sen. Tom Cotton, R-Ark. "This is a desperate attempt to distract from failed leadership."

"This is incredibly long overdue," said Frederique. "There is no reason that people should be saddled with a criminal record -- preventing them from obtaining employment, housing, and countless other opportunities -- for something that is already legal in 19 states and D.C. and decriminalized in 31 states."

Inimai Chettiar, the federal director of the Justice Action Network, called the president's move "a really good step" and said one of the most important parts of Biden's policy is the directive to review how future marijuana crimes are prosecuted.

"That's trying to change a policy decision that was made that marijuana is as dangerous as these other drugs, which we know is not true," Chettiar said.

It remains to be seen whether governors follow Biden's lead. Erik Altieri, executive director of the National Organization for the Reform of Marijuana Laws, said extending the action to states could help millions of Americans.

"Since 1965, nearly 29 million Americans have been arrested for marijuana-related violations -- for activities that the majority of voters no longer believe ought to be a crime," he said.

Only 92 people were sentenced on federal marijuana possession charges in 2017, out of nearly 20,000 drug convictions, according to the U.S. Sentencing Commission.

Marijuana is already fully legal in about 20 states, and some other states have relaxed criminal penalties, according to DISA, a large drug-testing company that tracks state laws regarding marijuana. It remains fully illegal in a handful of states. The federal government will stopped charging anyone with simple possession Thursday, officials said.

Chris Goldstein, 46, was arrested after smoking half a joint during a marijuana legalization protest at Independence Hall in Philadelphia in 2013. He paid a $3,000 fine and spent two years on probation.

"As someone who voted for President Biden, I've been expecting this from the first day he came into office," Goldstein said. "This was a campaign promise."

As a writer and activist who has been public about his conviction, he's not sure that his criminal record was an obstacle to him getting a job, but he knows that it shows up in his background checks. And he's shied away from visiting other countries because convictions can complicate international travel.

"I'm thrilled, and everyone like me is going to be just as thrilled," he said.

The Rev. Al Sharpton, the president of the National Action Network, said Biden's "righteous action today will give countless Americans their lives back." But he added, "The United States will never justly legalize marijuana until it reckons with the outdated policies that equated thousands of young Black men with hardened drug pushers."

The move also fulfills one of the top priorities of the Democratic nominee in one of their party's most critical Senate races, as Pennsylvania Lt. Gov. John Fetterman has repeatedly pressed Biden to take the step, including last month when they met in Pittsburgh.

Fetterman, in a statement, took credit for elevating the issue on Biden's agenda and praised the decision, calling it "a massive step towards justice."

"This action from President Biden is exactly what this work should be about: improving people's lives. I commend the president for taking this significant, necessary, and just step to right a wrong and better the lives of millions of Americans," he said.

Some criminal justice activists have criticized Biden for taking too long to enact more lenient sentencing proposals like the one he announced Thursday.

They argue that Biden was cowed by Republican attacks that blamed the president's policies for the rise in violent crimes in some parts of the country.

Biden has rejected the call from some members of his party to "defund" the police and has insisted that police need more money to do their jobs.

Information for this article was contributed by Zeke Miller, Chris Megerian, Colleen Long of The Associated Press, Neal Earley of the Arkansas Democrat-Gazette and by Michael D. Shear and Zolan Kanno-Youngs of The New York Times. 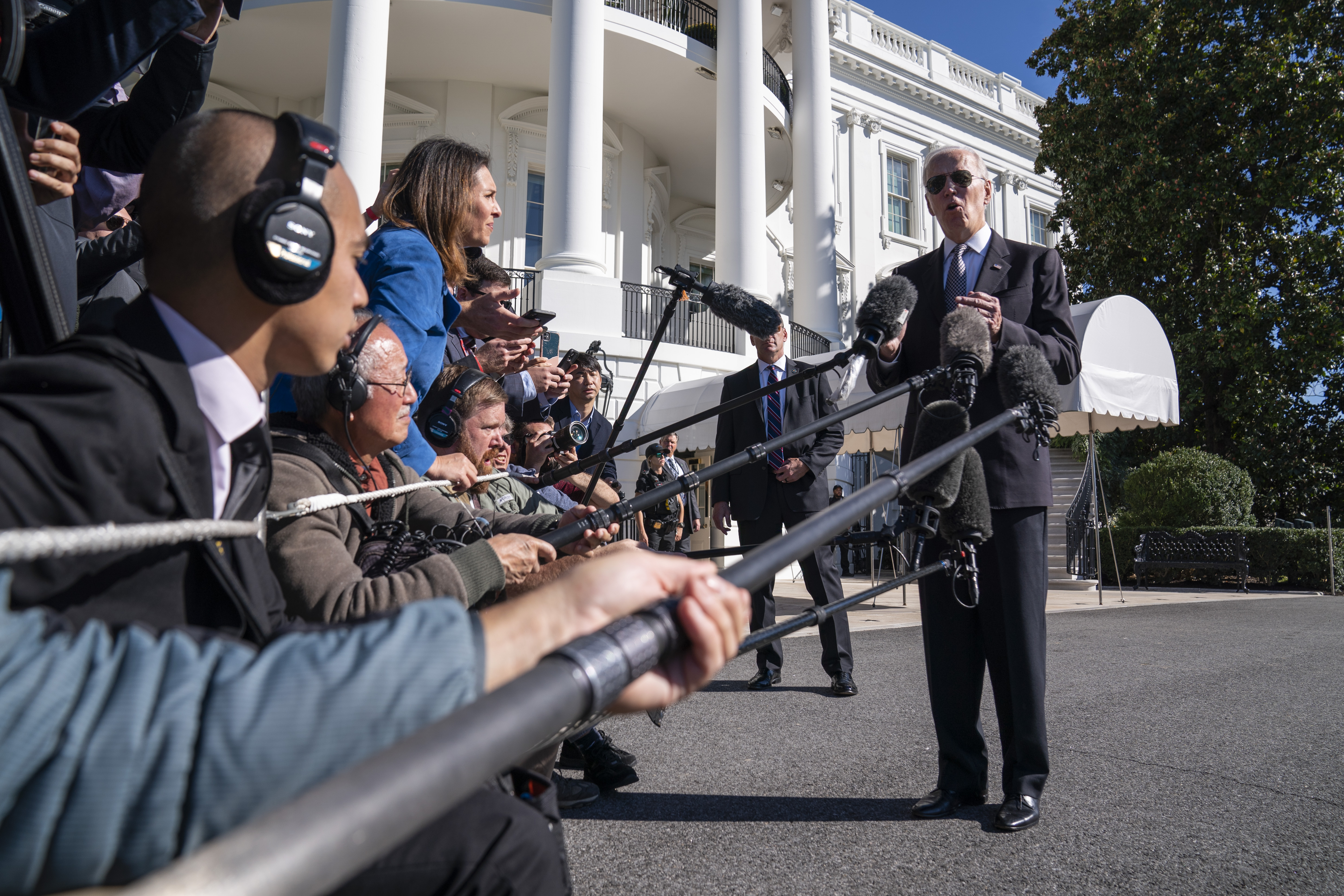 President Joe Biden talks to reporters before boarding Marine One on the South Lawn of the White House, Thursday, Oct. 6, 2022, in Washington. (AP Photo/Evan Vucci) 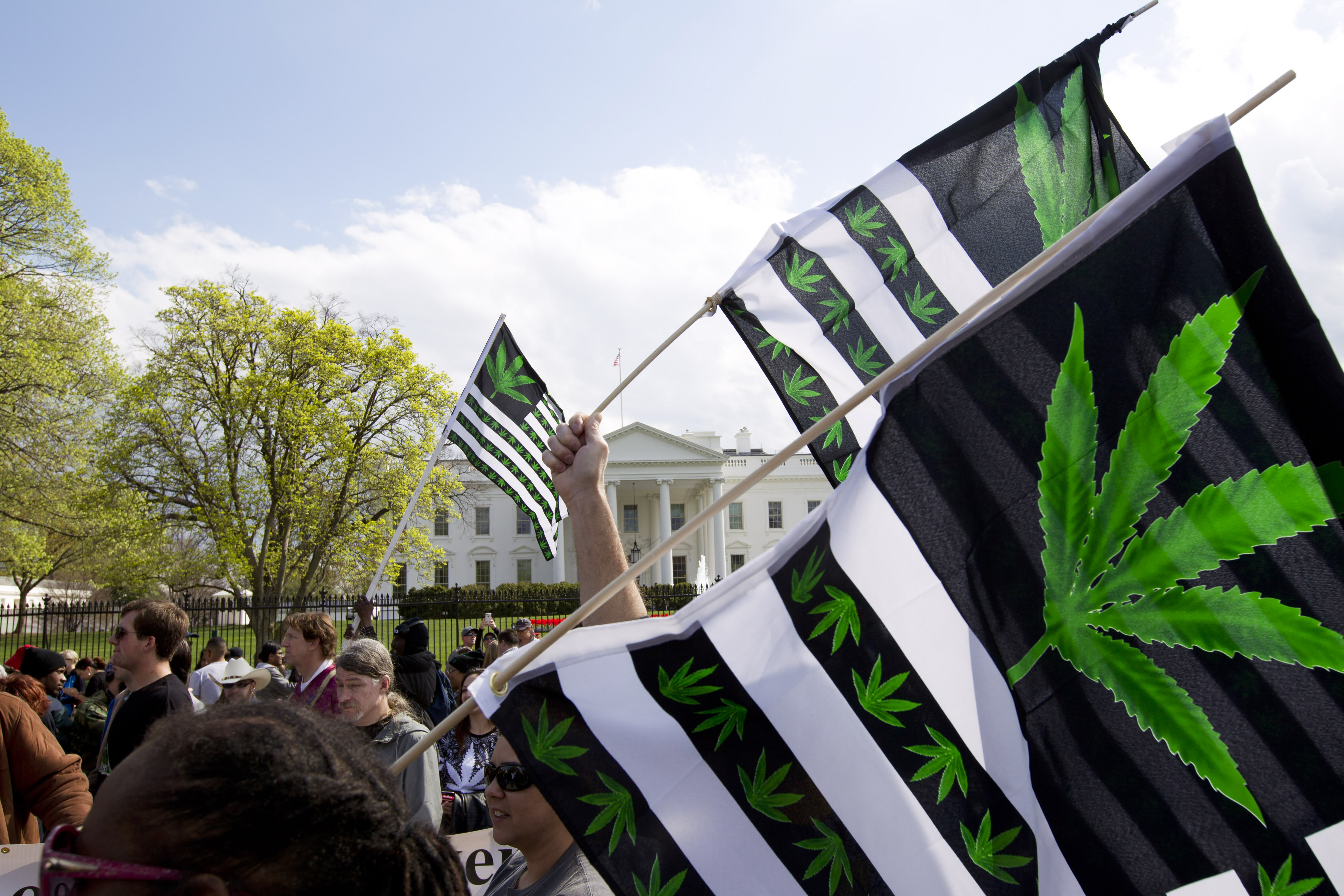 FILE - A demonstrator waves a flag with marijuana leaves depicted on it during a protest calling for the legalization of marijuana, outside of the White House on April 2, 2016, in Washington. President Joe Biden is pardoning thousands of Americans convicted of “simple possession” of marijuana under federal law, as his administration takes a dramatic step toward decriminalizing the drug and addressing charging practices that disproportionately impact people of color. (AP Photo/Jose Luis Magana, File) 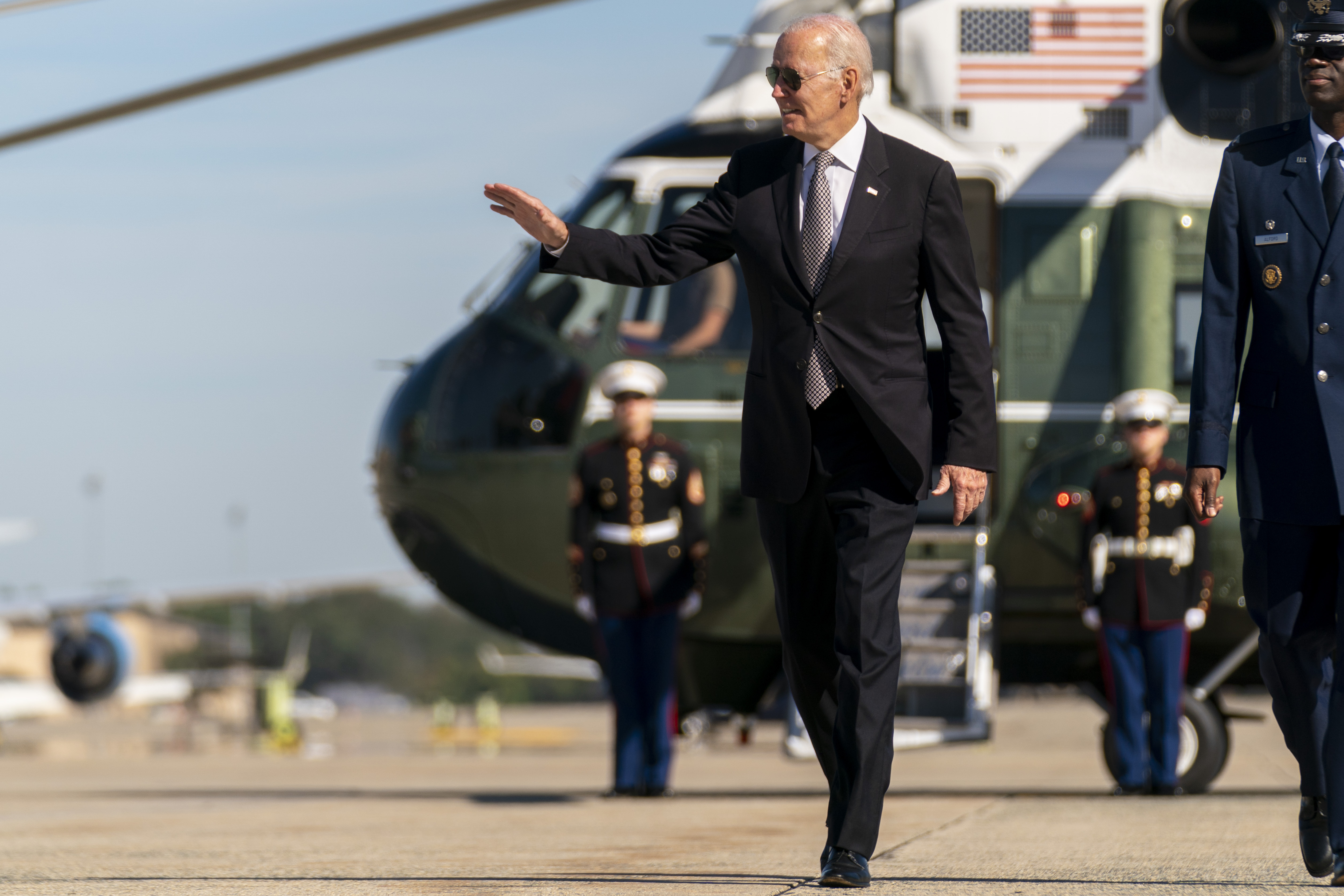 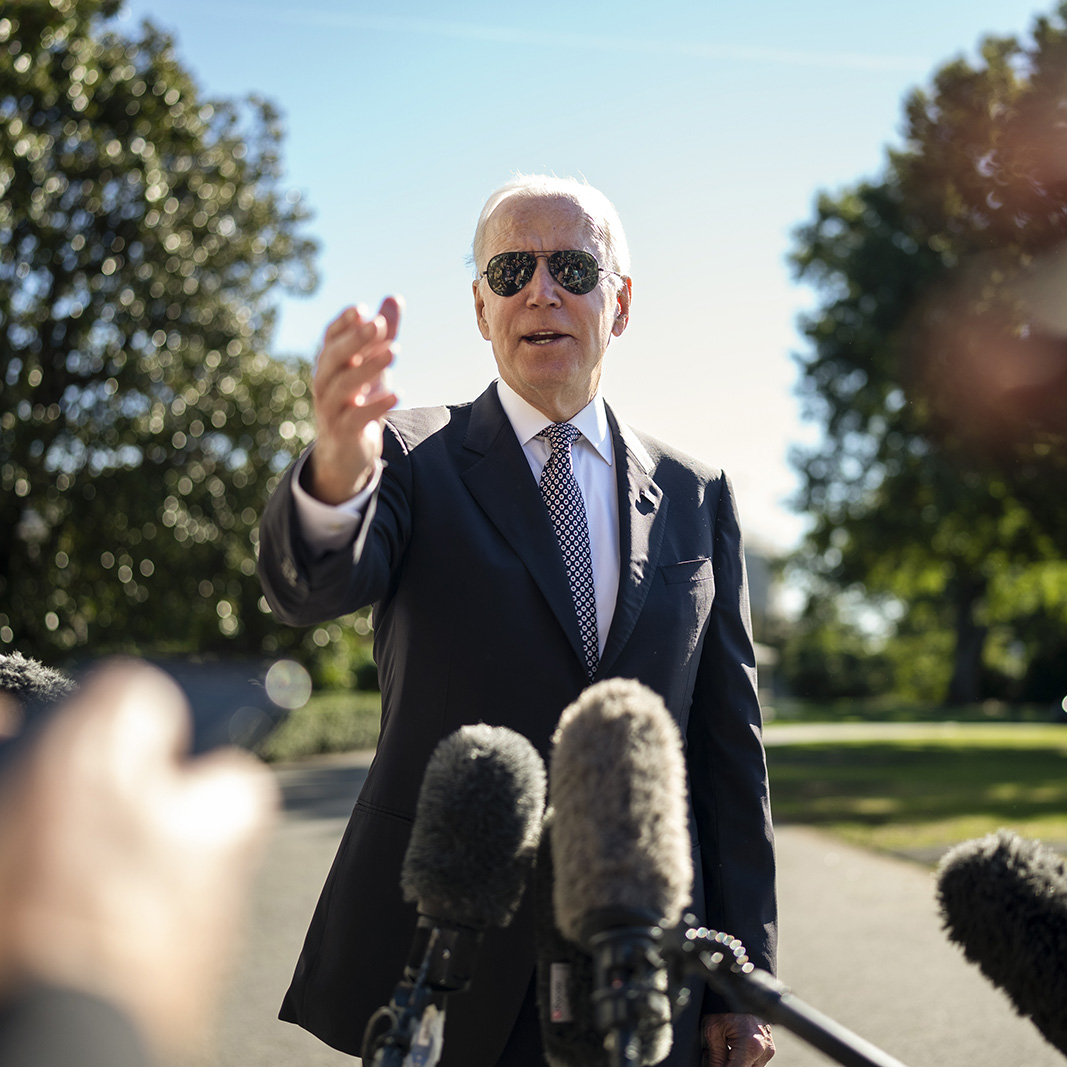 President Joe Biden talks with reporters Thursday as he departs the White House for a trip to New Jersey and New York. “Too many lives have been upended because of our failed approach to marijuana,” Biden said in a statement. “It’s time that we right these wrongs.” (The New York Times/Doug Mills)