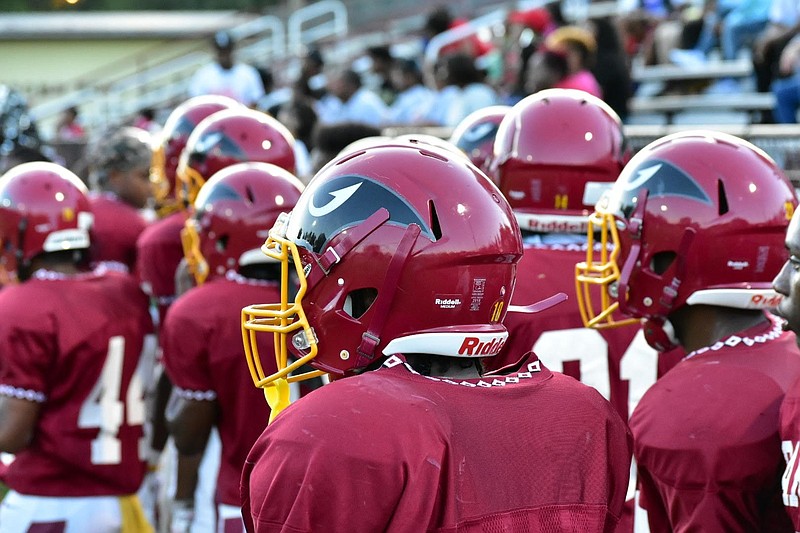 Dollarway's Martese Henry and Fordyce's Tim Rodgers recalled a time when their football teams were rivals in the old District 8-4A.

The two teams squared off every year from 2002-09, with Dollarway winning each of the first seven meetings. Fordyce got the better of the Cardinals, 20-16, in 2009.

"I showed them some old clips and things of that nature, and just let them know that at one point, this was like a rivalry," said Henry, Dollarway's fifth-year head coach. "And, so, I think they're going to take pride in it this Friday night and represent Dollarway the right way. We'll see how it turns out."

The two programs with a combined nine state championships in the Arkansas high school playoff era will meet again for the first time in 13 years tonight, when Dollarway hosts its annual Alumni Roundup following the game at Cardinal Stadium. There inside the Dollarway Fieldhouse, alumni will see reminders of the glory days of their school's football program.

From 1988-91, Dollarway won 51 straight games and three straight AAA state championships. Some graduates will remember the game that ended that long streak -- Fordyce 12, Dollarway 8, in the 1991 AA state final.

"They may not be as good as they have been, but they always have athletes and they play hard," said Rodgers, who was an assistant on the Redbugs' 1990 and 1991 title teams. "When you're playing at their place, that's a tough place to play. We remember that because we were in the conference with them for a few years when we were 4A."

The 2022 Redbugs are young, but the playoff experience of their 10 seniors has helped them remain contenders in 3A after a 1-2 start (losses to Monticello and Prescott), Rodgers said.

"We have a lot of kids who haven't played a lot over the last few years and we make a lot of mistakes," he said. "But we've got some guys who have played in those championship games, and it seems like they always do something to help us win ballgames. We've had a couple of real close ballgames and done things right there in the end of the ballgame to win."

Among Fordyce's three straight wins was a 49-48 confrontation at Barton two weeks ago. The Redbugs have ridden the running performance of senior Kriston Belin, who rushed for about 250 yards last week in a 50-24 win over Drew Central and has an estimated 10 to 12 rushing touchdowns this year.

Juniors Camilo and Akeem Allen, who are brothers, lead the Redbugs in tackles. Camilo is an inside linebacker and Akeem is a defensive lineman.

The Redbugs also draw experience from seniors Taylor Poole and Jyrique Walker in the secondary.

Dollarway, meanwhile, is seeking a complete reversal of its season thus far.

The Cardinals have been a playoff team each of the past four years and can make it five by starting a new winning streak tonight. Lake Village Lakeside, Barton (which won 63 games from 1986-90) and Drew Central remain on their schedule.

"First of all, we've got to stop making mistakes," Henry said. "Turnovers have been killing us, fumbles and interceptions, putting our defense in bad spots. We've just been working on ball security and catching security."

The offensive line has shown better protection of its quarterback in recent games, Henry said, but the focus in practice this week has been on the fundamentals of protecting the football.

"Defensively, I feel like if we can keep our team out of bad situations and quit giving other teams short fields, that will give us a chance to get this thing turned around," Henry said.