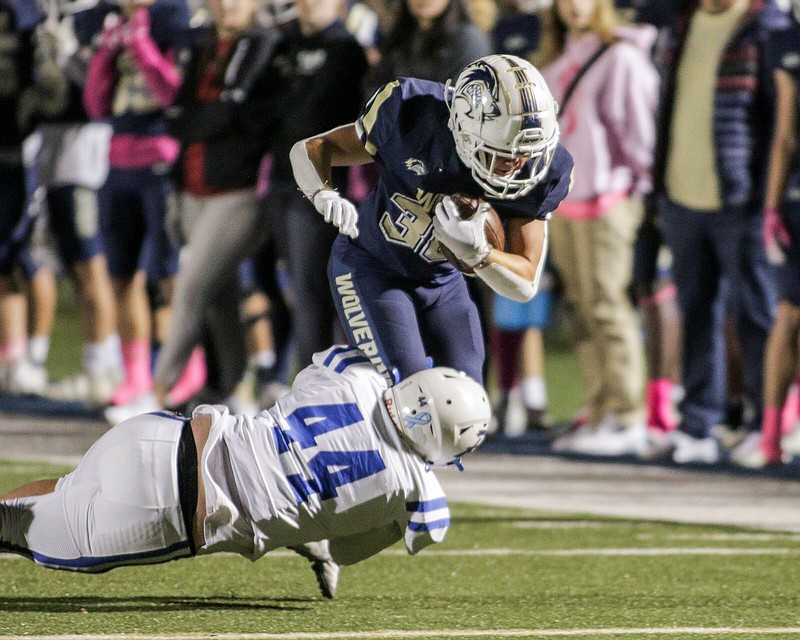 Cole Edmondson of Bentonville West is tackled by Tyler Pinkerton of Rogers during the Wolverines’ 34-21 victory over the Mounties on Friday at Wolverines Stadium in Centerton. (Special to the NWA Democrat-Gazette/Brent Soule)

CENTERTON -- Bryan Pratt might not have scripted the way Friday night's 34-21 win against Rogers played out, but the Bentonville West coach could not have written a better ending.

Backup quarterback Dalton Rice, and backup running back Braden Jones each had a huge impact late in the game to help the Wolverines hold off fast-charging Rogers for a 7A-West Conference win at Wolverines Stadium.

Statistically speaking, Rice's performance was not storybook epic, but the junior who came in for an injured Jake Casey, possibly saved his team from squandering a 21-0 third-quarter lead.

With West (4-2, 2-1 7A-West) clinging to a 28-21 lead with 2 minutes, 30 seconds left, the Wolverines were facing a third and 9 near midfield. Anything less than a first down, and West was likely looking at giving the Mounties the ball back.

Rice took the shotgun snap and saw his receivers blanketed by the Rogers defenders. He decided to tuck the ball and run and fought his way through a tackle to gain 10 yards to move the chains. One play later, Jones tore away from an attempted tackle and ran down the sideline for a 43-yard score that iced the game for the Wolverines.

"I saw the running lane open up, and I knew if I got the first down we secured the win, so I just decided to tuck it," said Rice. "I picked it up.

"It's a great feeling to lead your team, to come in and get a huge win against a really, really great football team ... it's a good feeling."

Rogers (5-1, 2-1) could not get out of its own way for almost three quarters of the game and trailed 21-0 in the third quarter after Casey connected with West receiver Ty Durham on a 31-yard scoring pass with 10:42 left in the third quarter. It was Durham's second receiving score of the game, the first a sensational 71-yard strike where he stiff-armed a Rogers defender to the ground and raced the final 30 yards for the score.

The Mounties did not find the end zone until :02 remained in the third quarter when Marcus Mounce intercepted Rice in the end zone, and Rogers drove 80 yards in 11 plays, capped by Dane Williams' 7-yard keeper that made it 21-7.

"We talked about there was going to be a run in the second half," said Pratt. "We told the kids they'd have to fight through it. We talk about adversity all the time and how you handle it. You've got to be able to ride the ups and downs in a football game and I thought our kids did a great job of that."

Another West turnover set up Rogers for its second score, a fumble recovery by Tye Cunningham at the West 29. Williams hit Graycen Cash for 21 yards on fourth down to keep the drive alive, and Williams scored from the 2 to make it 21-14.

Before the fumble, West receiver Jaxon Brust had an unfortunate drop in the end zone. He made up for that on the next West possession, securing a pass from Rice and pulling away for a 68-yard score to give the Wolverines a two-score lead at 28-14.

"That was big for Jaxon and Braden to put those mistakes behind them and come through when we needed it," said Pratt. "That was awesome for those guys and huge for us."

Rogers later pulled within 28-21 after the Brust score, driving 80 yards in 13 plays, aided by a pass interference penalty. Williams hit Mabry Verser on a 14-yard pass in the back of the end zone with 3:24 left.

Clinging to the one-touchdown lead, Rice made sure Rogers never got another chance with the big third-down run that set up Jones for the clincher.

"He's our backup quarterback, but he's also a kid who has worked his butt off," Pratt said of Rice. "We don't change anything. When he came in there, we did not change the way we call plays. We didn't do anything any different. He's a seasoned guy. In the jayvee games, he's really been working hard. He never complains, and he never questions. He does everything we ask. He got his opportunity and he made the best of it. I had no doubt about him coming in."

Williams was 17-of-32 passing for 152 yards and a touchdown and rushed for 93 yards and 2 additional scores. 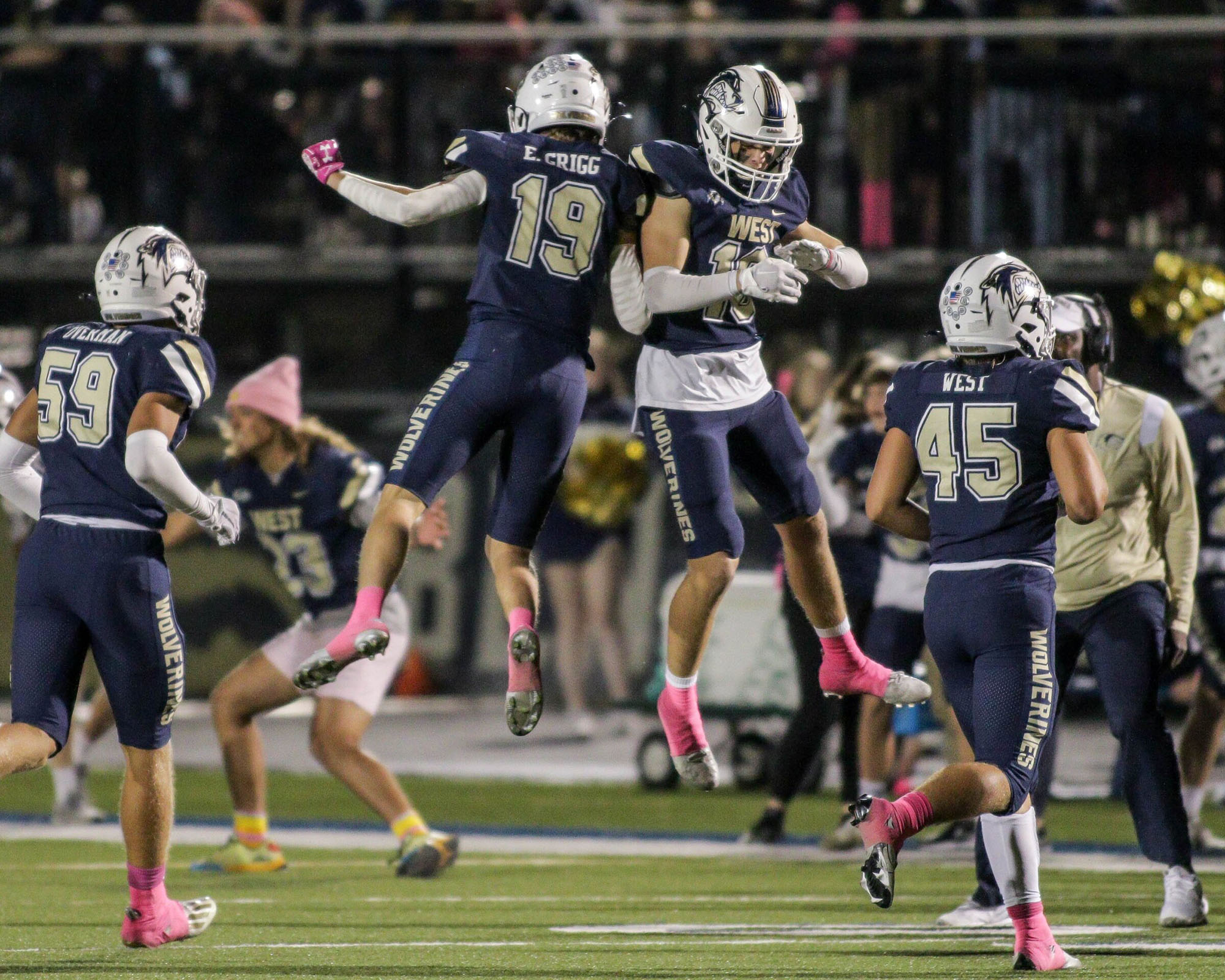 Ethan Grigg (19) of Bentonville West celebrates with teammate Laynce Stroud after intercepting a pass Friday during the Wolverines’ victory over Rogers in Centerton. (Special to the NWA Democrat-Gazette/Brent Soule) 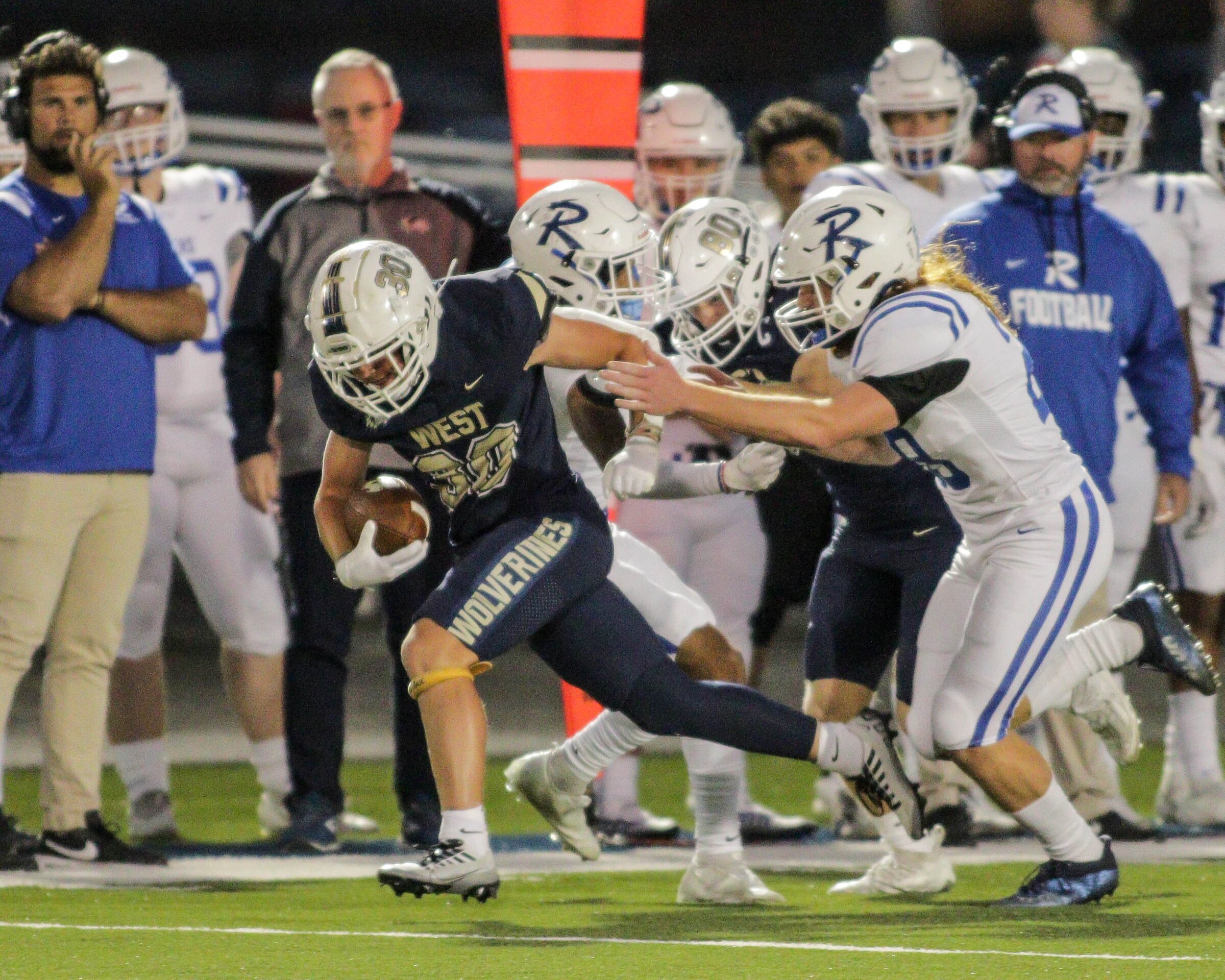