State education, prisons and human services to be topics as budget hearings begin 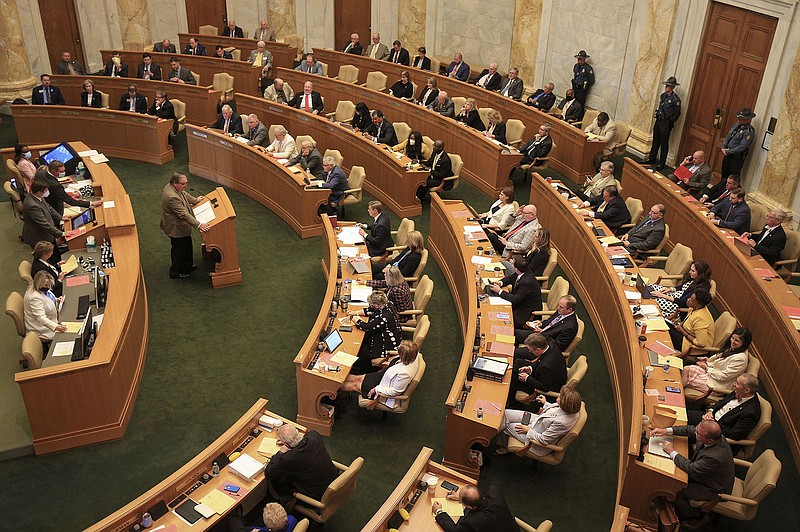 Arkansas state lawmakers will begin budget hearings for state agencies on Tuesday to prepare for the regular session beginning on Jan. 9, and key lawmakers expect the budgets for education and human services programs and prisons to dominate the discussion.

The Legislative Council and Joint Budget Committee will hold budget hearings together that could run through Nov. 21, according to the General Assembly's website.

The Republican governor's successor will be elected Nov. 8 and is expected to be sworn into office on Jan. 10. Republican gubernatorial nominee Sarah Huckabee Sanders, Democratic nominee Chris Jones and Libertarian candidate Ricky Dale Harrington Jr. are vying for a four-year term as governor.

"We have to understand inflation is real and keep the budget as responsible as possible without harming the services we want to provide," said state Sen. Bart Hester, R-Cave Springs, who is in line to be the Senate president pro tempore from 2023-2025.

The budgets for education, human services and correctional programs will be key issues during the budget hearings, he said.

"We have got to build bigger prisons to keep the bad guys locked up," and the state's plan to expand a prison is a good first step, Hester said.

Sen. Jonathan Dismang, R-Searcy, who is the other co-chairman of the Joint Budget Committee, said the state's aim is to keep the state's budget growth below the inflation rate, "but where we need to fund and how to maintain state services, I don't know the numbers at this point."

Hutchinson said in a letter dated June 9 to his department secretaries and directors that by "continuing my vision of transforming the way we operate and improving our tax competitiveness, we will further my goal of growing the private sector faster than the public sector."

"It is important to propose a balanced budget to the next governor that limits public spending, while providing necessary and critical services to the citizens of Arkansas," the governor wrote in his letter.

"The new administration takes office in January and may establish its own funding priorities," Hutchinson said. Thus, he said, "with limited exceptions, I plan to submit a flat base level budget or less to the Legislature that will only include a continuation of the previously authorized two percent [2%] salary adjustment and performance pay increases, [Employee Benefits Division] increases, along with career service payments for state employees for the next biennium."

Asked if there is a particular numerical goal in terms of limiting the proposed state general revenue budget for fiscal 2024 and fiscal 2025 despite the high inflation rate and labor market pressures, Hutchinson said Friday in a written statement that "I expect the agencies' existing budget to absorb inflationary costs but there will have to be some exceptions that relate to health care needs, education and public safety."

Asked if he is factoring any tax cuts into his proposed fiscal year 2024 and 2025 general revenue budgets, the governor replied, "Not at this time."

Hutchinson said his proposed general revenue budgets for fiscal 2024 and fiscal 2025 won't be completed until Nov. 10, "which is the time required by law for the budget to be submitted."

Office of Personnel Management officials have drafted an overhaul of the state's pay plan that is projected to cost about $41 million a year in general revenue and cover about 22,400 executive branch employees.

"The draft pay plan will allow state government to pay employees more comparable to the private sector and will keep pace with inflation rates," Hutchinson said. "The plan will be financed through existing agency budgets and supplemented by the allocated amount in the pay plan."

State government last overhauled its pay plan in 2017. That pay plan was projected to cover 25,000 full-time state workers and cost about $57 million to implement in fiscal 2018, including about $24 million from general revenue, with the remainder coming from other state government revenue sources.

The pay plan adjustment is needed because it will have been six years since the last pay plan and there is high employer demand in an extremely competitive labor market and inflation, according to an Office of Personnel Management summary of the draft pay plan obtained under the Arkansas Freedom of Information Act.

The Office of Personnel Management said it reviewed labor market data for 140 benchmark classifications representing a broad spectrum of employees, jobs and departments and current pay grade ranges are about 20% below the current labor market rate. The draft pay plan would "move to near labor market rate" and "provide for limited seniority adjustments," the records show.

Dismang said the Legislature in the August special session advanced the implementation of individual and corporate income tax cuts that originally were to be phased in over the next few years, so "we need to let things settle before we move forward on new tax cuts" and "determine what we need to maintain existing services in the state."

The state currently has more than $2 billion in reserve funds.

The tax cut package also granted a temporary, nonrefundable income tax credit in tax year 2022 of $150 for individual taxpayers with net income up to $87,000 and of $300 for married taxpayers filing jointly with net income of up to $174,000, and adopted the 2022 federal Section 179 depreciation schedule as it existed on Jan. 1, 2022, which provides an income tax reduction for the expensing of certain property.

But Republican legislative leaders said at that time they wanted lawmakers to consider increasing teacher pay during the 2023 regular session, starting Jan. 9, after the House and Senate education committees complete their biennial educational adequacy review this fall.

Dismang said he hopes for more discussion among House and Senate leaders about educational adequacy.

"I don't anticipate a fight," he said. "I think all members want to head in the same direction, just wanting to know what that path needs to look like."

"These budgets reflect current and forecasted growth rates in enrollment and [utilization] related to the continuation of the public health emergency," he said.

At the start of September, there were 1,121,689 clients enrolled in Medicaid, including 339,297 enrolled in the state's Medicaid expansion program known as ARHOME, Lesnick said. ARHOME is the Arkansas Health and Opportunity for Me program.

"As of Oct. 4, 2022, 347,593 clients have had their coverage extended due to the Public Health Emergency and are at-risk of losing their coverage," Lesnick said, and 117,674 of those are covered through ARHOME.

"We do not know how many of those who have been extended will actually be ineligible for Medicaid, which is why we continue to encourage everyone to update their information," Lesnick said.

The end of the federal public health emergency would mean the state would no longer receive enhanced federal matching rates in certain Medicaid programs and would have to cover an increased share of the cost for the programs, department officials have said.

They have said the public health emergency's end also would mean the state would no longer have to abide by federal limitations that allow states to end Medicaid eligibility only for beneficiaries who die, go to jail or go to prison or who ask to be removed from the programs.

The U.S. Department of Health and Human Services' current public health emergency is set to expire Oct. 13, he said.

"At this point, we still have not received confirmation from the federal government when they will end the public health emergency," Lesnick said Tuesday. "However, they have committed to providing states at least 60 days' notice prior to the end."