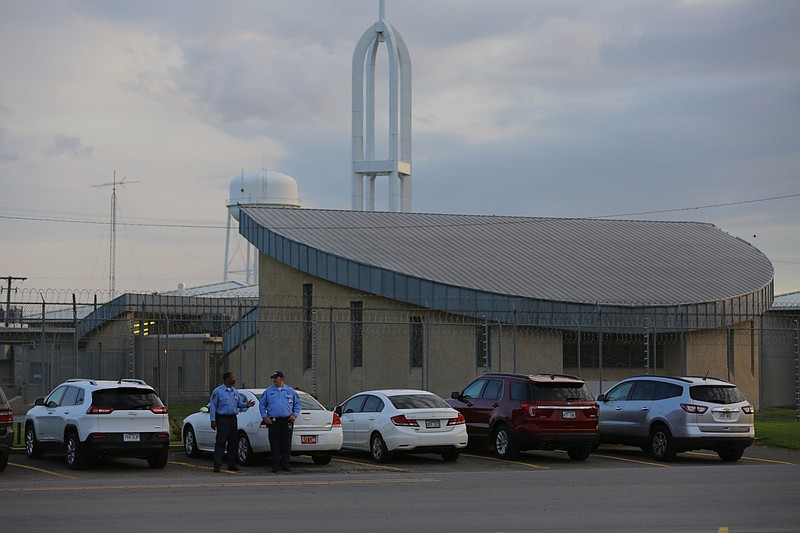 The chapel at the Cummins Unit near Varner is shown in this April 17, 2017 file photo. (Arkansas Democrat-Gazette/Stephen B. Thornton)

The Arkansas Department of Corrections prison seminary program is getting ready to graduate its first class next year even as the program is already looking to expand by raising funds for a new facility as prison officials try to reduce the violence inside their facilities with the help of inmates trained in religious studies.

Last month, the state Board of Corrections approved a request for Colossians 418 Prison Ministries, a 501(c)(3), to raise money to build a prison seminary facility at the Varner Supermax Unit located in Lincoln County. The organization is not allowed to start construction until all the funds for the building are raised.

The nonprofit estimates it will need to raise about $400,000 to build a 6,000-square-foot facility that will include four classrooms, a library and office space.

Dr. William "Dubs" Byers, a member of the Corrections Board who abstained from voting due to his connections to Colossians 418 Prison Ministries, said the group is planning to make pitches to churches while also seeking grants and individual donations.

"I don't know how long it will take to raise the funds. I suspect it will take a couple of years unless we have someone step up with a substantial contribution," he said.

Dexter Payne, director of the Arkansas Division of Correction, said the proposed facility will be a metal building that shouldn't take long to construct if the funds are raised.

"I am not a construction guy, but I would probably say about six months of construction since it's not a very large building," he said.

This building will be part of the prison seminary program that Cindy Murphy, spokeswoman for the Department of Corrections, said is expected to have its first seminary class graduate on May 12.

The state's prison seminary program is currently housed in two rooms in the gymnasium of the Varner Unit. The potential seminary facility will be housed next to the chapel located at the high-security state prison.

The seminary program allows male inmates to work toward earning a Bachelor of Arts in Christian Studies degree through Mid-America Baptist Theological Seminary. It's a four-year fully accredited degree where inmates take regular core courses like biology, college math and history, as well as studying both the Old and New testaments and training in biblical counseling.

"Once they graduate, they will be deployed across the ADC to assist the ADC chaplains in the daily work they carry out," Murphy said.

Dr. Mark Thompson serves as director of the program and is an assistant professor of church history, theology and missions at Mid-America Baptist Theological Seminary.

"Take away the fact that even though a lot of these guys have done some unimaginable things they still have value and they are still usable to the Lord Jesus and can still accomplish good things," Thompson said. "Even though their lives have been marred by some horrible things. The Lord is doing good things behind the walls of the ADC to change the culture and see good things happen in these men's lives."

Chaplain Joshua Mayfield, administrator of chaplaincy services at the Corrections Department, said a dedicated facility for the seminary program is needed because it will allow growth when it comes to future classes.

Mayfield said because of space issues, they are having a class every other year with the number of students limited to 25.

"We would love to be able to accommodate more students and we would love to have more faculty on site to offer the best education possible," he said.

Thompson said if the facility does get built he believes the classes will be filled pretty quickly.

Thompson said if the program moves to four cohorts there will need to be another person on-site to help manage.

"What shape or form that will take we haven't crossed to that yet, but we will cross it when the need arises," he said.

Mayfield said there are similar programs like this across the nation but what makes the one in Arkansas unique is it's geared toward those who are serving long-term sentences.

"We chose to do that because the long-term inmates are highly influential," he said. "They aren't given any type of authority, but it's just a group dynamic. Their influence is rooted, I think, in the fact that these men and women have to make peace with the fact this will be their home for a while and they want it to be as peaceful as it can be."

Mayfield said data shows that change can spread throughout the prison population when the influential sub group becomes healthier.

"They begin to work to help those around them become healthier within this population that can be highly negative sometimes, but this is what this program is about investing to positively help others," he said.

"I can't overstate the significance of having someone who is an encouragement in a prison setting," he said. "For example, when someone gets bad news our chaplain will try to assist that person through the grief process, but in Texas and Oklahoma you have inmates with legitimate training for grief support and the effectiveness of this surpasses what occurs when it's just the chaplains and volunteers. I think this is because you have someone who is living with you and understands the grief process itself."

Mayfield said one of the biggest challenges was finding an accredited program that would allow inmates to receive the same credit as someone on the outside.

"Eventually through discussions at management levels of the Arkansas Department of Corrections, at the Arkansas Baptist Convention and global seminary people we reached an agreement with Mid-America in Memphis to be our partnering agency of higher learning," he said.

Murphy said that in 2019, the Arkansas Baptist Convention and Mid-America Baptist Theological Seminary with the cooperation of the Corrections Department instituted the Field Ministers program.

The goal of the this program is to help change the culture inside the walls of the various units that make up the ADC by training men to lead and minister to their fellow inmates by example.

In order to be considered for the program, these men must have at least 10 years remaining on their sentence, maintain a clean disciplinary record, be committed to helping change the culture in the prison system, and meet certain other academic requirements.

"It was important to be housed at a facility where any type of inmate can go," Mayfield said. "A medium security prison couldn't handle some levels and we wanted lifers to be involved."

Byers said the seminary program is available to all inmates across the state as long as they can pass the application process.

"You don't have to sign any type of religious documents," he said. "Matter of fact, we have had a Muslim attending the program in Varner and there may be those who have no religious affiliation."

Byers said there are some academic guidelines that are required before an inmate can be accepted into the program. He said this includes a high school diploma, a GED or test for basic adult education.

"You can't be actively involved in any gang groups and must make a commitment to live a life of integrity," he said.

Thompson, who does in-person teaching for the program, said a basic day for an inmate in the program is filled with classes.

"You take five classes a semester and one class each day for three hours on set curriculum," he said.

Thompson said the first two years of the program is about completing the core courses like biology, Spanish, literature and other general studies courses. He said by the third year students start taking courses in the New and Old testaments, and biblical counseling.

"The counseling courses seem to encourage the guys the most in the barracks," Thompson said. "It allows them to work through the problems they are facing and they can take their Bible and walk others through their problems, as well."

Byers said the program is at no expense to the state or the inmates.

"It's funded by donations and set up just like a nonprofit," he said. "Up until now the program has been totally funded by the Arkansas State Baptist Convention. They have given us about a $200,000 a year budget, which comes out to be about $4,000 per inmate per year."

Byers said the 501(c)(3) entity was recently created for Colossians 418 to allow it to raise some funds to ease up the burden on the Arkansas Baptist Convention.

"As a nonprofit we can receive grants, private donations and be a little bit more flexible in our fundraising efforts," he said.

Byers said about two-thirds of the students in the program are doing life sentences.

"We are one of the very few programs that seek inmates who are in prison for a long time," he said. "All the other programs are looking for inmates who are getting out in the not too distant future."

Mayfield said this program is trying to equip men who obviously made mistakes in life to do better.

"Some of these men are going to spend the rest of their life in prison and with this program they can become positive influences within the prison and bring about a more peaceful and safer prison," he said. "Some will return to the community and when they do they will be far more invested in being positive citizens and positive members of the community than they were before."