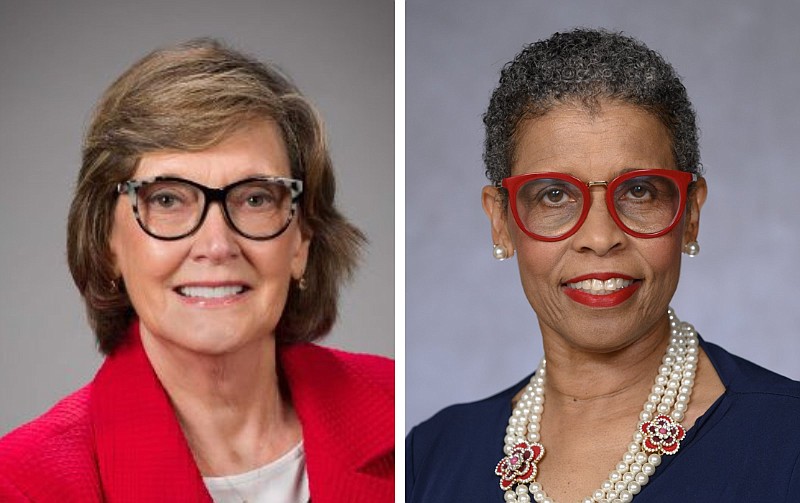 Democrat Jannie Cotton is hoping her message of mental health support and bipartisanship will help her unseat Republican Karilyn Brown for the state House District 67 race in the Nov. 8 general election.

Brown says her engagement in the community and track record representing the district will help her fend off the challenge.

Brown is serving her fourth term in the Arkansas House and has previously served as a justice of the peace in Pulaski County.

House District 67 encompasses large parts of Jacksonville and Sherwood after redistricting removed stretches of North Little Rock from the district.

All 100 House districts were redrawn last year after the 2020 U.S. census. Some neighborhoods previously represented by Brown were moved into other districts, while other neighborhoods moved into the reconfigured District 67.

Both candidates believe the redistricting will help their chances.

"I was nervous about redistricting at first because you hear all the stories about gerrymandering and those type of things, but when I have been out there and saw it with my own eyes I think it helps me," Cotton said. "I am meeting people who knew me when I was providing mental health and substance abuse services, and they were excited to see I was running. I think we have a more captive audience with redistricting."

Brown, 72, said with redistricting her new footprint includes voters and neighborhoods in Jacksonville that she needed to become acquainted with.

"Fortunately for me, I did graduate from Jacksonville High School, and I belong to the Jacksonville Chamber of Commerce and still attend church, do business, and have family in Jacksonville, so I have maintained a bond with Jacksonville over the years," she said. "I have lived in Sherwood for 37 years and raised my son here, so I'm encouraged to support the communities I have been most engaged in during my life."

Cotton is a retired CEO for a mental health organization and is currently the chairperson of the Delta Presents Outreach Foundation, a nonprofit serving youth throughout Pulaski County and surrounding areas.

Cotton said she is running because throughout her career she witnessed too many people lacking services because of funding cuts.

"One of the reasons I am running is because those without a voice sometimes are not heard, or people don't seek out their opinions, especially those who are less fortunate or feel like their vote doesn't matter, and I want to be the one who represents them," she said.

She said one of the top things she wants to work on is mental health services across the state.

"I want to get mental health services to our seniors and veterans," she said. "I feel like they have paid their dues to society and we owe them. I don't want people to have to decide between putting food on the table or their mental health."

Brown said that during her tenure as state representative, she has continued to be a voice for the people.

"No candidate can be an expert on every topic that comes before the Legislature; however, I have the experience and voting record that reflects the values of my district," she said.

She said she is proponent of respecting parental rights and protecting the family.

"We are seeing some radical challenges to the family structure, parental rights, and protecting the innocence of our youngest and most vulnerable -- challenges we have not faced in this country or throughout the history of Western civilization," she said.

Both candidates said reducing crime would be a top priority.

She said prison overcrowding, lack of educational achievement and inadequate job opportunities for young people are contributing to the level of crime on the streets.

"Crime is a big problem that must be addressed on many fronts," she said.

Cotton said to address the crime problem around the state there must be more dialogue.

"We need to come up with plans to engage people," she said. "It goes back to mental health and the mindset of others. When you feel like you are being talked down to or in a place of hopelessness where you can't feed your family, then you are going to do desperate things."

She said bringing more people to the table when it comes to policy decisions can help avoid some of the unintended consequences that can lead to crime.

"You can't have legislators and leaders in charge and making decisions without including the people that it will affect," she said. "I have told legislators before when I was a CEO that you don't want to wait until someone comes to you door to rob you or blow out your tire, but help them before they get to that state of mind."

Cotton said education also needs to be a top priority. This starts with ensuring teachers get a raise, she said.

"Anybody that helps others -- and this includes teachers, mental health professionals, those who serve children, the less fortunate or the disabled -- needs to get paid," she said. "They already work hard, and I think they should be paid their worth."

Brown said she has voiced her support for and voted for the House Education Committee proposal to raise all teacher salaries by $4,000, which would be provided for in the upcoming legislative session.

"As the Legislature has raised teacher salaries in every session since 2015, I believe we will continue to do so," she said.

She said she favors all options when it comes to school choice because she believes the state should place their focus on students, not institutions.

"We must open the doors to opportunity for all students," she said. "Some students enjoy school choice because their parents can afford private or parochial schools for their children, and some parents make tremendous sacrifices to send their children to receive a private education. Other families may move to communities where the public schools are safer and have a better track record. All our schools need to provide a good education for all of our students, and every parent should have the same education opportunities for their children no matter their ZIP code."

Cotton said she is a product of public schools but believes parents have the right to choose their child's education.

"I believe in public schools, but I also have seen where lack of funding or whatever reason has caused parents to want their children in other schools," she said. "As a parent and a grandparent, if I feel like my children's needs are not being met I should have a choice. I would rather it be public schools, but I would want public schools to be funded and have quality of care for students so families don't have to choose another alternative."

Arkansas Attorney General Leslie Rutledge implemented earlier this year a 2019 "trigger law" that bans abortions in Arkansas, except to save the life of the mother in a medical emergency, after the U.S. Supreme Court overturned the landmark 1973 ruling in Roe v. Wade that legalized abortion across the nation.

Act 180 of 2019 was crafted to take effect when the state attorney general certified that Roe had been overturned, returning to the state the authority to prohibit abortion.

Brown said she is pro-life from conception to natural death.

"I voted for the current law, and I do not wish to change it," she said.

"I am real upset because it's so restrictive," she said. "If someone is raped or there is an instance of incest, we are telling them to just live with it. I think that is not right."

The state's Medicaid expansion program ARHOME -- which stands for Arkansas Health and Opportunity for Me -- took effect this year. It replaced Arkansas Works and will end Dec. 31, 2026, under a waiver approved by the U.S. Centers for Medicare and Medicaid Services.

Cotton said she wants to see the program extended and expanded.

"I have seen children get more assistance because of this program," she said. "I think it should always be an option. At some stage of your life, you are going to need some type of help even during your best of days. Something traumatic can happen in your life where you need immediate care or assistance and that help should be available."

"I'm not prepared to make any sweeping changes at this time, but I'm sure the system has room for improvement," she said. "I am currently on a task force to study the growing mental health problems in Arkansas. One problem facing low-income Arkansans is that the mental health reimbursement rate is causing providers to turn away these patients, and many providers are moving to private practice."