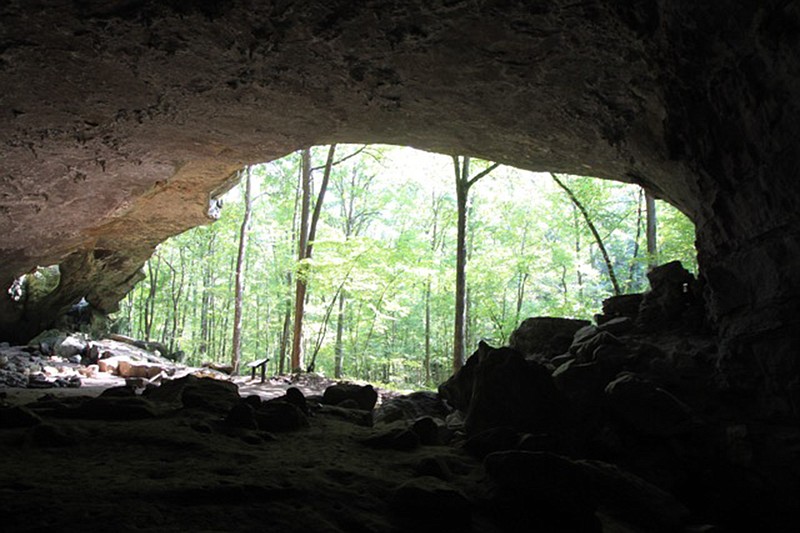 A view from the dark, cool interior of the Indian Rockhouse, the highlight of the hike at Buffalo Point on the Buffalo National River. The sound of a stream flowing at the depth of the cave is clearly audible. (Special to the Democrat-Gazette/Frank Fellone)

BUFFALO NATIONAL RIVER — The deer appeared early in our hike down to the Indian Rockhouse Trail, not more than five minutes' walk from the trailhead.

It saw us, scooted into the woods to the right of the path, turned around and looked. Deep in the brush, it stood still but then perked up its ears at the sound of a camera shutter, turned its head and heard another click, then vanished into the forest.

That was one of many moments to be enjoyed on this hike of 3.5 miles or so at Buffalo Point, about 125 miles from Little Rock. (See arkansasonline.com/1010trail.)

The National Park Service describes the trail as moderate to strenuous. The strenuous part is the second half, when the trail turns uphill. In the heat of late summer, walking flights of stone steps is especially taxing.

[Gallery not showing above? Click here to view: arkansasonline.com/1010woods]

The highlight of the hike is the Indian Rockhouse, said by the National Park Service to have sheltered humans as far back as 7000 B.C. Excavations in the 1930s revealed stone tools, basketry and the remains of food. No more excavations or collections are allowed, the cave having become part of the Buffalo National River in 1972.

Pets aren't allowed on this hike. People are, but only a few were heard and not seen on a Friday morning in September.

Make plenty of time to stop at the natural washtub, a circle of rock carved out of Panther Creek that's full of cold water and a relief to tired and sweaty feet. Watch out for nippy crawdads.

Full body relief is available about a mile away at Buffalo Point, which accommodates both day-trippers and campers. The river is cool and clear, and overlooked by a mighty bluff.

What could be better? Only fall and color to come.