Bentonville to host Bikeboom for 100-plus deaf cyclists 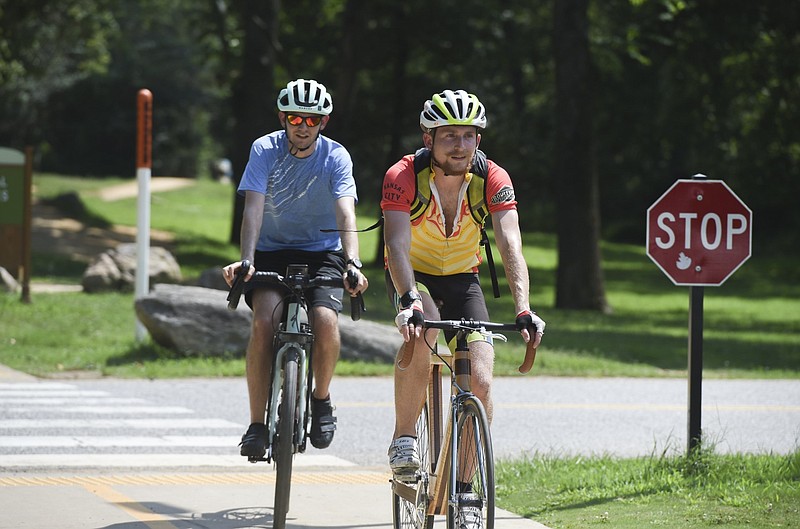 Two bicyclists ride along the Greenway at the North Bentonville Trail in Bentonville in this July 30, 2021 file photo. (NWA Democrat-Gazette/Charlie Kaijo)

BENTONVILLE -- More than 100 deaf cyclists from across the country will be here this week to travel the city's mountain bike trails.

The deaf social cycling event Bikeboom Series will be filled with skills clinics, group tours, volunteering and panel discussions to learn more about deaf experiences, according to a news release. Bikeboom starts Thursday and is hosted by the U.S. Deaf Cycling Association.

People with disabilities represent the largest minority group in the world and have been left behind in the outdoor recreation industry, the release stated. Deaf individuals also have been underserved, making it difficult to afford a mountain bike or find riding partners who communicate with American Sign Language, according to the release.

American Sign Language is the main language among deaf schools and deaf communities. It is better understood with the use of eyes, hands and expression, said Hugh Carey, the event's media coordinator.

"You will see lots of flying hands during Bikeboom, as if you are in a different country with its own language," he said.

The event was made possible by the Walton Family Foundation, Ozark Outdoor Foundation and Visit Bentonville to ensure bike rentals are free and help with other expenses so deaf cyclists can converge and grow the sport in the deaf community, according to the release.

During the event, there will be seasoned deaf riders with group rides exploring the trails. There will be some volunteering, such as trail building as well as skills clinics, Carey said.

The Bikeboom Series, led by Sisson -- who's based in Austin, Texas -- sees Bentonville as the Disneyland of mountain biking, Carey said. The area is a great place to introduce mountain biking to deaf beginners, he said.

Carey said the Bikeboom Series will be an annual event with different locations each year to grow each local deaf biking community.

Deaflympian medalists John Klish of Grand Junction, Colo., and Paul Wood of Washington, D.C., will lead a panel discussion from 6-8 p.m. Thursday at The Hub, 410 S.W. A St., according to the release.

Ciara Logan of Bentonville, who played a huge part in organizing the Bikeboom event, and Bridget Berrigan, of Manor, Texas, who biked 4,270 miles across the nation with two other deaf women, will join the discussion. All panelists are deaf and sign language interpreters will be provided, according to the release.

"You don't often find many deaf cyclists in a community of deaf people in a city," Sisson said. "Bringing them all together from all across the world makes a meaningful impact. Where these deaf folks can learn and enjoy other people like them on bikes."

Print Headline: Bentonville to host Bikeboom for 100-plus deaf cyclists