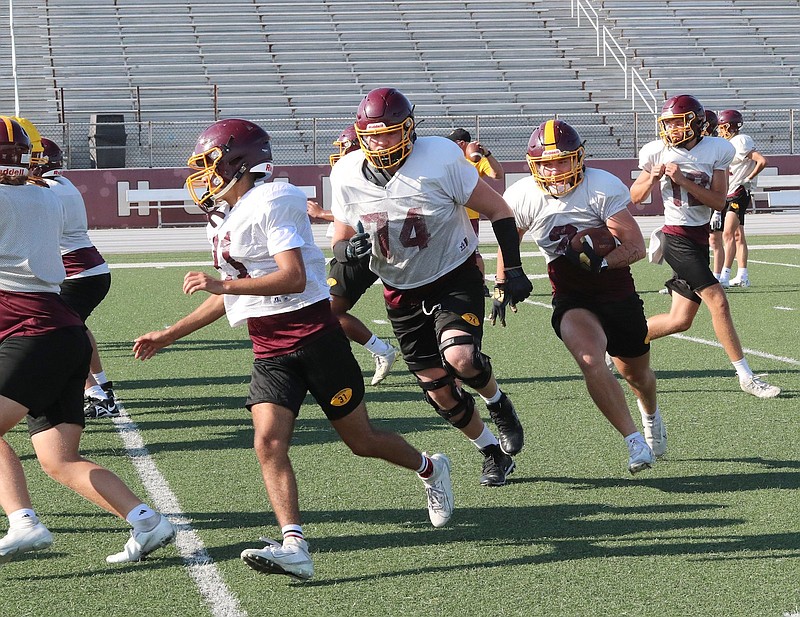 GREENWOOD -- Smith-Robinson Stadium will host the biggest game in the state on Friday night.

That's exactly the way the Bulldogs like it, too.

"We like being the big game in town," Greenwood coach Chris Young said. "We like playing good football teams."

The Wolves feature a new-look offensive attack that includes the forward pass with the emergence of junior southpaw quarterback Easton Hurley.

"They started him against us last year," Young said. "It adds a new dynamic to what they do when they can throw the ball, and he's done a great job of it."

Hurley threw a single-game school record six touchdown passes, all in the first half, three weeks ago against Siloam Springs, throwing for 305 yards but Hurley can also run.

"Easton's a great quarterback," Lake Hamilton coach Tommy Gilleran said. "We're proud of him. He can do those things, and he can run a little bit. He gives us options on offense."

"They're so unique in what they do, and they have such an advantage because they work on that 12 months a year," Young said. "We're a little bit fortunate this year because we had the bye week before so we had a few extra days to work on them. It's just something you don't see throughout the year anymore. They do a great job of executing it."

With Lake Hamilton's clock-controlling offense, games are also different than most that Greenwood plays each season.

"It's a different football game," Young said. "Normally, we get about 12 possessions per game. Normally, when we play these guys we get about eight so it makes everything more important."

Crutchmer is an all-around threat. Two weeks ago at Van Buren, Crutchmer ran for four scores, caught a touchdown pass and returned an interception for a touchdown. Martin adds a power threat to the Wolves with 8.3 yards per carry.

"He's finally back to healthy," Gilleran said. "When he's healthy, he's hard to stop. With all of those guys, we have a chance to be pretty good."

Senior linebacker Evan Williams leads Greenwood with team highs of 61 tackles and six for loss. He also has one interception, which he returned 90 yards for a touchdown against Van Buren.

The Bulldogs are 7-0 against Lake Hamilton, and none of the games have been closer than 10 points. In three games at Greenwood, Lake Hamilton has managed just one touchdown, and Greenwood has outscored the Wolves by a 122-10 count.

"It's at Greenwood, and it's hard to win at Greenwood," Gilleran said. "Our goal is to win the conference and to win a state title. Then we'll try to conquer the giants down there."

Ozark also hosts the first of three prime-time games in the 4A-1 with Gentry visiting Hillbilly Stadium on Friday.

Ozark, Gentry and Elkins are undefeated in the conference.

Ozark (4-2, 3-0) has faced passing threats this season but Gentry's Chris Bell has thrown 23 touchdown passes this season, second only to Pulaski Academy quarterback Kel Busby, who's thrown 24, in the state.

"Their quarterback can throw and run," Ozark coach Jeremie Burns said. "He's a threat running. It's going to be a challenge for us."

Bell has thrown for 1,572 yards and run for 447 yards and 10 touchdowns. Three weeks ago against Pea Ridge, he accounted for eight touchdowns with five touchdown passes and three rushing scores.

Maybe more than anything, though, is how good Gentry (6-0, 3-0) has been in the trenches this season.

"They're real physical up front on the offense and defense line," Burns said. "They run the ball real good. Up front, they get after you."

"He really stands out," Burns said. "They do different stuff as far as three-front, or a 4-3, and they're going to blitz a lot. Assignment-wise, we need to know where our hot route is, and really pick up the blitzes."

Ozark has steamrolled its first three 4A-1 opponents, beating Berryville, Green Forest and Lincoln by a combined 156-50, including a 64-21 romp past Lincoln last week.

"We were able to run the ball with him last week," Burns said. "We did some different stuff on the offensive line that kind of gave us some extra holes there. We matched up with them pretty well. We had some good blocking, and he was able to bust through there. It was a good night for him."

The Mavericks host Rogers Heritage on Friday in what could determine their post-season fortune.

Southside is still looking for its first 7A-West victory after opening with the three teams sitting on top of the conference; Rogers, Bentonville and Fayetteville.

Heritage does have a come-from-behind win over Springdale Har-Ber two weeks ago, but a Southside win would give the Mavericks the head-to-head tie-breaking advantage if it comes down to that.

Southside still has trips to Springdale Har-Ber and Bentonville West to end October before playing the regular-season finale at home against Springdale, which also looms as a game with playoff implications.

Junior running back Isaac Gregory had his fourth 100-yard rushing game of the season in Friday's 60-20 loss at Fayetteville with 144 yards on 25 carries with touchdowns of 2 and 14 yards.

Gregory has rushed for 855 yards and 10 touchdowns.

John Parkinson had two sacks for the second game in a row and has 10 for the season, and Evan Shelby recovered a fumble.

Friday's home game against Hackett poses some threats to the Tigers and their undefeated 3A-1 record.

First, is a dangerous Hackett (1-6, 0-3) team coming off three losses to start conference play and then it's also homecoming night in Charleston (5-1, 3-0).

"They've got everybody back that's been hurt the last couple of weeks," Charleston coach Ricky May said. "Then it's homecoming for us. I tried to get them to do homecoming against Cedarville, but they wanted to do it later in the year."

On top of that, the game of the year in the 3A-1 has been marked since the summer with Charleston traveling to Booneville on Oct. 14.

"That makes this game scary, too," May said. "And, they can put up some points when everybody's healthy."

Quarterback Cole Ketchum has thrown for 1,501 yards and 16 touchdowns in six games with Brycen Hamilton snaring 39 passes for 665 yards and seven scores in just five games. Ketchum threw for 435 yards and five touchdowns against Booneville.

Charleston's defense has been sack monsters this season with 19. Bryton Ketter leads the way with five, and Wiley Carroll has four. Reese Merechka leads the Tigers with two interceptions, returning one for a touchdown.

"We've got to be more consistent," May said. "We might may stuff them on four drives then give up a drive. When we get that fixed, we'll be alright."

The Jim Rowland River Valley Run, sponsored by the River Valley Fellowship of Christian Athletes, will be held on Nov. 4 with a new competition in honor of the 15th year of the event.

"Both principals are FCA-friendly," Simon said. "Jeff Prewitt runs a coach's bible study and has done that for three years. Chris Carter is back in his hometown and has been involved in athletics and loves FCA. We sat down with them two months ago and asked them to drum up as many runners as they could to run the 5K, and we came up with this competition. Whoever wins that, Coach Rowland will present them with an award. It's a good way to involve the schools."

On race day, participants will have a chance to show which school they're supporting by wearing a red shirt for Northside, a baby blue shirt for Southside or a white shirt to support both schools.

Also new this year, a 1 mile walk/run will be held to help raise awareness for athletes with disabilities.

The 5K, 10K and 13.1 runs with 14 age groups will begin at 8 a.m. with a staggered start in downtown Fort Smith in the Bakery District.

Fields of Faith, also sponsored by the River Valley FCA, are also currently taking place. Van Buren and Southside will host events on Oct. 19. Earlier this week, Alma, Russellville, Sallisaw, Danville, and Mansfield held their annual Fields of Faith. Stigler and Charleston is scheduled for Nov. 2.

The Future School of Fort Smith is the first in the River Valley to tipoff basketball season, traveling to the New School in Fayetteville on Oct. 17 before hosting Life Way Christian on Oct. 18.