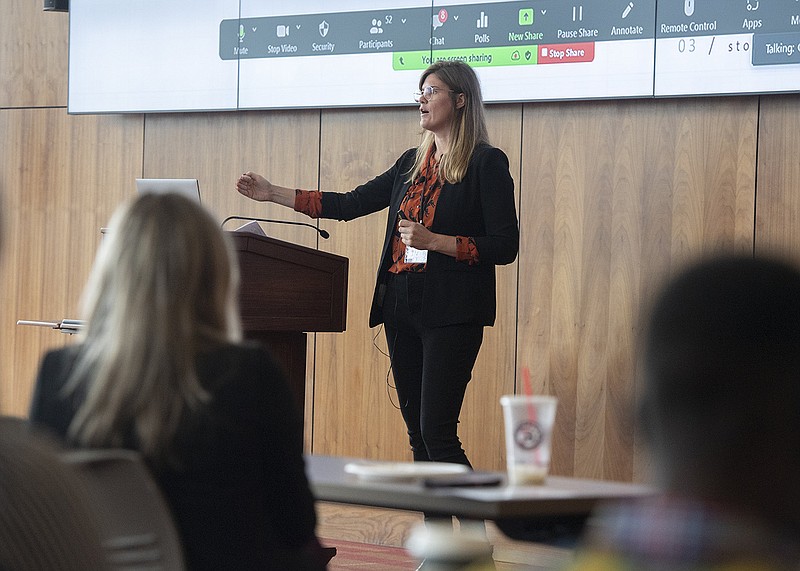 FAYETTEVILLE -- Poultry welfare has become more important to consumers and producers in recent years, and it's a critical issue in Arkansas, which leads the nation in poultry production, said Shawna Weimer, director of the Center for Food Animal Wellbeing, which is part of the University of Arkansas System's Division of Agriculture.

Therefore, it made sense to focus on poultry welfare for the Center for Food Animal Wellbeing's eighth symposium, conducted Wednesday for the first time since 2017 at the Don Tyson Center for Agricultural Sciences, Weimer said.

Tyson Foods -- headquartered in Springdale and the largest poultry-producing company in the world -- "is pretty progressive with animal welfare efforts, but animal welfare is a holistic approach [that requires] different partners with different perspectives" to collaborate, Weimer said.

Bringing those diverse partners and perspectives together is a key element of this symposium, and it's especially crucial to have students in the mix, she said.

"We're training the next generation of animal welfare leaders."

Chrysta Beck and Jossie Santamaria, both University of Arkansas, Fayetteville graduate students in the poultry department focusing on immunology, were among those who attended Wednesday, and both were glad to have a symposium like this in their "own backyard."

"Animal welfare, and the role it plays in immune response, is very interesting to me, and I don't have a big background in animal welfare," so the symposium will fill some knowledge gaps, Beck said. "It's good to have, for sure."

This "exposure is very helpful when designing experiments, because we care about our birds, and we want them to have a good quality of life," Santamaria said. "It's really cool to see people from all different backgrounds here to inform and participate."

Weimer, David Caldwell, director of the Center of Excellence for Poultry Science, Dallas Wynn, senior manager of animal welfare for Tyson Foods, and several others spoke on various topics pertinent to the poultry industry Wednesday, with poultry welfare the overarching theme.

Elizabeth Bobeck, for example, discussed her research on the immune health of birds, as well as the impact of lasers in poultry pens.

"The poultry industry is incredibly flexible, responding very quickly to consumer changes, and I don't see that as much in other industries," said Bobeck, an associate professor at Iowa State University, whose work focuses on improving poultry health and welfare via nutrition, the immune system and occupational enrichment. Over the past 10 to 15 years, the "huge change" has been an emphasis "on a healthy bird."

Using Seahorse metabolic assay -- which measures cellular functions in real time -- Bobeck and her team have observed changes in the immune system of chickens through experimentation, including diet manipulation, she said. "We care so much about the immune status of birds, because there's a direct link between how the immune system is functioning and the health of the bird."

By experimenting and studying laying hens -- chickens raised for their eggs -- Bobeck and her colleagues observed that three days (which has been the industry recommendation) of acclimation for birds who are moved from one environment to another isn't enough time.

"Acclimation periods are critical for immune response, and three days isn't enough time to acclimate from a metabolic response standpoint," she said. "A smart thing for experimenting is seven days or more."

Bobeck also discussed her research using infrared lasers with chickens, who "love it."

"They hunt and peck at it," said Bobeck, who has a Ph.D. in Animal Science from the University of Wisconsin and has completed post-doctoral work in applied poultry nutrition and human immunology and transplant biology. "So far, we've seen improvement in performance -- birds are more active" -- as well as breast-meat quality.

Though relatively few birds in a given pen actually play with the laser, there's 20%-60% more movement among the flocks because of those few who interact with the light, which "is good," but "if they want to rest, they can still rest," too, she said. "We don't want to force exercise."

Birds "don't seem to get bored with the laser, and this is not a stressful thing," she said. "They choose to play with it."

The laser moves relatively slowly, and it pauses for birds to peck at it before moving again, but "we don't put it on the walls, because that scares them quite a bit," she said. "Our goal is to initiate play and curiosity, not fear," so they keep the laser on the ground and in certain areas of a pen.

"We selected red because it's a 'tasty' color," she said. Green "could blind a human or a bird."

Leonie Jacobs and her team have also utilized lasers with chickens, along with other "environmental enrichments," from platforms, perches, and straw bales to colored balls, mirrors and hanging heads of cabbage, said the assistant professor in Virginia Tech University's School of Animal Sciences. "Choice is very important for animal welfare -- they can choose to eat, rest, explore, etc. -- and environmental enrichments benefit [their] health."

Jacobs and her colleagues applied human cognition tests to their subjects to measure affective states, which have an impact on decision-making in humans and birds, and through various experiments with fast-growing broilers -- chickens raised for meat -- Jacobs and her associates witnessed calmer and happier birds from more enriched environments, she said.

With nearly 6 billion pounds annually, Arkansas is No. 2 in the country for total pounds of broiler meat produced, and the state boasts more than 2,400 broiler farms, according to the Arkansas Farm Bureau. Poultry is the largest agricultural product in Arkansas, in terms of cash receipts, providing nearly 40% of the annual total, and poultry production accounts for 25% of agriculture jobs in this state.

Beck was particularly intrigued by Bobeck's discussion of seahorse metabolic assay, and it prompted further study for her, she said. "I want to read more about that on my own time."

Santamaria appreciated the use of lasers to stimulate play and curiosity with chickens, he said. "As humans, we value activities that are playful, and we should not take that for granted with animals."

Though this symposium had been dormant for several years, Weimer plans to make it an annual event going forward, she said. "We're going to be innovative, and next year it'll be multi-species, not poultry only."

The Center for Food Animal Wellbeing team works closely with three units within the University of Arkansas System Division of Agriculture, the Center of Excellence for Poultry Science, the Department of Animal Science and the National Agricultural Law Center, according to the university. The goal is "to improve animal health, handling, and productivity through husbandry practices that optimize animal welfare."