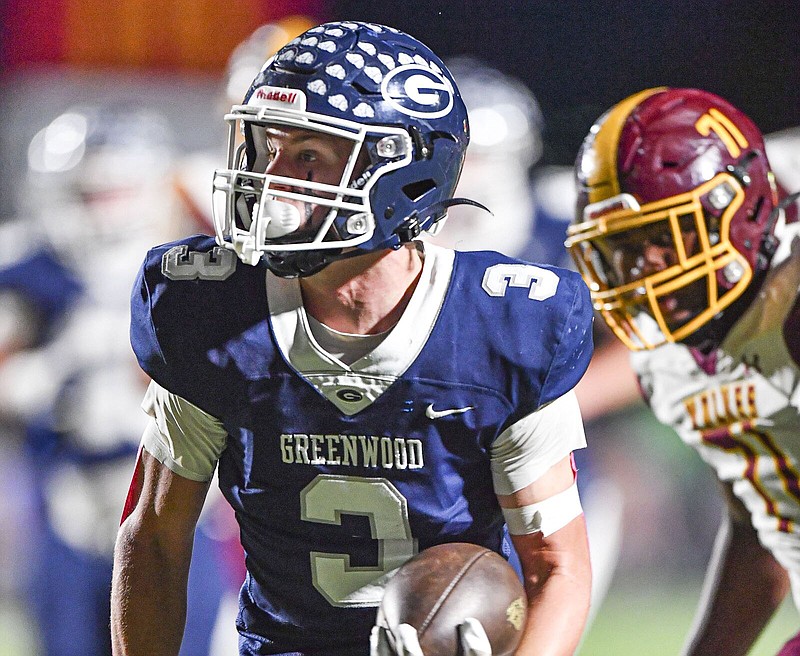 GREENWOOD -- The Greenwood offense turned a little conservative Friday night, but the defense was anything but that.

The Bulldogs completely stifled Lake Hamilton's run-centric offense in a 24-0 victory at Smith-Robinson Stadium in a game between 6A-West contenders.

"Lights out," Greenwood Coach Chris Young said. "Lot of preparation, but it's not just those 11 kids and the coaches, the scout team was unbelievable the last two weeks. They got pounded on and hit every day in practice, and just did a great job getting our defense prepared. It takes a lot more than 11 guys to be successful, and we won as a football team."

The win could set up a big game at Smith-Robinson Stadium in two weeks with Pulaski Academy, although Greenwood must travel to Russellville next week.

On Friday, Greenwood punted on the opening possession after three plays that netted 2 yards, but the Bulldogs scored on three of four possessions to end the half to build a 21-0 lead.

Greenwood drove 92 yards in eight plays to take a 7-0 lead on its second possession.

Houston connected with Peyton Presson four times in the drive and then pumped and hit Robins deep for a 31-yard gain to the 1. Jake Glover powered in on the next play with 6:35 left.

After punting on the next drive, the Bulldogs went quick strike right before the half to push the lead to 21-0.

Houston hit Presson at the sideline for a gain of 12 before hitting Karnes across the middle. Karnes shrugged off a couple of defenders and raced 63 yards for the score with 56 seconds left before halftime.

The Bulldogs were driving to add more on the opening series of the second half but lost a fumble, which Lake Hamilton's Justin Crutchmer recovered, at the Wolves' 15.

Greenwood added a 22-yard field goal by Bodey Steinfeldt with 9:29 left in the game.

The Bulldogs relied on Glover and the run game mostly in the second half.

"Part of that was based on the situations," Young said. "You're up 21-0 and you're playing a good football team that you're getting after pretty good. The last thing you want to do is turn it over. We just decided we were going to run the ball. That was more play calling than the kids not playing well."

Lake Hamilton had one sustained series, driving to Greenwood's 24 with gains of 21 yards by fullback Kendrick Martin, and 20 and 28 yards by Izic Clenney. The Wolves overcame a holding call and a sack on the drive, but turned the ball over on downs with 4:43 left.

Lake Hamilton finished with 43 plays for 166 yards with almost half on that lone drive.

"They run sideways," Lake Hamilton Coach Tommy Gilleran said. "They don't come up field, they try to run sideways with you. In our offense, we have to get on people and stay on them. We didn't do that. We didn't block very well."

Clenney finished with 12 carries for 86 yards.

Houston was 18-of-23 passing for 255 yards, with just six attempts and five completions in the second half for 48 yards.