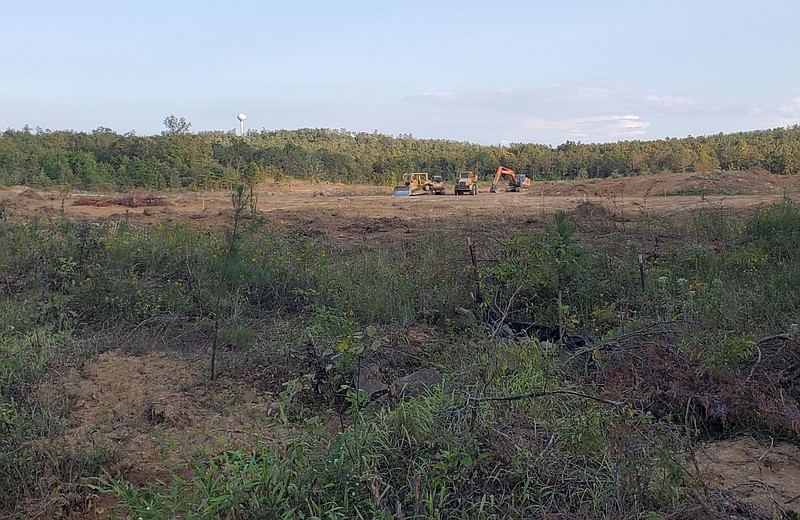 The land for Paradise Valley Subdivision, phase 1, in northwestern Pulaski County is shown in this 2021 file photo. The planned 76-tract home development on the south side of Roland Cut-Off Road, along with its wastewater treatment plant, have raised concerns from neighbors and environmental groups about the affects it will have on the nearby Mill Bayou. (Arkansas Democrat-Gazette file photo)

A Pinnacle Mountain neighborhood coalition and nine Roland families are asking a Pulaski County circuit judge to stop a proposed sewer plant, part of a residential subdivision development project, even as state regulators are considering the plant's construction application.

The plant's opponents, led by the Pinnacle Mountain Community Coalition, a not-for-profit landowner and residents' group, warn that the proposed discharge of treated sewage puts Mill Bayou at risk for contamination. Wells at the bayou are used by Maumelle Water Corp to serve 1,200 households around Roland.

According to the lawsuit, stormwater runoff already creates flooding issues in the area, and that problem, when combined with existing runoff mitigation efforts, would be made much worse by the plant's proposed discharge. Stormwater runoff carries pesticides, herbicides, fertilizers and animal wastes among other contaminants, the suit contends.

The state Department of Energy and Environment is reviewing the plant's permit. The agency conducted a public hearing on the permit application in May that saw dozens turn out to denounce or endorse the proposed plant, which would serve the planned Paradise Valley subdivision.

The 42-page lawsuit, filed last month and announced on Friday, before Circuit Judge Alice Gray targets two groups: developer Rick Ferguson, with the six property-development companies he is said to own or control, and Pulaski County regulators who approved the 76-home, 20-acre subdivision on Roland Cut-Off Road.

The plant would rest on a 30-acre tract across the road from the subdivision. The families who are suing all live on or next to Roland Cut-Off Road between Arkansas 10 and Roland.

Ferguson has defended the plant as environmentally sound. He says the subdivision is needed to meet a growing demand for affordable homes in the area and that he plans to offer incentives to members of the military, law-enforcement officers, teachers, firefighters, public officials and healthcare workers.

The plaintiffs are asking the judge to overturn the county planning board's approval of the project, granted in February 2021, claiming the regulators did not have all of the materials required by the county's development code to grant that approval, particularly provisions for sewage disposal, drainage and flood control as well as letters of approval from fire departments and utilities. They want the judge to re-start the county application and review process.

Further, they are asking the judge to deem the project a public and private nuisance that "unreasonably interferes with the use and enjoyment of the lands of another [landowner] and includes conduct on property which disturbs the peaceful, quiet and undisturbed use and enjoyment of nearby property."

They also want the judge to order the defendants to commission a study of the stormwater runoff problems, figure out how to stop or minimize flooding on their land and then pay for such plans being carried out.

The plaintiffs say clearing land for the subdivision is already underway. They want the judge to order work halted until this litigation is resolved.

CORRECTION: The proposed sewer plant near Roland is not in the Lake Maumelle watershed and poses no risk of contamination to the lake or the Maumelle River. An earlier version of this story incorrectly stated otherwise.