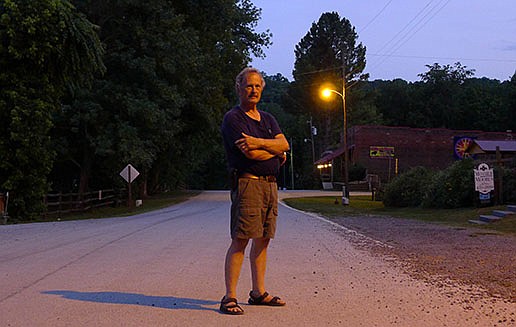 Mitch Mortvedt stands in the middle of Frost Street in Gilbert in 2018 as a high-pressure sodium streetlight glares down the block. Mortvedt, then Gilbert’s mayor, helped in the five-year effort to replace all 16 of those lights in town with lower-impact LED lighting. (Arkansas Democrat-Gazette/Bill Bowden)

They've begun to see the light in Gilbert.

After five years, the tiny town on the Buffalo River has replaced its high-pressure sodium streetlights -- all 16 of them -- with LEDs in an effort to cut down on light pollution.

Bruce McMath blamed it on "barnyard lights" -- the kind of vintage bulbs and fixtures that spray light in all directions and obscure the view of things like planets and stars.

McMath is chairman of the Arkansas Natural Sky Association. He worked with Gilbert to make some changes.

Gilbert is following in the footsteps of the Buffalo National River, which became the first International Dark Sky Park in Arkansas in 2019 after a two-year effort.

It just made sense for Gilbert, the only incorporated town in the national park, also to embrace the darkness.

"There was every possible delay that could be conceived of," said Mitch Mortvedt, who was mayor of Gilbert for 15 years, until 2020. "I feel fortunate we got where we did."

Mortvedt said Gilbert is also the smallest incorporated town in Arkansas. Founded around the turn of the 19th century, Gilbert's population peaked at 116 in 1930, according to the Encyclopedia of Arkansas.

Gilbert first got electric streetlights in the 1970s, when Mortvedt's grandmother, Ethel Myers, installed them during her tenure as mayor.

Mortvedt said he got the idea to change Gilbert's street lights from Cassandra Johannsen, a park ranger at the Buffalo National River. They invited McMath to make a presentation on the subject.

From that moment on, McMath said it seemed like the townspeople of Gilbert were on board.

With better control over its street lighting, residents and visitors would be able to more clearly see things that our ancestors took for granted, like the Milky Way.

But it's still there at Gilbert. At night. Overhead. A black backdrop for thousands of shimmering stars.

"For almost five billion years the earth has known night and day," the Arkansas Natural Sky Association says on its website, https://darkskyarkansas.org. "The biology of nearly every living thing has evolved in this cycle making it nature's clock guiding sleeping, feeding, breeding, migration and more. As a result, turning night into day has biological consequences for insects, animals and humans."

There's an argument that more lighting means less crime, but according to the International Dark-Sky Association, that isn't necessarily true.

"Glare from bright, unshielded lights actually decreases safety because it shines into our eyes and constricts our pupils," according to https://bit.ly/3T4zzZr.

"Illumination engineers tell us that contrary to popular belief, overly bright light reduces visibility and safety and that motion sensor, not always on lighting, is optimal for security in most situations," McMath said.

Mortvedt said complying with the local electric utility, Entergy Arkansas, was a bit of a hurdle for Gilbert in its effort to switch to LED streetlights.

Gilbert paid for the new lights and installation.

"But we had to give the lights to Entergy," he said. "But they stuck with us through the whole thing. It took five years also, but they could have said no and not opened the door again."

"Entergy has a finite suite of lights they offer and none of them are really suitable from an environmental standpoint," McMath said. "Too blue and too bright."

The lumens -- or units of luminous flux -- need to be cut considerably when substituting LED lights, he said.

"They end up providing over-lighting and too much blue," McMath said.

In the case of Gilbert, 100-watt and 150-watt heirloom streetlights were replaced with 28-watt LED lights, and there was more light landing on the road afterward, he said.

Part of the reason is because of better technology.

McMath said the group was at "loggerheads" with Entergy until state Sen. Missy Irvin, R-Mountain View, was asked to help.

"They had their red lines that they weren't willing to cross, and Missy helped them find a way," McMath said. "Missy is the one that did whatever arm-twisting was required for us to find a solution."

"I'm thrilled," Irvin said. "I think this is the coolest project. I think this project will lend itself to a lot of people finding their way to Gilbert."

That could happen on April 8, 2024, when a solar eclipse occurs and the moon's shadow will plunge much of Arkansas into the path of totality.

Irvin said she remembered when a tornado knocked the power out for two weeks in 2008.

"I'm telling you the sky was just amazing," she said. "People that love the country love dark skies. They love looking at God's beautiful starry night."

Irvin helped Gilbert get an $11,600 grant from the Buffalo River Conservation Committee, which made the purchase of the lights possible.

"For me, I appreciate being able to be their spokesperson and an advocate for a community," she said. "And that's my job, my primary No. 1 job."

But the initiative was all Gilbert's.

"I love how they recognized this as one of their unique attributes," Irvin said. "They capitalized on it. They're not trying to be somebody that they're not. They're trying to maximize the resource that they have, as beautiful and unique as it is.

"Everybody is looking down at their phones, and we've got to start looking up. We have to realize how minute we are in the grand scheme of things. Maybe that will remind us of our humanity and where we we come from and our place. We need to be put in our place sometimes. It helps ground you."

"We worked with the city of Gilbert to develop a rate for municipalities that have received grant funding to support the National Park Service's dark-skies initiative within the boundaries of the Buffalo National River," said Brandi Hinkle, a spokesperson for Entergy Arkansas. "We are pleased that we were able to work with the city to address this issue, and Sen. Irvin was helpful in those discussions."

Gilbert doesn't have an official dark-sky designation like the Buffalo National River does, at least not yet, and neither does any other town in Arkansas.

"There are two possible roles for Gilbert and other area communities," McMath said. "In theory, it could become a dark-sky community, but that would require a lighting ordinance. It might also require additional controls on the street lighting. The other is it could participate in developing a dark-sky reserve around the Buffalo National River. This is where communities and other landowners enter into a plan to promote responsible lighting practices in order to protect the core dark-sky park, in this instance, the Buffalo National River. The latter would be particularly valuable here because the river is very narrow and hence is vulnerable."

Although LED lights use less energy, Mortvedt said residents of Gilbert won't really save any money on their electric bills with the new streetlights. He said Entergy still owns the light poles, and the ratepayers of Gilbert have to pay a tariff for unknown maintenance that might be needed in the future.

But the sky is darker in Gilbert, and Mortvedt said that's a good thing.

Mortvedt was just 5 years old then. He was in Gilbert to visit his great-grandparents, who moved there from Kansas City, Kan., in 1948. Twenty years later, his grandparents also moved to Gilbert. And Mortvedt moved there in 1981.

Mortvedt said his grandmother was elected mayor of Gilbert in 1973, the first female mayor in Searcy County.

He said there was opposition to street lighting in Gilbert even then.

One couple liked to stroll the streets of Gilbert in the nude at night.

But not after they installed the barnyard lights.

Arkansas' first Dark-Sky Festival will be held Oct. 21-22 at Tyler Bend Campground on the Buffalo National River. Information is available at https://darkskyarkansas.org/dark-sky-festival.