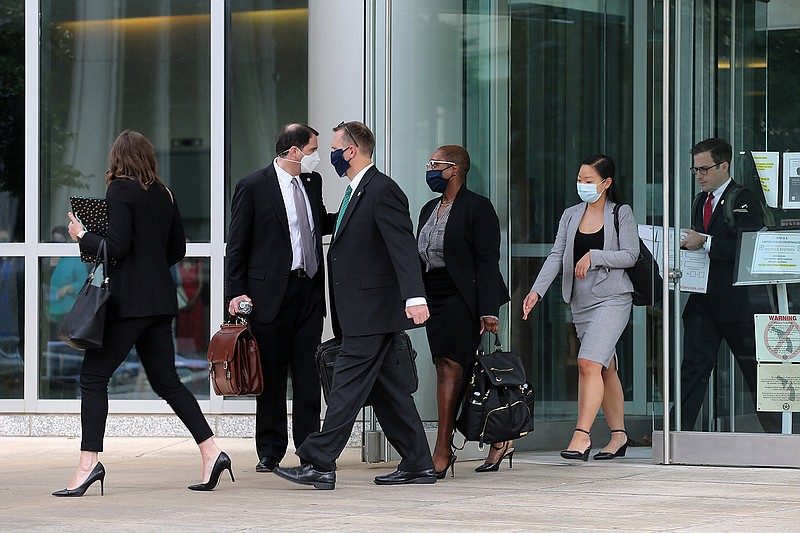 A second day of testimony concluded Tuesday in a federal trial to decide the constitutionality of the state's first-in-the nation ban on health care for teens suffering from gender dysphoria with powerful and emotional testimony from the fathers of two of the teens at the center of the legal struggle between four families and the state of Arkansas.

Donnie Saxton of Vilonia, father of 17-year-old Parker Saxton, testified to the change in his son since Parker began gender affirmation therapy, going from depressed and withdrawn to an enthusiastic teenager brimming with confidence.

Saxton spoke in glowing terms about the change in his son under questioning by Beth Echols, a Little Rock attorney working on the lawsuit.

"He's a new person," Saxton said. " A complete turnaround of the broken, anxious, depressed shell that he was before testosterone. It's amazing. Truly amazing."

"Does he have more confidence than he did before?" Echols asked.

"He's got huge confidence," Saxton said, with a laugh, "almost too much at times but that's good. He's kind of like his old dad so that's good."

Aaron Jennen of Fayetteville said his daughter, 17-year-old Sabrina, was also much more confident and although still prone to bouts of depression, had experienced a significant turnaround in her demeanor after beginning hormone therapy.

Stopping treatment, Jennen said, is not under consideration.

"I promise you that will not happen," he said.

Asked what might happen to Parker if gender affirming care should be withdrawn, Saxton's face grew dark with emotion.

ACLU lawyers said they expect to call their final witnesses on Wednesday at which time the state will begin presenting its case.

As the trial on the state's transgender health ban entered its second day, a child development psychiatrist testified Tuesday morning on international guidelines that recommend chest surgeries for only a small percentage of transgender boys.

Regarding chest surgery for young adolescent transgender boys as young as 13 or 14, Dr. Jack Turban, a child development psychiatrist with the University of California at San Francisco, said he would need more information regarding what patients the state's attorney, Michael Cantrell, was referring to when the question was asked.

"Surgery is a major decision," he said. "The risk of complications is very high."

Under questioning by ACLU attorney Chase Strangio, Turban said no randomized studies of the long-term effects of transgender care exist because the characteristics of randomized control trials cannot mask the physical changes between those receiving gender affirming hormone treatment and those receiving placebos. Turban also said few parents are willing to place their children into such trials.

"Parents are reluctant to put their children into randomized control trials because in the placebo group," Turban said, "we would expect their mental health to get worse."

He said that, by and large, studies on the long-term effects of transgender care for adolescents have indicated that mental health outcomes for adolescents suffering from gender dysphoria are improved over adolescents with gender dysphoria who did not receive gender-affirming treatment. Regarding the use of puberty blockers in pre-pubescent patients, he said there is no data to suggest that those patients suffered mental health declines as the result of the therapy.