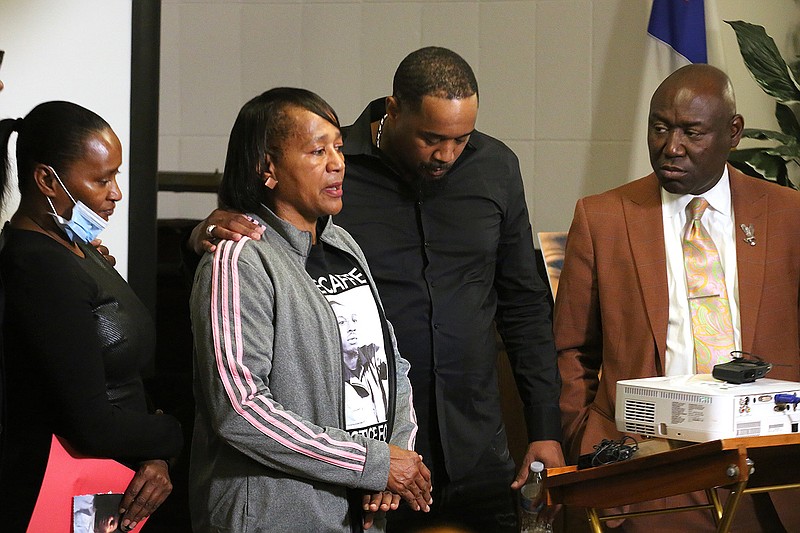 Nigel Caffey puts his arm around his mother, Rena, as she talks about her grandson, Terence Caffey, as Terence Caffey’s mother, Cheryl, and attorney Ben Crump look on Wednesday at Allison Memorial Presbyterian Church in Little Rock. (Arkansas Democrat-Gazette/Thomas Metthe)

The family of a man who died during a Dec. 10 arrest has asked the U.S. Department of Justice to review the actions of police from several agencies who were involved, alleging that the officers' treatment of the man was driven by racial prejudice, their lawyers said in a news conference Wednesday.

Family members of Terence Caffey were joined by attorneys, including Ben Crump and Marion Humphrey Jr., at Allison Memorial Presbyterian Church in Little Rock to announce their request, in a letter to the department's Civil Rights Division, and share footage of the fatal arrest.

Caffey, 30, of Little Rock, died during the arrest by Pulaski County deputies and officers from Little Rock police and the Arkansas State Police at the Movie Tavern at 11300 Bass Pro Parkway in Little Rock.

In a letter to Pulaski County Sheriff Eric Higgins on Sept. 16, Pulaski County Prosecuting Attorney Larry Jegley said none of the officers involved were at fault in Caffey's death.

He said the little-understood complication would not have been clear to officers or first responders on the scene.

The death was ruled a homicide, although the coroner noted that this does not imply criminal wrongdoing, Jegley said in the letter.

Asked if the legal team agreed with the cause of death determined by the coroner, Ken Abbarno, one of the family's lawyers, said they all agreed that it was a homicide and that the struggle with police contributed to the sickle cell disease complication.

"We came here for y'all to see that this was just flat-out murder," Nigel Caffey, Terence Caffey's uncle, said. "No other way to put it."

Crump, who has been an advocate for the Caffey family, rose to prominence representing the families of George Floyd, Michael Brown, Alesia Thomas and other Black people killed by police or who died in police custody as well as Trayvon Martin, who was shot and killed in 2012 by George Zimmerman, who was acting as neighborhood watch.

Posters at the news conference showed Caffey's face and referred to him as "Little Rock's George Floyd."

Caffey, who is Black, complained, like Floyd, that he couldn't breathe while officers were restraining him, something that Crump said connected the two cases.

"Why won't the police believe Black people when we say 'I can't breathe'?" Crump asked.

Officers in video footage released by the Pulaski County sheriff's office can be heard telling Caffey, who says he can't breathe and that he is dead, that he is fine and that he's not dead. They tell him that if he can talk he can breathe.

These statements were heckling Caffey, Crump said. He dismissed the idea that if someone can talk they can breathe.

"Every doctor will tell you that's not accurate," Crump said. "That is not evidence that everything is fine."

Unlike in the Floyd killing, officers never appear to kneel on Caffey's neck, although they do kneel on his legs and shoulders and place hands on his back and the back of his neck.

The officers mistreated Caffey, Crump said, when they had a duty to keep him safe while in their custody, and he thinks they committed firable offenses.

"Would they treat a dog like this?" Crump asked.

Crump said it was shameful that the case was not brought before a grand jury, which he thinks would have recommended charges for the officers involved based on the video footage.

"Doesn't it at least warrant consideration of a grand jury?" Crump said.

Also Wednesday, the lawyers showed a roughly two-minute clip of snippets of the arrest, which Crump and Nigel Caffey said included footage that was never released by the sheriff's office. All the footage shown Wednesday came from theater security cameras or police body cameras.

The sheriff's office on Sept. 23 released a roughly 43-minute video that compiled security and body camera footage to show the "critical" moments during the arrest. They also included raw footage from the security cameras and officers' body and vehicle cameras.

The only clip included in the video shown by lawyers Wednesday which was not apparently included in the 43-minute compilation was a roughly 15-second-long clip in which a Little Rock officer can be seen grabbing the back of Caffey's neck while police are restraining him on the ground outside the theater.

Abbarno referred to this as an officer clamping on Caffey's neck.

However, the raw video files released by the sheriff's office do include the clip, which came from the officer's body camera footage.

The legal team criticized the sheriff's office for releasing the video footage on a Friday afternoon, when news media and others would be less likely to publicize it. Crump called the move "another slap in the face."

"Nobody knew it was released to the news," Nigel Caffey said.

The sheriff's office emailed the hours' worth of video files to news media around 3:15 p.m. that Friday. Jegley's letter was released at 5 p.m. Friday the week before.

Crump conceded that the footage may have been previously released, but he said the video released by authorities did not properly focus on key moments.

One of these moments is when officers lift Caffey from the concrete outside the theater to place him in the back of a Pulaski County deputy's patrol vehicle. His body, especially his head and legs, appear limp at that time.

"Our medical examiner believes he's dead at that point," Crump said, although he did not say who his legal team consulted.

After placing Caffey in the back of the vehicle, the officers stand around and chat for several minutes, ignoring him, Crump said.

Earlier, the officers told first responders arriving on the scene to check on the theater employees and that Caffey did not need immediate care, body camera footage shows.

Authorities have said that Caffey did not stop breathing until after he was placed in the back of the patrol vehicle, and that attempts to resuscitate him after that were unsuccessful.

One clip, included in the sheriff's office's 43-minute compilation, that the legal team did not play at the news conference shows officers placing Caffey handcuffed in the back seat. He appears dazed and there is some slight head and jaw movement visible.

The video clip then ends, and authorities say the rest of the footage from the vehicle's camera was lost despite efforts by the manufacturer to recover it at the sheriff's request. Caffey is not seen on video again until 13 minutes after he was placed in the back seat, when an officer checks on him and finds he is not breathing.

The family was supposed to meet with Jegley on Sept. 16, the same day the letter clearing the officers was published, Abbarno said. Instead, a deputy prosecutor met with them, and the family got the impression the decision was already made.

"Only thing we got out of that was free water," Nigel Caffey said. "[He] buttered us up just to let us down."

The legal team will continue to pursue the case in civil court, Abbarno said, although it was not clear Wednesday what, if anything, would be filed in court.

Caffey's family has suffered immense grief from his death and the investigation that followed, his grandmother Rena Caffey said. Although she has forgiven the men she thinks killed him, she said she still prays for justice.

"We truly are missing Terence," Rena Caffey said. "Our heart's been broken and we're trying to put the pieces together." 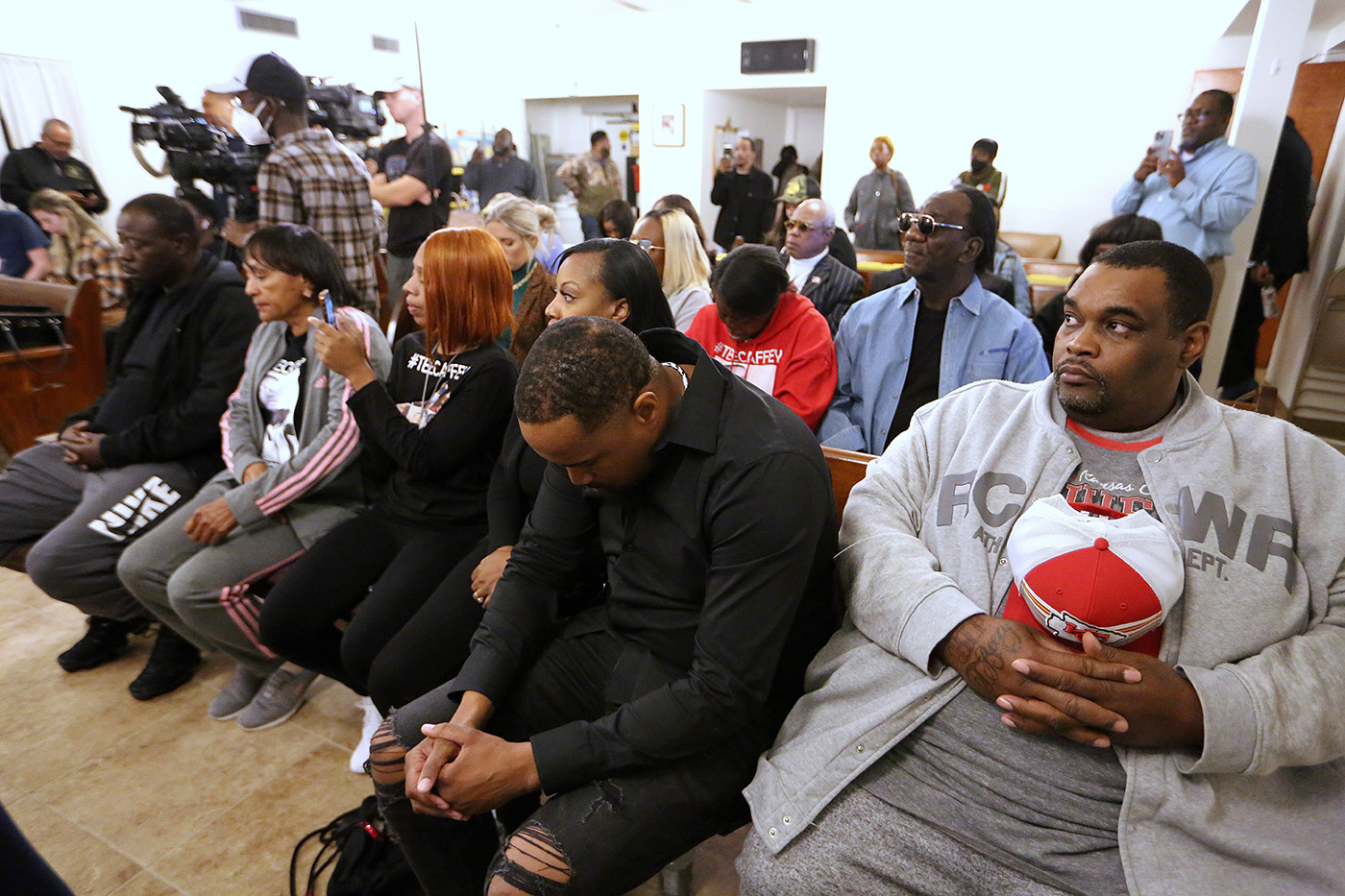 Nigel Caffey (right, center) puts his head down while sitting with family members after watching body camera and surveillance footage of the Dec. 10, 2021, death of his nephew, Terence Caffey, on Wednesday at Allison Memorial Presbyterian Church in Little Rock. (Arkansas Democrat-Gazette/Thomas Metthe)