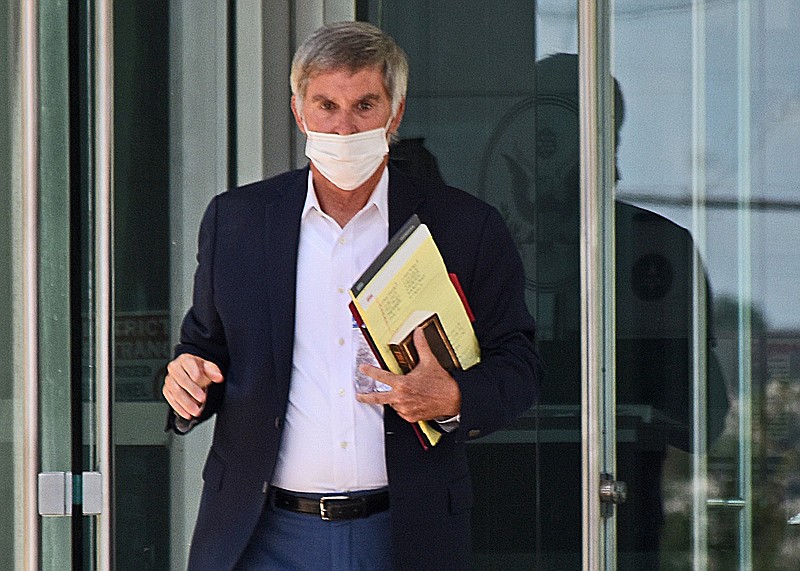 Baker, 66, of Conway, was indicted in 2019 on one count each of conspiracy to commit bribery, bribery concerning programs receiving federal funds, and seven counts of honest services wire fraud.

On Aug. 12, 2021, after nearly three weeks of testimony and four days of deliberations, the jury of eight women and four men acquitted Baker of bribery conspiracy but deadlocked on the remaining counts, prompting Chief U.S. District Judge D. Price Marshall Jr. to declare a mistrial in the matter. Two weeks later, the U.S. attorney's office filed a notice of intent to retry the case.

The case, expected to take about two weeks to retry, was scheduled to begin Nov. 8.

Reached by phone Thursday night, Baker's attorney, Blake Hendrix, said his legal team had been preparing for trial right up until the moment they were made aware the dismissal motion had been filed. Beyond that, he declined to comment.

"Unless and until Judge Marshall issues an order dismissing the indictment it would not be appropriate for me to comment on the matter," Hendrix said.

The motion to dismiss the indictment read: "The United States of America, by and through its attorney, Michael Gordon, Attorney for the United States Acting Under Authority Conferred by 28 U.S.C. § 515, for the Eastern District of Arkansas, and Assistant United States Attorney Julie Peters, moves the Court to dismiss with prejudice the Indictment in this case."

Baker, also a former political fundraiser and past chairman of the state Republican Party, was accused of acting as a middleman to bribe former Faulkner County Circuit Judge Mike Maggio to reduce a $5.2 million jury award against Greenbrier Nursing and Rehabilitation Center in 2013 in a lawsuit filed by the family of Martha Bull. Bull died two weeks after being admitted for a one-month rehabilitation stint at the center, which is owned by Michael Morton of Fort Smith.

Maggio pleaded guilty to bribery in 2015 and was sentenced to 10 years in prison. The former judge testified in Baker's trial last year and was released early from federal prison after serving about half of his sentence.

Morton has not been charged with any crimes and has denied any wrongdoing in the matter.

At the time of the Bull lawsuit, Baker worked as a lobbyist and fundraiser for the University of Central Arkansas in Conway in addition to his outside fundraising and lobbying activities on behalf of conservative candidates and causes.

During the trial, jurors heard from Morton, Maggio, associates and former associates of Baker, Arkansas Supreme Court Justice Rhonda Wood, former U.S. Attorney Cody Hiland, and the attorney who set up eight political action committees for Baker that were among 10 PACs that received donations from Morton that were intended for Maggio.

On Oct. 12, Hendrix filed a motion to dismiss the bribery count against Baker. On Oct. 14, Marshall granted a motion by the U.S. attorney's office for additional instructions to the jury on circumstantial evidence. On Thursday, Marshall entered an order to allow Jordan Fowler, a paralegal with Baker's legal team, to bring a cellphone and a laptop computer into the courtroom for the trial.

Later in the day, the U.S. attorney's office filed the motion to dismiss with prejudice, meaning, if Marshall approves the order, the charges may not be filed again.