OPINION | REVIEW: ‘The Banshees of Inisherin’ is hilarious, dark and deep

Song of the dumped: Padraic (Colin Farrell) consults with the best friend he has left in Martin McDonagh’s bittersweet black comedy “The Banshees of Inisherin.”

Seeing "Written and directed by Martin McDonagh" attached to a movie instantly throws my expectations up in the air. I never know what lies ahead. I really liked his 2008 feature film debut "In Bruges." I was lukewarm on his 2012 follow-up "Seven Psychopaths." I thoroughly disliked his third film, "Three Billboards Outside Ebbing, Missouri." So what about his fourth film, "The Banshees of Inisherin"?

Simply put, "Banshees" is pretty great and my favorite McDonagh film to date. It's his most intimate, most soulful and most mature movie, yet it still features many of the trademarks his fans (and critics) will look for. It's built on the back of one of the best screenplays of the year -- one that ushers us down a dark and twisted path, yet has us laughing every step of the way.

What a year it has been for Colin Farrell. First came his quiet meditative work in "After Yang." Then his scene-stealing turn in "The Batman." After that, he gave a wonderfully grounded performance in "Thirteen Days." (Editor's note: Farrell was also pretty terrific in the 2021 BBC miniseries "The North Water," which is now streaming on Amazon Prime.) Now he re-teams with McDonagh in "Banshees" and (in keeping with his sparkling 2022 trend) he's sublime. Joining him is his "In Bruges" co-star Brendan Gleeson, one of the most reliably great actors working today. Together they make a captivating duo in perfect sync with McDonagh's mordant sensibility.

"Banshees" is a movie that lives and breathes in the mundanity of life. It examines humanity through petty grievances. It pits the desire to be alone against the need for companionship. It asks the strangely fascinating question -- what's more important, being nice or being remembered? Why not be both? you ask. That's a question never posed on Inisherin, a small fictional isle sitting close enough to the Irish mainland to see and hear the sounds of civil war, yet sits far enough away to feel like a world all its own.

Set in 1923, McDonagh greets us with a stunner of an opener as his camera introduces us to Inisherin, with its lush green grass, jagged cliffs, long sandy beaches, endless stone fencing and handful of cozy rustic cottages. And of course there's the hub of all social activity -- the local pub, where everything can be celebrated, mourned, or hashed out over a pint of Guinness. Well, almost everything.

In this small, tight-knit, and delightfully eccentric community, Padraic Suilleabhain (Farrell) and Colm Doherty (Gleeson) have long been best friends. But something has changed, quite literally overnight. Colm comes to the conclusion that he no longer wants to be friends with Padraic.

"I just don't like ya no more," is the only explanation he gives.

But that's not enough for Padraic, an all-around nice guy who's perfectly content with his simple, unremarkable life on the island (so much so that he has earned the reputation of being a bit dull).

But the older Colm has found himself in an existential malaise. Convinced he hasn't much time left (12 years to be exact), Colm has dreams that reach beyond Inisherin -- not far beyond, but beyond nonetheless. He wants to do something people will remember, and sitting around listening to Padraic ramble on about donkey manure isn't helping him reach that goal. So he ends their friendship and trades his best friend for his fiddle.

But with the persistence of a pesky telemarketer, the earnest and genuinely perplexed Padraic keeps coming around, sure that his former friend will eventually snap out of his funk. Fed up, Colm does what any of us would do if we existed in a Martin McDonagh film. He warns that every time Padraic bothers him, he'll hack off one of his own fingers. You'd think that would be a deterrent, but (again) this is a Martin McDonagh film. So the story takes a darker turn, and what started as a simple spat soon spirals completely out of control.

Padraic tries to fill his best friend vacancy by hanging out with Dominic (a perfectly cast Barry Keoghan), the simple, girl-crazy village outcast. He has been tossed aside by the townsfolk, yet he may be the most honest of the bunch. Keoghan's line delivery and mannerisms are so precise they make Dominic one of the funniest, definitely the saddest, and in many ways the most tragic figure in the film.

Another key player is Padraic's loving yet long-suffering sister, Siobhan (a stellar Kerry Condon). She lives with her brother and his miniature donkey named Jenny, looking after him and taking up for him. Empowered by Condon's warmth and vigor, Siobhan's motherly bond with Padraic is both sweet and constraining. Opportunities for a richer life are calling her from the mainland. But how does she leave behind her dear brother and only sibling?

McDonagh treats us to many other quirky and colorful community members who'll show up from time to time. There's the busiest man in town, Jonjo the bartender (Pat Shortt). There's the gossipy shopkeeper, the cranky village priest, the creepy old crone who always pops up unexpectedly and whose presence teases a deeper meaning.

But it all comes back to Padraic, Colm, and the two Oscar-worthy performances behind them. Farrell with his perpetually furrowed brow, sad eyes, and whimsical charm. Gleeson with his world-wearied face, stoic gruffness, and melancholy gaze. They have a beguiling chemistry, and together they imbue this proudly Irish production with an acerbic wit and a firm gut punch that you'll be feeling for days after.

‘The Banshees of Inisherin’ 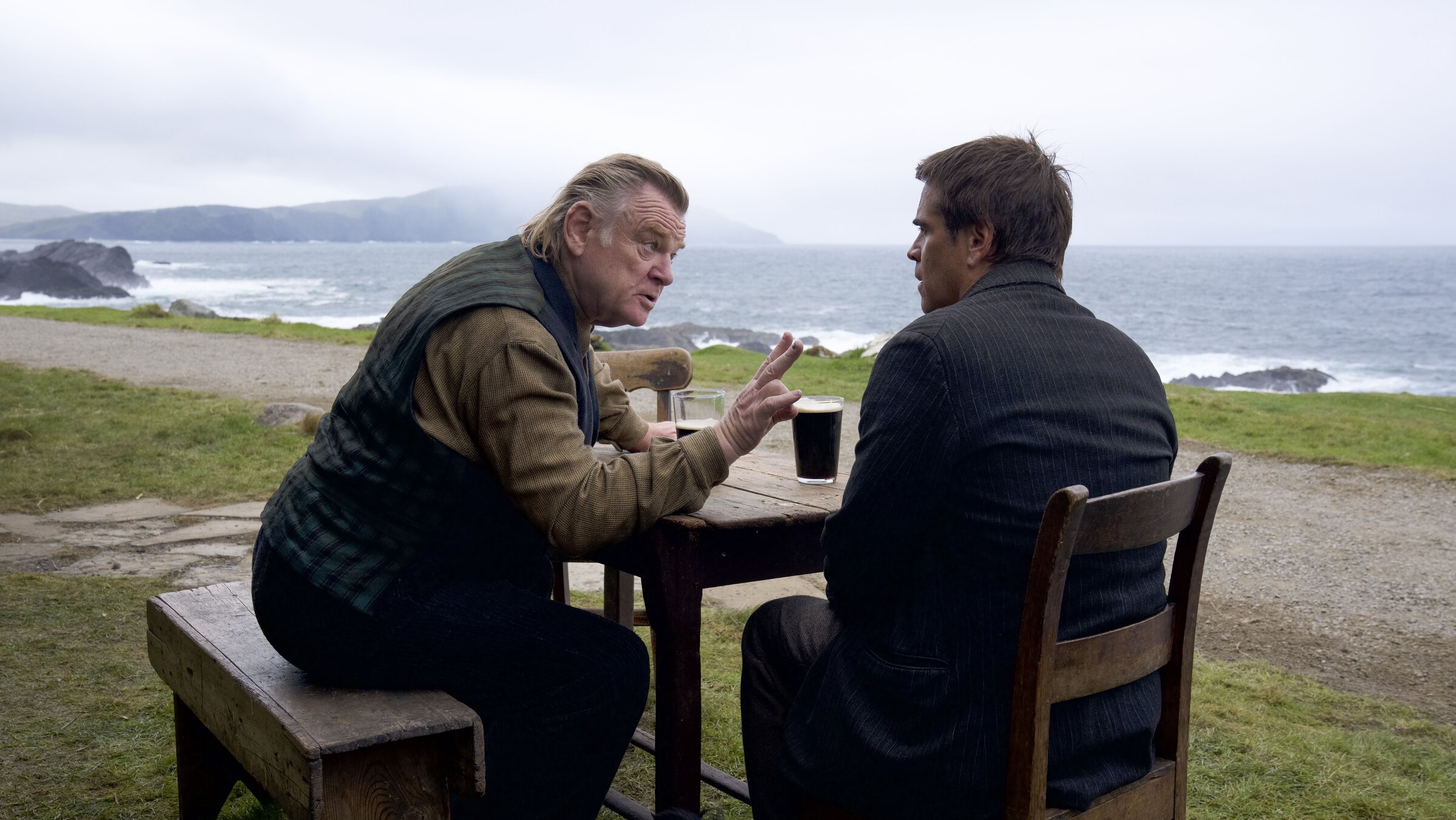 Traditional Irish musician Colm (Brendan Gleeson) believes his friendship with the feckless Padraic (Colin Farrell) might be costing him a shot at immortality in “The Banshees of Inisherin.”

Print Headline: Why can’t we be friends?