Injuries piling up for Red Wolves 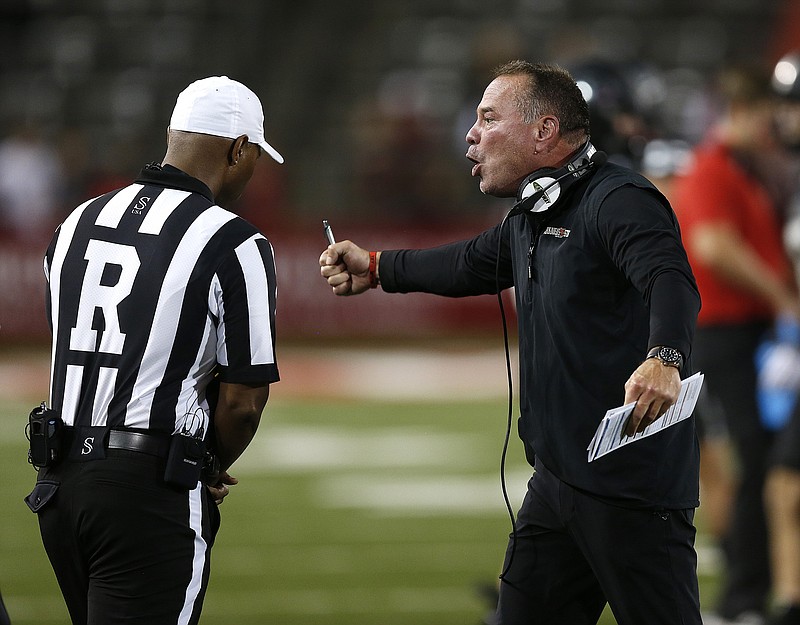 LAFAYETTE, La. -- Helmet on head and his right arm in a heavy black wrap, backup quarterback A.J. Mayer could only watch from the sideline as freshman third-stringer Jaxon Dailey finished out the fourth quarter Saturday night.

One player wasn't going to make a difference with Arkansas State down three touchdowns.

The Red Wolves knew, long before they arrived at Cajun Field, that they'd be shorthanded.

Running back Brian Snead, wide receiver Adam Jones and cornerback Samy Johnson didn't make the trip to Louisiana. James Blackman couldn't get through pregame warmups and was ruled out before kickoff. Then, Johnnie Lang took a hard hit on the opening kickoff and was done for the day shortly thereafter.

And that was only the start of it.

"I don't think anybody in the country has been through what we've been through when you look at the volume of injuries but also the quality of players that we're missing right now," Red Wolves Coach Butch Jones said. "They hurt because they feel they're letting the team down. They're great competitors but they just can't go."

ASU's two starting cornerbacks, Kenneth Harris and Leon Jones, both left the game in the second half. With Nos. 1-4 on the depth chart injured, the Red Wolves were forced to turn to Utah transfer Drew Rawls and two true freshmen, Ahmad Robinson and James Reed III

On top of that, linebacker Joe Britton, making his first ASU start, had to be helped off at one point, and left tackle Makilan Thomas -- who's been repeatedly seen around the Red Wolves' facility in recent weeks with a walking boot -- received his worst grade of the season by Pro Football Focus.

Not only did he struggle in pass protection, allowing a sack for the second time in three games, but Thomas and the ASU offensive front struggled to generate any push as the Red Wolves were held to 82 yards rushing on 21 carries.

Jones said postgame that ASU's current injury situation compares only to his 2016 season at Tennessee when the Volunteers had as many as 15 major injuries and went into the final game of the season down 11 starters.

Yet that Tennessee team still managed to finish 9-4 --the Vols won four of their last five following a three-game losing skid in the middle of its season -- because it had roster depth. It's something the Red Wolves have lacked, and Jones acknowledged that as far back as the summer.

"You can't use injuries as an excuse," Jones said. "The teams that win have the best bottom third of the roster and individuals have great opportunities now. They've been waiting for this opportunity to play."

ASU can argue, to an extent, that it had an unlucky draw from the outset. After next week, the Red Wolves will be one of just eight of 131 FBS teams will have not reached an open week -- their schedule pitted them against a daunting stretch of nine games in nine weeks, playing every Saturday through September and October.

Playing that many consecutive contests, perhaps injuries were bound to pile up. But even that can't fully explain ASU's dispiriting stretch of five losses in six weeks -- with three fourth-quarter collapses prior to a game Saturday when the Red Wolves showed little resistance defensively and no signs of climbing back into things offensively.

Jones described ASU's defeat in Lafayette as "a team loss."

If the Red Wolves are going to do anything to somewhat salvage their season over the final month, it's going to require the entire roster.

"Once the depth chart started rolling out, [young guys were] like, 'Oh, I'm not going to play,'" safety Justin Parks said. "I told every guy... they were going to play at some point in the season and you've got to be ready."