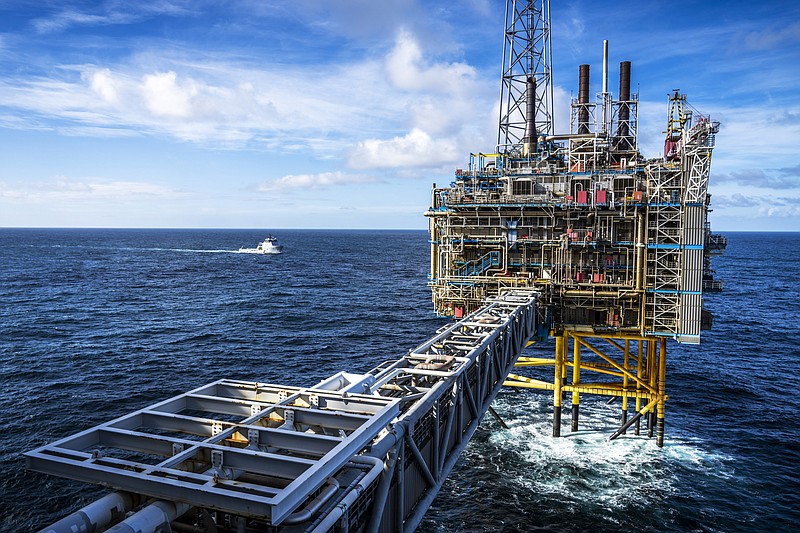 FILE - The Sleipner A gas platform, Norway, Oct. 1, 2022 as a Coast Guard ship patrols around the platform. Norwegian oil and gas workers normally don’t see anything more threatening than North Sea waves crashing against the steel legs of their offshore platforms. But lately they have noticed a more troubling sight: unidentified drones buzzing in the skies overhead. (Ole Berg-Rusten/NTB Scanpix via AP, File)

The Norwegian government has sent warships, coastguard vessels and fighter jets to patrol around the offshore facilities. Norway's national guard stationed soldiers around onshore refineries that also were buzzed by drones.

Prime Minister Jonas Gahr Store has invited the navies of NATO allies Britain, France and Germany to help address what could be more than a Norwegian problem.

Precious little of the offshore oil that provides vast income for Norway is used by the country's 5.4 million inhabitants. Instead, it powers much of Europe. Natural gas is another commodity of continental significance.

"The value of Norwegian gas to Europe has never been higher," Stale Ulriksen, a researcher at the Royal Norwegian Naval Academy, said. "As a strategic target for sabotage, Norwegian gas pipelines are probably the highest value target in Europe."

Closures of airports, and evacuations of an oil refinery and a gas terminal earlier this month due to drone sightings, caused huge disruptions. But with winter approaching in Europe, there is worry the drones may portend a bigger threat to the 5,600 miles of gas pipelines that spider from Norway's sea platforms to terminals in Britain and mainland Europe.

Since the start of the war in Ukraine in late February, European Union countries have scrambled to replace their Russian gas imports with shipments from Norway. The suspected sabotage of the Nord Stream 1 and 2 pipelines in the Baltic Sea last month happened a day before Norway opened a new Baltic pipeline to Poland.

Amund Revheim, who heads the North Sea and environment group for Norway's South West Police force, said his team interviewed more than 70 offshore workers who have spotted drones near their facilities.

"The working thesis is that they are controlled from vessels or submarines nearby," Revheim said.

Winged drones have a longer range, but investigators considered credible a sighting of a helicopter-style bladed model near the Sleipner platform, located in a North Sea gas field 150 miles from the coast.

Norwegian police have worked closely with military investigators who are analyzing marine traffic. Some platform operators have reported seeing Russian-flagged research vessels in close vicinity. Revheim said no pattern has been established from legal marine traffic and he is concerned about causing unnecessary, disruptive worry for workers.

But Ulriksen, of the naval academy, said the distinction between Russian civilian and military ships is narrow and the reported research vessels could fairly be described as "spy ships."

The arrest of at least seven Russian nationals caught either carrying or illegally flying drones over Norwegian territory has raised tensions. On Wednesday, the same day a drone sighting grounded planes in Bergen, Norway's second-biggest city, the Norwegian Police Security Service took over the case from local officers.

"We have taken over the investigation because it is our job to investigate espionage and enforce sanction rules against Russia," Martin Bernsen, an official with the service known by the Norwegian acronym PST, said. He said the "sabotage or possible mapping" of energy infrastructure was an ongoing concern.

Russia's Embassy in Oslo hit back Thursday, claiming that Norway was experiencing a form of "psychosis" causing "paranoia."