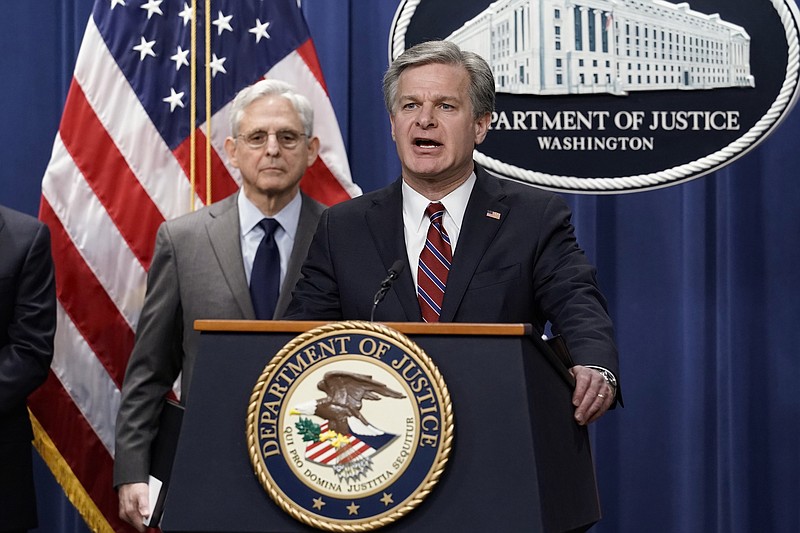 FBI Director Christopher Wray, joined at left by Attorney General Merrick Garland, speaks to reporters as they announce charges against two men suspected of being Chinese intelligence officers for attempting to obstruct a U.S. criminal investigation and prosecution of Chinese tech giant Huawei, at the Department of Justice in Washington, Monday, Oct. 23, 2022. (AP Photo/J. Scott Applewhite)

Two suspected Chinese intelligence officers have been charged with attempting to obstruct a U.S. criminal investigation of Chinese tech giant Huawei by bribing a federal official for inside information, the Justice Department said.

The defendants are accused of paying tens of thousands of dollars in digital currency, along with cash and jewelry, to a U.S. official they thought they had recruited as an asset. But the official was a double agent working for the FBI, the department said.

That prosecution, as well as two other cases involving Chinese operatives, was highlighted Monday at a news conference that featured the heads of the FBI and the Justice Department, a rare joint presence reflecting a concerted American show of force against Chinese intelligence efforts.

Besides the two men announced Monday, 11 other Chinese nationals have been charged with offenses in the past week, including harassment of people in the United States, that FBI Director Christopher Wray said show China's "economic assaults and their rights violations are part of the same problem."

The announcements came just days after Xi Jinping awarded himself a third term as leader of China's Communist Party, although Wray dismissed the idea of a possible connection in the timing, noting "we bring cases when they're ready."

"If the Chinese government, the Chinese Communist Party, continues to violate our laws, they're going to keep encountering the FBI," he said.

A spokesperson for the Chinese Embassy in Washington, Liu Pengyu, accused the U.S. of using "state power to unreasonably suppress non-U.S. companies."

"This goes against market principles and is a blatant act of bullying," Liu said in a statement. "China firmly opposes this. The Chinese government will continue to firmly safeguard the legitimate rights and interests of Chinese enterprises."

Chinese Foreign Ministry spokesperson Wang Wenbin did not discuss the specifics of the case involving Huawei Technologies Co. at a briefing Tuesday but said "we always oppose the U.S. overstretching the concept of national security and abusing state power to unwarrantedly suppress Chinese companies."

More generally, he said, the Chinese government always asks its citizens to follow the laws of the countries where they reside, but he also accused the U.S. government of making up lies to smear China.

In the Huawei case, Guochun He and Zheng Wang, are accused of trying to direct a U.S. official to supply confidential information about the Justice Department's investigation, including about witnesses, trial evidence and potential new charges.

The Justice Department separately announced charges against four other Chinese nationals, accusing them of using the cover of an academic institute to try to procure sensitive technology and equipment as well as interfering with protests that "would have been embarrassing to the Chinese government."

And it highlighted a case from last week in which two additional people were arrested and five others charged with harassing someone living in the U.S. to return to China as part of what Beijing calls Operation Fox Hunt.

"Today's cases make clear that Chinese agents will not hesitate to break the law and to violate international norms in the process," Deputy Attorney General Lisa Monaco said.

The case connected to the Huawei probe dates to January 2019. The company, a top executive and several subsidiaries had just been indicted on U.S. charges of financial fraud, trade secret theft and sanctions violations.

Wang and He, according to prosecutors, were eager for non-public information about the prosecution and the status of the investigation. They reached out to a contact they had known since 2017, but the person, who was not identified by name, began working as a double agent and engaged in a back-and-forth with the defendants that was overseen by the FBI.

Last year, prosecutors say, the person passed to the defendants a single-page document that appeared to be classified and that contained information about a purported Justice Department plan to charge and arrest Huawei executives who were living in China. The person said the document had been secretly photographed during a meeting with federal prosecutors.

The document was prepared specifically for the purposes of the prosecution that was unsealed Monday, and the information in it was neither accurate nor an accurate reflection of any Justice Department plans, officials said.

The company is not named in the charging documents, and prosecutors declined at Monday's news conference to name it, though the references make clear that it's Huawei.

Spokespeople for Huawei and the Chinese Embassy in Washington did not immediately return messages seeking comment. Huawei has previously called the federal investigation "political persecution, plain and simple."

"Attacking Huawei will not help the U.S. stay ahead of the competition," the company said in a statement published in 2020.

In the case linked to Operation Fox Hunt, prosecutors say Chinese agents tried to intimidate an unnamed person and his family to return to China. Part of the plot, U.S. officials allege, involved having the person's nephew travel to the U.S. as part of a tour group to deliver threats that included, "Coming back and turning yourself in is the only way out." 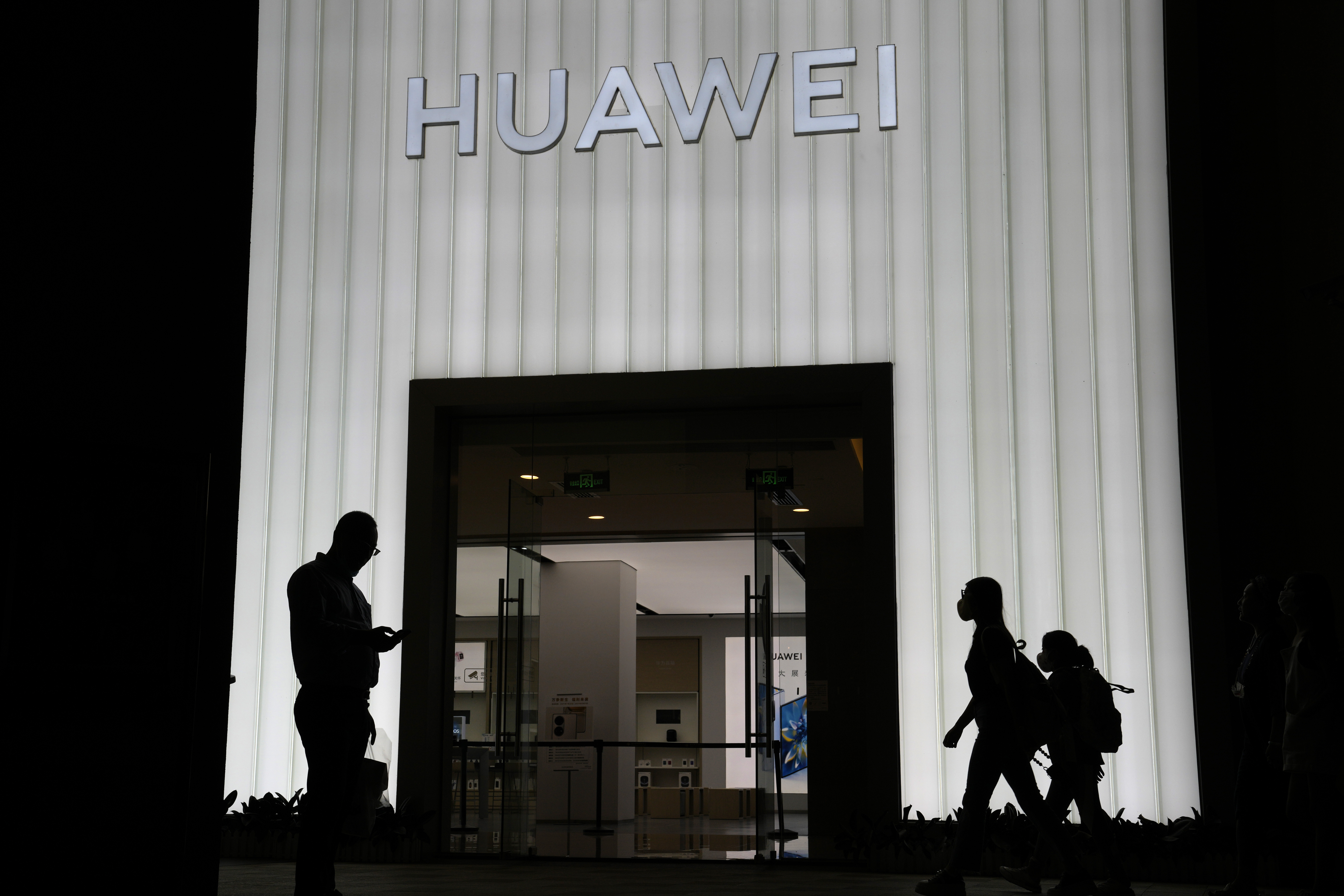 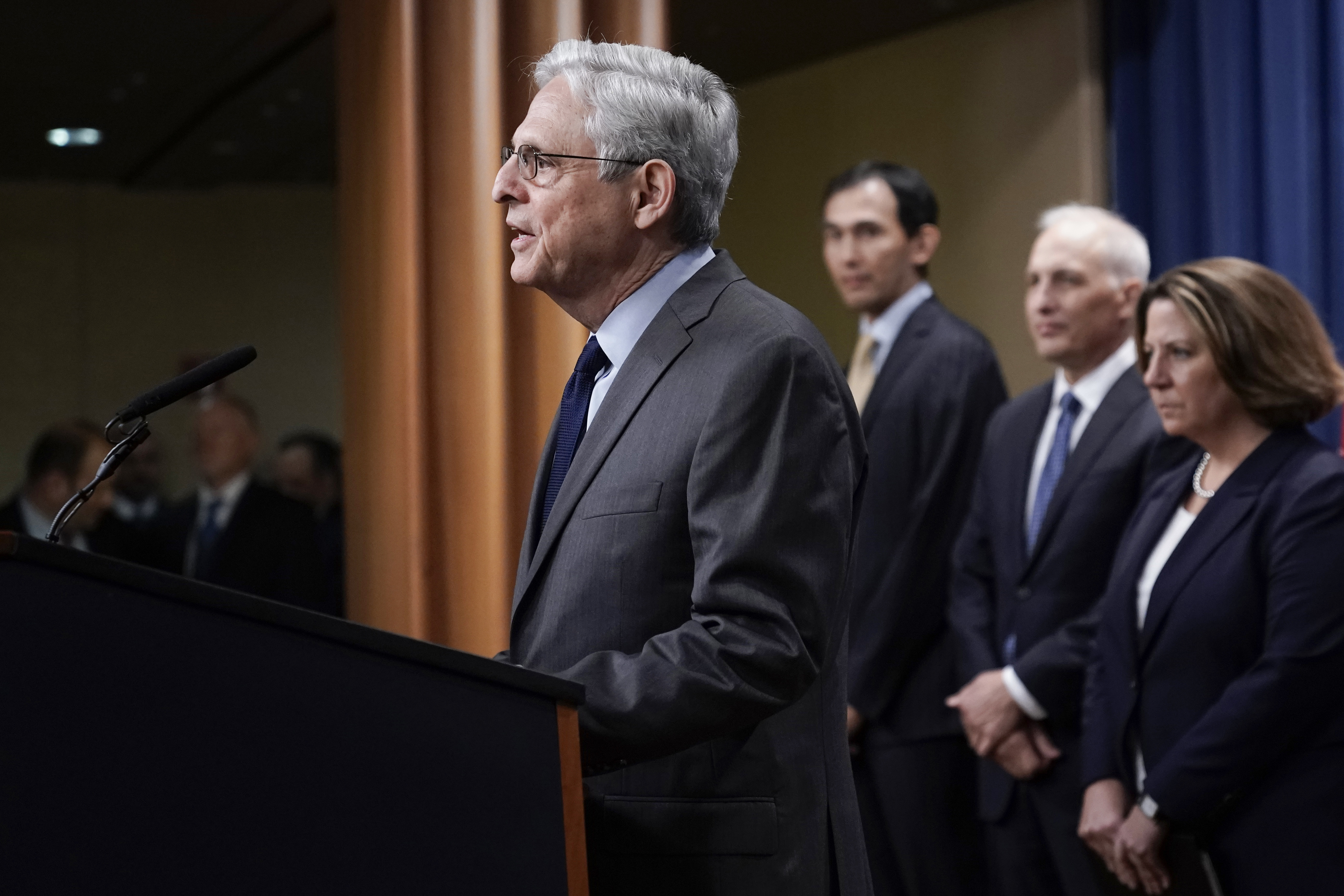 Attorney General Merrick Garland, joined by otters Justice officials, speaks to reporters as they announce charges against two men suspected of being Chinese intelligence officers for attempting to obstruct a U.S. criminal investigation and prosecution of Chinese tech giant Huawei, at the Department of Justice in Washington, Monday, Oct. 23, 2022. (AP Photo/J. Scott Applewhite) 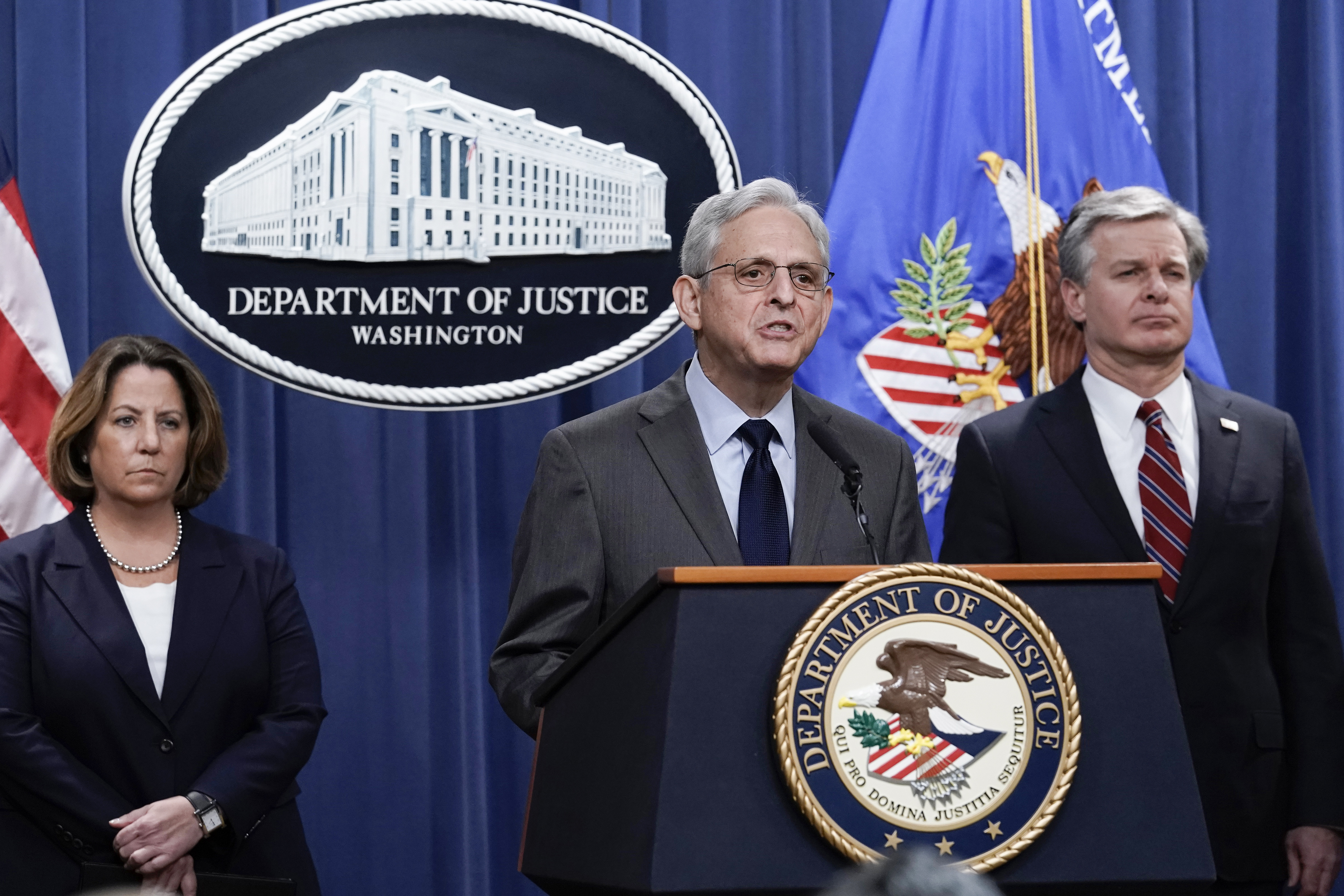 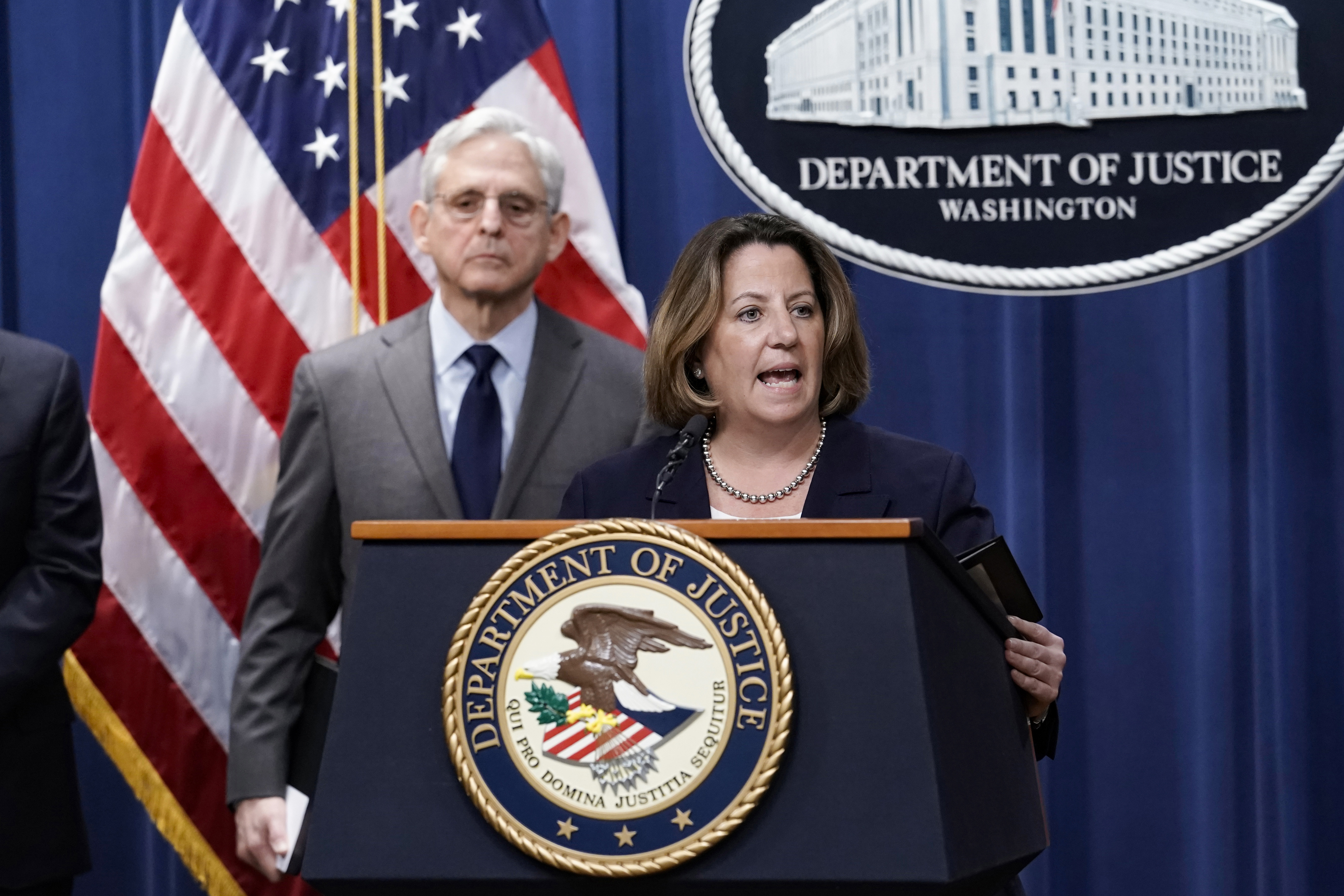