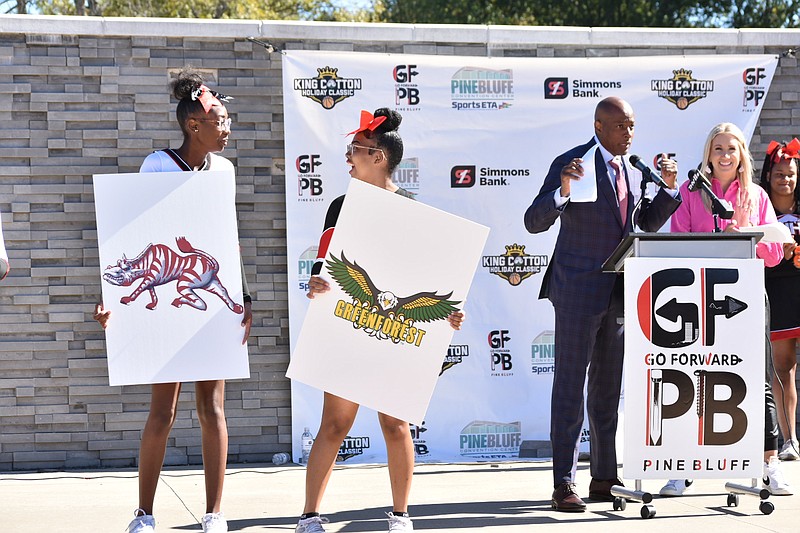 PINE BLUFF -- The King Cotton Holiday Classic has churned out some intriguing fields since it was revived in 2018, but this year's edition may be the best of the bunch.

A trio of powerhouses from Georgia and nationally-renowned programs from California and Washington, D.C., highlight the prestigious showcase, which will take place Dec. 27-29 at the Pine Bluff Convention Center.

"We began this journey in 2018 reviving tournament, and since then we skipped the covid-19 year [2020] but had two successful years where we electrified the Pine Bluff Convention Center," Go Forward Pine Bluff CEO Ryan Watley said Wednesday during the event's news conference at the Main Street Downtown Plaza. "Last year was a tournament that we had not seen in a long time, and we're looking to build upon it."

The star-studded participants that will be in Pine Bluff for this year's classic suggest that the tournament organizers are doing more than just building – they're on the fast-track to re-establishing the King Cotton as the nation's premier holiday event.

Jonesboro, which won the Class 5A state title last year and will be ranked among the top two teams in the state when the preseason rankings are released in November, highlight a quartet of competitors representing Arkansas. The Golden Hurricane, who are now in Class 6A, will have an ultra-stacked roster, headed by 6-8 forward and Elon commit Isaac Harrell and guard Deion Wesson.

"I always frontload my schedule to play the toughest teams that we can possibly play," said Mills Coach Raymond Cooper. "And it gets no better than this. It's an honor to come an play. This has historically been one of the best tournaments in the country.

"I remember years back when I went to watch Corliss Williamson play Jason Kidd in this tournament. It's been wonderful just to see the city rally around it, and it's a thrill for me."

Like last year, 16 boys' teams will compete during the three days, led by a McEachern (Ga.) team that features the No. 9 player in the Class of 2024 according to ESPN. Airius Bailey, a 6-9, five-star forward, has offers from schools such as Auburn, Kansas, Kentucky, Memphis and Tennessee. Newton (Ga.), which has three players – Connecticut commit Stephon Castle, Indiana commit Jakai Newton and Georgia State commit Qua Brown – ranked among ESPN's top 100 juniors, and Greenforest-McCalep Christian (Ga.), led by 7-0 center and Georgia State pledgee Dhiaukuei Dut, are also coming.

California will have a representative in the fold, St. John Bosco, as will the nation's capitol, with Sidwell Friends making the trip. The two went a combined 51-10 last season.

Beaumont United (Texas), with Washington commit Wesley Yates, is back after playing in the 2021 tournament. Elkins and Silsbee are two other teams from Texas while South Shore and Windermere are set to travel in from New York and Florida, respectively.

Bishop O'Connell (Va.) and Grissom (Ala.) round out the contenders.

"Last year was the first year that White Hall was ever a part of the King Cotton Classic," White Hall Coach Josh Hayes said. "It was a great experience for our players and me as a coach, and we're definitely elated to be invited back. We want to make this a yearly thing, and the talent has increased.

"I asked [Glover] how could he have gotten it better than last year. "But the talent is big time, and we're certainly happy to be a part of it."

TICKETS Can be purchased at KingCottonClassic.org