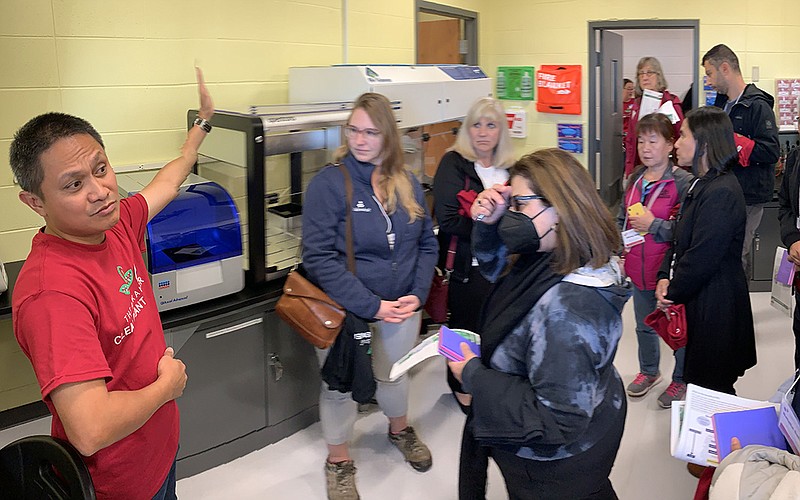 Research scientist Dan Villamor (left) speaks to visitors Wednesday during a tour of the Arkansas Clean Plant Center at the University of Arkansas Agricultural Experiment Station in Fayetteville. The facility will allow for rapid results for growers of nursery plants and berries checking that their crops are free of disease. (NWA Democrat-Gazette/Andy Shupe)

FAYETTEVILLE -- The new laboratory for the Arkansas Clean Plant Center for Berries at the Arkansas Agricultural Experiment Station will double the center's testing and cleaning capacity, as the center aims to assure that nurseries and growers have plants free from harmful pathogens.

With expanded capabilities, the center will be able to better serve producers in Arkansas and nationally, and it's "a great teaching tool for students," said Ken Korth, head of the Department of Entomology and Plant Pathology at the University of Arkansas, Fayetteville. Through the center's disease diagnostics, healthier plants are created, which ultimately "increases food production and food security."

The center provides testing and clean-up necessary for certification of nurseries providing berry planting stock and for export, according to Ioannis Tzanetakis, the center's director since its inception in 2011 and a professor of plant virology for the Arkansas Agricultural Experiment Station, the research arm of the University of Arkansas System Division of Agriculture. The goal is to "eliminate systemic pathogens of concern for berry crop plants."

A "clean plant" is one that's been tested for, and found free of, economically important and/or destructive plant viruses and virus-like organisms, and maintained under controlled conditions to prevent reinfection, according to the National Clean Plant Network, which is was created to protect U.S. specialty crops -- berries are one of seven specialty crops covered by the National Clean Plant Network -- from the spread of deleterious diseases. The plants "are then propagated in recognized certification programs."

The preponderance of foundation-level plant material produced by centers -- such as the Arkansas Clean Plant Center for Berries -- in the National Clean Plant Network is sold to nurseries, according to the National Clean Plant Network, an association of scientists, educators, state and federal regulators, nurseries and growers that work together to make sure plant propagation material is clean and available. Nurseries then increase it and sell it to end users.

Some berry plants "have a virus right away, and growers can tell pretty much immediately," said Aaron Cato, horticulture extension specialist in pest management for the University of Arkansas System Division of Agriculture. "It's big for a grower to get clean plants."

"The first time they get a clean plant, they never go back," said Amanda McWhirt, extension horticulture production specialist for the University of Arkansas System Division of Agriculture. It can cost roughly $20,000 to establish an acre of blackberry plants in Arkansas, so naturally growers are dismayed and disheartened if they see plants with viruses as soon as they're planted.

Though the Center works with all manner of berries, blackberries command outsized attention, Tzanetakis said. "Berries are a big deal here, but blackberries are the 800-pound gorilla in the room."

Blackberries are "special to the state, and" the University of Arkansas System Division of Agriculture Blackberry Breeding Program -- directed by John Clark -- "has been internationally known since the 1960s," said Margaret Worthington, associate professor of horticulture and fruit breeder for the Arkansas Agricultural Experiment Station.

New varieties of blackberries continue to be created, many credited to Clark's award-winning Blackberry Breeding Program -- for which Worthington is an assistant -- and "every continent except for Antarctica has Arkansas blackberries being grown."

The Center, which held a grand opening Wednesday, had been located on the UA-Fayetteville campus in the Plant Sciences Building, where it had to share space with the research lab of Tzanetakis, said Fred Miller, science editor, University of Arkansas System Division of Agriculture. The new space had been etymology labs, but that research waned in recent years, freeing up the location for the Center.

"At times, there were 14 of us in a 900-square-foot" space on campus, but the new facility is twice that size, Tzanetakis said. "The work we do here has to be up to a certain standard," which is easier to maintain with more room to maneuver.

"We were limited by capacity in the [previous] workspace, sharing equipment and machines," seconded Dan Villamor, a UA-Fayetteville research scientist who manages the Center. Now, "we can be more productive," which ultimately provides "value to the [berry] industry."

The U.S. ranks second worldwide in berry fruit production, according to FAOSTAT, a collection of databases covering international agricultural statistics for the Food and Agriculture Organization of the United Nations.

Procedures like this previously had to be sent to outside services for analysis, so moving them in-house will provide for rapid turnaround on results, according to Tzanetakis. The lab also cleans plant material for public breeding programs, a pathogen elimination service funded by the U.S. Department of Agriculture.

Samples from clients are placed in a "dirty room" in the new facility to avoid contaminating other samples, said Villamor, who is "most excited" about a robotic machine in the new Center that "can speed things up" and avoid human error. The robotic equipment can fill a tray of 384 samples much faster than a human can manually, while also eliminating the possibility of "mistakes" by a person.

The Center's new location, in the Crawley Warren Building at the Milo J. Shult Agricultural Research and Extension Center, is also beneficial because it's next to the Arkansas Plant Health Clinic, Korth said. That allows for "synergy between groups, [as] it's all about healthy plants."

The renovated building for the Center cost roughly $1 million, with a 550-square-foot greenhouse on the same site that's currently under construction and estimated at another $1 million, Tzanetakis said. "The industry has been very helpful," as have U.S. Department of Agriculture grants and funding.

The National Clean Plant Network is funded by the U.S. Department of Agriculture under three branches, the Animal and Plant Health Inspection Service, the Agricultural Research Service, and the National Institute of Food and Agriculture, according to Miller. The Arkansas Clean Plant Center for Berries is one of only four centers in the network devoted to berries, with the closest other berry center in Raleigh, N.C., and the others in California and Oregon.

Tzanetakis hopes to begin planting in the greenhouse in April, and it'll be "a closed system," he said. Plant viruses are transmitted "primarily by insects, who love well-fed plants, and these will be the best-fed plants," hence the need for a closed system to keep out those insects.

When a viral or bacterial pathogen is detected in plants, the Center's team uses heat or chemical treatments to slow the progress of infection, preventing it from reaching the meristematic tissue -- from which new plant tissue grows -- and that tissue can then be removed and cultured to grow new plants free of those pathogens, according to Tzanetakis. The Center's team has even discovered a pair of new viruses -- yet to be named -- that can plague berry crops. 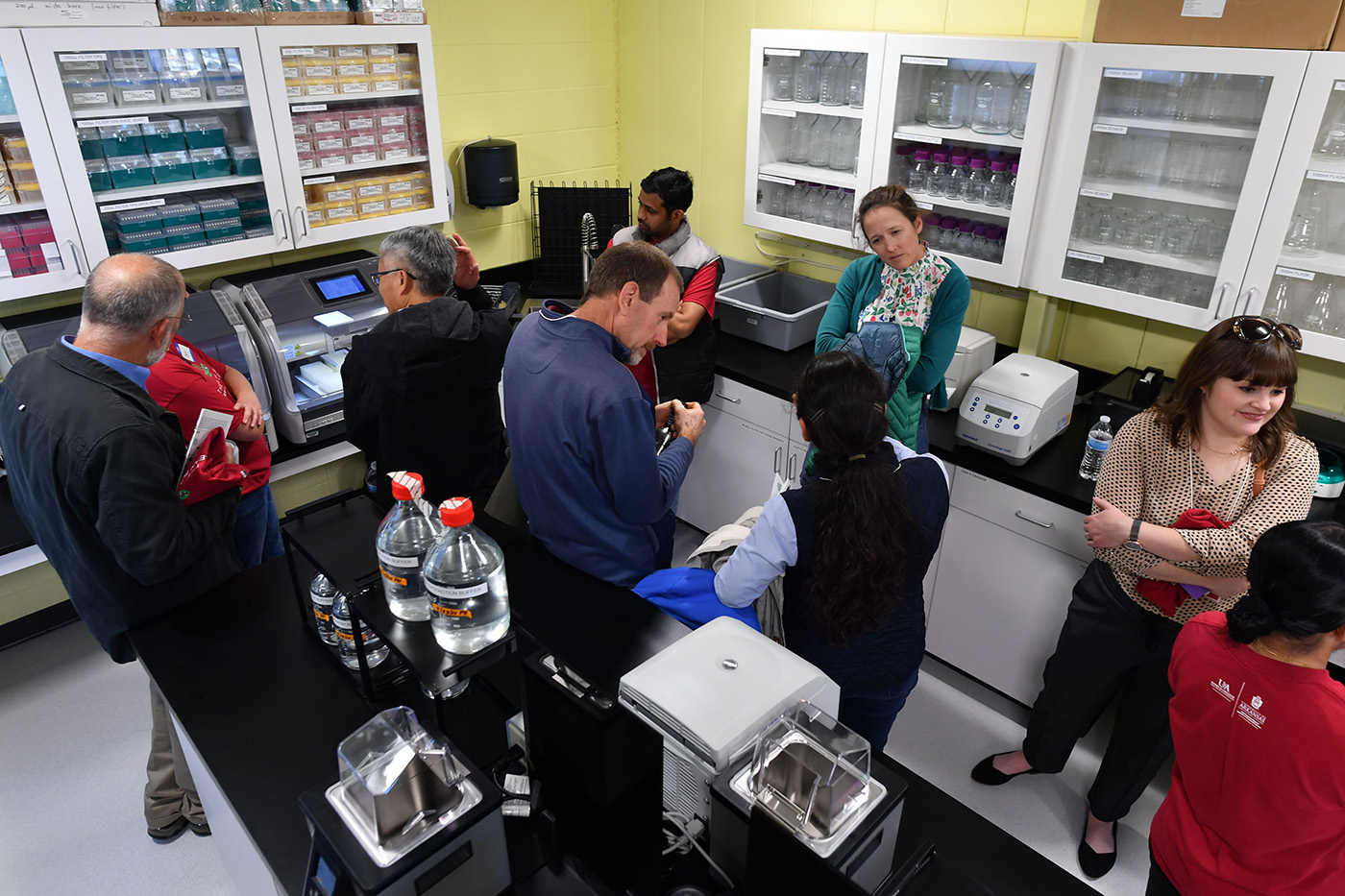