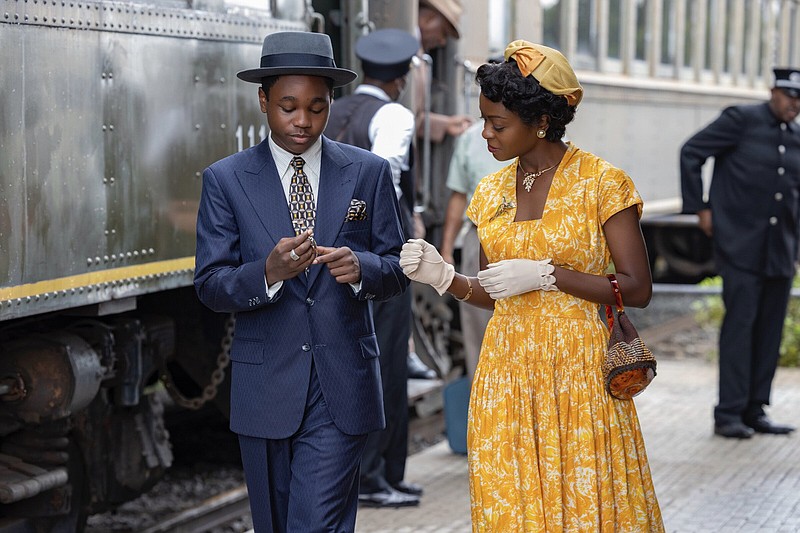 Dapper and urbane 14-year-old Emmett Till (Jalyn Hall) prepares to say goodbye to his mother Mamie Till-Mobley (Danielle Deadwyler) as he leaves Chicago for a vacation with his cousins in Mississippi in Chinonye Chukwu’s “Till.”

The story of Emmett Till is unsettling, unspeakable, and infuriating. Yet out of such a cold-hearted and hate-driven crime came another story -- one of unimaginable courage. And while the story of Emmett Till, his murder, and the travesty of justice that followed inescapably brings feelings of heartache and indignation, the story of his mother, Mamie Till-Mobley is one full of inspiration and power.

It was the summer of 1955. Emmett Louis Till was only 14 years old when he hopped on a train in Chicago bound for Mississippi. There he was to spend a couple of weeks visiting family. A few days into his visit, he and his cousins entered Bryant's Grocery and Meat Market to buy candy. While inside, Emmett, who was Black, had an encounter with Carolyn Bryant, the white co-owner of the store. What exactly took place in the store is still disputed, but what followed isn't. On Aug. 28, 1955, young Emmett Till was kidnapped, tortured and lynched.

Dramatizing stories like this in movie form is always tricky. But rather than honing in on the barbaric killing (and risk unintentionally exploiting it in the process), director Chinonye Chukwu puts her focus on Mamie Till-Mobley. Told mostly from Mamie's perspective, "Till" spares us the visual horror of Emmett's murder, but the pain of his death is felt in every single frame and in the emotionally raw and revelatory performance of Danielle Deadwyler, whose name should be on every awards season ballot. She invigorates the role of Mamie, who makes the agonizing journey from shattered mother to civil rights crusader.

"Till" features much of the same precision seen in Chukwu's 2019 debut film, the terrific yet woefully underseen "Clemency." This is a considerably bigger undertaking both in terms of size and scope. But Chukwu manages it well, showing off keen instincts both technically and narratively. The production design and costumes are top-notch, as is her control of the camera, from framing a shot to knowing when to keep it still. Most importantly, Chukwu and her co-writers Michael Reilly and Keith Beauchamp maintain a grounded and crushingly authentic approach to storytelling.

Emmett is played by Jalyn Hall, whose big smile and outgoing personality can light up a room. He's shown to be sweet, full of life and the apple of his mother's eye. When we first meet him, he's bubbling with excitement over visiting his cousins down South. But Mamie is uncomfortable with letting her son leave Chicago. She knows the dangers that may await a young boy of color in the Mississippi Delta, warning him, "Be small down there."

Yet despite her visible concern (aka mother's intuition), Mamie puts her beloved son on the train with his uncle known as Preacher (John Douglas Thompson). Little did she know, that was the last time she would see her son alive.

For Black people in the Jim Crow-era South, you could find yourself in a lot of trouble for simply looking at a white person the wrong way. As the well-meaning and naturally friendly Emmett enters Bryant's Grocery and Meat Market, Chukwu ensures we sense the weight of what's about to happen. And as Emmett has his ill-fated exchange with Carolyn Bryant (played by Haley Bennett), Chukwu turns up the tension. It's palpable, from the time he leaves the store until a few days later, when Carolyn's husband Roy (Sean Michael Weber) and his pack of goons kidnap Emmett in the dead of the night, savagely beating him beyond recognition, and then killing him. Chukwu's handling of these scenes are masterful -- showing you don't always have to submit your audience to brutality for them to feel its effects.

Back in Chicago, Mamie gets word of Emmett's kidnapping and is directed to Rayfield Mooty (Kevin Carroll) who uses his connections to get the NAACP involved. But then comes word of Emmett's fate, and Mamie is left devastated. Rayfield encourages her to speak out and utilize the public's attention, but Mamie has no interest. She just wants Emmett's body brought home. But then she sees his brutalized remains and makes a bold decision. Mamie has an open-casket public wake, determined that people actually see what happened to her son. This launches her campaign for justice which leads to a Mississippi court where her son's killers are put on trial. "There is no testimony like a mother's."

Obviously this is heavy material from start to finish, and filmmakers have often struggled to walk the line between authenticity and manipulation. But for a story that's all about grabbing people's attention and forcing them to open their eyes, it makes sense that "Till" essentially does that same thing to its audience. Thankfully it never hits a false note, and Deadwyler's performance is such a firm anchor.

Interestingly, "Till" does stumble on a few of the real-life details. Most are small, such as Emmett's stutter, which pops up in one lone scene then suddenly vanishes. Others are puzzling, like the sanitizing of Emmett's father and his troubling backstory. But they're hardly deal-breakers, especially in a movie that speaks with such honesty and clarity. Add to it some of the very best ensemble work of the year, impeccable '50s period design, and storytelling that's every bit as heart-wrenching as it needs to be. 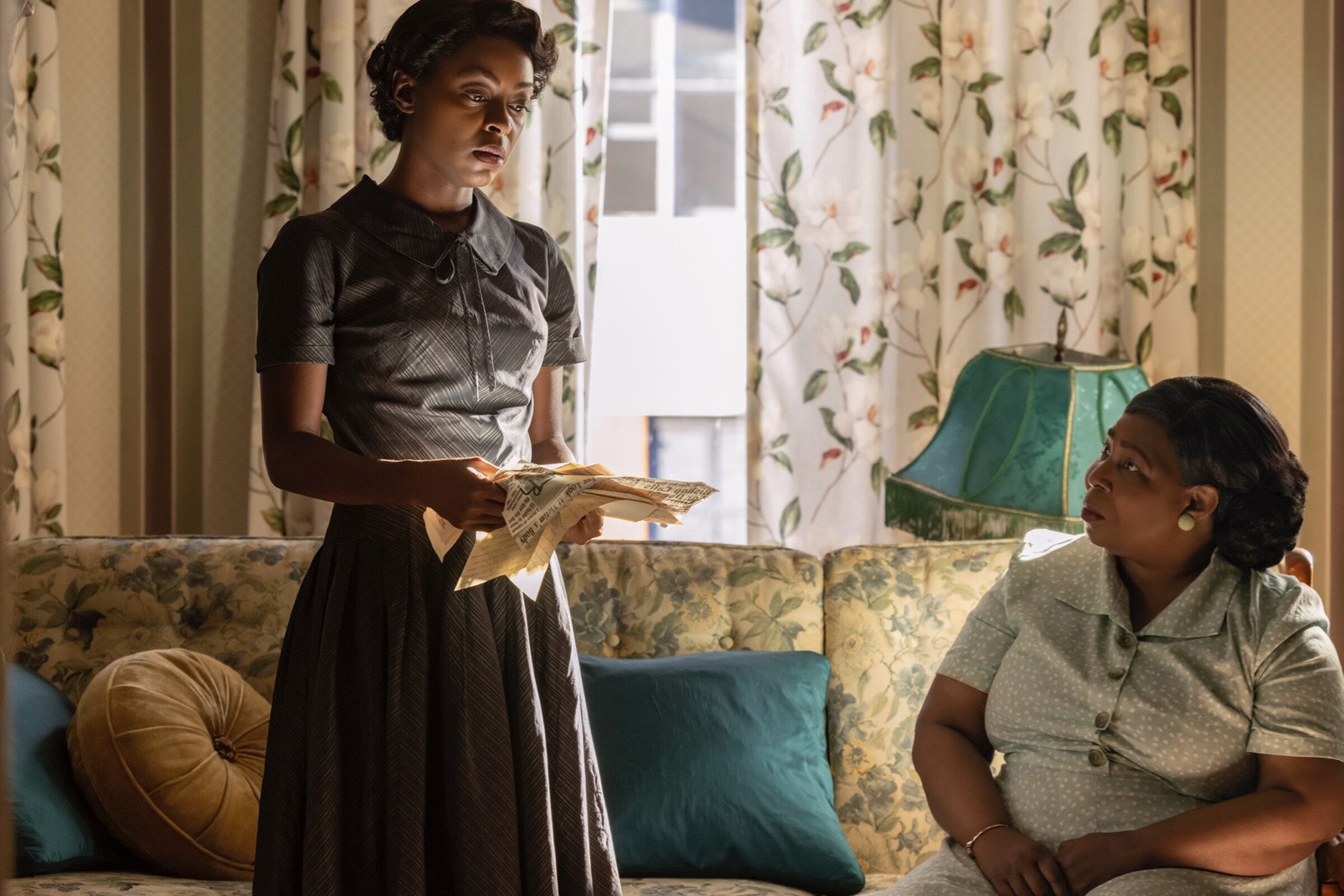 A determined Mamie Till-Mobley (Danielle Deadwyler) tells her mother Alma (Whoopi Goldberg) that she’s resolved to make America look at the battered remains of her murdered 14-year old son in “Till.”