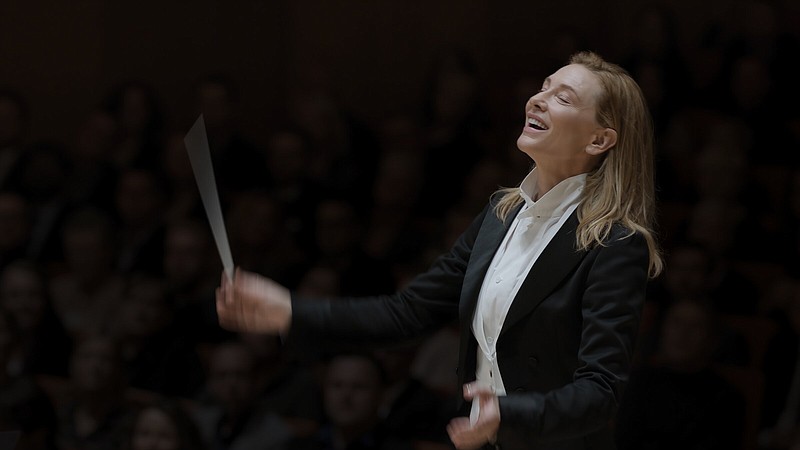 Imperious maestro Lydia Tár (Cate Blanchett) leads the Berlin Philharmonic through Mahler’s Symphony No. 5 in Todd Field’s examination of power and how it corrupts “Tár.”

We don't really meet Lydia Tár (Cate Blanchett), the protagonist in Todd Field's scorching #metoo drama, as much as we are appraised of her, in a fawning introduction before a live interview on stage with Adam Gopnik, of The New Yorker. He gushes on about her myriad accomplishments -- starting with leading the Cleveland Orchestra, then Philly's, and New York's, and finally, now with the Berlin Philharmonic, one of the plum assignments in all of conducting. She's apparently won more awards and grants than even Gopnik can list, along with earning an EGOT (Emmy, Grammy, Oscar, Tony), and having just published a memoir, titled "Tár on Tár."

This intro is so reverent, it runs several long minutes before we hear her actually speak. When she does, she is erudite, precise and unflinching. As the interview is being conducted, Field cuts in sequences with Tár at a fine tailor's, getting fitted for a new suit, and back to the celebratory interview, in front of hundreds of adoring fans, an empress in her garden, overlooking her loyal subjects.

Her success is so complete, her rise to the top of her prodigious profession so thorough, that she feels like a fait accompli unto herself, a force of nature not to be denied, gorged upon her own largesse. This impression is little dissuaded when we see her after the interview, doing a guest lecturer spot in a conducting class at Juilliard, where she absolutely eviscerates a violin student for not appreciating Bach. "He's another cis-white man," the student bemoans, before she takes his arguments apart in front of the class.

She lives in a thoroughly stunning apartment in Berlin, with her wife, Sharon (Nina Hoss), the music director of the "Berlin Phil," as they call it, and their young daughter, Petra (Mila Bogojevic). Having already put out eight new recordings of Gustav Mahler's symphonies -- naturally, to thunderous acclaim -- Lydia is embarking on the production of his Fifth, and perhaps most deeply complex, symphony. In short, she is at the full apex of her game, the world at her fingertips, the respect and reverence allotted a true giant.

So, why, then, does there seem to be such an undercurrent of discord in her life? Why does she sleep so fitfully, sparking awake to the slightest sound in her apartment -- a distant computer alert sing-song; the soft whine of her otherwise impeccable refrigerator -- and why does she seem so obsessed with her assistant, Francesca (Noemie Merlant), getting rid of a particular chain of emails sent to a former protege named Krista Taylor (Sylvia Flote)?

The answers are forthcoming, but not anytime soon. Field, a former actor, whose previous films, "In the Bedroom," and "Little Children," showed a penchant for slow-burning actor showcases, builds out the film in small, poignant snippets. We see Lydia over the course of what proves to be what you might call a meteoric downfall, in a variety of caught moments -- jogging in the woods and stopped fast by a woman's distant screams; working imploringly with the Berlin musicians; taking a shine to a new, young Russian cellist, Olga (Sophie Kauer); meeting with her old mentor, Andris (Julian Glover); or interacting with her daughter on the car ride to school -- until the bits and pieces starting adding up to exactly the kind of monster she has become (at one point, Sharon tells her all of her relationships are "transactional" except for Petra), and what she has allowed herself to do, ensconced as she is in the velveted throne of impeccable artistic acclaim.

It is a dense production, including many deep-in-the-weeds, jargon-laced conversations about the nature of music, and the philosophy of great art. It is also a long one, standing at better than two and a half hours, but the reward for this approach is as rich as buttercream. Carrying nearly every frame of the film from stem to stern, Blanchett is absolutely brilliant, riveting in her portrayal of a woman empowered to rewrite her own history -- in one brief scene, she returns to the house she grew up in outside New York, where her diffident brother refers to her by her given name, Linda -- and able to excuse her cruelties and whims with her estimable station, until, finally, she's stripped down and revealed.

In this way, it plays a bit like Scorsese's "Raging Bull," another portrait of a prodigious talent undone by their own emotional weaknesses. The downfall of Lydia, where she ends up, from where we first are introduced to her, is hauntingly reminiscent of Jake LaMotta, having to play at a seedy club for cheap chuckles years after winning the middleweight crown.

Neither character seems terribly interested in self-introspection -- a trait we are first meant to believe is one of Lydia's few humblenesses ("I don't want to catch myself in pastiche," she bemoans, at one point). They are sharks in need of perpetual motion in order to avoid such vulnerability, but in the odd moments -- as when Lydia wakes up in the middle of the night, out of breath and chagrined -- they have to know they were the devices of their own self-destruction. No matter how much they achieved, they still weren't able to escape themselves.