Advance slows but Ukraine fights on 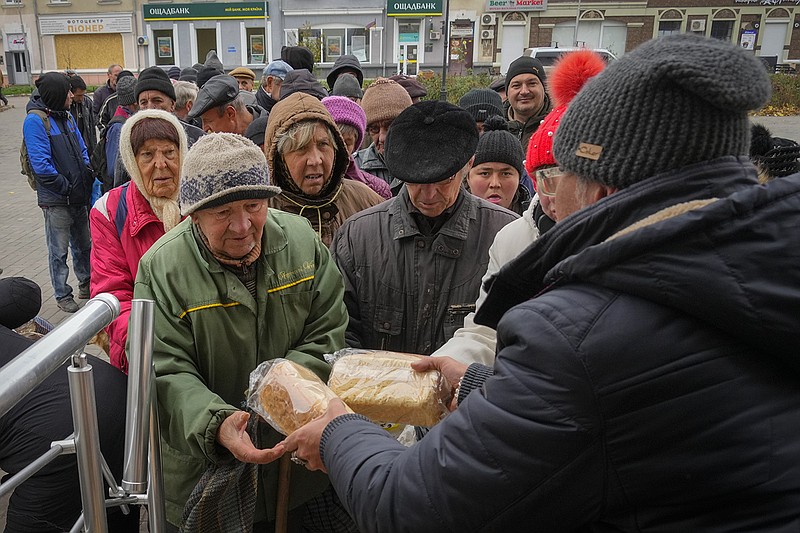 People line up for free bread from volunteers Friday in Bakhmut in eastern Ukraine. The city has seen some of the heaviest fighting of the war this week as Russian forces continue a heavy assault without gaining significant ground. (AP/Efrem Lukatsky)

KYIV, Ukraine -- While the Ukrainian march to reclaim lost land has been slowed by autumn mud, Kyiv's forces continue to press their advance in the south, attack hastily established Russian defensive lines in the northeast and defend against a grinding monthslong assault in the Donetsk region.

Both armies are now dealing with the challenges posed by the thick clay sludge that hindered Napoleon's army in 1812, slowed Hitler's advance on the eastern front in 1941 and wreaked havoc on Russia's plans for a lightning advance into Ukraine in the spring of this year.

Twice a year -- during the autumn rains and the winter thaw in the spring -- roads in Ukraine can be swallowed in slop, and fighting vehicles caught in the morass can find themselves vulnerable to enemy fire.

There is an old Russian word for the muddy seasons, "rasputitsa," and the Ukrainians call it "bezdorizhzhya," both essentially meaning "lack of roads." And without roads, as Ukraine's defense minister, Oleksii Reznikov, told reporters this week, the Ukrainian advance will move more slowly.

"This is the rainy season, and it's very difficult to use fighting carrier vehicles with wheels," he said.

Despite the adverse weather, battles raged as Ukraine sought to surround the important city of Kreminna, in the Luhansk region of eastern Ukraine, which was captured by the Russians in April. If the Ukrainians can retake it, they can compromise a vital Russian logistical artery used to supply units in Luhansk as well as in the northern part of the neighboring region of Donetsk.

The Institute for the Study of War, a Washington-based research organization, said the use of the powerful system could indicate either that the Russians are prioritizing the area "or that Russian forces lack sufficient artillery systems or ammunition more appropriate for standard fire missions."

Luhansk Gov. Serhiy Haidai underscored the challenges for its forces in the area.

He noted that heavy rains complicated the ability to move equipment. Since the swift advance of Ukrainian forces across northeastern Ukraine in September, he said the Russians have had time to bring reserves, damage bridges and further mine the territory as they fortified defensive positions.

Farther south, in the Donetsk region, Russian forces continued their frontal assaults on the battered city of Bakhmut, where they have failed to gain significant ground despite months of daily bombardments on military and civilian targets.

Ukrainian President Volodymyr Zelenskyy said this week that fighting around the town was some of the heaviest in the war.

"The craziness of the Russian command is now most visible there: Day after day for months, they drive people there to death, concentrate the maximum power of artillery strikes there," he said.

Military analysts have said the town -- which had a prewar population of 70,000 -- holds only minimal strategic value and that the Russian efforts there are better explained by the competition among disparate elements of the Russian military.

The Bakhmut offensive is being led by fighters from the Wagner mercenary group, and its founder, Yevgeny Prigozhin, has been seeking a higher profile as the military effort has foundered.

In Kherson, a largely agricultural area where wide-open plains are crisscrossed with irrigation canals, the wet weather has made conditions particularly difficult. While the mud is slowing the Ukrainian advance, ill-prepared Russian soldiers also are suffering.

The Ukrainian military high command said Friday that "the lack of warm clothes" had led to widespread "theft and looting" by Russian soldiers.

The Ukrainians also have sought to exploit weak morale among the Russian ranks. The Ukrainian military defense intelligence agency has released a steady stream of intercepted communications between Russian soldiers complaining about the grim conditions.

The Ukrainian military said Friday that "the unsatisfactory state of military equipment" had led to "unique cases of desertion and surrender." Those claims could not be independently verified.

The press service of Ukrenergo, the sole operator of Ukraine's high-voltage transmission lines, said in a statement that "emergency outages" of four hours a day or more had resumed in the Kyiv region.

Residents could expect to see "tougher and longer" power outages compared to earlier in the war, the capital region's governor, Oleksiy Kuleba, said Friday on Telegram.

Oleg Syniehubov, the governor of the Kharkiv region in northeast Ukraine, announced on Telegram that daily one-hour power outages would begin Monday across the province, including the regional capital, which is Ukraine's second-largest city.

He said the measures "are necessary to stabilize the power grid, because the enemy continues shelling [Ukraine's] energy infrastructure."

Officials across the country have urged people to conserve energy by reducing their electricity consumption during peak hours and avoiding the use of high-voltage appliances.

Zelenskyy said last week 30% of Ukraine's power stations had been destroyed since Oct. 10, when Russia launched the first wave of targeted infrastructure.

In the Zaporizhzhia region, Kremlin-appointed officials urged residents Friday not to switch to daylight saving time along with Kyiv and the rest of the country.

"The old time remains. The clocks will not go back in 2022," the administration said in a post on its official Telegram channel.

The Russian-installed mayor of Enerhodar, where Europe's largest nuclear power plant is located, also called on residents to ignore the time switch.

"We live in the Russian Federation, and our city lives by Moscow time," Alexander Volga said in a video posted on Telegram.

Russia switched to permanent winter time in 2014. The move came after nationwide surveys found that citizens largely disapproved of an earlier government decision to put clocks on year-round summer time and struggled to adjust to long, dark mornings.

Moscow has repeatedly claimed that Ukraine is preparing to detonate a device that spreads radioactive waste on its own territory while trying to blame Russia. Western officials have dismissed the claim as misinformation possibly designed as a pretext for Russia to justify its own military escalation.

The U.S. and its Western allies dismissed Russia's claims Thursday that banned biological weapons activities are taking place in Ukraine with American support, calling the allegation disinformation and fabrications.

Russia's U.N. ambassador said Moscow will pursue a U.N. investigation of its allegations that both countries are violating the convention prohibiting the use of biological weapons.

Russia's allegation of secret American biological warfare labs in Ukraine has been disputed by independent scientists, Ukrainian leaders and officials at the White House and Pentagon. An Associated Press investigation in March found that the claim was taking root online, uniting covid-19 conspiracy theorists, QAnon adherents and some supporters of former President Donald Trump.

Ukraine does have a network of biological labs that have gotten funding and research support from the U.S. They are owned and operated by Ukraine and are part of the Biological Threat Reduction Program that aims to reduce the likelihood of deadly outbreaks.

U.S. Ambassador Linda Thomas-Greenfield called Thursday's U.N. Security Council meeting "a colossal waste of time" and rejected Russia's allegation as "pure fabrications brought forth without a shred of evidence." She said the claim is part of a Moscow "disinformation campaign" that is attempting "to distract from the atrocities Russian forces are carrying out in Ukraine and a desperate tactic to justify an unjustifiable war."

Other council members including China and India focused on a key problem with the biological weapons convention: Unlike the convention banning the use of chemical weapons, it has no provision to verify compliance and investigate complaints.

China's deputy U.N. ambassador, Geng Shuang, urged a late November conference of the 197 state parties to the convention to restart verification negotiations "that have been stalled for more than 20 years."

Last month, the state parties met at Russia's request on the activities at biological laboratories in Ukraine, but a final report said it wasn't possible to reach a consensus.

In his briefing, Russian Ambassador Vasily Nebenzia accused the U.S. of conducting work in Ukraine with deadly pathogens -- including cholera, plague, anthrax and influenza -- that couldn't be justified under the guise of public health. He said documents and evidence recovered by Russian authorities suggested a military application.

Nebenzia said the Russian military had recovered drones capable of spraying bioagents as well as documents that he said related to research on the possibility of spreading pathogens through bats and migrating birds.

Nebenzia said Russia will move ahead on the resolution calling for a Security Council investigation. He said a second meeting of council experts is the next step "and then we will be deciding when we'll put it to the Security Council."

The Pentagon is sending Ukraine a new $275 million package of weapons and other aid in a move to bolster the effort to drive Russian forces out of key areas in the south as the winter closes in, U.S. officials said Thursday.

Officials said there are no major new weapons in the U.S. package, which was expected to be announced Friday. Instead, the U.S. aid is largely aimed at restocking thousands of rounds of ammunition for weapons systems already there, including for the High Mobility Artillery Rocket Systems, known as HIMARS, which Ukraine has been successfully using in its counteroffensive against Russia.

The officials spoke on condition of anonymity to discuss details of a package not yet made public.

The plan, announced Thursday by the State Department, notes that accounting for weapons is particularly difficult during an active war and when there is no major U.S. presence on the ground.

The three-prong plan includes short-, medium- and longer-term initiatives to bolster U.S. and Ukrainian oversight of transferred materiel, particularly more-advanced missile systems and anti-aircraft devices, as well as to improve Ukraine's aviation and border security to combat the misuse of weapons and prevent possible arms trafficking, it said.

U.S. Defense Secretary Lloyd Austin told reporters Thursday that he expects that the U.S. will deliver the advanced NASAM air defense systems to Ukraine early next month and train troops on them.

According to officials, the latest aid package will be done under presidential drawdown authority, which allows the Pentagon to take weapons from its own stock and quickly ship them to Ukraine.

Including the new $275 million, the U.S. has now committed nearly $18 billion in weapons and other equipment to Ukraine since the war began.

Information for this article was contributed by Marc Santora of The New York Times and by Edith M. Lederer, David Klepper, Lolita C. Baldor, Matthew Lee, Tara Copp and staff members of The Associated Press. 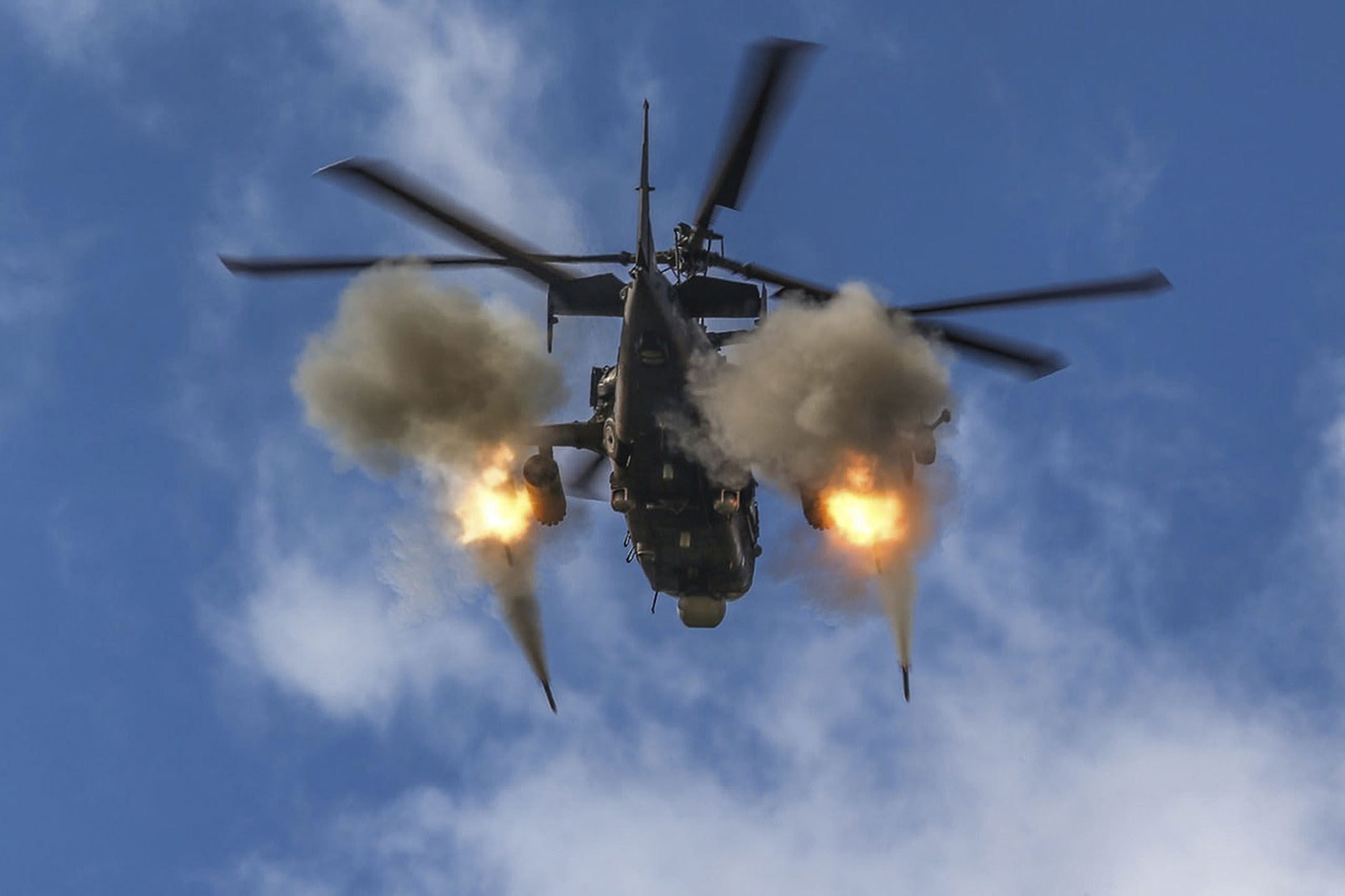