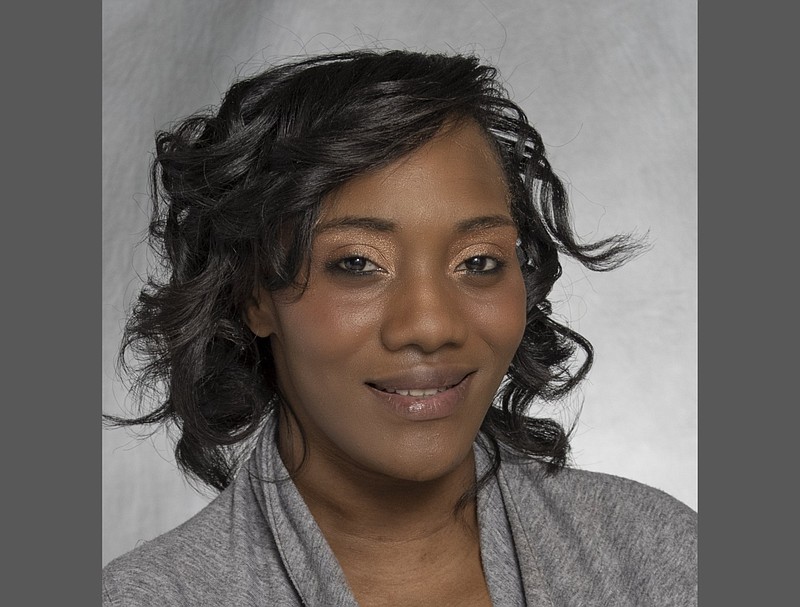 Little Rock police on Friday morning arrested a woman who is the Democratic candidate for Arkansas state auditor on a felony warrant, jail records showed.

A felony conviction would bar Diamond Arnold-Johnson, 32, from running from office, per the Arkansas Code, but it was not clear what would happen if she was elected on Nov. 8 and was later convicted.

Arnold-Johnson appeared Friday evening in the Pulaski County jail's online inmate roster, but Little Rock police spokesman Mark Edwards was not able Friday to provide the incident report covering her arrest or any details about it, including time or location.

A Facebook Live video shared by Arnold-Johnson on Friday morning showed her speaking with Little Rock officers through a closed door before eventually surrendering and being handcuffed.

Republican Dennis Milligan of Benton, one of Arnold-Johnson's opponents, on Friday called for her to withdraw from the race, calling her "unfit to hold the office."

"Anyone who has an active felony warrant for their arrest should not be running for office or handling the state's very important financial business," Milligan wrote. "Rather, their time and energy would benefit more from focusing on their's and their spouse's legal morass."

If Arnold-Johnson does not withdraw, Milligan wrote, the Democratic Party of Arkansas should "repudiate and distance themselves" from her as a candidate.

The Democratic Party of Arkansas did distance themselves from Arnold-Johnson in a statement Friday released before Milligan's.

"Everyone has the right to due process; however, our Party firmly believes people must be held accountable for any criminal behavior, especially candidates for public office," the release states. "The Democratic Party of Arkansas did not recruit her to run for Auditor of State, and we cannot bar her from running for this position."

In an interview Friday afternoon, Snow said he regrets what Arnold-Johnson's family and friends are going through because of the arrest. He said that if voters research the candidates for the position, they will see that he is the most qualified for the role.

Although the incident report from Friday's arrest was not available, Arnold-Johnson and her husband, Arick Johnson, 36, were both listed as suspects in an Aug. 29 incident report concerning first-degree terroristic threatening.

The report stems from an attorney who called police and said that Johnson, a former client, posted on Facebook that "12 jurors" gave him "the green light" to "make an example out of" the attorney, her peers and her family, the report states.

His post also listed the victim's address as "the next target by any means necessary." The post did not appear on his Facebook page Friday afternoon.

Although Arnold-Johnson is listed as a suspect, she is not mentioned in the narrative of the report, so it was unclear how or if she was involved. Neither she nor her husband were arrested at the time.

Police on Oct. 13 came to Arnold-Johnson's home and tried to serve a warrant for felony first-degree terroristic threatening, according to a police incident report and another video on her Facebook, but she refused to leave her residence and was not arrested.

The Oct. 13 incident was first reported by blogger Russ Racop of the Snarky Media Group.

Arnold-Johnson in a Thursday interview called the attempt to serve the warrant "malicious prosecution" and abuse of power by police.

"This is a form of harassment," she said.