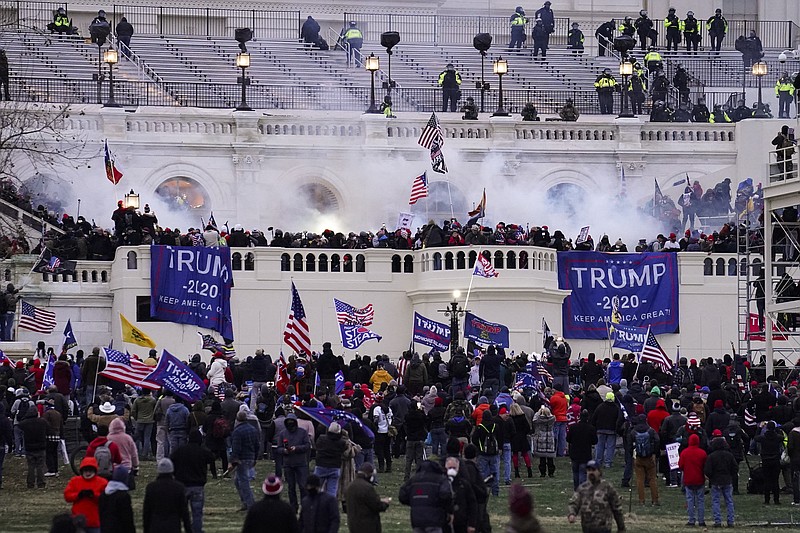 FILE - Violent rioters, loyal to President Donald Trump, storm the Capitol in Washington, Jan. 6, 2021. A former U.S. Capitol Police officer was convicted of obstruction of justice on Friday, Oct. 28, 2022, for deleting Facebook messages he exchanged with a man who participated in the Jan. 6, 2021 insurrection. Jurors were unable to reach a verdict on a second count of obstruction against Michael A. Riley, 51, that stemmed from Riley warning the rioter to remove part of a Facebook post showing the person inside the Capitol during the riot. (AP Photo/John Minchillo, File)

WASHINGTON -- A former U.S. Capitol Police officer was found guilty Friday of obstructing justice for deleting Facebook messages he exchanged with a man who participated in the Jan. 6, 2021, riot.

Jurors were unable to reach a verdict on a second count of obstruction against Michael Riley, 51, that stemmed from Riley warning the rioter to remove part of a Facebook post showing the person inside the Capitol during the riot.

Riley was arrested last year on accusations that he helped hide the rioter's involvement in the attack that left many of his own colleagues brutally beaten by the pro-Trump mob. He's the only Capitol police officer charged with a crime involving the riot.

An email seeking comment was sent Friday to an attorney for Riley, who responded to a report of a pipe bomb on Jan. 6 and had been a Capitol Police officer for about 25 years before his arrest. Obstruction of justice carries a possible sentence of up to 20 years behind bars.

The day after the riot, Riley sent the person a Facebook message, identifying himself as a "capitol police officer who agrees with your political stance."

"Take down the part about being in the building they are currently investigating and everyone who was in the building is going to be charged," Riley wrote, according to court documents.

Riley and the rioter exchanged numerous messages over several days after the Jan. 6 attack. At one point, Riley told the rioter that the scene was a "total s-- show."

"I'm glad you got out of there unscathed. We had over 50 officers hurt, some pretty bad," the officer wrote, according to the complaint.

When the rioter said through messaging that he didn't think he'd done anything wrong, Riley responded: "The only thing I can see is if you went into the building and they have proof you will be charged. You could always articulate that you had nowhere to go, but that's for court."

After the rioter was arrested, the rioter told Riley that the FBI was "very curious" that the two had been communicating. Riley then deleted all of his Facebook messages with the rioter, according to court papers.

Riley took the stand in his defense and told jurors that he was misled about the man's involvement in the riot and believed the rioter when he posted on Facebook that he had been pushed into the Capitol by the mob, NBC News reported.

"I was embarrassed, because I had reached out to him in the first place and allowed myself to get in a position like this," Riley told jurors, according to NBC.

Riley testified that he was upset about what happened on Jan. 6, noting that Capitol police had "a lot of officers who were hurt." He insisted that messages were not an attempt to help the man avoid charges and he deleted his messages with the rioter because he was mad, NBC reported.