IN THE GARDEN: Pruning assistance can be a job for a landscaper or community volunteer 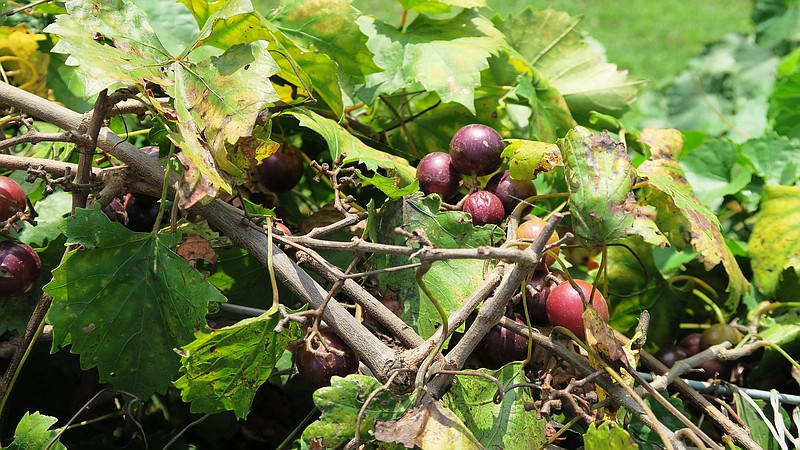 Muscadines must be pruned every year if you want them to bear good crops of sweet, chewy fruit. (Special to the Democrat-Gazette/Janet B. Carson)

Q: Our muscadines need to be pruned. I have found no one available to do the pruning. Do you know of anyone who might be willing to prune the vines? I am physically unable to do it myself. It is not a large area of vines.

A: I would check with some of the landscaping crews to see if they have someone they could recommend. My advice would be to be on hand to direct the pruning. You might also check with a church or Scout troop to see if they could have a willing body to prune — as long as you are there to tell them how. The time to do the pruning is late February. Good luck.

Q: My hydrangea leaves are turning up. Can you tell what is wrong? Thank you, I live in Dumas.

A: It doesn't look good. If I had not seen the sprinkler head behind the plant and the healthy Hosta leaves in front of the hydrangea, I would have guessed drought stress. I assume you are watering. Is the soil drainage good? How long has the problem been going on? How long has the plant been in the ground? Too much water can be as detrimental as not enough, but I cannot imagine they got too much water this season. Investigate to see if anything has damaged the crown of the plant. You may have to wait for spring to see whether it survives.

Q: My 6-year-old fig tree is very healthy but produces small green figs beginning in April that fail to ripen or get bigger. The exception was last year when I picked enough for four pints of preserves, so I know the potential is there. It gets full sun only from noon to 5 p.m., is well watered and shows no sign of distress. Any ideas?

A: Many fig trees have the potential to set two crops of figs per year. They often form an early crop called the breba crop, which is from buds they set at the end of the growing season; and later the main crop is born on new growth. Often with our fluctuating temperatures, the breba crop doesn't mature or continue to grow. A tree should still set a crop of figs on the new growth. If we have a hard winter, sometimes the fig trees are nipped back, and the trees spend time recovering and not setting as much fruit.

Q: I did not get everything moved before the cold hit [two weeks ago], and I noticed that some of the houseplants still look fine. Is there anything I can do to make sure their transition inside goes smoothly?

A: Low temperatures vary depending on where you live in the state. Most houseplants are tropical plants and prefer temperatures not fall below 50 degrees, but they can survive unless there is a freeze. We like to get them moved indoors when outside and inside conditions are similar, because growing conditions in a home are difficult in the winter months. Humidity is very low, light is typically lower than outside, and there is usually a more constant temperature instead of cooler nights and warmer days. Tropical plants begin to start adapting to cooler weather outdoors, which makes the transition to the inside conditions even more challenging, and that can lead to a lot of leaf shed. Move the plants to the coolest, brightest room indoors and monitor for pests.