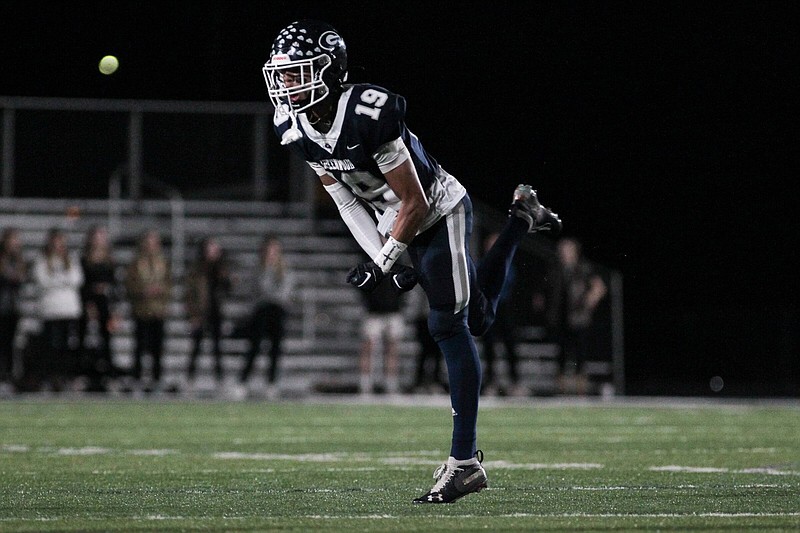 Greenwood defensive back Isaiah Arrington celebrates a fourth-down stop during Friday night’s game against Pulaski Academy at Smith-Robinson Stadium in Greenwood. The Bulldogs defeated the Bruins 33-23 to remain undefeated in the 6A-West Conference. (Special to the NWA Democrat-Gazette/Shane Cossey)

Greenwood's defense stifled Pulaski Academy's high-powered offense especially in the second half and the Bulldogs rallied to a 33-23 win at Smith-Robinson Stadium to take control of the 6A-West and win one of the state's most-anticipated games of the season.

Greenwood (8-1, 7-0) clinched the top seed in the Class 6A playoffs with the win and can earn the outright conference title with a win at Little Rock Christian next week.

The win was also the Bulldogs' 55th straight at home and improved them to 54-3 in conference play over the past nine seasons.

"I'm really proud of them," Greenwood Coach Chris Young said. "It just shows when you have great preparation and great effort what happens."

Pulaski Academy (8-1, 6-1) suffered just its second conference loss since 2010 and had a 19-game winning streak snapped.

"I'll promise you this, we'll see Greenwood in the state championship [game]," Pulaski Academy Coach Anthony Lucas said. "I guarantee you that."

"Our kids are selfish. They like the attention," Young said. "They don't like hearing about how many games PA has won in a row. They have tremendous respect for PA, and I'd be more than happy to see them again because that would mean we're in the final."

Both defenses ruled Friday night in a physical game and both starting quarterbacks -- Greenwood's Hunter Houston and Pulaski Academy's Kel Busby -- were knocked from the game in the second half.

Trailing 23-16 after Kenny Jordan scored on a 3-yard run for Pulaski Academy, Greenwood's Kaleb Garner recovered the onside kick and the Bulldogs drove 56 yards to tie the game.

Archer completed three straight passes early in the drive, two to Peyton Presson and another to L.J. Robins, before senior running back Jake Glover capped the drive with a 5-yard scoring run, bouncing off a tackle, with 11:25 left in the game.

Garner recovered a fumble to halt Pulaski Academy's next possession. The Bulldogs went 43 yards in six plays to take the lead with Archer throwing to Grant Karnes, who muscled the pass away from a defender to complete a 14-yard scoring play with 8:15 left

Greenwood's defense stopped Pulaski Academy on fourth down on the next drive, but Patton Whicker blocked a field goal to keep the Bruins alive with 4:14 left.

But Greenwood again made a fourth-down stop, and Steinfeldt kicked a 28-yard field goal with 2:34 left for a 33-23 cushion.

"We thought about it more than once," Young said. "You've got to kick it there and go up two scores on them, and then hope to stop them like we did at the end. When you're up seven, they're not going down to tie you, they're going down to beat you. It messes with your head. That's why we kicked it. Our kid made a great play and put it through."

Defensive back Isaiah Arrington sealed the win with an interception at Greenwood's 10 with 1:35 left.

"Our coaches worked all week: offense, defense, kicking game," Young said. "We had a great game plan and practiced real well all week."

Greenwood recovered all four of Pulaski Academy's onside kick attempts, while the defense held steady on 7 of 9 fourth-down tries and forced four turnovers.

"What a game tonight. I call it a worm burner," Lucas said. "We knew it was going to be a fight. Everybody marked this on their schedule. Greenwood's a good ball club. In the second half, I thought they played a lot harder than we did."

Both teams opened with scoring drives. Jordan scored on a 9-yard run on the first possession of the game and Busby hitting John Mark Charette with the 2-point pass. Greenwood then scored on Houston's 16-yard touchdown toss to Presson. Houston was stopped short on the 2-point attempt, leaving Pulaski Academy with an 8-6 lead.

Then the defenses asserted themselves with both teams failing to score on four straight possessions.

On the final series of the first half, each team scored.

Jordan scored on a 7-yard run and Walt Smiley added the extra point to put Pulaski Academy up 15-6 with 2:20 left in the half.

Greenwood answered with Houston scoring on a 1-yard run around the right side with eight seconds left in the half to trim the deficit to 15-13.

"The kids played hard, it gives you a chance to win," Young said. "Defensively, the kids were flying around and making plays."

Jordan had 26 carries for 183 yards for Pulaski Academy. 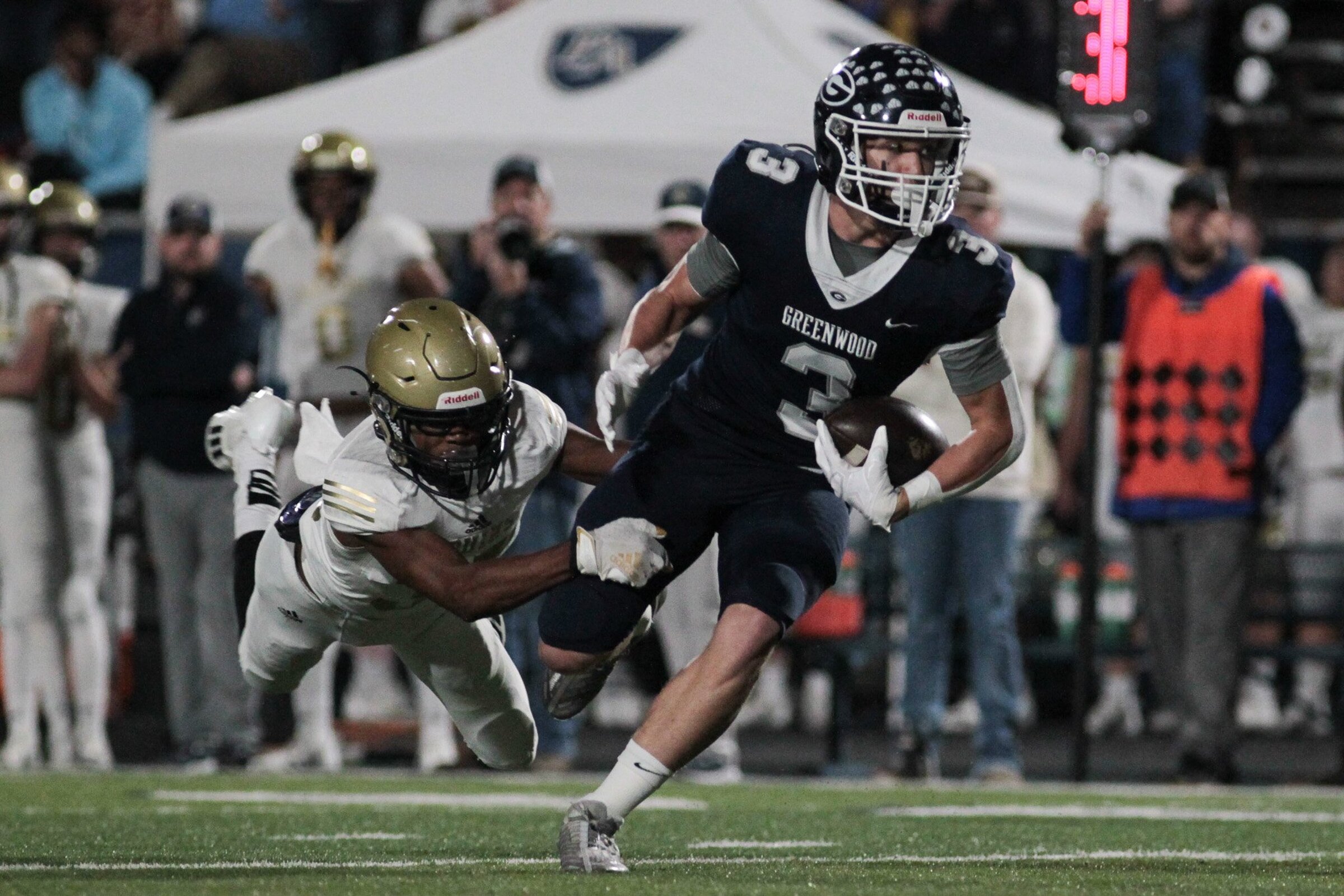