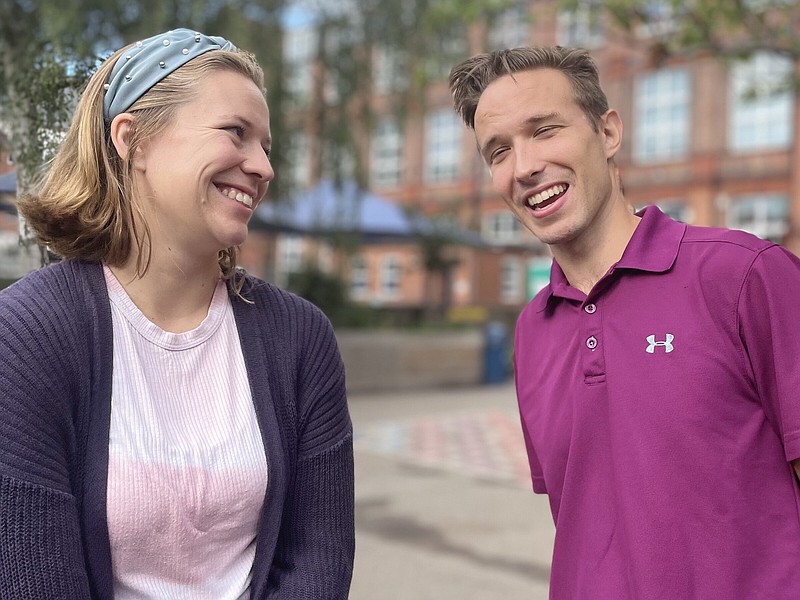 On the grounds of Salusbury Primary School, where their evangelical church meets each week, missionaries Megan and Seth Campbell laughed repeatedly as they described their transition from Fayetteville to London. "I love exploring the city. We’re never bored unless we want to be bored," Megan Campbell said. (Arkansas Democrat-Gazette/Frank E. Lockwood)

LONDON -- Great Britain, which gave the world the King James Bible, the Book of Common Prayer, Handel's Messiah and Methodism, was once a Christian stronghold, exporting the gospel -- and the Church of England -- to every corner of the globe.

These days, it's a mission field, Seth and Megan Campbell say.

The University of Arkansas graduates, missionaries in this city of 9 million since August 2021, are helping to plant an evangelical church, Redeemer Queen's Park, in a neighborhood roughly 4 miles northwest of Buckingham Palace.

Nearly five centuries after King Henry VIII broke away from the Catholic Church, the country's skyline, in many areas, still looks Christian.

"There's not a shortage of churches. When you look around London, you'll see a lot of steeples. You won't see a lot of people [in them]," he said.

Only 2% of Londoners are evangelicals and Christian organizations of all stripes are struggling, he said.

"There are still a few strong Anglican churches, a few strong Catholics," he said. "I think with every generation that goes by, there's less and less."

The Campbells are working with other Americans to help change that.

The couple's pathway to overseas ministry began in October 2020.

Newlyweds at the time, they learned about the decline of Christianity in England after a Cross Church Northwest Arkansas video highlighted Redeemer Queen's Park's efforts to reach the people of London.

As they watched it, she and her husband, independently, felt like God was calling them to join in the effort, Megan Campbell said.

They believed, if it was God's will, that doors would open, she said.

And open they did.

MOVING TO THE UK

In Fayetteville, Seth had studied broadcast journalism; Megan had majored in math, with minors in teaching and Spanish.

The United Kingdom, they quickly learned, isn't desperate for journalists, but it does have a shortage of math instructors.

When British officials discovered that Megan had completed her student teaching and was eager to be an educator, the immigration obstacles vanished.

"It was crazy how fast everything moved," she said. "We watched that video the first weekend in October and then we moved here in August of the next year, so it was less than a year."

To help raise the money, they sold "everything that we owned," she said.

"Everything you can think of, basically," Megan Campbell added.

By the time they were done, they had little left.

Seth, a multimedia reporter for the Northwest Arkansas Democrat-Gazette, and Megan, a member of the Cross Church staff, quit their jobs, packed up their few remaining possessions and headed to England.

"Pretty much the only thing we brought over here was clothes, shoes, pictures and books, and that's basically it," she said. "We moved over here with four suitcases, two carry-ons and two backpacks."

For Megan, finding work was easy. The job search for Seth took a little longer, and his lack of employment, the first month, made things challenging.

"Two of us living in London with London prices on a teacher's salary was not sustainable," he said.

While he looked, he took whatever temporary work he could find.

After roughly six months, he was offered a position at Redeemer working with young adults.

"I'm loving every minute of it," he said.

They're required to wear uniforms, the sort of clothes worn by the students at Hogwarts in the "Harry Potter" series, she noted.

"They're all in green blazers, black trousers or skirts, a white shirt that's a button up," she said. "The boys have to wear green and yellow ties."

It takes her an hour and 10 minutes to commute to and from her school, she said last month.

"I have to daily be dependent on the Lord for my strength. Otherwise, I'm going to be exhausted. I'm going to be a bad [representative]. It's definitely challenging," she said.

London is an extraordinary city, with some of the best museums and parks in the world. "We're never bored unless we want to be bored," Megan said. But she's there, she says, because that's where she believes God has called her to be.

"One of the simplest ways of showing the Lord that you love him is just saying 'yes' to what he tells you to do," she said.

Regular churchgoing, as measured by the Church of England and others, has been in free fall for decades.

The vast majority of those who identify as Christians are not churchgoers, even on Christmas and Easter, statisticians say.

Many, Seth Campbell said, used to show up for "the big three life events: When you marry, you're buried or [after] you're born."

These days, even that is waning.

The U.K. Evangelical Alliance estimates that 6% of the population are "practicing Christians."

In a single decade, baby baptisms or celebrations, marriages or services of prayer and dedication, and funerals fell 37%, 42% and 31%, respectively.

Many people have tried to reverse those trends; many have failed.

Megan knows the numbers, the enormity of the challenge, but it hasn't deterred her.

"I just want to be here, live my life the way Christ would want me to, and be able to share with people where my hope comes from," she said. "It's in the Lord, and the Lord has never let us down."

They both show up an hour or so early to help prepare for the weekly services, which are held in an area grammar school. They stick around an hour or so afterward to help return the room to its original state, he said.

Megan leads the music from time to time.

"Churches like this don't get started and they don't sustain without people like the Campbells who love Jesus," West said.

They "aren't looking for the limelight or the spotlight," he said. "[They] just are here to serve and help build the church. They're wonderful people. We would not be the same without them."

He expressed appreciation, as well, for the entire Cross Church family, noting that it is providing Redeemer with prayer and financial support.

"Nick [Floyd, its pastor,] has become a personal friend and encourager to me, and I'm very grateful," West said.

Cross Church's goal, announced in late 2020, is to plant 10 new churches by 2030, according to Brian Dunaway, its director of communications and technology.

"God calls us to go spread the gospel to the ends of the earth so that's what we do," he said.

Thus far, it has helped launch three, including the one in London, Dunaway said. Details about a fourth will be announced next month, he added. 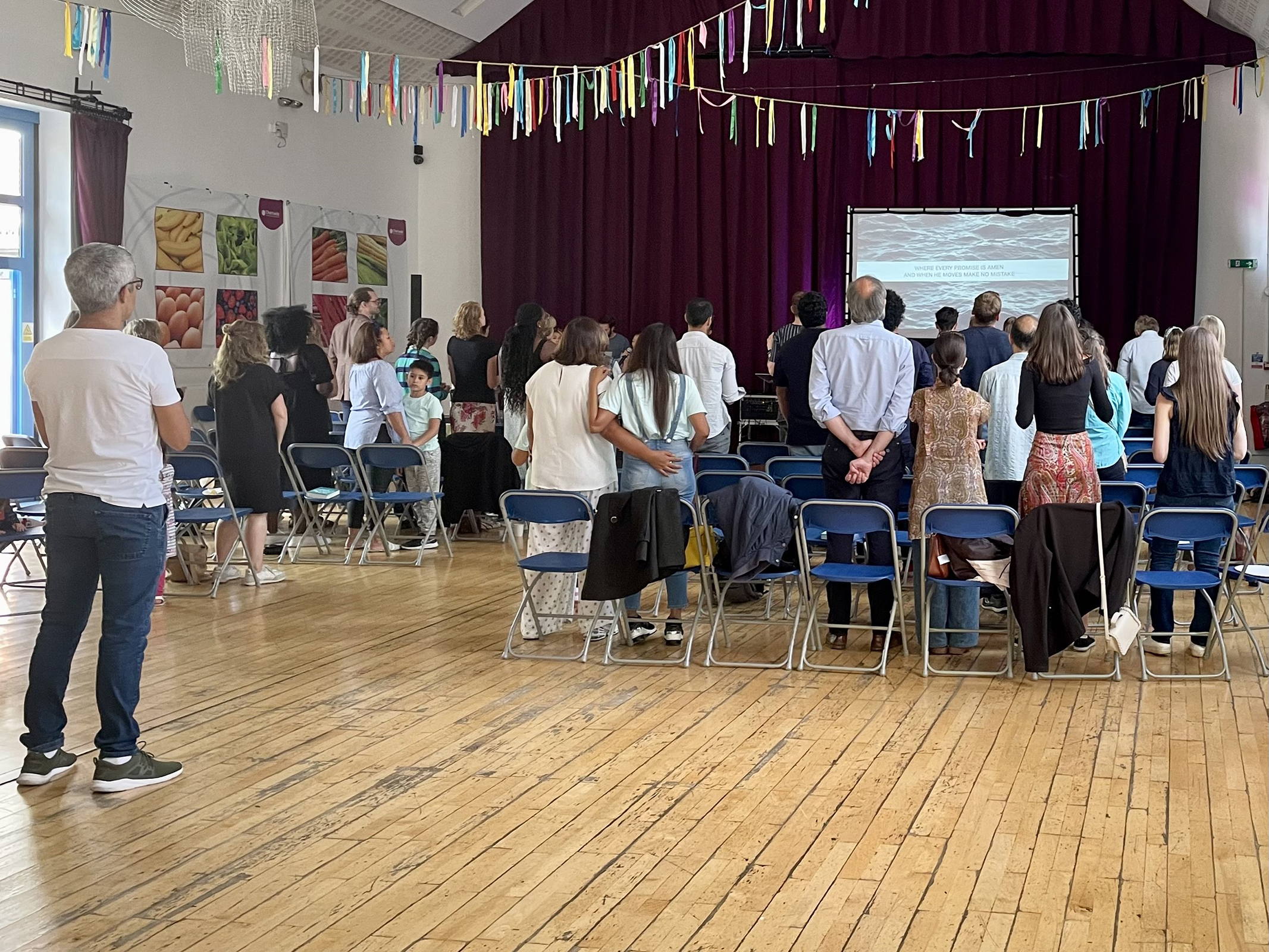