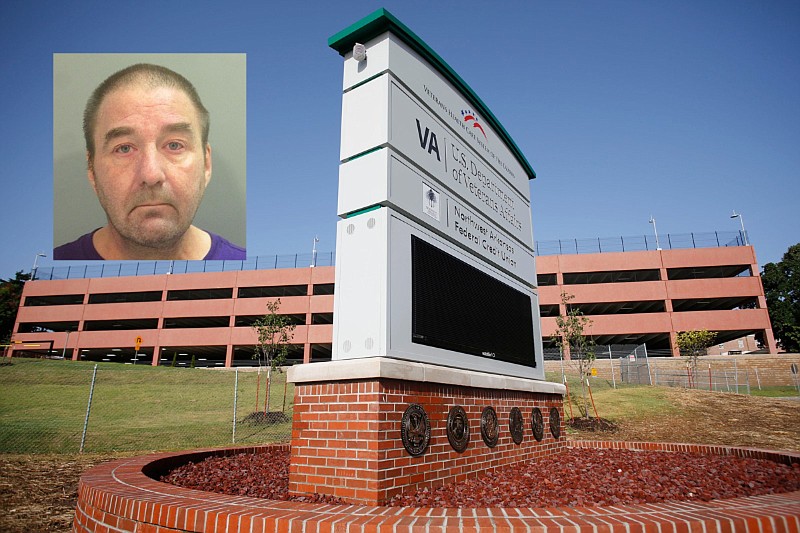 Robert Morris Levy (inset), a former pathologist with the U.S. Department of Veterans Affairs who worked at locations including the Veterans Health Care System of the Ozarks, pleaded guilty in June 2020 to one count of manslaughter for missed diagnoses and was sentenced in January 2021 to 20 years in federal prison. A Veterans Affairs investigation concluded that Levy spent years working while intoxicated and that he had an error rate more than 12 times normal for pathology. (Main photo, NWA Democrat-Gazette/David Gottschalk; inset, courtesy photo)

FAYETTEVILLE — A federal judge awarded $4.7 million to survivors of Jerry Kolpek, an Army veteran whose cancer went untreated for more than six years because of a missed diagnosis at the Veterans Health Care System of the Ozarks.

The family asked for $15 million, but the judgment derives from other factors, including Arkansas law, in awarding damages, U.S. District Judge Timothy Brooks said in his ruling Friday. The federal government never contested that the Kolpek family was due damages, only that the requested amount was excessive, court documents show.

The two-day trial on the sole issue of damages ended Wednesday.

“We are grateful to the court for its thorough consideration of the evidence and providing the parties such a timely judgment,” said Alan Lane of Fayetteville, an attorney for the Kolpeks and other victim families. “The Kolpek family is hopeful the court’s decision will be of some benefit to the veterans and families whose cases remain to be heard.” Although the federal government is immune from civil claims in many cases, exceptions are allowed, Thursday’s order says. The right of the Kolpek estate to sue in this case because of negligence by the pathologist who missed the diagnosis and the health system’s failure to prevent that negligence was not disputed, court records show.

Kolpek, a former Bella Vista resident who died at age 83, was tested for cancer after a regular checkup in 2012. Dr. Robert Morris Levy, a former chief pathologist at the VA hospital in Fayetteville, missed Kolpek’s diagnosis and others. He was suspended after a March 1, 2018, arrest in Fayetteville in connection with driving under the influence. He was later fired after a U.S. Department of Veterans Affairs investigation concluded that he worked while intoxicated for years and had an error rate more than 12 times normal for pathology.

The Kolpek lawsuit is the first of eight lawsuits from the families of former patients, five of whom died before the suits were filed. The next case comes to trial Tuesday.

The upcoming case stems from the death of Donald R. McGuire of Eureka Springs. His primary care doctor ordered a biopsy of McGuire’s prostate in January 2009, according to his estate’s lawsuit. Levy reviewed McGuire’s pathology material and found the biopsy negative for cancer, the lawsuit says. Levy then falsified McGuire’s medical records by stating that a second pathologist at the Fayetteville hospital agreed with him, according to the suit.

McGuire went without treatment for cancer for five years and seven months because of the missed diagnosis, according to the lawsuit. He died April 28, 2016, at age 84.

Levy pleaded guilty in June 2020 to one count of manslaughter for missed diagnoses. He was sentenced in January 2021 to 20 years in federal prison.

Kolpek was a Minnesota native who lived in his home state after retirement in 1999 and then bought a second home in Bella Vista, which he lived in for half of each year. He had moved to Clear Lake, Iowa, in 2014 to be near family when his wife, Jo, developed health problems. He died Dec. 31, 2020, three weeks before Levy’s sentencing.

Levy was first found drunk on the job in 2016. He returned to work after going to a rehabilitation program and agreeing to submit to random tests for alcohol. Levy then used his medical training to obtain and use a drug, 2m-2b, that is intoxicating, but cannot be found with traditional blood or urine tests for alcohol. He passed 42 drug tests in a two-year period after returning to work.

The Department of Veterans Affairs began a re-examination of all 33,902 cases Levy worked on from 2005 to 2017. The review found 3,029 errors, 30 of them serious enough to have lasting health consequences. Levy examined six of Kolpek’s tissue samples on Jan. 30, 2012, and incorrectly found the sampled tissues to be benign, the lawsuit states.

Levy’s 3,029 errors out of 33,902 cases made for an error rate of 8.9% compared to a pathology practice average of 0.7%, a Department of Veterans Affairs review found.

Kolpek learned of the missed diagnosis in 2018 and went for medical tests at a veterans hospital in Des Moines, Iowa. Doctors told Kolpek the cancer had spread through his bones from his pelvis up his spine to the base of his skull and throughout his rib cage. His weakened skeleton meant he wouldn’t survive, for instance, a car crash if his air bag deployed, Kolpek said in video testimony filmed before his death and played at the trial Tuesday.

A Department of Veterans Affairs Office of the Inspector General’s report on the case said investigators found a culture at the health care center in which staff didn’t report serious concerns about Levy, in part because of a perception that others had reported or because they were concerned about reprisal.

Levy was in charge of the quality management program of his own department, the inspector general found. The situation went on for 12 years, the report noted.