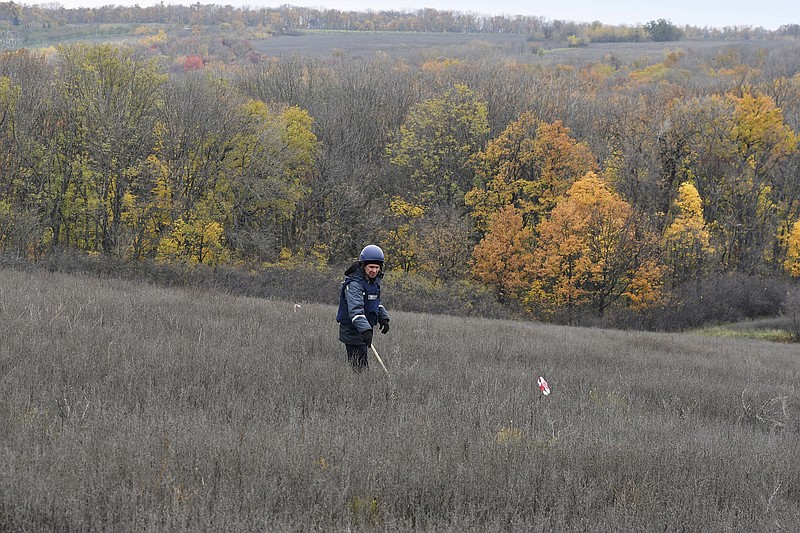 KYIV, Ukraine -- Russia announced Saturday that it will immediately suspend its implementation of a U.N.-brokered grain deal that has seen more than 9 million tons of grain exported from Ukraine during the war and has brought down soaring global food prices.

The Russian Defense Ministry cited an alleged Ukrainian drone attack Saturday against Russia's Black Sea Fleet ships moored off the coast of occupied Crimea as the reason for the move. Ukraine has denied the attack, saying the Russians mishandled their own weapons.

The Russian declaration came one day after United Nations Secretary-General Antonio Guterres urged Russia and Ukraine to renew the grain export deal, which was scheduled to expire Nov. 19. Guterres also urged other countries, mainly in the West, to expedite the removal of obstacles blocking Russian grain and fertilizer exports.

The Russian decision, which United Nations and Ukrainian officials said could exacerbate hunger, brought to a screeching halt a rare case of wartime coordination that had allowed the movement of agricultural products, many of them bound for poor countries.

Stephane Dujarric, a spokesperson for Guterres, called on the warring parties to ensure that the grain deal continued.

"It is vital that all parties refrain from any action that would imperil the Black Sea Grain Initiative, which is a critical humanitarian effort that is clearly having a positive impact on access to food for millions of people around the world," Dujarric said.

"Russia is doing everything to ensure that millions of Africans, millions of residents of the Middle East and South Asia, find themselves in conditions of artificial famine or at least a severe price crisis," he said, urging a strong international response.

"The world has the power to protect people against this," he added.

By suspending the grain agreement, Russia would "again be trying to use the war it started as a pretext for weaponizing food," said Adrienne Watson, a spokesperson for the U.S. National Security Council.

The size of Saturday's attack and the extent of the damage it caused remained unclear.

In a statement, the Russian Foreign Ministry accused Ukraine of launching "massive air and sea strikes using drones" on its Black Sea Fleet's ships, infrastructure and naval base in the port city of Sevastopol.

That meant, the ministry said, that Russia could no longer ensure the security of cargo ships taking grain from Ukrainian ports and so would "suspend its implementation from today for an indefinite period."

Russian officials said earlier Saturday that 16 drones had attacked Russia's Black Sea Fleet, damaging at least one vessel, a minesweeper, before all of the attacking aircraft were repelled. The Russian Defense Ministry accused "the Kyiv regime" of carrying out the operation but did not initially mention any civilian vessels.

The Black Sea Fleet has released devastating volleys of ship-fired missiles across the breadth of Ukraine, carrying out some of the deadliest strikes of the war.

Ukrainian officials did not comment publicly on the attack and have maintained a policy of official ambiguity about strikes behind the front lines.

But a senior Ukrainian official said the minesweeper Ivan Golubtsov had been severely damaged, possibly beyond repair. A second ship, Admiral Makarov, sustained damage to the hull that could easily be fixed, the official said.

The attack appeared to be the most recent example of Ukrainian forces striking sensitive Russian sites from afar, illustrating how homemade drones and powerful weapons provided by Western nations have given the Ukrainians abilities that only the Russians had early in the war.

Along the front lines in southern Ukraine, precision-guided rockets and artillery shells now give Ukrainian forces superior range and accuracy, commanders and military analysts say, because of weapons largely lacking in Russia's arsenal. Ukrainian soldiers are blowing up Russian armored vehicles worth millions of dollars with cheap homemade drones and more advanced drones and other weapons provided by the United States and other allies.

The grain deal, which was brokered by the United Nations and Turkey in July, was hailed as a diplomatic breakthrough, although its implementation remained shaky and Russian officials complained that they were not getting their due from the agreement.

The deal allowed commercial vessels carrying agricultural products to leave Ukraine and cross the Black Sea to Turkey, where their cargo would be inspected by a joint command including officials from Ukraine, Russia, Turkey and the United Nations.

As of Thursday, 9.2 million tons of grain and other foodstuffs had been exported through the deal, according to the office overseeing its implementation. On Friday, six vessels left Ukrainian ports carrying more than 220,000 tons of grain bound for Israel, Belgium, China, Italy and Egypt.

Ukraine and Russia are struggling to find storage for bumper crops of grain, a problem that stopping exports would exacerbate.

But Russia has struggled to export agricultural products and fertilizer as it is permitted to under the agreement because ports, insurers, banks and other businesses fear being punished for working with Russian exports, despite guarantees in the deal that they would not.

In September, Russian President Vladimir Putin floated the idea of limiting the deal, saying that the goods went to the European Union rather than to poor countries experiencing dire food shortages.

"The fact that grain shipments are going to the countries that implement these sanctions [against Moscow] disturbs Mr. Putin. We also want grain shipments to start from Russia," Erdogan said at a news conference. "The grain that comes as part of this grain deal unfortunately goes to rich countries, not to poor countries."

Putin has complained that grain was not being shipped to where it was supposed to go, but the original deal did not specify destinations, Russian policy analyst Alexandra Prokopenko wrote last month for the Carnegie Endowment for International Peace.

Rather, driving up grain prices would further fuel inflation in Europe, already staggering under the price of gas, and hence create pressure on Western governments, she wrote.

In a Saturday tweet, Ukrainian Foreign Minister Dmytro Kuleba said Moscow was using a "false pretext" to stop Ukraine from exporting its grain and other agricultural products.

"We have warned of Russia's plans to ruin the Black Sea Grain Initiative," Kuleba wrote. He also called on the world community to "demand Russia to stop its hunger games and recommit to its obligations."

The head of the Ukrainian presidential administration, Andriy Yermak, said Moscow was engaged in "blackmail" using food products, energy, and nuclear materials, which he described as "primitive."

Saturday's drone attack struck Sevastopol, a port on the Crimean Peninsula, which has been under Kremlin control since Moscow illegally annexed it in 2014.

The area holds immense symbolic importance for Putin. An explosion this month on the bridge linking the peninsula to Russia prompted Putin to retaliate with mass strikes across Ukraine that killed dozens of people and targeted critical infrastructure.

Russia's Foreign Ministry accused British specialists of being involved Saturday in the alleged attack by drones on Russian ships in Crimea. Britain's Defense Ministry had no immediate comment on the claim.

Ukrainian officials have continued to accuse Russian forces of harsh treatment of local populations in occupied parts of southern and eastern Ukraine.

Russian troops moved large numbers of sick and wounded comrades from hospitals in Ukraine's southern Kherson region and stripped the facilities of medical equipment, Ukrainian officials said as their forces fought to retake the province.

"Russia is turning the Kherson region into a zone without civilization," Zelenskyy said Friday in his nightly address to the nation. "They are dismantling the entire health care system there. ... The occupiers have decided to close medical institutions in the cities, take away equipment, ambulances -- just everything."

His stark portrayal of the conditions in the city, the first major city to fall to the Russians after their invasion of the country in February, came as Ukrainian forces advanced on Kherson from multiple directions and as the proxy officials Russia had put in place to administer the area were fleeing east to territory more firmly under Russian control.

Those officials have said they "evacuated" tens of thousands of civilians, but they have provided no evidence to support those claims.

"The so-called evacuation of invaders from the temporarily occupied territory of the Kherson region, including from medical institutions, continues," the General Staff of the Armed Forces of Ukraine said.

Ukrainians, on the other hand, accuse the Russians of carrying out Soviet-style forced deportations, such as those that have been documented in places like Mariupol that fell under Russian control.

It is increasingly difficult to reach people in Kherson, with phone and internet services unreliable and some residents saying Russian forces have searched people's cellphones for suspect communications.

Oleksandr, 50, said in a message shared Saturday with The New York Times that his wife had seen men at the hospital Friday turning off the heat and packing up "all worthy medical equipment" before ordering patients to leave.

"They are closing the regional hospital in Kherson," Oleksandr said, providing only his first name for fear of retribution. "Patients, irrespective of their condition, are sent home, even if they had surgery yesterday."

As Kyiv's forces sought gains in the south, Russia kept up its shelling and missile attacks in the country's east. Three more civilians died and eight more were wounded in the Donetsk region, a front-line hotspot as Russian soldiers try to capture the city of Bakhmut, an important target in Russia's stalled eastern offensive.

As the fighting continues, Ukrainian officials are struggling with a different type of battle: trying to provide electricity.

Dozens of aerial attacks on Oct. 10 and the days after it have destroyed 30% of the nation's power stations. In the weeks since, Ukrainian electrical workers have been racing to make repairs, but it is a monumental challenge.

Zelenskyy said Friday that 4 million Ukrainians faced restrictions on power use and that people across the country struggled with rolling power outages that he said were the only way the country's energy provider could prevent a "complete blackout."

In an interview, Volodymyr Kudrytskyi, CEO of Ukrenergo, Ukraine's national electric utility, described a sustained campaign of drone strikes that Russian officials have said is meant to cause civilian suffering and force Ukraine to submit to the Kremlin's will.

"Virtually every day, they hit some target run by Ukrenergo," he said.

More than 5,500 electrical maintenance workers are struggling to make repairs as quickly as they can under harrowing conditions, Kudrytskyi said.

Dmitry Medvedev, a former Russian president and prime minister and the current deputy head of Russia's Security Council, said in a statement Friday that Ukraine would regain energy stability only when it recognized Russia's demands as legitimate.

But Ukraine remained defiant. "We are not afraid of the dark," Zelenskyy said to the nation from the darkened streets of Kyiv late Thursday.

In other developments, 50 Ukrainian soldiers, including two former defenders of the Azovstal steel plant in Mariupol and two civilians,9 were released Saturday as part of a swap with Russia. Russia received 50 Russian soldiers.

Information for this article was contributed by Marc Santora of The New York Times, Mary Ilyushina and David Stern of The Washington Post and by Andrew Meldrum of The Associated Press.