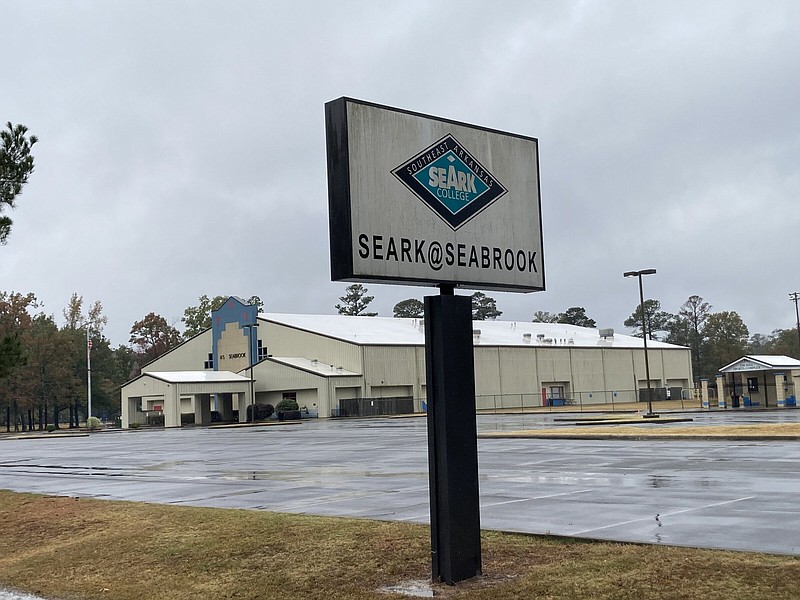 The Seabrook facility on South Hazel Street would serve as a shelter if one is needed, county officials say. (Pine Bluff Commercial/Byron Tate)

Had the circumstances been more dire from last week’s wildfires, Jefferson County officials said they were ready to open a shelter.

County Judge Gerald Robinson said his “eyes and ears” include Karen Blevins, director of the Office of Emergency Management, and the state Agriculture Department’s Forestry Division. Had they recommended taking action, Robinson said he was prepared.

“I was ready to make that declaration had they given me the word,” he said.

Part of that declaration could have triggered the opening of a shelter at the Seabrook facility on South Hazel Street. The facility, which is operated by Southeast Arkansas College and has a large gymnasium, could accommodate several hundred people if necessary, Robinson said. Turning the facility into a shelter would have been aided by the Red Cross, which would have brought in cots, food and water.

Robinson said his initial order would be given orally, which would have been followed by a written order within five days so the county could get assistance from the federal government, if necessary.

“So this could all happen very quickly,” he said, adding that, during his decades in county government, both in the sheriff’s office where he worked and also served as sheriff, and his time now as county judge, he has been involved in several emergency situations.

“I don’t have to say, “What do I do?’” he said. “I pop into action. We have people in place who know what to do and they’re doing it.” Robinson said he also works with Mayor Shirley Washington, if necessary, “to establish a place for the displaced to go,” and he works with volunteer fire departments in case those agencies’ facilities are needed by the public as places to take shelter. Several fires broke out last week in south Jefferson County, caused, according to fire officials, by people burning trash. The county has been under a burn ban for several weeks because conditions are extremely dry. Making matters worse was the fact that, on the days when the trash was burned, winds gusted up to 30 mph, which quickly spread the blazes.

Even a brief rain in midweek didn’t help as fires that had been under control reignited and again had to be fought. Numerous fire departments from around southeast Arkansas, Forestry Division service crews and equipment, including their fire-suppression airplanes, and equipment from Jefferson County and other counties were brought together to fight the blazes.

Blevins said that, during the fires, she and her staff were monitoring social media to gauge how serious the situation was for the families living in the affected areas. During the fires, some families were encouraged to leave their homes, and in a few cases, evacuations were called for, but few people left, officials said.

“We take our cues from the public,” Blevins said. “There were not that many houses affected, and most people have relatives in the area where they could go if they had left their homes.” Had more families been affected, however, Blevins said she was ready to alert Robinson that the situation had become critical.

“At one point, we contacted the Red Cross and talked with them,” Blevins said. “We wanted to make sure we were on the same page in case their services were needed.” Even though the Seabrook shelter was never officially opened, Blevins said SEARK “took it upon themselves” and opened the facility – just in case it was needed.

“It wasn’t officially a shelter,” she said. “It was more of a reception area, someplace where people could go to regroup. As it turned out, no one used it.” No one was hurt in the fires and no structures were lost, although the fires came dangerously close to a few houses, Robinson said.

“In a few places, the fires got to within 40 to 70 yards from some homes,” he said. “We were able to save the homes because of the fire breaks that had been created with the fire dozers that we and other agencies brought in.” Robinson, like other fire officials, said he was appalled that someone would purposely start a fire under such conditions.

“This is the thing,” he said. “That was absolutely ludicrous. We have posted ‘burn ban’ signs everywhere, and a burn ban is still in effect. This is the driest it’s been in a long time. It was just stupid to start a fire.” Even if the fires didn’t harm anyone or any structure, Robinson said there has been a significant cost both in fighting the blazes and in the loss of timber and wildlife habitat.

“I’m just happy there was no loss of life and no property damage,” Robinson said. “But the overall damage has not been assessed. Trust me, there has been property loss.”