With two months left in the year, Little Rock poised to set a homicide record 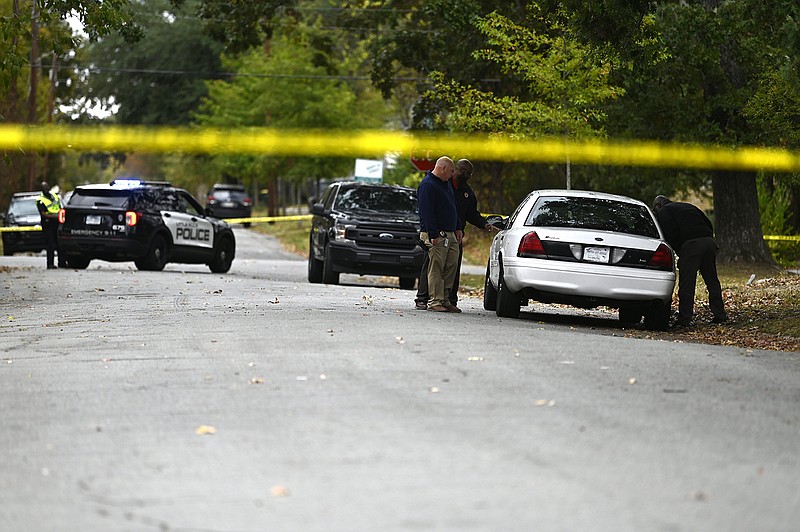 Police investigate a homicide in the 2100 block of West 18th street in Little Rock on Tuesday, Oct. 25, 2022. (Arkansas Democrat-Gazette/Stephen Swofford)

The number of people killed in Little Rock exceeded the city's 2021 homicide toll this month, reaching 69 last week and leaving the possibility that the number of deaths will by year's end reach the deadly high of 76 recorded in 1993, when the city was embroiled in gang-and-drug-related violence.

Police say that the causes of today's killings tend to be more complex than they were in the '90s, making it harder for one strategy to encompass the entire problem. At the same time, Mayor Frank Scott Jr. has spent millions of dollars on long-term preventive programs that aim to change the way teens and young adults think about conflict, but may not bring immediate relief. Another community activist called on the governor to intervene and has been disappointed in the results.

However, 2022's deaths have passed both tallies, and with at least four Little Rock homicides reported in each month of 2022 so far, the record high recorded nearly three decades ago looks closer and closer.

What's changed since then is the causes for the shootings, Little Rock police Maj. Casey Clark said.

Clark, a 27-year department veteran who remembers well the '90s homicides, said that while almost all of those killings stemmed from conflicts over drugs or gang territory, today's killings happen for less clear-cut reasons.

"There's not one particular thing that we can identify that has brought this increase that we've seen," Clark said.

Some killings are the result of domestic disturbances between romantic partners, but many seem to be retaliation over disagreements and insults, some of which originated on social media, Clark said.

"They take the first opportunity when they see them to try to strike back," Clark said.

The influence of social media is hard to overstate, Clark and department spokesman Mark Edwards agreed.

"You're just dealing with a different generation," said Edwards, who also lived in Little Rock in the '90s.

Combating gangs and drug sales were the effective ways to combat violent crime in those days, but since homicides in recent years aren't necessarily tied to known gangs or drug trafficking, it's hard to find a solution, Clark said.

"Now things are a lot more disjointed, a lot more transient," he said.

The one main similarity between the killings now and those of 30 years ago is that they're almost never random, Clark said. The victim and suspect practically always know each other.

Only one killing so far in 2022, the Aug. 14 slaying of Brandon Mackintrush, 20, is what police would consider random, Clark said. The shooting suspect, Davis Lamont Jones, Jr., 31, does not appear to have ever met the man he is charged with killing, Clark said.

From 1990 to present, the average number of homicides in Little Rock each year was about 44, a toll the city has passed in 2020, 2021 and this year. Last year's 65 reported homicides was the first time more than 60 homicides had been reported since 1993.

When contacted for comment from Scott on the city's homicide death toll, the mayor's communication director Aaron Sadler provided a statement via email saying that the mayor's office is "deeply concerned" by the homicide rate.

"The disheartening trend of higher homicide numbers is occurring across the country, and it's been attributed to factors such as socioeconomic conditions and easier access to guns," Sadler wrote.

No matter what the reason, Sadler said that Scott and his administration have focused on supporting the city's police as they use targeted patrols and the camera footage of the Real-Time Crime Center to respond to violent crime while simultaneously spending millions of dollars on prevention, intervention and treatment programs meant for children and young adults.

Little Rock is not the only city seeing increased crime, data shows, but because of its larger population, the difference is more stark.

So far this year, records provided by North Little Rock police showed 15 homicide deaths. That exceeded records compiled by the Arkansas Democrat-Gazette, which showed 12 homicides by the end of October.

At the Pulaski County sheriff's office, spokesman Lt. Cody Burk said he couldn't immediately provide homicide totals before 2000, but the agency has not had more than 10 since that date.

However, Burk recalled one year in the '90s when deputies investigated 18 homicide deaths, which he called "unreal" compared with their usual numbers.

Benny Johnson, who founded Arkansas Stop the Violence in 1981, thinks the only way to see the city end the wave of killings is through active partnership between police, city officials and church leaders, he said.

But Johnson doesn't think that churches have been doing their part lately, and he'd like to see them opening their doors to the community and teaching young adults in the skills that would keep them from turning to crime.

Johnson this year has written two letters to Gov. Asa Hutchinson, asking him to get more federal help from the Bureau of Alcohol, Tobacco, Firearms and Explosives in getting illegal weapons off the streets and out of the hands of criminals, he said, but called the response lackluster.

"He appears that he's not concerned," Johnson said.

Although Little Rock police have always done fairly well seizing guns from those who shouldn't legally have them, Johnson thinks that increased ATF presence would make a notable difference on the streets of Little Rock, he said.

When it comes to deterring crime, increased police presence is still employed in high-crime areas, Clark said, but in general it's not as effective as it was in the '90s, when gang turf contributed to homicides.

"That's not really what we're seeing now," Clark said, although "it does work in those pockets," where crime is more frequently reported.

Edwards said he thinks the solution to the homicide problem in the city is more likely to come from better communication and cooler heads. That's not necessarily something the police can change directly.

"You gotta be able to resolve conflict without resorting to violence," Edwards said.