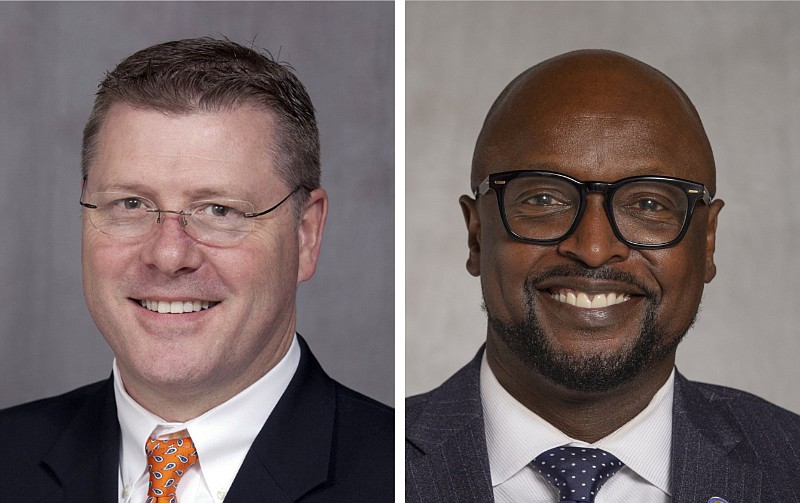 After redistricting in 2021, Arkansas' sprawling 1st Congressional District includes all of 30 counties and part of Pulaski County. The district covers much of east Arkansas, stretching from Louisiana in the south to Missouri in the north, while also bordering on Mississippi and Tennessee. Arkansas' 1st District includes almost all of the Delta region and a substantial part of the Ozark Mountains.

It's a lot of territory to cover on the campaign trail.

Raised in a U.S. Air Force family, Crawford has lived all over the United States and in England, according to https://crawford.house.gov/about-rick. He enlisted in the U.S. Army straight out of high school and served as an explosive ordnance disposal technician.

Crawford has a degree in agriculture business and economics from Arkansas State University in Jonesboro.

Throughout college, Crawford competed in rodeos across the country until he was thrown by a horse named Tombstone. While recovering from that career-ending back injury, Crawford discovered a talent for announcing and producing rodeos, according to his website.

"He became a freelance rodeo announcer and producer after completing his bachelor's degree, which led to a career in agri-news reporting and broadcasting," according to his biography. "He founded and operated the AgWatch Network -- a web-based farm news content provider serving more than 50 radio station affiliates in five states."

Crawford also served as marketing manager for one of the largest John Deere dealer groups in North America, according to his biography.

In Congress, Crawford is a member of the House Agriculture Committee, "having played a critical role in passing two farm bills, having served on the Conference Committees in 2014 and 2018," according to his website.

Hodges, 50, of Blytheville, has been a state representative since 2013. He's the Democratic Party nominee in the congressional race.

Hodges, an ordained minister, grew up in Blytheville. He earned a bachelor's degree in business administration, economics and finance from Arkansas State University in Jonesboro, according to https://monteforcongress.org/about-monte.

He is senior vice president of commercial lending at Southern Bancorp, which was founded to help strengthen underserved communities through financial access and investment.

Hodges served nine years in the military. Prior to being elected to a seat in the state House, he served on the Blytheville City Council.

For the 93rd General Assembly, Hodges serves on the Joint Budget Committee, Joint Committee on Energy, the House Insurance and Commerce Committee, and the House Revenue and Taxation Committee, according to https://www.arkansashouse.org/district/55.

"In 2016, Monte was one of 25 minority elected official selected from southern states to participate in The Roundtable of the South in Washington, DC, sponsored by the Joint Center for Political and Economic Studies," according to his campaign website. "Monte was selected in 2019 as one of 20 leaders from across the country to join the New DEAL (Developing Exceptional American Leaders), a selective national network of state and local elected officials."

President Joe Biden campaigned on overturning almost all of his predecessor's immigration policies. In its first few months, his administration took dozens of actions, but his efforts collided with a dramatic rise in migration to the southern U.S. border, according to the Council on Foreign Relations, an independent, nonpartisan think tank.

"Biden's steps to undo Trump-era policies have included reducing immigration enforcement inside the United States, ending the travel bans, lifting the suspension of green card processing, and halting construction of the wall along the U.S.-Mexico border," according to the Council on Foreign Relations.

"We've seen that the president, obviously politically motivated, has vacated every position of the previous administration from Day 1, and the result has been just bedlam on the border," said Crawford.

"I think the position of the administration right now is doing a huge disservice to those immigrants that came here, did it right, waited for years to follow the rules, and for those who now are currently waiting to do it right and follow the rules," he said.

"In the big picture, America is a family, and that's our door," he said of the southern border. "We need to lock our doors to protect the people on the inside. There will be times when people knock on the door, and you open it up and say, 'Yeah, you can come in,' or 'No, you can't.' But there's an appropriate way to enter the country just like there's an appropriate way to enter someone's home."

He said that doesn't mean a person or policy is racist.

"That's flat-out false," he said. "In fact, we're seeing huge numbers of Hispanics that are gravitating toward the Republican party for that very reason."

Crawford said construction needs to continue on the wall along the southern border.

"President Biden didn't have a bit of a problem building a wall around the three estates he owns in Delaware for his personal protection," Crawford said. "But he doesn't care about the personal protection of the country writ large."

"Comments like that are comical to me, quite frankly," Hodges said. "I listen to a lot of Crawford's messaging. His talk is always geared toward the Biden administration, toward the Democrats. Of course, we want secure borders. That's a no-brainer. We want to protect our country and ensure that our borders are safe. ... I know that these are national issues, and they're national issues that need to be addressed. Everybody has to come to the table and put their heads together to do what's best for our country.

"My thing is, we're talking about border protection and immigration and things of that nature when you have food deserts in your own district," said Hodges. "When you have horrible, crumbling roads, Third World roads in your own backyard. Yes, we need to focus on national security, national issues, but yet we need to take care of home as well.

"What is happening is the 1st District has been neglected. I have to take care of my home before I can take care of anything else. We have people in the 1st Congressional District, as I travel these 31 counties, that are destitute, that are wanting a good job."

People want to be able to afford their medication, said Hodges. He said pockets of the 1st District need internet and rural broadband service.

Hodges said his focus is on those issues within the 1st District, "the needs of the people right here in our backyards."

"The building of the wall, to be honest with you, is not a priority," he said.

Crawford said he also travels the congressional district. He tries to meet periodically with county judges, sheriffs and mayors.

Hodges said the 1st Congressional District as a whole hasn't fared as well economically under Crawford.

"He may be a nice guy, I don't know, but he has done nothing for the 1st Congressional District," Hodges said of Crawford.

"It's absolutely stunning to hear a candidate for federal office dismissive of finding new markets for our agriculture and manufacturing sectors, and blocking illegal border crossings, which protects our nation from terrorists, fentanyl and sex traffickers," Crawford said. "However, he and I do agree on the importance of infrastructure, which is why I've worked across the aisle to pass two farm bills and three highway bills. Mr. Hodges, on the other hand, continues to embrace the disastrous policies of the current administration. In sharp contrast, I recognize that Bidenomics has been disastrous for Arkansans and I will continue to fight against it."

"That really set the stage for what we're experiencing now," he said.

U.S. House elections occur every other year. Members of Congress are paid $174,000 per year. The general election is Nov. 8.