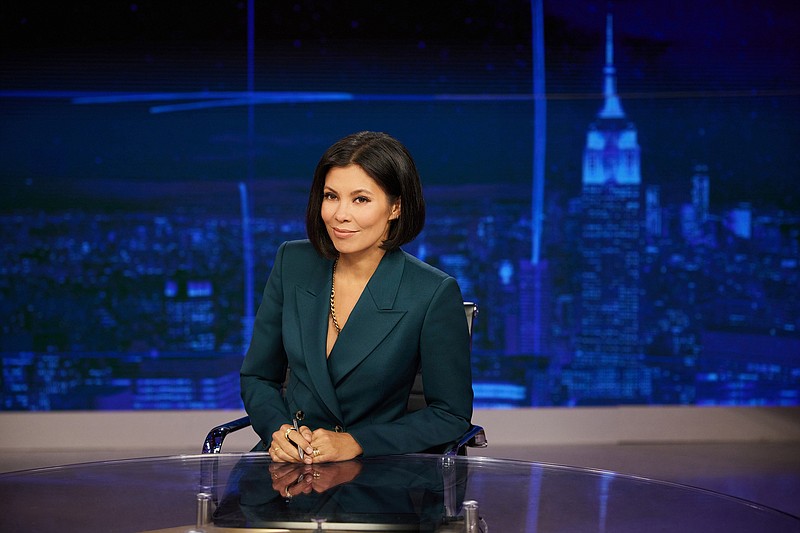 Alex Wagner poses on the set at MSNBC. She has her hands full trying to measure up to Rachel Maddow's ratings in her former time slot. (MSNBC/Patrick Randak)

For nearly 14 years, MSNBC viewers counted on seeing Rachel Maddow every weekday night at 8 p.m. CDT to interpret the day's top stories in her professorial style, marked by lengthy monologues and provocative dot-connecting.

Since May, though, the TV personality has been a merely once-a-week presence, thanks to a lucrative deal that keeps Maddow within the MSNBC stable while allowing her to work on other projects.

Now, Alex Wagner has begun hosting the other four nights a week of Maddow's old shift, ushering in a highly experimental new era for one of the most pivotal time slots in cable news.

For the four years of the Trump administration, the 8 p.m. CDT hour was a slugfest between Maddow, Sean Hannity on Fox News, and Chris Cuomo on CNN. But Hannity is now overshadowed in the ratings by Fox's 7 p.m. host, Tucker Carlson, and CNN still has not named a permanent 8 p.m. host since firing Cuomo in December.

Theoretically, that makes this an opportune moment for MSNBC to seize attention with Wagner, 44, who, after stints with CBS News and Showtime's political series "The Circus," is returning to the network where she spent 2011 to 2015 hosting a show in the lower-profile afternoon hours.

Yet to break through in this competitive climate, she will essentially have to become "a brand," argues industry analyst Brad Adgate, whom viewers will want to watch regardless of what is happening in the news cycle.

Wagner said she has been grateful for her new bosses' patience. "MSNBC has given me a lot of support to craft an hour of television that is reflective of my experience as a journalist, my values as a journalist and my personality," she said, "and that's all you can ask for."

MSNBC President Rashida Jones, who picked Wagner for the show after a stint as a contributor and fill-in anchor, said she's not expecting her to replicate the audience of Maddow, who drew 3.4 million viewers on an average night in 2020 — at least not at the beginning.

"We're giving her the time and space to grow," Jones said. "This is a long investment because I think Alex is incredibly talented."

Though Wagner leans left on many issues, she told The Post that viewers should not expect to "get preprogrammed Democratic talking points at the [8 p.m.] hour."

Political consultant Mark McKinnon, who co-created and co-stars in "The Circus," called Wagner "a monster talent" that he fully expected would leave his show for "bigger and better things" — and possibly bring something new to an increasingly "stale" cable news format.

"The sort of constant echo chamber of breaking news is now everywhere," he said. "In order to kind of break out and break through, I think people will be looking to bend the format, and Alex is well-suited for that." Wagner cited their work on "The Circus" as a possible inspiration, saying she hopes to have fewer panels and more segments shot out in the field — though she acknowledged "there's only so much reinvention you can do of this particular wheel." She will, after all, be sitting at a desk.

When asked about her desired guests, Wagner mentioned Sen. Kyrsten Sinema, D-Ariz., and former House speaker John Boehner, R-Ohio. "I feel confident that you are not going to feel that this is a horse-race politics show at [8 p.m.]," she said.

Despite a long-running decline in the number of people who pay for a cable news package, with many viewers pivoting to streaming video, Wagner insisted she's "not at all downcast" about the future of cable news. "The urgency of the moment demands an institution like cable news to respond," she added.

Yet she is hoping some Maddow loyalists will give her a chance when they find her in their heroine's chair on Tuesdays through Fridays. "I really hope Rachel's admirers come and stay through the rest of the week," she said. "We're going to work really hard to get a lot of people to watch the show."