Sauteed mushrooms and onions and brown gravy top the Smothered Hamburger Steak (clockwise from down center), with side mac & cheese, a tossed side salad and a cup of balsamic vinaigrette. (Arkansas Democrat-Gazette/Eric E. Harrison)

It took months and months — with innumerable delays — but Homer’s earlier this summer finally completed its 14-block move west on North Rodney Road into much of what used to be Franke’s Cafeteria, marking its full conversion from Homer’s West to Homer’s Kitchen Table.

One of the hardest things about dining at Homer’s Kitchen Table, however, is getting a lunchtime dining-room table. It was even harder than finding a parking space.

We made two attempts to lunch there, and both times were faced with half-hour-minimum waits.

That first time, as we turned away from the front door and the line of waiting customers, we discovered there was a separate door on the side for takeout orders, so we placed an order to go there and took our food back to the office.

The second time, we took a colleague’s advice and got a seat at the bar, at which you can get full service.

The third time, we decided to be extra smart and showed up at 3:30 p.m., long after the lunch rush and, by our calculations, early enough to beat the early birds. We outsmarted ourselves: The place was practically empty. Plenty of tables to choose from, yes, indeed.

The biggest advantage of the new location, in addition to more dining room space — did we mention the place nevertheless still packs out at lunch? — is a bigger kitchen, which will allow for a slightly expanded menu, including a wider possible range of desserts.

Let us confirm that these folks are no beginners when it comes to home cooking. The original Homer’s on Roosevelt Road has been serving it up successfully for decades, and Homer’s West had been doing a pretty darn good job of it since it opened in 2012. You also can still get an enormous amount of food for a quite reasonable price.

Considering that the move and conversion took place in the depths of a pandemic, however, we could have hoped for better social distancing in the new dining room.

Once we had backed away from the half-hour wait — not everybody, as we have noted in other contexts, has that long a lunch break — the sheer number of people, crammed into the entranceway while waiting for tables, or sitting cheek-by-unmasked-jowl in the dining areas, spooked Intrepid Companion, to the point where she refused to accompany us on subsequent visits. Sigh.

Aside from the proximity of other diners, however, the space is pleasant, with wood-topped tables and comfortable wooden seats. In lieu of artwork on the walls, there are at least eight large-screen TVs mostly airing (muted) sports programming. We only heard the classic-rock soundtrack on our third visit, when it wasn’t being drowned out by the volume of human voices and clashing plates.

Second time in, we took a seat at the end of the bar, sufficiently distant from the nearest patron and with a chair next to us that remained vacant until just before we were ready to leave.

It had been long enough since our last visit to the old Homer’s that we did not remember that, for some reason, the kitchen concentrates to Thursdays all its best specials — chicken and dumplings, chicken and dressing, honey-glazed ham and Homer’s Tamale Platter. A choice so tough we didn’t really do more than glance at the menu.

Homer’s chicken and dumplings ($12) is pretty soupy — more like chicken soup with dumplings than its usual preparation around here (in a starchy white gravy); it was tasty, though, and chock- full of shredded white and dark meat and the pasta-like dumplings were cut into easily mouth-accessible pieces. It came with two sides; we opted for the sweet kernel corn and some distinctly — and unexpectedly — sharp mac & cheese. 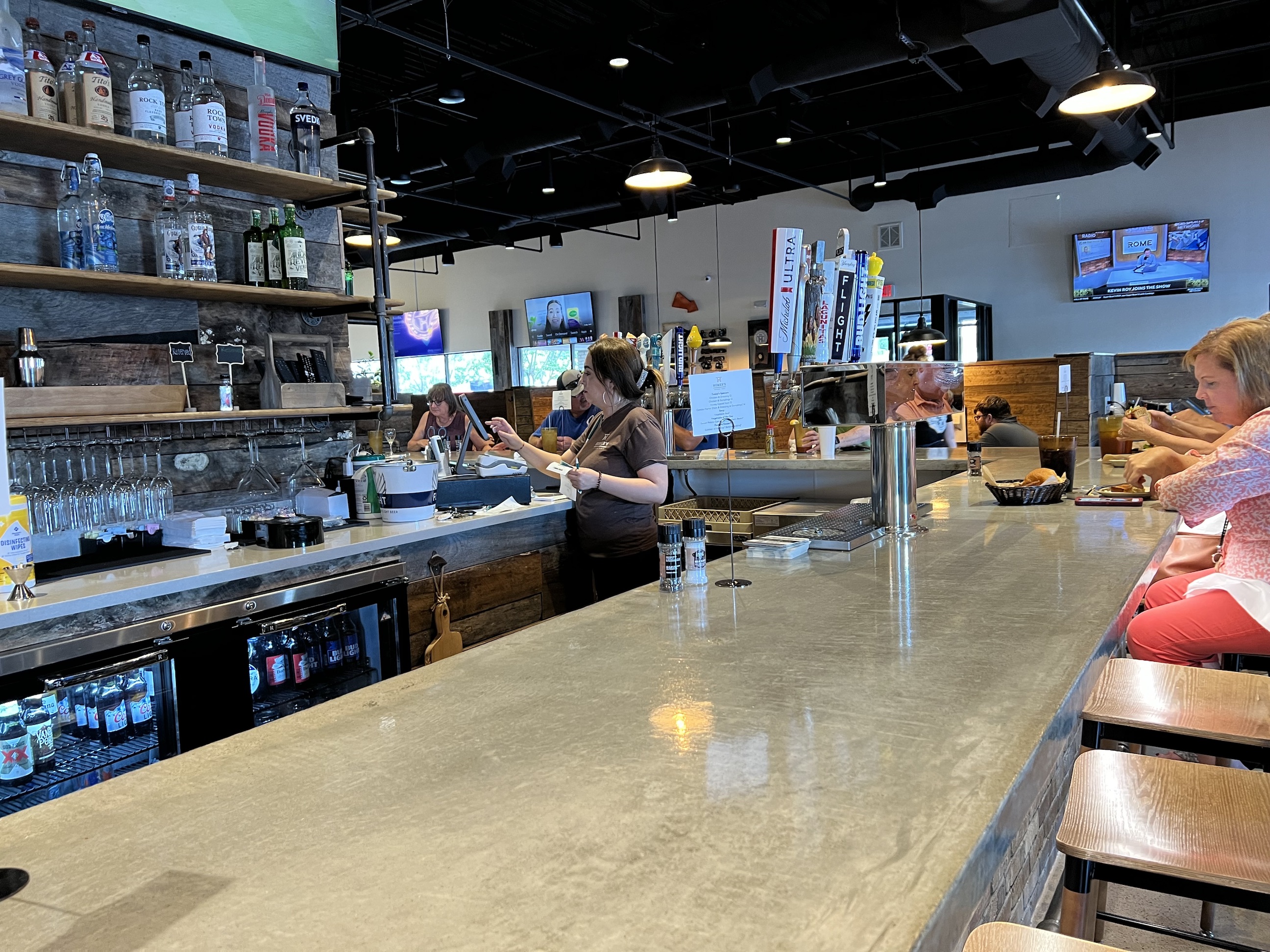 Full meal service is available at the bar, nice to have when the restaurant is packed and there's a wait for tables. (Arkansas Democrat-Gazette/Eric E. Harrison)
We also, based on some raves we’d been seeing on social media, ordered the fried pickles ($9) off the starters menu, available not just as slices but as six large spears. They were piping hot out right out of the fryer — hard as that’s going to be, you should let them cool for a few minutes to avoid painful mouth burns. But they were delicious, and, since we weren’t able to finish them before our entree arrived, we took half of them home and we may have enjoyed them even better as cold leftovers.

We relied on the menu for our early-bird adventure, and, as we were leaning in that direction already, took the server’s recommendation of the Smothered Hamburger Steak ($12), a half-pound of grilled ground beef topped with a brown gravy and sauteed mushrooms and onions. The onions weren’t sauteed as much as we would perhaps have liked them — they weren’t raw, but they were still a bit crunchy and, well, onion-y, but overall we made short work of it all.

On the side we went for a tossed salad of mostly iceberg lettuce but with some other greens — was that a leaf of baby spinach? — plus chopped tomatoes and some crisp house-made croutons. The cup of our dressing choice — balsamic vinaigrette — came on the side so we could add as we desired. (The dressing, which was almost the same exact color as the gravy, spilled a little, creating a very interesting flavor combination into which we dipped the massive fluffy yeast roll that came gratis with the meal.) Our revisit to the mac & cheese, however, was disappointing: the cheese sauce didn’t have nearly the same kick the second time around.

We recollected, perhaps incorrectly, but (possibly incorrectly) confirmed by the server, that yes, Homer’s made its own lemonade. But based on the slightly chemical taste, we’re pretty sure the large plastic vessel ($3) he brought to our table contained the Minute Maid stuff out of the dispenser. Bleah.

We yielded to the server’s move to upsell us on the day-special banana pudding — $6, which seemed pretty pricey, but it turned out to be a massive amount of pudding, sliced bananas, vanilla wafers (top and bottom) and whipped cream, all served in a mason jar.

For our to-go order, we took away a Patty Melt ($11), a half-pound of ground beef with sauteed onions, mustard and Swiss cheese on grilled rye (since we consider mayonnaise on red meat to be heretical, we had them hold the mayo). It was a bit greasy to the touch but it was a real taste treat, and it came with a big pile of crispy house-made chips.

Service was universally good, at dinner partially because our server had no other tables to cover, and at lunch possibly, in part, because the wait staff included two “refugees” we know who worked at the late, lamented Cathead Diner.