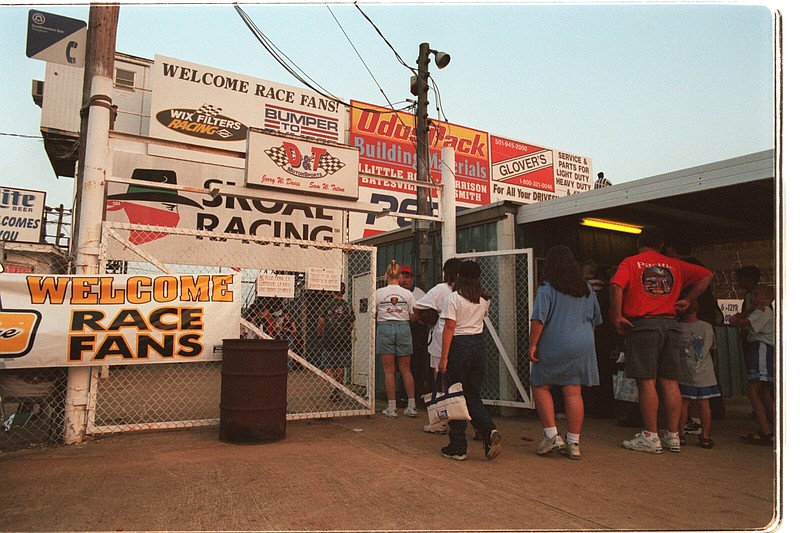 FILE — Fans file into the front gates for an event at Little Rock’s I-30 Speedway in 1998. The quarter-mile, high-banked dirt oval, in its 66th year of operation, appears set for development and is expected to close permanently after this season. (Democrat-Gazette file photo)

This season at Little Rock's I-30 Speedway, its 66th year in operation, will be its last by all indications.

The high-banked quarter-mile oval, which started as a dusty bullring mostly for jalopies in the 1950s and evolved into one of the most renowned dirt tracks in the nation, appears set to be developed by Copart, Inc., a worldwide organization that specializes in the online auctions and sales of used, wholesale and salvage title automobiles.

Clay Family, LLC, the owner of the facility, was granted a rezoning request without opposition at a meeting of the Little Rock Board of Directors on Aug. 16. The property's new zoning is C4, which allows for the storage, sales and open display of vehicles and machinery.

In the ordinance, developers of the property are listed as Copart, Inc. and Steve Powers, a CEO of the Dallas-based company, in care of GarNat Engineering of Bryant.

Tracey Clay and her father Joe Clay are owners of the facility.

According to an real estate listing online, the track sits on 66.02 acres, most which is a wooded area beyond the pit area off the backstretch of the track. In addition to the track, there is a restaurant on the north end of the parking lot, several buildings for offices and concession stands and bleachers for about 3,800. The asking price on the listing was $7.33 million.

The track is still in operation with racing each Saturday night. It is closed this weekend for the Labor Day holiday, but will resume Sept. 10 for the Ralph Henson Tribute sprint car event.

The final race listed on the track calendar for this season is its premier event, the 35th annual Comp Cams Short Track Nationals, one of the nation's most prestigious sprint car races. It will be held Sept. 30-Oct. 1.

Copart, founded in 1982, is a Fortune 500 company that is traded on the New York Stock Exchange. According to its website, it has more than 200 physical sites across the U.S. and 10 other countries with more than 10,000 acres vehicle inventory. It currently has two locations in Arkansas -- at Conway and Prairie Grove.

The track opened June 28, 1956, as the Benton Speedbowl and was originally located at the intersection of U.S. 67/70 and Alcoa Road in Saline County. In 1959, it moved to its current location, alongside Interstate 30 and just north of the border between Pulaski and Saline counties.

After going through several owners, Joe Clay -- who won several championships at the track as a sprint car driver -- purchased the track in 1987 with two partners, brothers Ron and Odus Pack. The track's name was changed to I-30 Speedway and Clay became the sole owner in 1990.

Operating in its eighth decade, the track has been a gathering spot for racers and fans on most Saturday nights between April and October for generations. On average racing nights, the track attracts between 80 and 120 cars in its pits.

Portions of "White Lightning," the 1973 film starring Burt Reynolds and Ned Beatty, were filmed at the track.

Many drivers who competed at I-30 have gone on to bigger professional careers. Batesville's Mark Martin, a winning NASCAR driver for more than 30 years, first raced at the Benton Speedbowl at age 15 and still holds a record at the track with 10 consecutive feature victories.

Texarkana 67 Speedway announced earlier this summer plans to close. It is not known if it will reopen.