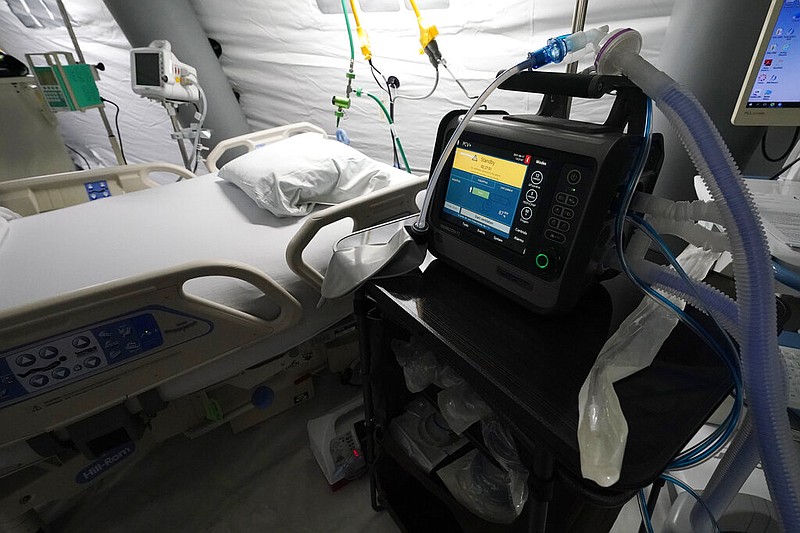 An uptick in Arkansas' new coronavirus cases resumed Thursday even as the number of people hospitalized with covid-19 fell by double digits, dropping below 300 for the first time in more than a week.

The state's death toll from the virus, as tracked by the Department of Health, rose by five, to 11,923.

One occurred in January, one was from June and three were from July, she said.

Meanwhile, McNeill said the state on Thursday -- a week earlier than state officials had initially expected -- received its first shipments of the updated vaccines from Pfizer and Moderna that were authorized by the U.S. Food and Drug Administration on Wednesday for use as booster doses.

McNeill said 900 doses of the Moderna vaccine arrived at the Health Department's Washington County Local Health Unit in Fayetteville, and 1,800 doses of Pfizer were delivered to Mercy Hospital Northwest Arkansas in Rogers.

The doses were among 24,900 doses of Pfizer and 21,500 of Moderna that the Health Department "pre-ordered" on Monday in advance of the vaccines' expected clearance by federal regulators this week.

In addition, McNeill said the department on Wednesday ordered an additional 2,100 doses of Pfizer that will go to the University of Arkansas for Medical Sciences.

U.S. Centers for Disease Control and Prevention Director Rochelle Walensky on Thursday evening endorsed an advisory committee's recommendations on the use of the updated vaccines, clearing the way for providers to begin administering them.

"The updated COVID-19 boosters are formulated to better protect against the most recently circulating COVID-19 variant," Walensky said in a statement.

"They can help restore protection that has waned since previous vaccination and were designed to provide broader protection against newer variants."

UAMS, which also requested 1,000 doses of the updated Moderna vaccine, plans to administer the boosters to patients at its outpatient clinics and to employees at its Student and Employee Health Services Clinic in Little Rock, spokeswoman Leslie Taylor said.

"We were determining how many doses we needed for student employee health as well as for our patients and we finalized that number on Tuesday," Taylor said.

"Patients can inquire about booster doses as they visit with their Mercy providers," Fortner said.

Arkansas' count of cases rose Thursday by 1,323 -- an increase that was larger by 143 than the one on Wednesday and by 131 than the rise the previous Thursday.

After not changing a day earlier, however, the number of covid-19 patients in the state's hospitals fell by 23, to 295.

State health officials have said the recent slight upward trend in the state's new case numbers, coinciding with the start of the 2022-23 school year, has been driven primarily by transmission among people 18 and younger.

Infections among children, who represent about 23% of the state's population, accounted for 33% of the cases added to the state's count on Thursday.

Health Department spokeswoman Meg Mirivel said in an email Thursday that new cases "appear to be plateauing" among children under age 12 but were still increasing among children and teenagers age 12-18.

"If this uptick behaves like the uptick last school year, it will likely be short-lived," Mirivel said.

"However, we will need to see what the data show in the next week or two to know for sure."

She said health officials would also be watching the data to see if the decline in the number hospitalized with covid-19 continues.

Children weren't the only ones affected by the recent uptick in transmission.

In an email newsletter on Wednesday, Little Rock Central High School Principal Nancy Rousseau said she had tested positive for covid-19 that morning and would be working from home until Tuesday.

"I made it through almost 3 years!," Rousseau said in the newsletter.

"I have been somewhat lackadaisical about keeping my mask on consistently since the students returned last week. I am not feeling great and frankly, you don't want this. I have had 4 shots which obviously didn't protect me from this variant. Please be careful - this is not fun."

After dipping a day earlier, the average daily increase in the state's case count over a rolling seven-day period rose to 984, its highest level since the week ending Aug. 5.

Growing for the third day in a row, the number of cases in the state that were considered active rose by 354, to 11,873, as new cases outpaced recoveries.

The number of the state's virus patients who were in intensive care, which fell the previous three days, rose Thursday by two, to 47.

The number on ventilators rose by three, to 14, after falling the previous two days.

At its hospitals in Little Rock and Springdale, Arkansas Children's had 23 covid-19 patients on Thursday, up from 16 on Wednesday and 14 the previous Thursday, spokeswoman Amanda Leech said.

Taylor said UAMS Medical Center in Little Rock had 14 covid-19 patients on Thursday, down from 17 a week earlier.

The patients on Thursday included one who was in intensive care, Taylor said. None of the patients were on ventilators.

Seven of the 14 patients had been fully vaccinated, Taylor said.

Reflecting increases in new cases, hospital admissions, or both, the number of Arkansas counties where the CDC recommends people wear masks in indoor public places rose Thursday by three, to 28, after falling by the same number a week earlier.

The recommendation applies to counties where the "covid-19 community level," based on the weekly number of new cases, hospital admissions for covid-19 and the percentage of of staffed hospital beds that are occupied by covid-19 patients, is "high."

Under the latest weekly update to a CDC map, the level rose from "low" to high in Desha and Jefferson counties and from "medium" to high in Bradley, Clay, Cleveland, Drew, Fulton, Izard, Lonoke and White counties.

Among the state's most populous counties, the covid-19 level remained medium in Pulaski, Sebastian and Saline counties, low in Benton County and high in Faulkner and Craighead counties.

In Washington County, the level rose from low to medium.

The percentage of Arkansans living in a county with a high covid-19 level rose from 23% under the previous weekly update to 29%.