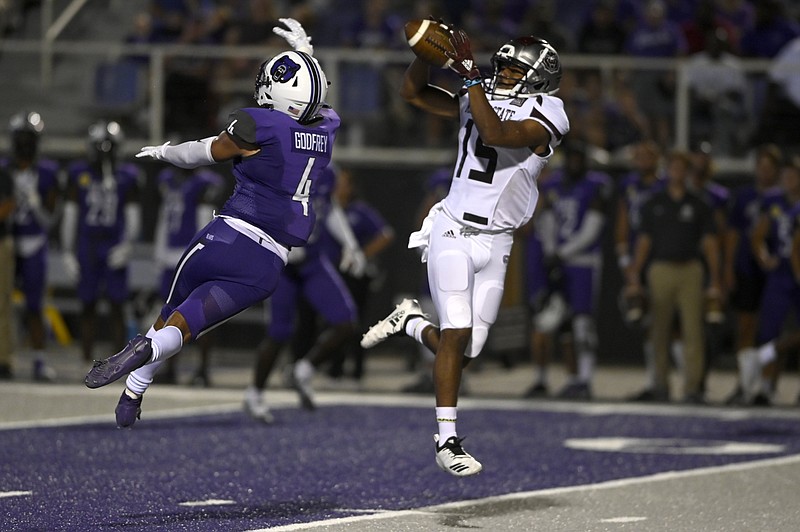 University of Central Arkansas safety Cameron Godfrey (left) tries to intercept a pass to Missouri State wide receiver Jahod Booker in the second quarter Thursday night in Conway. The Bears allowed 266 yards through the air in a 27-14 loss to open the season. More photos at arkansasonline.com/92UCA/ (Arkansas Democrat-Gazette/Stephen Swofford)

CONWAY -- It was always going to be an uphill battle for the University of Central Arkansas on Thursday night at Estes Stadium.

UCA played Missouri State — ranked No. 5 in the NCAA Football Championship Subdivision — to a scoreless first quarter, but allowed 17 points in the second quarter to fall behind heading into halftime.

UCA outscored Missouri State 14-13 in the second half but ultimately fell 27-14 in the season-opener for both teams.

“It’s big [to have kept the game close] because we know we can play with them,” UCA Coach Nathan Brown said. “That’s the sentiment in our locker room right now. It’s just frustration that the if ball bounces our way here or there … maybe it is a different game.”

Central Arkansas had success initially, forcing punts on Missouri State’s first three drives and a fumble on the fourth. But Shelley followed Jose Pizano’s 30-yard field goal with the 5:58 left in the half with a 5-yard touchdown run with 1:05 remaining and a 10-yard touchdown pass to Hunter Wood with 3 seconds left.

The three scores in the closing minutes of the first half gave Missouri State a 17-0 lead.

“Late in the first half killed us,” Brown said. “We played such a great first 20 minutes in the ballgame that we just let the momentum get away from us. And they capitalized which is what good teams do.”

Brown and defensive coordinator Matt Kitchens stressed throughout the offseason that one of the main areas of need for UCA was the defensive front. They felt if the defensive line could have a greater presence and get to opposing quarterbacks, the Bears would have success.

Led by Southern Arkansas University transfer David Walker, the defensive line routinely shed blocks and stopped most rushing attempts by Missouri State in their tracks. Running back Jahod Booker was held to 44 yards and less than 3 yards per carry.

“I don’t think there’s any doubt you can tell a difference comparative to last year,” Brown said. “Our defense did a great job of it and got Shelley off the mark most of the night. He was never fully comfortable back there, I don’t think”

The second half brought more success for UCA, but self-inflicted wounds stopped any meaningful comeback.

UCA’s first drive out of the half ended with kicker Hayden Ray missing his second field goal of the game — this one from 22 yards. Central Arkansas’ defense forced a punt on Missouri State’s ensuing drive to set up what proved to be the Bears’ most successful offensive drive.

Central Arkansaas quarterback Will McElvain completed 4 of 8 passes for 63 yards and capped the drive with a 12-yard quarterback draw for a touchdown, cutting the deficit to 20-7.

In his first start for the Bears, McElvain was 18 of 31 for 173 yards with 1 touchdown and 2 interceptions.

In the second half, Missouri State was able to hone in on getting to McElvain and disregard UCA’s rushing game that compiled 210 yards.

“Will, when he has time and a chance to step into his some throws, he’s got a chance to be pretty special,” Brown said. “I think he’d be the first to tell you he wants some throws back.”

After UCA’s score, Missouri State Montrae Braswell returned the ensuing kickoff 98 yards for a touchdown to make the score 27-7.

“At times we looked like a really good football team and then at times we didn’t. We looked unorganized and I was disappointed with some of our breakdowns on special teams,” Brown said. “The kick return, that was kind of a back-breaker after we had some momentum.

With 10:04 left, Booker fumbled at his 13, giving UCA one of its best scoring opportunities of the game.

Two plays later, McElvain rolled out and found a wide open Myles Butler for a touchdown, making the score 27-14.

UCA was given one last hope when Missouri State missed a field-goal attempt with 4:03 left. But the drive stalled at Missouri State’s 31, leaving it to run out the remainder of the clock. 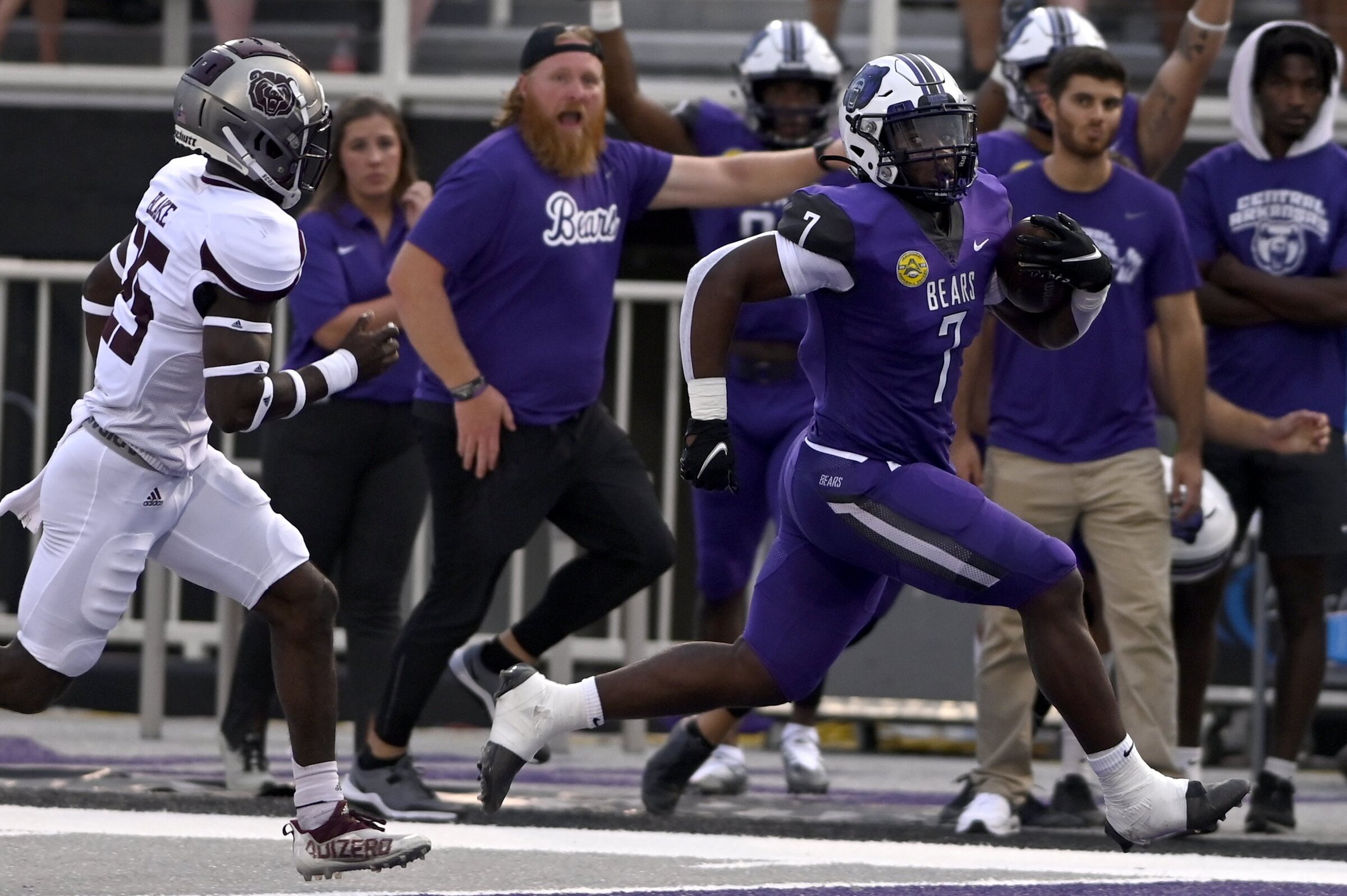 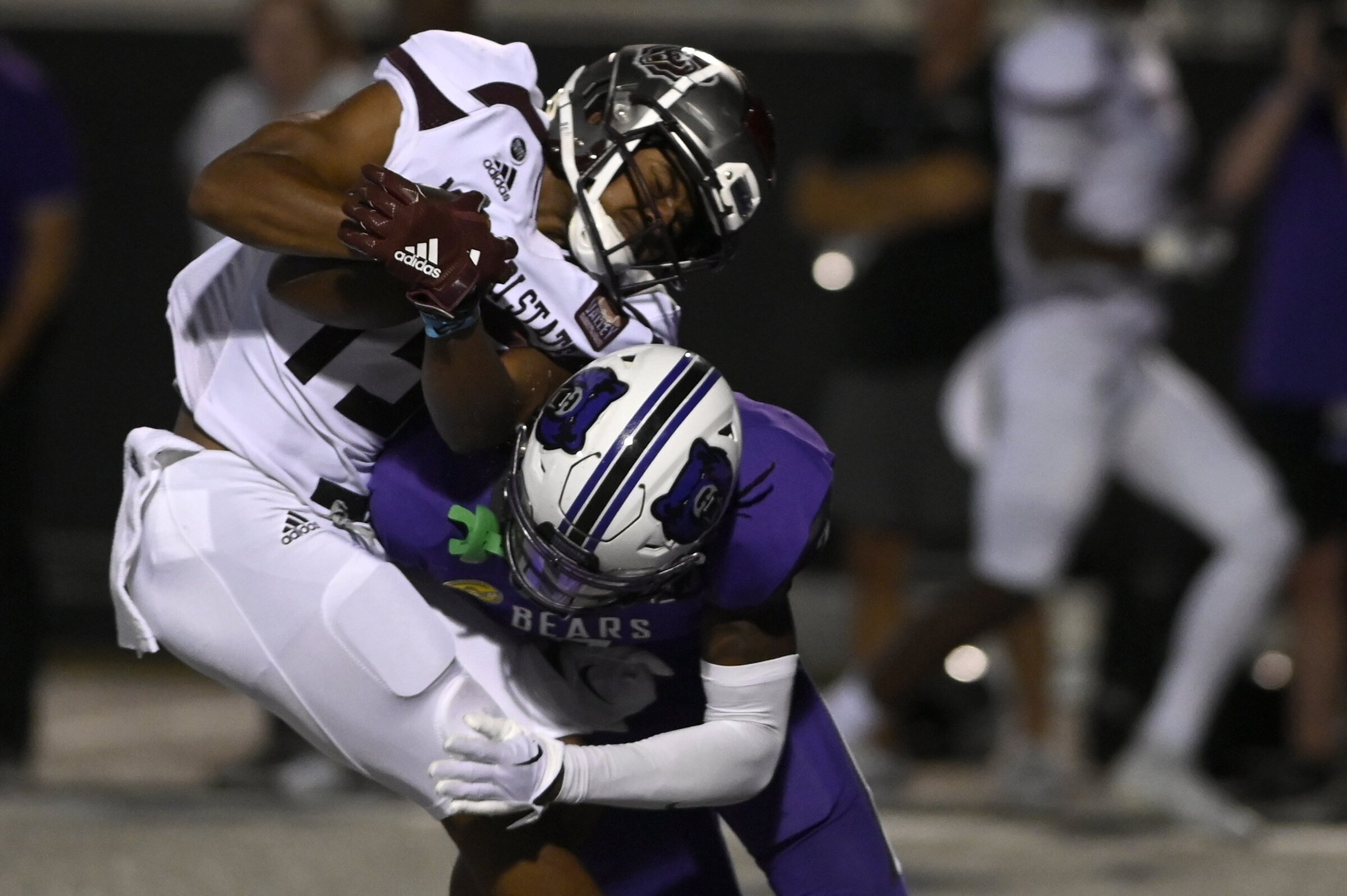