In a cover story for last Sunday's Perspective section, I wrote about Ed Cromwell, a Princeton graduate who came to Arkansas as an architect for the federal Resettlement Administration and stayed here until his death in 2001. Cromwell, as talented an architect as this state has ever known, was famous for his historic preservation work.

The focus of the story was on his namesake firm's (Cromwell Architects Engineers) revitalization of an old Little Rock neighborhood now dubbed East Village. Among Cromwell's loves were the Arkansas Territorial Restoration (now the Historic Arkansas Museum) and Capital Hotel.

Cromwell chaired the commission overseeing the Arkansas Territorial Restoration for more than two decades, and he led the way in the early 1980s when the Capital was renovated into one of the finest hotels in the South.

I've come up with what I consider the perfect way to honor Cromwell's vision for Arkansas. Start with breakfast in the dining room of the Capital. Walk several blocks from there to HAM and spend at least three hours. Return to the hotel for a late lunch at the Capital Bar & Grill.

Both places have fascinating histories. Construction on what later became the Capital began in the spring of 1872. The Denckla Block was built to house shops, offices and apartments for businessmen. Little Rock was growing quickly in the years after the Civil War. A New York railroad magnate named William Denckla saw an opportunity to make money in the former Confederate state.

"Denckla purchased land on which to build from an Arkansas Supreme Court justice, George Watkins," Sharolyn Jones-Taylor writes for the Central Arkansas Library System's Encyclopedia of Arkansas. "After Watkins' death in 1872, just as the building was nearing completion, Denckla sold the complex of stores, offices and what were known as bachelors' quarters back to the judge's heirs. It lay diagonally across from the Metropolitan Hotel and directly across from Little Rock City Hall.

"One of the most notable features is the prefabricated cast-iron facade that's part of the original construction (though it has been added to since). This architectural detail was built out of state--where is not known--and shipped to Arkansas. The building was designed and constructed to accommodate the facade, which isn't only decorative but a vital structural element as well."

The Metropolitan Hotel burned in December 1876. Hotel manager A.G. DeShon leased the Denckla Block for a new hotel. When asked to suggest a name, one Little Rock resident supposedly said the hotel would be a "capital enterprise located in a capital building in the capital of the state." In January 1877, the Capital Hotel opened.

"The hotel hosted notable political and historical figures, including President U.S. Grant," Jones-Taylor writes. "Legend says the Capital's unusually large elevator was built to allow Grant to take his horse to his hotel room. This is false. The large elevator was added during renovation in the 1980s. During the next century, the hotel changed hands several times. It was closed, renovated (with architect George Mann doing the design) and reopened in 1908.

"During the 1960s and 1970s, downtown Little Rock declined. The Capital fell into disrepair. In the early 1980s, Cromwell joined with a group of investors to restore the hotel to its former grandeur. The doors opened again just before Christmas 1983. Another renovation project closed the hotel for two years. It reopened for business in November 2007."

Meanwhile, what's now HAM opened in 1941 as the Arkansas Territorial Capitol Restoration. It was the first state-supported history museum in Arkansas. It consisted of a half-block of historic homes. In 1981, it became the first history museum in the state accredited by the American Association of Museums.

"Pioneering preservationist Louise Loughborough founded the museum in 1939," writes Bill Worthen of Little Rock, who headed the museum for many years. "Loughborough knew of historic houses on the east half of Block 32. Those included the Hinderliter House, thought to be the meeting place of the last territorial assembly. She called it the 'territorial capitol.'

"Loughborough described Little Rock as the 'town of three capitols' as part of the public relations campaign for the museum. The Hinderliter was built in 1827 as a grog shop by Jesse Hinderliter. When the city threatened to condemn these houses, Loughborough began a campaign to save them, garnering the support of the state, the federal Works Progress Administration and private sources."

In 1939, the Legislature created the Arkansas Territorial Capitol Restoration Commission and named Loughborough to head it. With the help of architect Max Mayer, she set about restoring the houses and placing them in a park-like setting. The museum opened in July 1941. It featured the Hinderliter House and three structures named after Arkansas pioneers Charles Fenton Mercer Noland, William Woodruff and Elias Conway.

A new museum center doubled the size of the previous reception center with 10,000 square feet of exhibition space, a theater, offices, a gift shop and an entrance atrium. A reconstruction of the 1823 Woodruff print shop (Woodruff founded the Arkansas Gazette at Arkansas Post in 1819 and moved the newspaper to Little Rock in 1821) opened in 2010. 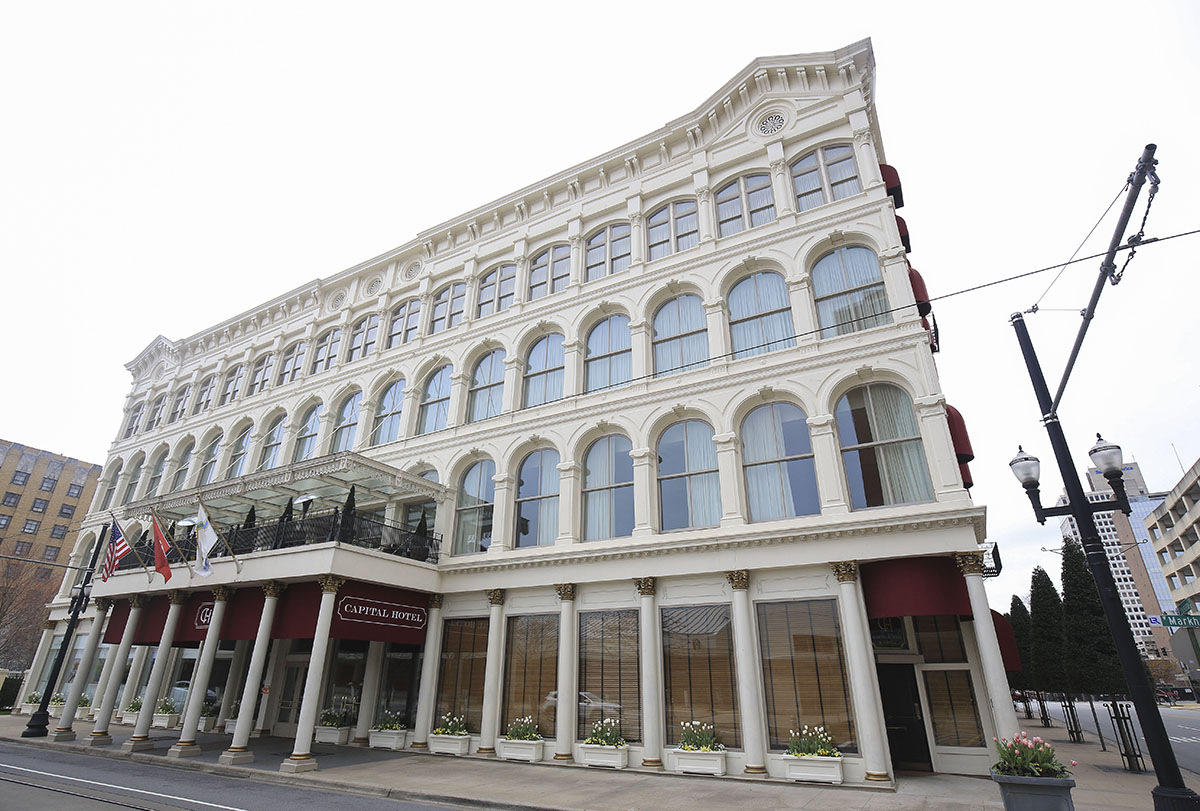