Degree among programs, projects approved by trustees by Ryan Anderson | September 3, 2022 at 9:16 a.m. 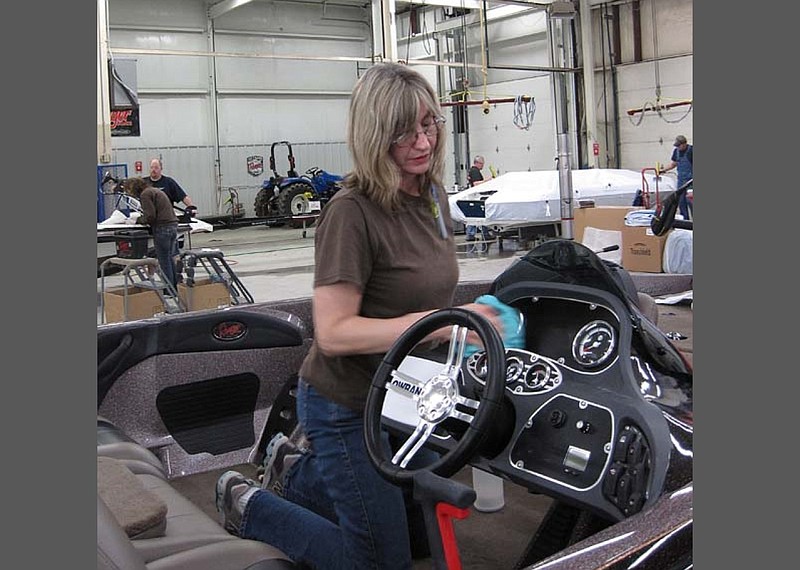 Lora Shockley of Flippin details a fiberglass bass fishing boat made by her employer, Ranger Boats of Flippin, in this 2010 file photo. Ranger Boats is located about 15 miles west of Arkansas State University-Mountain Home, which has been approved to offer a degree and certificates in boat manufacturing by the ASU System board of trustees. (Arkansas Democrat-Gazette file photo)

Work is scheduled to begin Oct. 1, and finish Aug. 1, 2023, on an expansion of ASU-Mountain Home's technical center to accommodate a new boat manufacturing program, as well as the addition of injection molding and extrusion technologies to the mechatronics program, according to the ASU System. The $1.385 million project will be funded by a $685,000 grant from the Office of Skills Development and a $700,000 Regional Workforce grant from the Arkansas Division of Higher Education.

The Twin Lakes region, where ASU-Mountain Home is located, hosts four boat manufacturing companies that employ approximately 2,000 workers, and the university has collaborated with those businesses to design these new programs so that individuals will be prepared for the workforce, according to the ASU System.

A $200,000 Delta Regional Authority grant has been awarded to support the development of the program and the faculty position for two years, while an Office of Skills Development grant for $1,234,775 has been awarded to support the expansion of the technical center, its equipment purchases, and an additional year of faculty salary for the program, so no additional funding is required from the university or system.

"This is major boat manufacturing country," said Chuck Welch, president of the ASU System. Each year, "$5 million in boat products are produced here, [which means] plenty of jobs."

The seven-credit-hour commercial truck driving course will meet all requirements for certification as a commercial truck driver and be accepted as an elective in the Technical Certificate in General Business, according to the ASU System. ASU-Mountain Home has been awarded a $500,000 Regional Workforce Grant to establish the training program and purchase a semi, trailer, and truck simulator, so no additional funding is required.

"Truck driving is a major need in this state and country," Welch said.

ASU-Mountain Home has also added athletics -- baseball, softball, cross country, and Esports -- this fall, which has increased school spirit and student opportunities on campus, said Chancellor Robin Myers. "We have 56 student-athletes this fall, and we're very excited about -- and supportive of -- this new venture on campus" for the Trailblazers.

Trustees unanimously approved renovations to Henderson State's Caddo Center, making it a "one-stop shop" for many student needs, including offices for admissions, financial aid, housing, and advising and tutoring, according to the ASU System.

The project received a $1.2 million grant for its initial phase in fiscal year 2022, which was approved by the trustees in September 2021. The second phase will be funded by a $1.4 million Arkansas Natural and Cultural Resources Commission grant.

The second phase also includes adapting the shell of the Caddo Building, allowing for preservation of the historic Caddo Center, according to the ASU System. Phase one started in September 2021, and phase two is scheduled for completion June 30, 2023.

Arkansas State Online degree programs had been exempted from employee tuition discounts, but that exemption is now removed after unanimous approval of the trustees Friday. The change is effective with this fall's semester, although discounts for ASO degree programs remain limited to only employees.

In addition, the emeritus status process, which has been managed through the office of the system president, will be managed by the chancellor of each individual campus, effective immediately, according to the system. Since the emeritus policy was adopted in 1997, the system has grown to seven schools.

"All faculty and staff members, with academic rank and who have rendered 10 or more years of full-time service to an Arkansas State University system institution at the time of their retirement, and who are in good standing, are declared to have, and shall have, emeritus status, with special gratitude and honor granted from the board of trustees and the system president, with all the privileges, which the administration may bestow at its discretion," according to the ASU System.

Trustees unanimously approved the contract of Akansas State's new chancellor, Todd Shields, effective Aug. 15, at an annual salary of $450,000. Shields, who was dean of the Fulbright College of Arts and Sciences at the University of Arkansas, Fayetteville, since 2014, was officially hired in July to replace Kelly Damphousse, who resigned.

Trustees also voted Friday to allow Arkansas State University to sell 30 acres of undeveloped land the school owns in Jonesboro, as it's "not essential to the operations of the institution and will not be needed in the future to carry out the mission of the educational institution," according to the ASU System. The acreage, between Browns Lane and Race Street, will be surveyed by an appraiser, then advertised for sale to the public.

There is "possible interest from the City of Jonesboro to buy the land and use it for a sports facility," Welch said. It's likely whatever money the university receives from the sale will be "set aside for future strategic projects."

The resolution was adopted unanimously, although Trustee Jerry Morgan recused himself because of his role as chairman of the Jonesboro Advertising and Promotions Commission.

The amended agreement calls for enhanced communication between the two campuses and allows the Jonesboro campus annual approval of the Queretaro campus budget, according to the ASU System. Beginning with the current school year, total tuition generated by the Queretaro campus shall be calculated based on all student credit hours; in the initial agreement, the relevant calculation was based on 95% of student credit hours.

Starting Friday, room 224 in the business building of the Neil Griffin College of Business on Arkansas State's Jonesboro campus is renamed the FORVIS AIS (Accounting Information Services) Lab, after the trustees unanimously approved the resolution because of the company's contributions to the lab -- and the school in general -- as well as its continued employment of many Arkansas State graduates.

Also effective Friday, the dining hall at Henderson State will be named for Malachi Smith, following unanimous approval of the trustees.

Smith became the head cook at the college in 1903, and after a 1914 fire destroyed much of the Henderson-Brown campus, Smith and his kitchen staff contributed $25 to rebuild the college, "an immense amount of money at the time," according to the ASU System. He remained "a respected fixture" on campus until his 1947 retirement.

Smith is "a legendary figure on campus because of the spirit he displayed after that fire," and his family has remained involved with the university, including through scholarship awards, Welch said. "I believe it's the first building to be named after a [Black] person on that campus."

It is "a wonderful story," said Trustee Paul Rowton of Harrisburg.

Trustees also approved Arkansas State University-Mid-South's 2022-25 strategic plan, the culmination of an 18-month process. Tenets of the strategic plan include: relevant, accessible, high-quality education; success through responsiveness; community and workforce development; and fostering a culture of growth and engagement.

Since 2015, ASU-Mid-South has improved its graduation from 9% to 33%, which is "on par with most community colleges in the state of Arkansas, [but] we still have a ways to go to get where we want to be," said Chancellor Debra West. The school has improved student outcomes in several ways, including ending late enrollment -- "many of those students are not prepared" for college -- and boosting "wraparound services, [like] advising."