Bennett, Georgia start with a romp 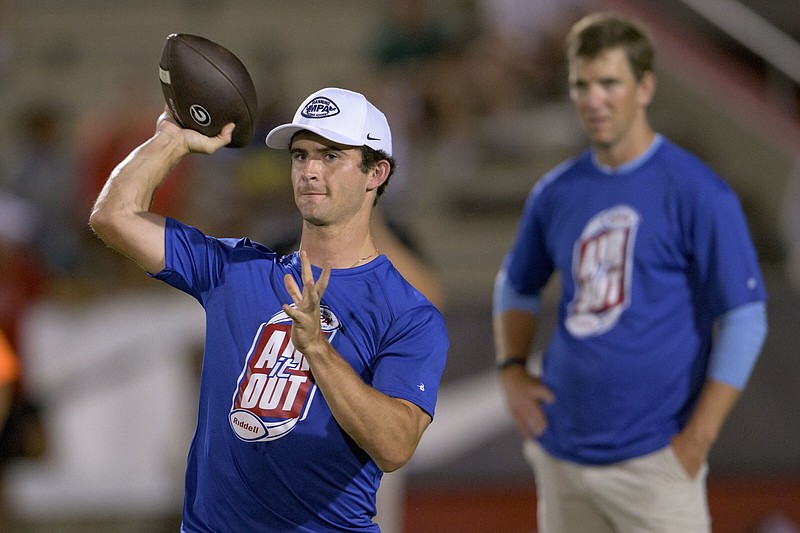 ATLANTA -- Stetson Bennett and the Georgia defense picked up where they left off in last year's national championship game, even with a bunch of their former teammates now playing in the NFL.

Bennett threw for 368 yards and accounted for three touchdowns, a revamped defense didn't miss a beat, and the No. 3 Bulldogs looked very much like a champion intent on repeating with a 49-3 rout of No. 11 Oregon on Saturday.

Bennett completed 25-of-31 passes with two touchdowns and ran for another score in the season opener before calling it a day in the third quarter. By that point, Georgia led 42-3 and had thoroughly ruined the debut of Oregon Coach Dan Lanning.

Georgia really opened it up on offense, throwing 37 times for 439 yards.

"I think when you watch what they did today, if you're watching from home, you're saying, 'Man, I'd love to come play in that offense,' " Coach Kirby Smart said.

After spending the last three years as Georgia's co-defensive coordinator, Lanning got a look at his former team from the opposing sideline in a game played before a predominantly red-clad crowd at the home of the NFL's Atlanta Falcons.

He saw just how far the Ducks have to go.

"That locker room is hurting a little bit," Lanning said. "But they're ready to grow."

Bennett, the former walk-on who led a storybook run to Georgia's first national title since 1980, returned for a sixth college season with a firm grip on the starting job after battling for playing time most of his career.

Bennett was the offensive MVP of both Georgia victories in last year's College Football Playoff.

He started his final season with a career high for passing yards.

"It's always good to go in being the guy," Bennett said. "It was pretty cool."

He guided the Bulldogs to the end zone on all six possessions he played. He ran for a 1-yard score and tossed TD passes of 4 yards to Ladd McConkey -- spinning away from a pass rusher who appeared to have him corralled -- and 18 yards to Adonai Mitchell.

There were some questions about the Georgia defense, which had five players off the 2021 unit selected in the first round of the NFL Draft.

Any doubts were quickly put to rest by a swarming group that looked very much like last year's defense for the ages, making life miserable for new Oregon quarterback Bo Nix.

"One of our mottos is, 'No one in our end zone,' " said Christopher Smith, who had one of Georgia's two interceptions.

Nix transferred to Eugene after starting at Auburn the last three seasons. He immediately found himself facing a team he lost to three times while playing in the SEC.

Nix's frustration was evident when he buried his helmet in his hands after a false-start penalty.

Georgia's day was epitomized by a short pass to Darnell Washington that turned into a big gain when the 6-7, 270-pound tight end shrugged off one defender hitting him high and hurdled another who tried to bring him down low.

Despite his poor showing, Nix has a solid grasp on the Oregon quarterback job.

Nix completed 21 of 37 for just 173 yards, and his second interception -- the one picked off by Smith -- was an especially poor decision.

"He forced a throw he didn't need to force," Lanning said. "Bo knows that."

Even though he didn't name a stating quarterback leading up to the game, Lanning never considered giving someone else a shot.

Nix is still No. 1 on the depth chart.

"He's our quarterback," Lanning said. "He did a a good job handling some adverse situations. Now he's got to figure out how he can improve." 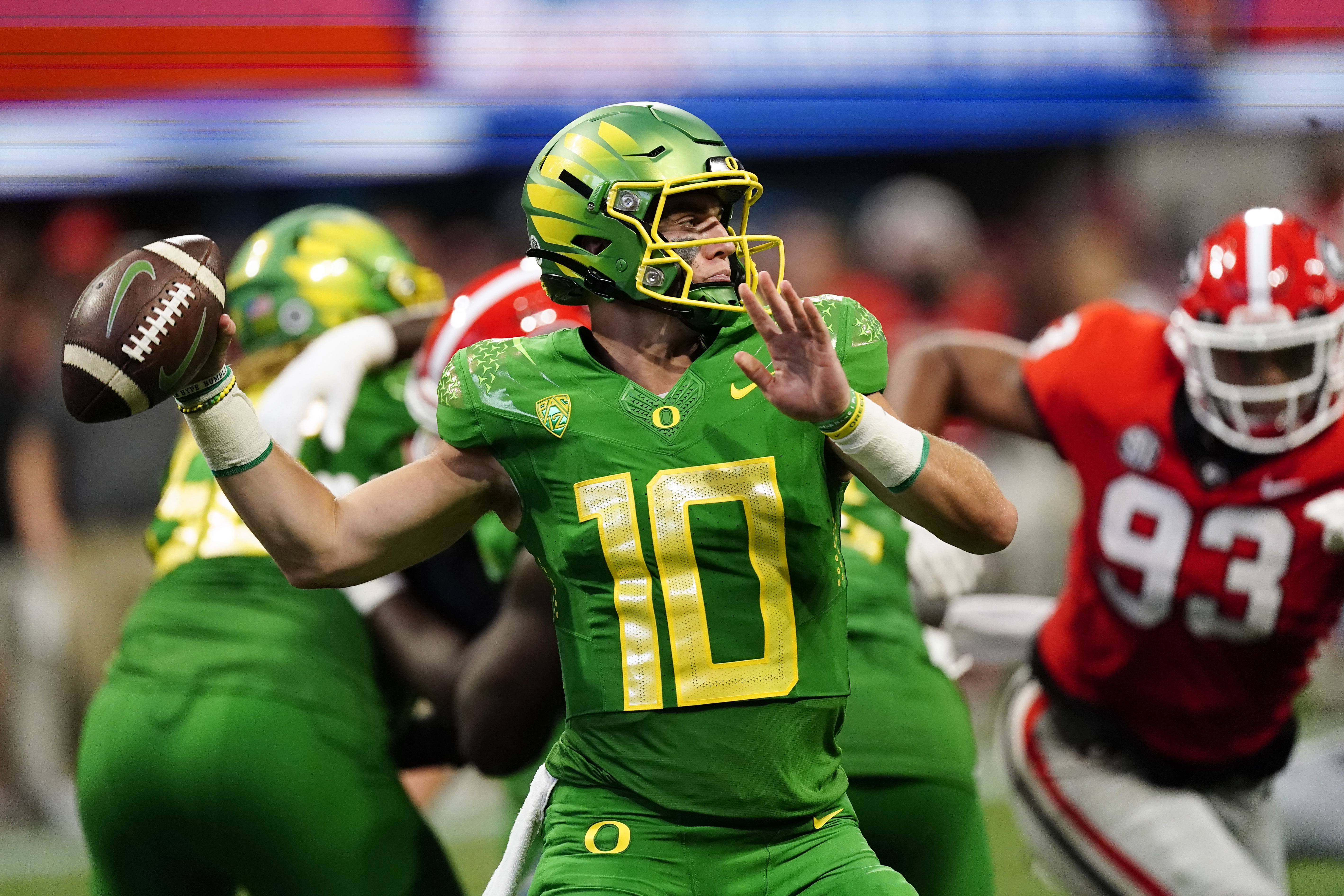 Oregon quarterback Bo Nix (10) throws from the pocket in the second half of an NCAA college football game against Georgia, Saturday, Sept. 3, 2022, in Atlanta. (AP Photo/John Bazemore) 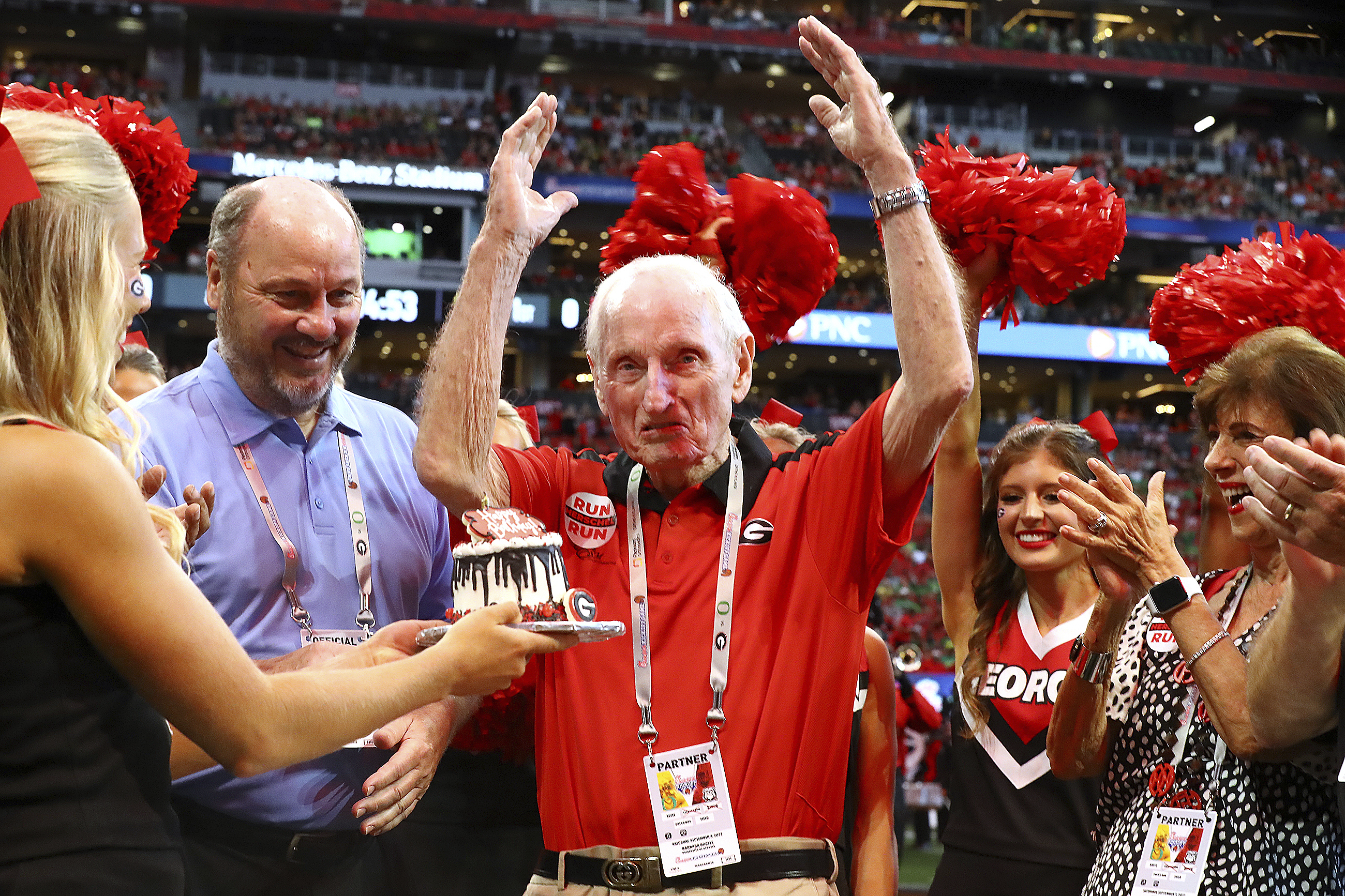 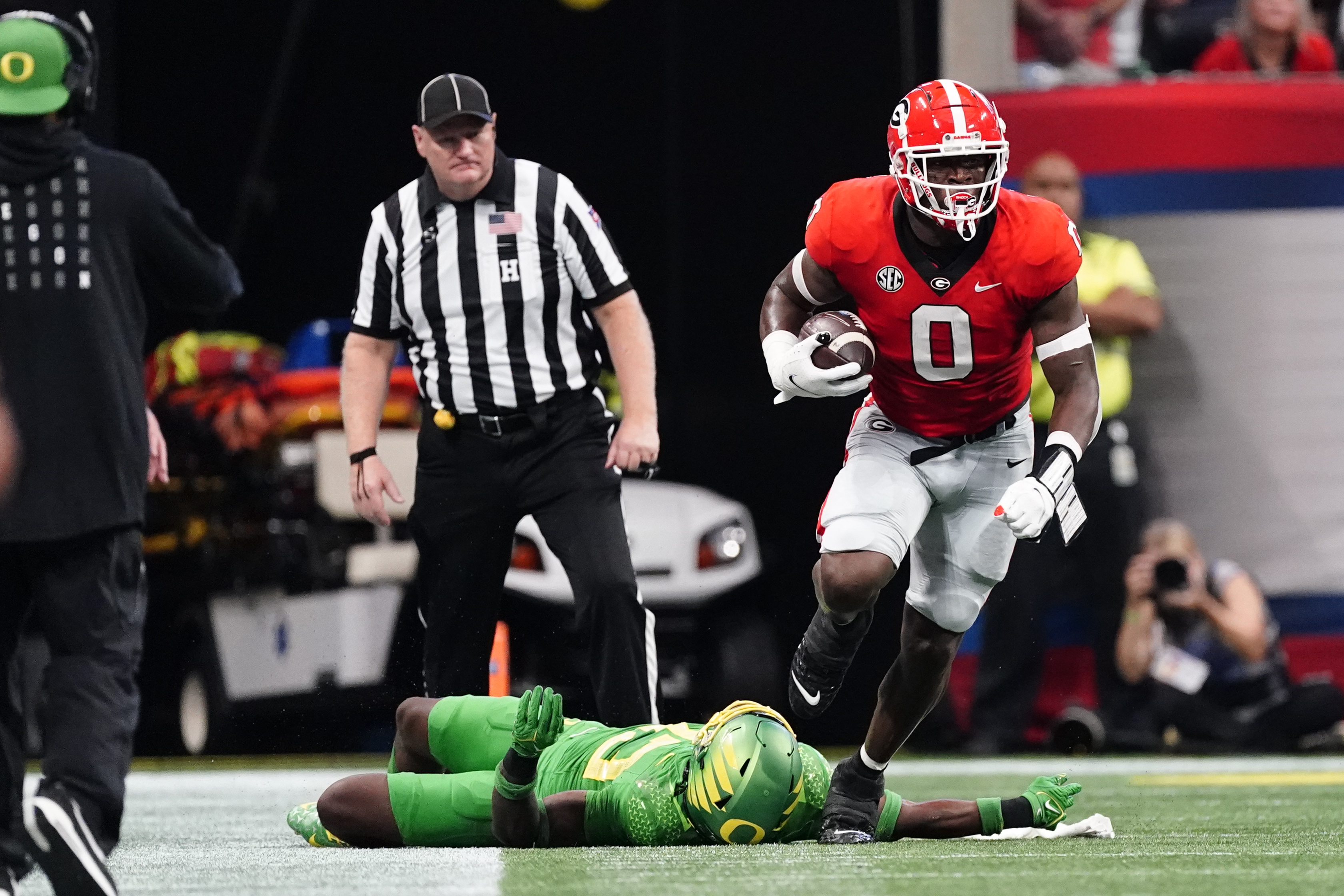 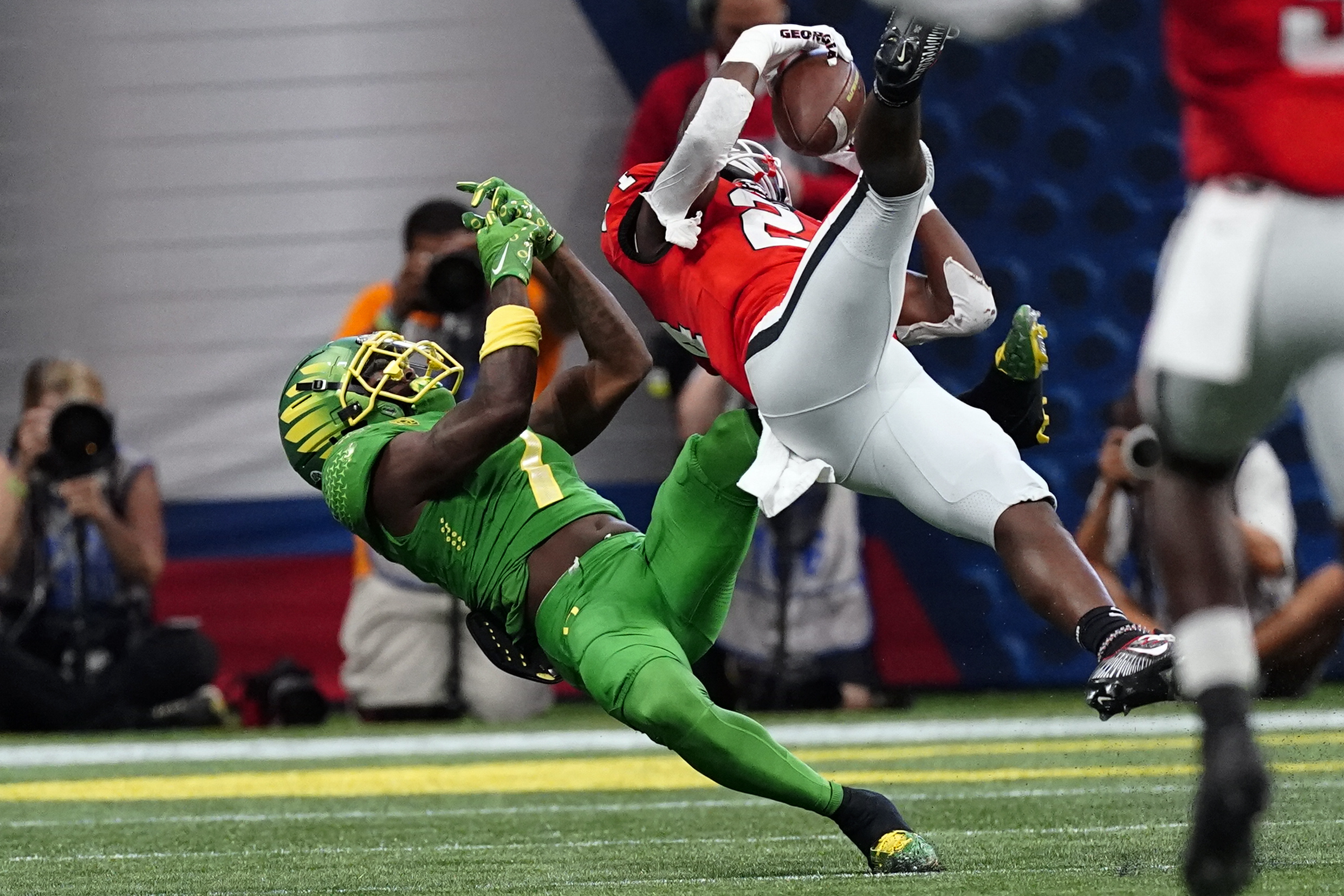 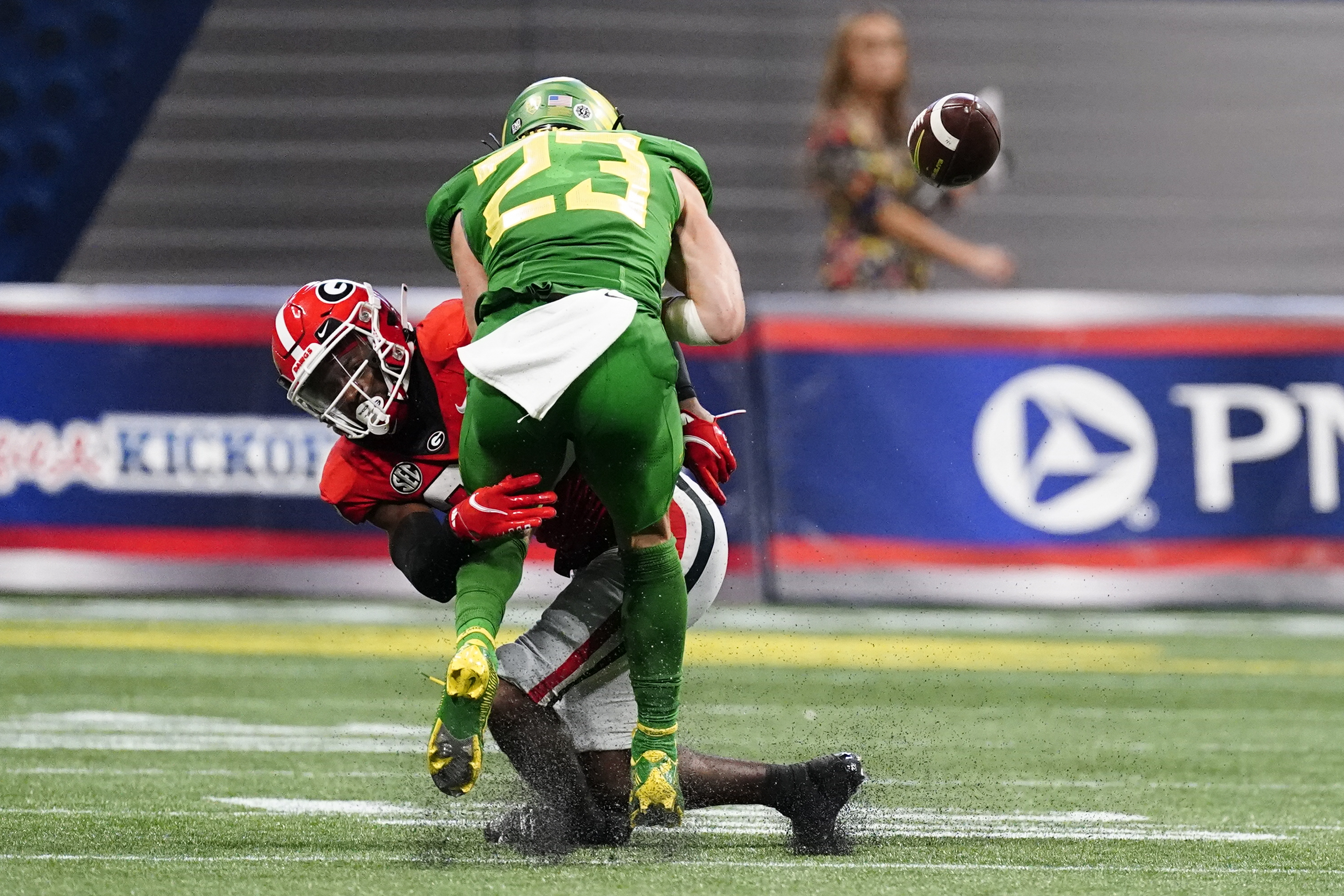 Georgia defensive back Christopher Smith breaks up a pass intended for Oregon wide receiver Chase Cota (23) during the second half of an NCAA college football game Saturday, Sept. 3, 2022, in Atlanta. (AP Photo/John Bazemore) 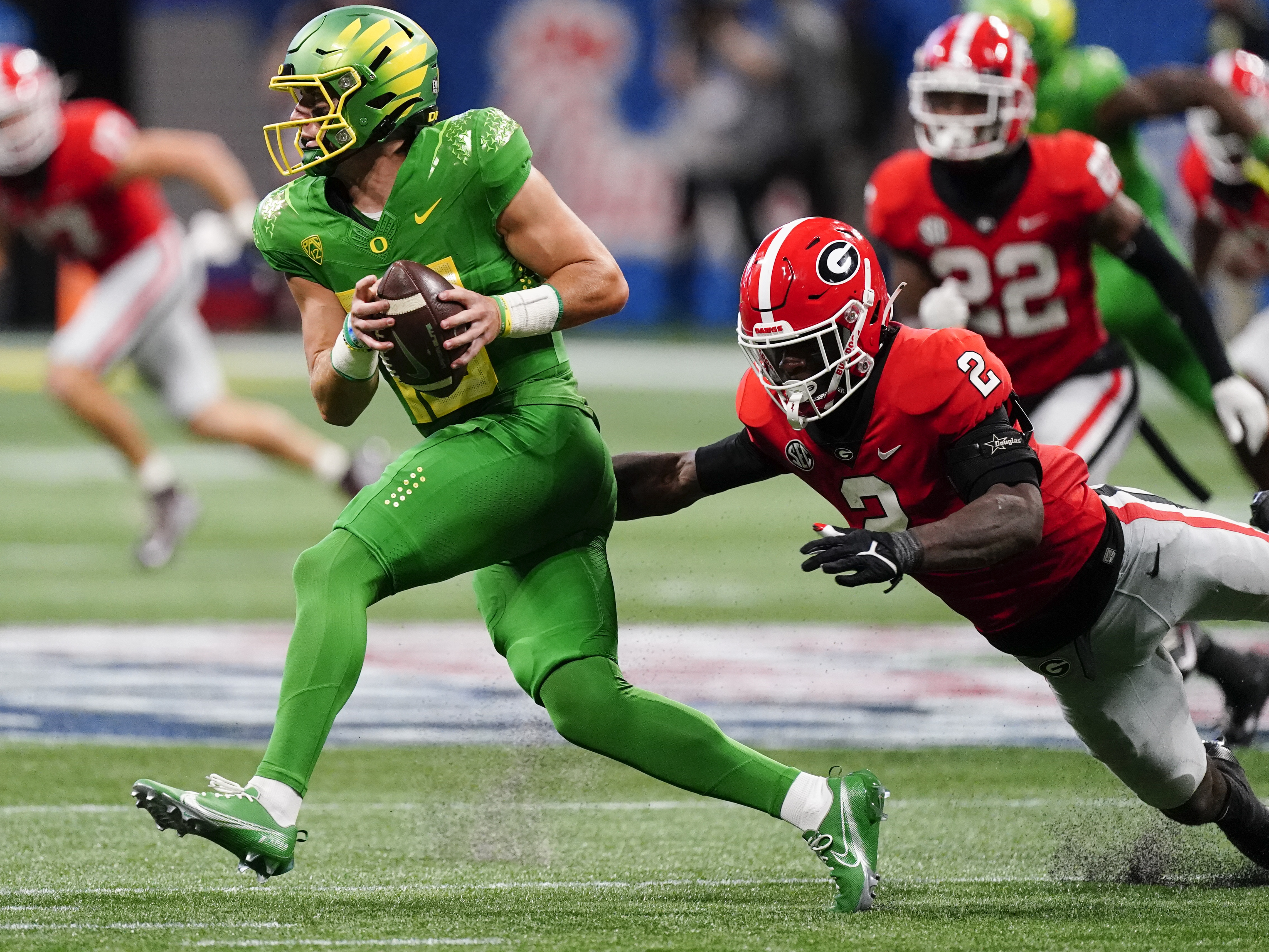 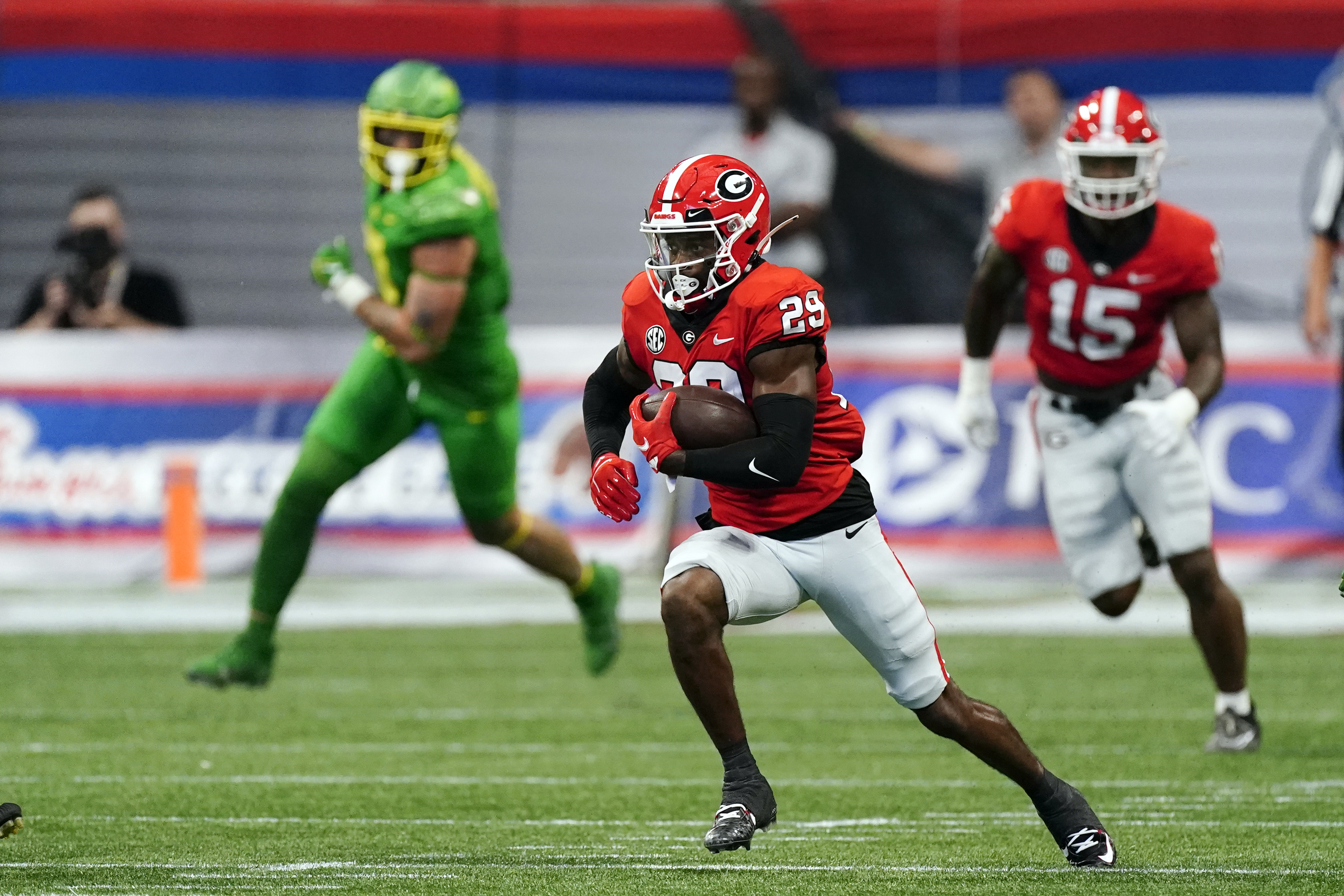 Georgia defensive back Christopher Smith (29) runs the ball after an interception in the first half of an NCAA college football game against Oregon, Saturday, Sept. 3, 2022, in Atlanta. (AP Photo/John Bazemore) 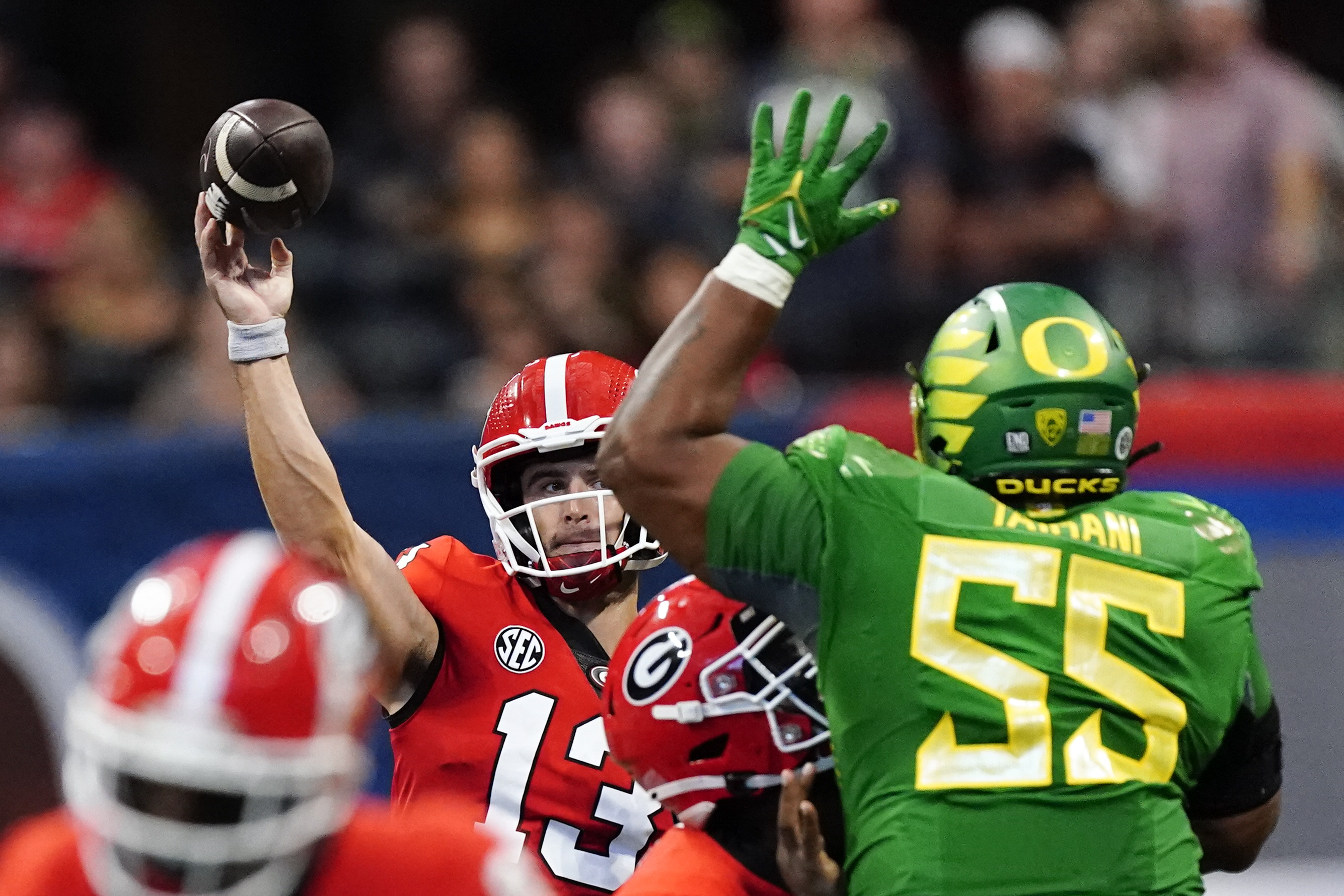 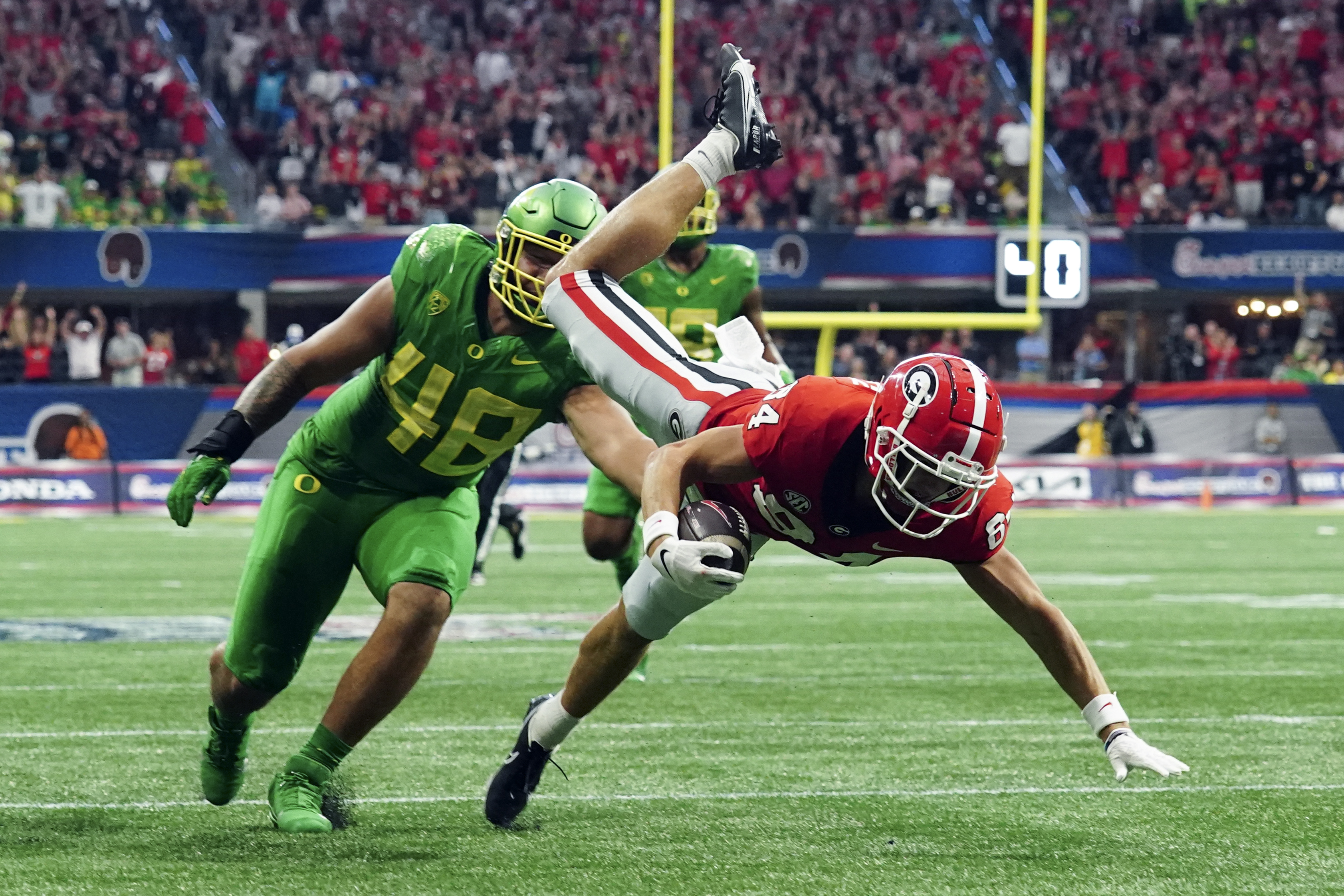 Georgia wide receiver Ladd McConkey (84) is defended by Oregon defensive lineman Treven Ma'ae (48) as he dives for the goal line after a catch in the first half of an NCAA college football game Saturday, Sept. 3, 2022, in Atlanta. McConkey didn't not score on the play. (AP Photo/John Bazemore) 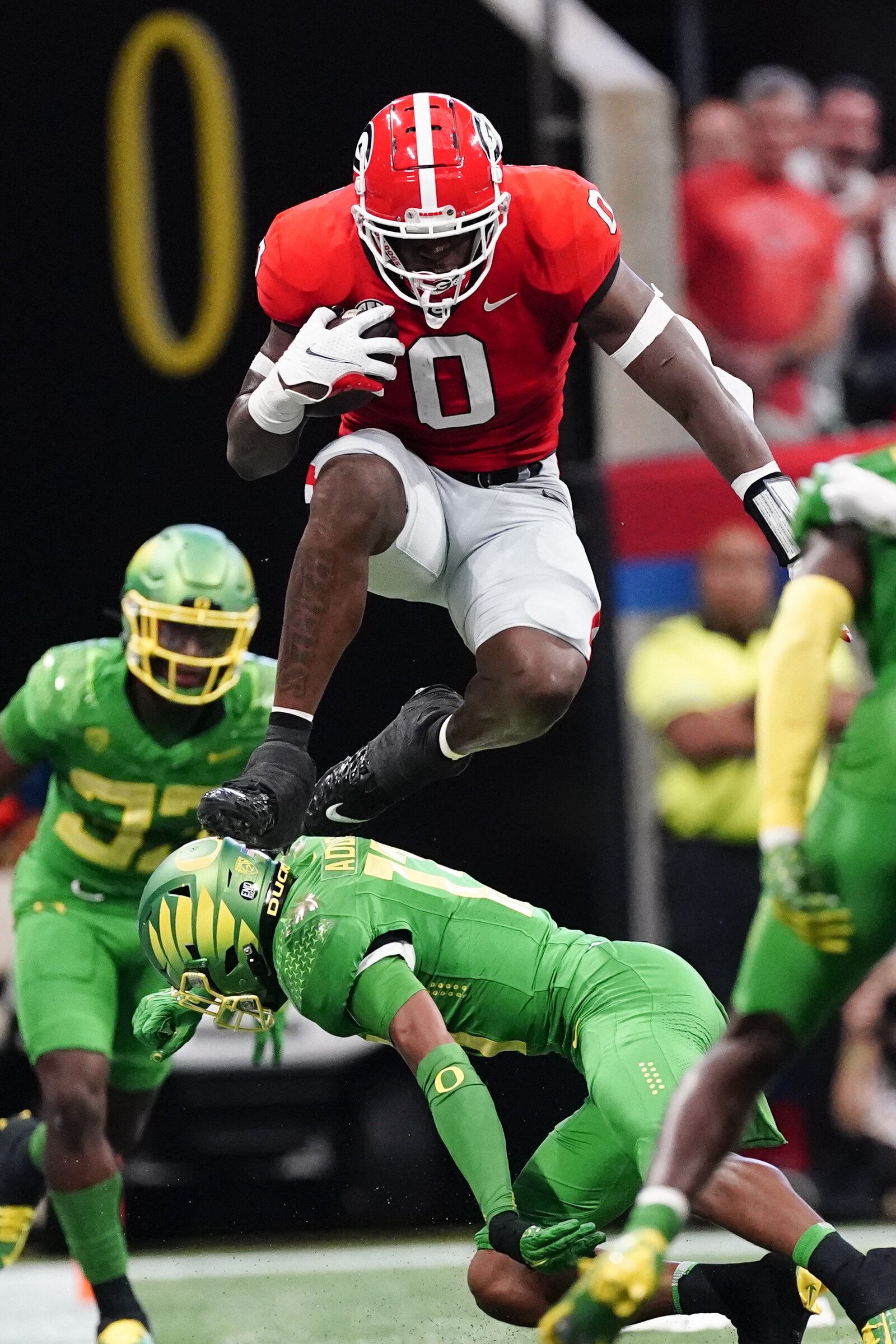 Georgia tight end Darnell Washington hurdles Oregon defensive back Bryan Addison during the first half Saturday at Mercedes-Benz Stadium in Atlanta. The defending national champion and third-ranked Bulldogs routed the No. 11 Ducks 49-3 in a SEC/Pacific-12 Conference matchup. More photos at arkansasonline.com/94ouuga/ (AP/John Bazemore)