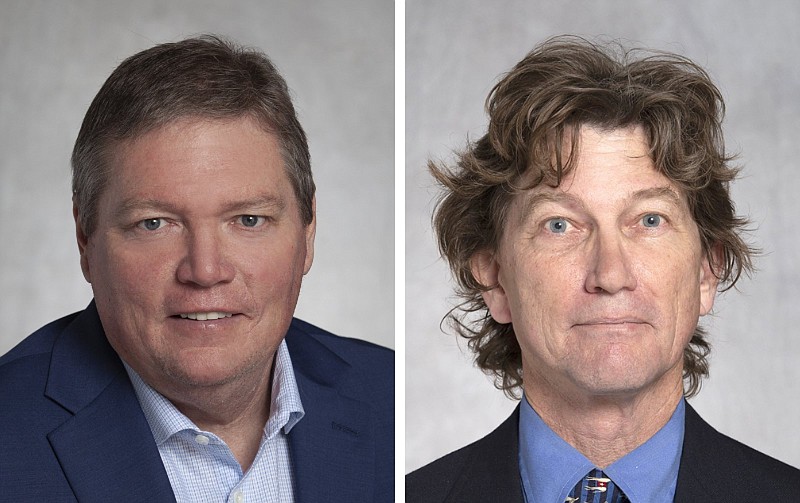 Bryan King (left), a Green Forest Republican, and Jim Wallace, a Democrat from Eureka Springs, are both running to represent state Senate District 28 in the 2022 general election. The Northwest Arkansas district includes all of Madison and Carroll counties; most of Newton County; the western two-thirds of Boone County, including the city of Harrison; and portions of northern Franklin and Johnson counties. (Courtesy photos)

The two men seeking to represent state Senate District 28 both ran against state Sen. Bob Ballinger, R-Ozark, in 2018. Now they face each other in the Nov. 8 general election.

Bryan King of Green Forest won his Republican primary against Ballinger, the incumbent, in May. King is making a legislative comeback attempt. He was the incumbent senator who lost his 2018 primary to Ballinger.

This year's Democratic nominee is Jim Wallace of Eureka Springs, who was Ballinger's 2018 general election opponent.

The faces in the race may look familiar, but the district has changed. The state redrew legislative district boundaries after the 2020 U.S. census to equalize populations. District 28 includes all of Madison and Carroll counties; most of Newton County; the western two-thirds of Boone County, including the city of Harrison; and portions of northern Franklin and Johnson counties.

The district used to extend all the way from the Missouri border on the north to south of the Arkansas River in Sebastian County.

State senators normally serve four-year terms and receive a base salary of $44,357. The Senate has 35 members. Early voting begins Oct. 24.

Wallace garnered 29.1% of the vote in his 2018 race. Neither candidate in this year's race considers that result a serious indicator of what will happen this year, both said in interviews.

"When I first ran for the Legislature in 2006, the Democrats were as dominant as the Republicans are now," King said in a telephone interview. "So, I know it's difficult, but possible, to win a race while running uphill."

"I started out knowing I had to run hard to win, and I'll never be able to get out of that mindset," he said.

Defeat is a good teacher, Wallace said in his interview.

"I learned a lot in that race and now have some name recognition," Wallace said.

He also said Republicans are more fractured now than they were in 2018.

"There were five people in that primary," Wallace said of the Republican primary this year. "I think there's some frustration there."

King won the primary in a runoff.

King cited both his legislative experience, his emphasis on fighting corruption, and his livelihood as a farmer and rancher as advantages in the rural district.

Wallace said district residents have needs being ignored by state government while experienced lawmakers brag about a $1.6 billion surplus.

"Crime is an issue I hear a lot about" while campaigning, King said. "People are finding $400 or $500 worth of stuff missing more often, in places where you used to be able to leave your keys in your vehicle."

Another aspect of public safety for rural residents is a priority for Wallace, the Democrat said. He is a volunteer firefighter and medical first responder in the Inspiration Point Rural Fire Protection District. The equipment in his and other departments is getting so old it is difficult and expensive to get replacement parts, particularly for radios, he said. The average age of the volunteers is advancing, too, he said.